In between making costume pieces for my latest burlesque act, and actual burlesque classes, I found time to fit in a quick game of 'Spandau and Lewis' this afternoon. Once again I ran through the random threat generation system, and used the planes from one of my earlier games - a couple of DH2s, against some German two-seaters and a mix of Halberstadt DIIs and Fokker EIIs.

I played on a larger area, and used 4D6 as the distance from the encounter. I also tried a tweak to the critical hits - any hit scores a critical on a second D6 roll of 6+, with a +1 to the roll for each 6 rolled in the hits.

Here's the DH2s - one ace in the lead and a novice tagging along. 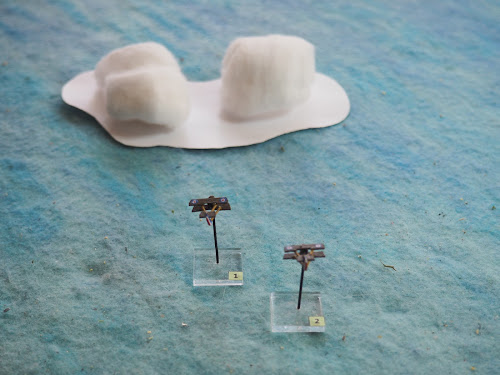 The system generated a few opponents straight away  a lone Fokker, a lone two-seater and a two-seater escorted by a Halberstadt. 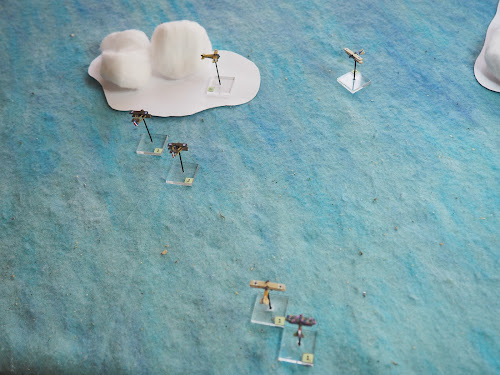 The DH2s took cover in a cloud until they could pick some suitable targets without being spotted. 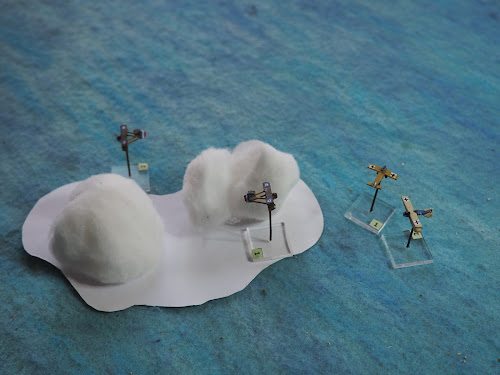 The lead DH2 sprung an ambush on the Fokker, but failed to score any hits. 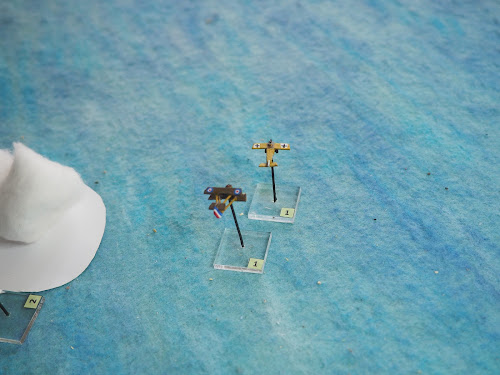 This attracted the attention of the Halberstadt escort, who moved up to attack. 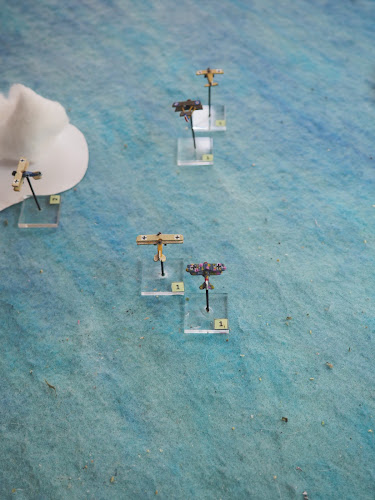 The DH2 pursued the Eindekker, but could't score a single hit on it. The Halberstadt was now closing up fast. 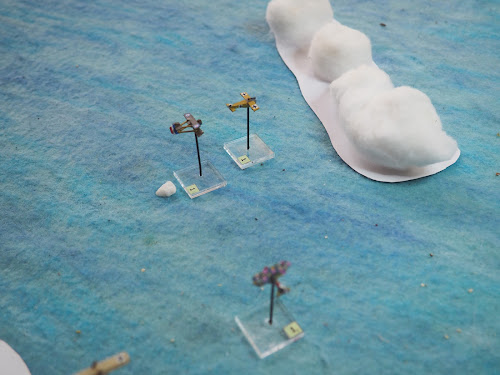 The Fokker took refuge in a cloud. The DH2 was now the prey ... 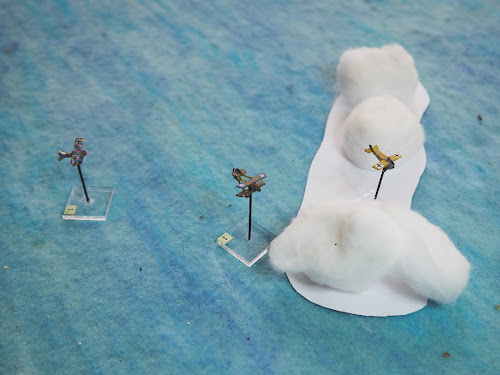 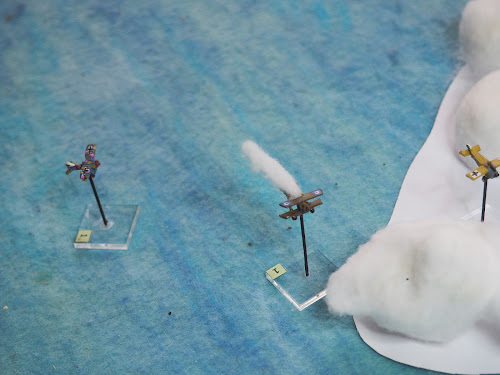 This now left the novice DH2, which had started stalking a two-seater, the target of all of the scouts on the table. A second Fokker had joined the fray, ad quickly spotted the lone British plane. A second Halberstadt was also patrolling, but hadn't seen anything. 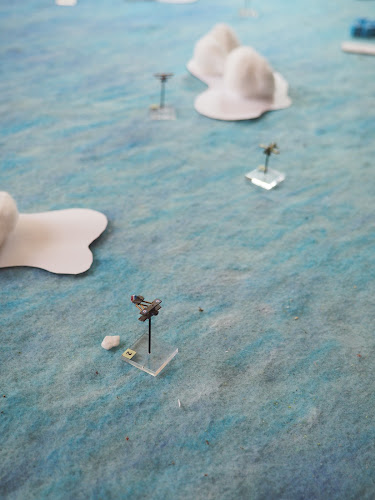 What's worse is that, by dint of good fortune for the Germans, one of the Fokkers, and the Halberstadt, were piloted by aces. The lone DH2 was in a lot of trouble. One Fokker pressed it close, whilst the Halberstadt moved in one an intercept course. The British pilot fled for home, but that board edge was still a long way away. 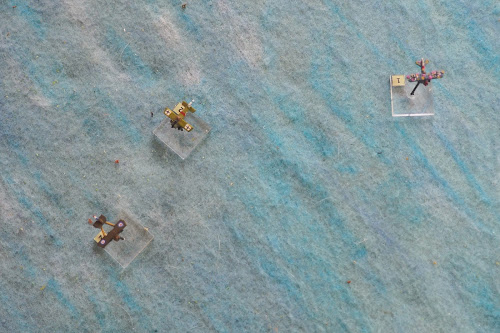 The British plane dodged and weaved, but was taking damage. 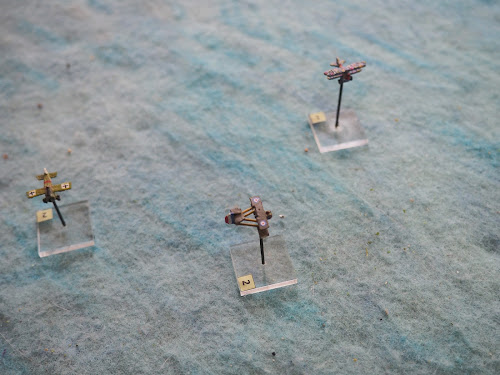 But somehow the Halberstadt pilot misjudged a turn and fund himself with the DH2 on his tail. He escaped serious damage, and evaded, but it was a hairy moment. One of the Fokkers scored another hit on the DH2, but it kept flying. 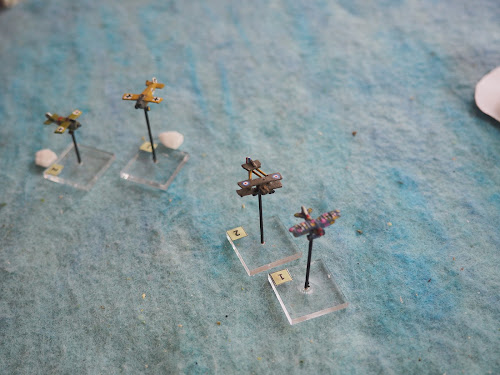 But the British plane was running for home now. A single long-range shot from a Fokker failed to score any damage, and the DH2 escaped. 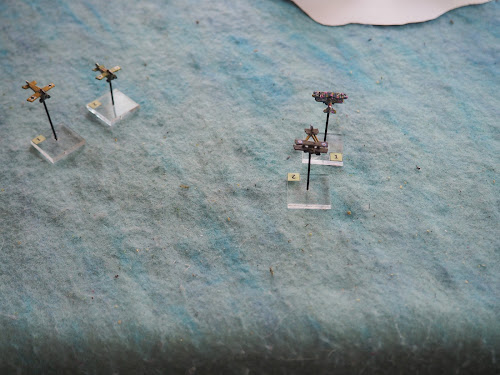 So on the whole not a successful outing for the British; an ace shot down and the second pilot home only by the skin of his teeth. The Germans got lucky with their aircraft, ending up with three scouts piloted by aces on the table (even if one never saw the fight). And the Germans all appearing over three consecutive turns made for a congested board on which the British were easily spotted. To make matters worse even with 4D6" as the distance, the contacts were relatively close to the patrolling DH2s. The British never really got to pick a decent target. The one Fokker they wet after seemed impossible to hit (needing a 5+ on a  D6, the British pilot managed one hit with eleven D6 rolls). But that's the way these random encounter things work - sometimes you have it easy and sometimes the cards are against you.