I tried another One Hour Wargame using my GNW figures this evening, with a random roll giving me the Bridgehead scenario.  For the rules I used my ECW Portable Wargame, treating all foot as shot units, but removing the +1 cavalry got for attacking foot with no pikes (on the assumption the units had pikes).
The Russians started with a unit across the river, whilst the Swedes would enter the board from various points. 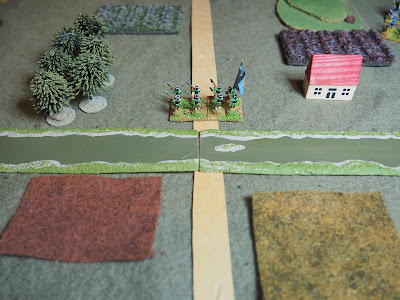 The first Swedish units came down the road - two units of horse. 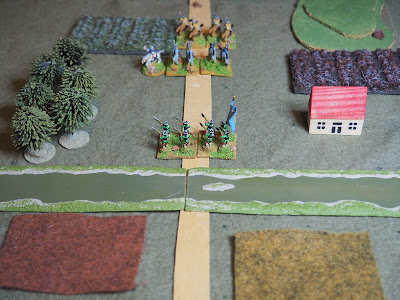 The moved quickly to surround the Russian infantry, putting it under serious pressure. 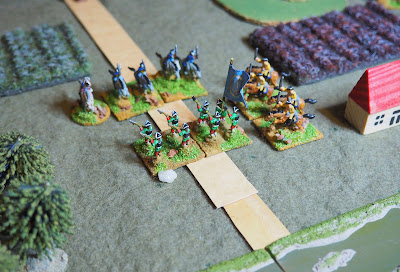 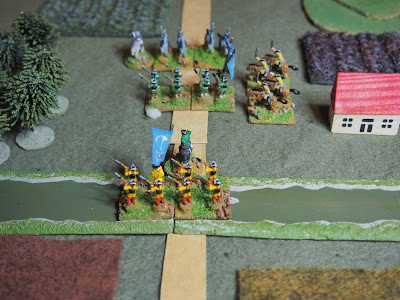 ... and engaging the Swedish cavalry. 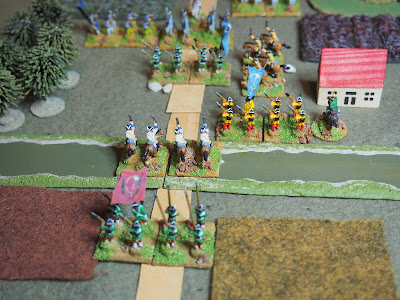 Swedish infantry was now coming up in support of their horse. The Russians extended their line to meet them, whilst throwing their horse in against their Swedish counterparts. 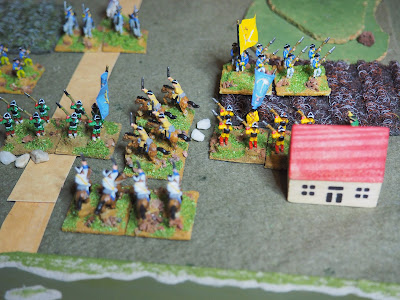 The Russian cavalry charge was a success, throwing back the Swedes and routing them. 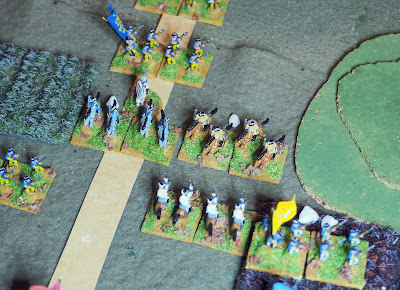 The Russians swung onto the flank of the second Swedish cavalry unit, and drove that back as well. 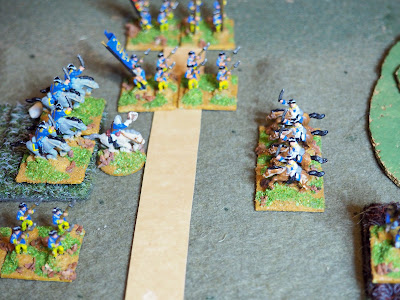 On the Russian right a Swedish unit was destroyed by a series of devastating volleys. 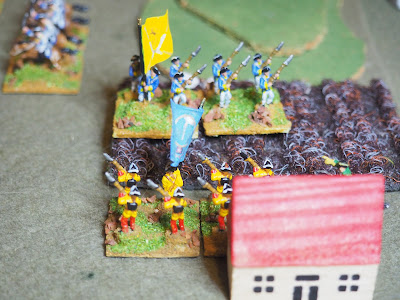 With Russian cavalry disrupting the Swedish deployment, the Russians had a turn or so to reorganise their line, and open up their bridgehead. 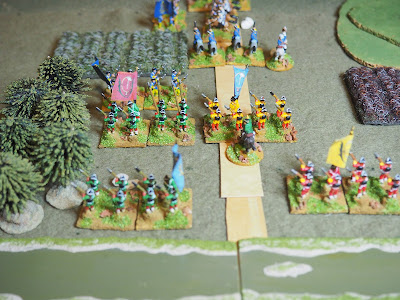 The Russian cavalry was quickly destroyed, and the Swedes rode their horse around the Russian right flank, driving it in. 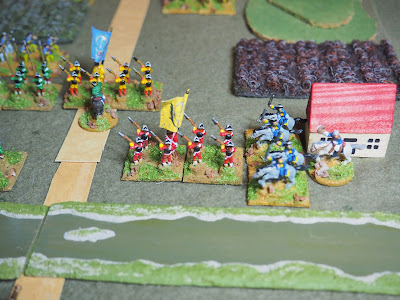 Since victory involved having no enemy units within close range of the ford, the Russians were now in trouble again. 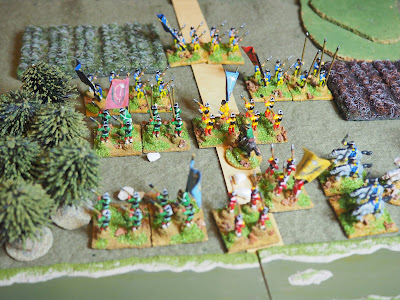 But their artillery saved the day, a lucky shot killing the Swedish commander. Another shot scattered the horse, saving the flank. 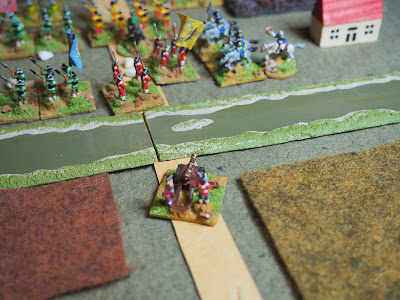 The Russians reorganised their line again, as the Swedish infantry prepared for a frontal assault. 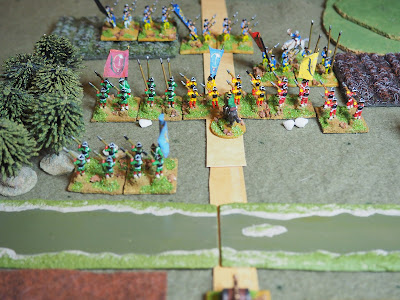 Another disaster for the Swedes! Their second-in-command, now in control of the army, was also killed, throwing the Swedes into disarray. 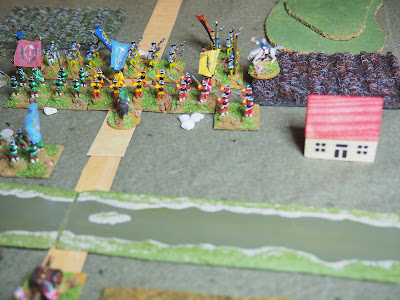 Both sides had now taken sufficient casualties that a break-test was required on each turn, but the Russians had the edge because they'd only lost one unit and were currently in control of the objective. 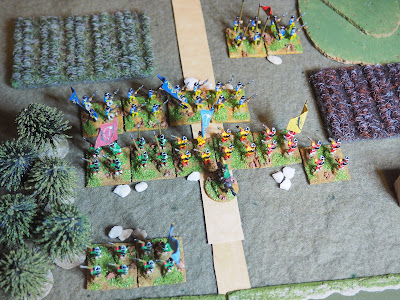 The Swedes could still pull off a win if they could avoid breaking, and eliminate the Russian advantages. 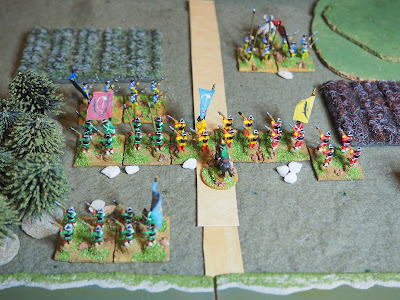 A lowly colonel, now in de facto command of the surviving Swedish troops, led his unit in a wild charge ... 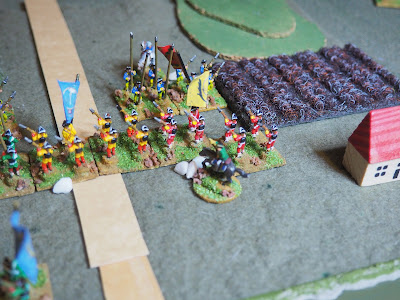 ... which broke the shaken Russian right flank, and swung into the centre, threatening the bridgehead. 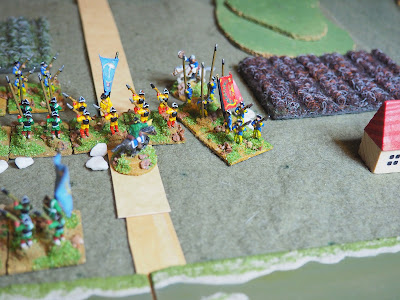 The Russians passed their next break-test. And the Swedes failed theirs, and fell back. The Russians had won. 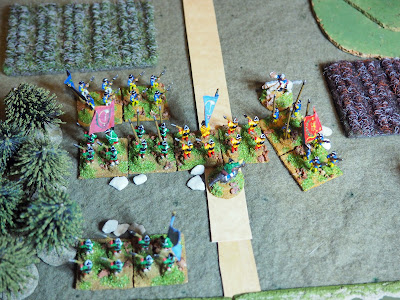 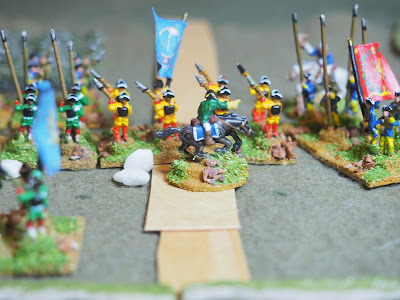 This was a to-and-fro action. At first the Swedes had the upper-hand, with their horse seriously threatening the Russian position. But the fierce attack by the Russian cavalry drove the Swedes back, buying the Russians time to get more units across the river and establish a defensive perimeter. The next Swedish attack broke up when their commanders were killed, and their third attack succeeded up until the point where the army's nerve failed. It probably didn't help that whilst there were three different entry points for the Swedish reinforcements, they all actually came on along the road, causing a minor traffic jam, just at the point when the Russian horse rode into their army's rear.
Posted by Kaptain Kobold at 20:50