Geoff and I played HOTT again last night, using 36AP armies on a normal-sized board.

He used his heroic Ancient Greeks in both games - lots of spears, a hero general and some Thracian warband. In the first game he fielded a mighty Hydra behemoth.

In the first game I used my Fishmen - again, lots of spears, but backed up with shooters, artillery, warband, a magician and a behemoth. 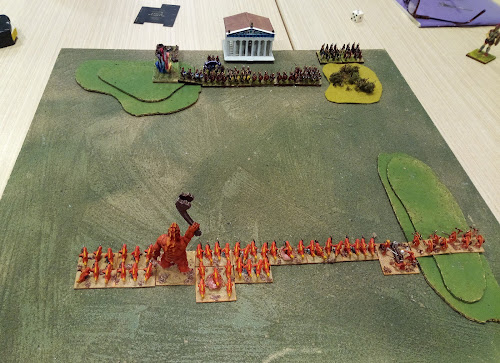 Our armies plodded towards each other. I was going for a win against Geoff's right flank, covered by the Hydra and the hero. He was aiming to do the same; he had his warband on his left and they were ready to rush my right flank. 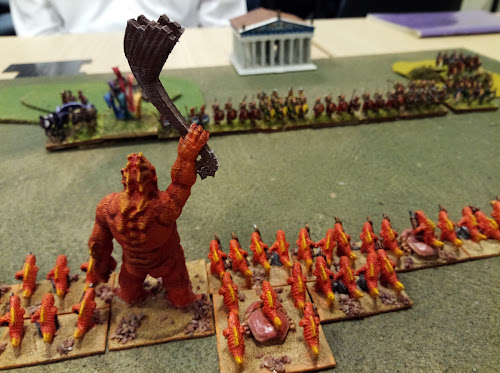 Battle was joined - a fight between spears is a long hard slog though. 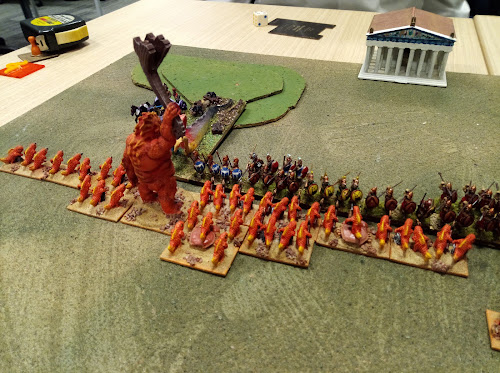 I used the shooters to overlap the Greek flank. 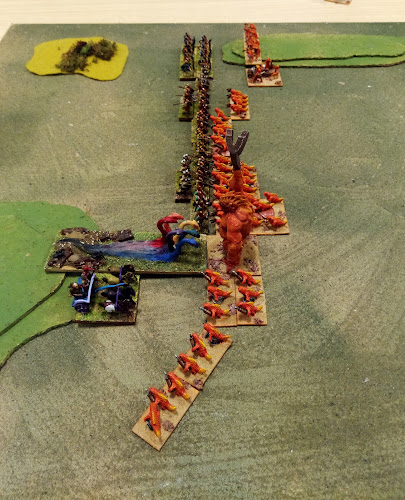 Geoff charged my right flank and in a flurry of combats destroyed the three elements there, losing one warband to the artillery in return. 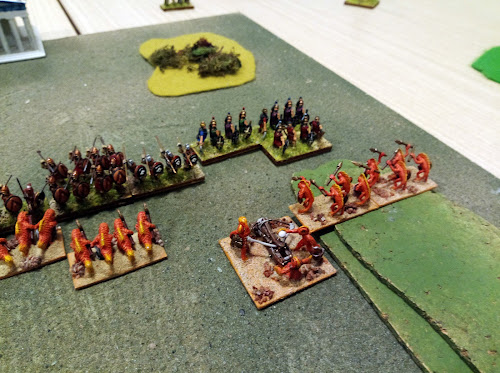 My troll behemoth engaged the Hydra, and didn't lose a single round of combat, despite the factors being against him. He forced the multi-headed monster off the table. 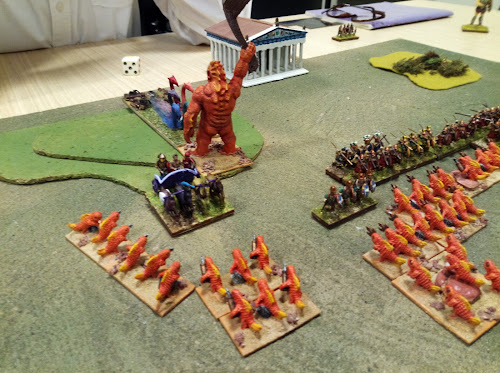 This left the Greek hero general isolated, and he quickly fell to the troll, giving the Fishmen a win. 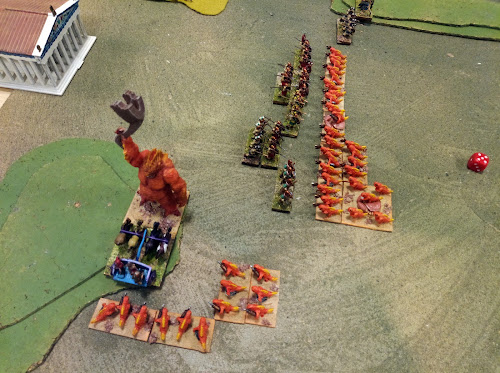 For the second game, Geoff sacked the Hydra, and the god (which never appeared, so I forgot about it), and replaced them with a couple of giant, which would be cyclops, were they not endowed with twice the number of eyes one expects a cyclops to have. 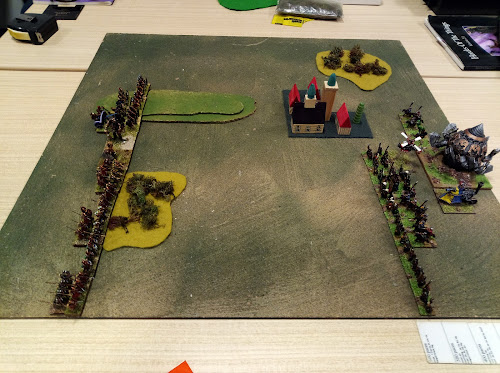 Somehow I felt that if I was going to match Geoff's spears with Dwarven blades I'd be best off closing down the table with bad going, and force him to fight on a narrow frontage. This would have been a good plan were it not for the fact that Geoff had bad-going troops in his army, and I didn't.

I tried to slip a flanking force past the town in the centre of my deployment area, but it got blocked by an advance party of Thracians. 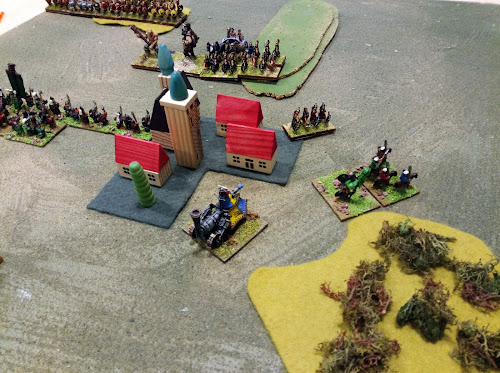 The two infantry lines advanced, whilst things got scrappy around the town. 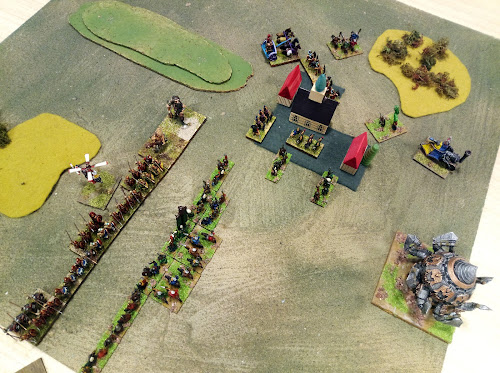 Things were looking bad for the Dwarves around the town, so I rushed the Greek spears hoping the applied pressure there would slow things down on my flank. The blades steadily wore down the spears 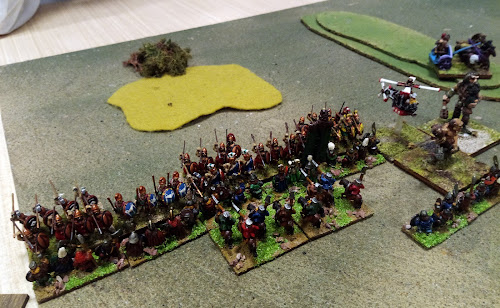 One of the giants broke through into the Dwarven rear, and made a rush for the stronghold. 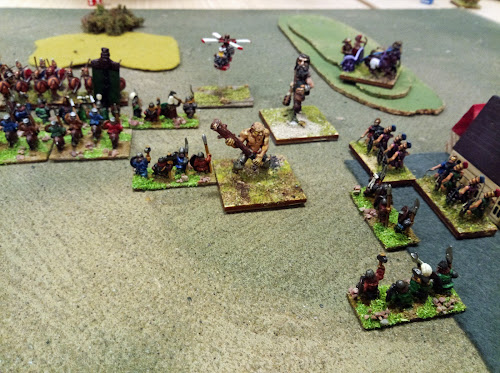 I moved troops to block it, and Geoff moved up troops in support. 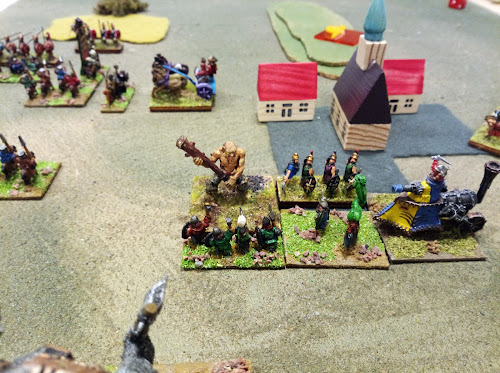 The flank of my blade line wasn't looking secure either, so I turned troops to try and gain my blades more time to hack their way through the Greek spear-line. at some point I obviously killed the second giant, because it's no longer in the pictures. 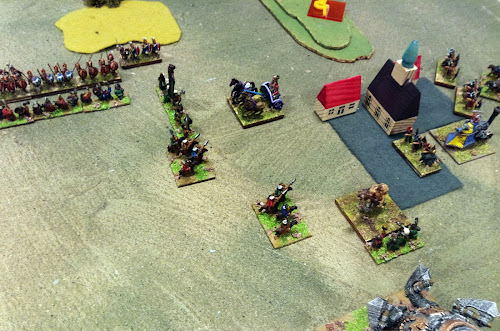 The other giant broke through and reached the stronghold with an impetuous advance. 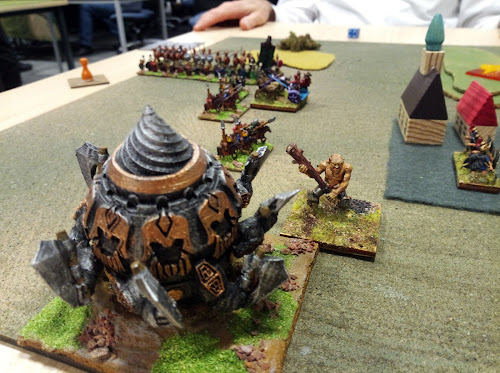 Before he could fight against it, though, the Dwarves brought up their cavalry reserve, and hit the giant in the flank. In the ensuing combat the giant was killed. And that pushed Geoff's army over its break-point to give the Dwarves a win. 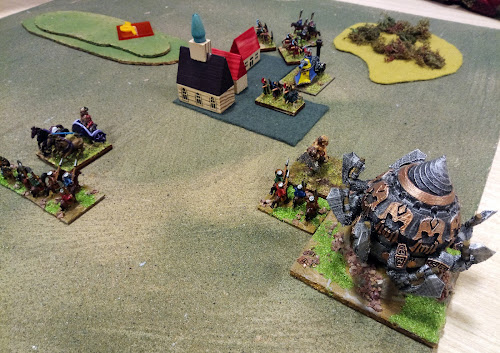 The second game was a lot closer than the first, with some quite subtle maneuver around the town, and both armies in trouble at various points.

36AP does look very nice, but I'm still a basic 24AP game traditionalist at heart.
Posted by Kaptain Kobold at 11:43