With our club night falling on the day before ANZAC Day, I thought I'd put together a small 'Spandau and Lewis' scenario featuring Australian airmen. I'm currently reading 'Fire in the Sky' by Michael Molkentin, which is a history of the Australian Flying Corps in WW1, and in it is a brief account of the Corps' first air-to-air fight, over Sinai in November 1916. So I set up that, reasoning that we could play it through more than once during the course of the evening.

And here it is.

From ‘Fire In The Sky’ by Michael Molkentin

“On 8 November, A-Flight moved from Sherika to Kantara aerodrome, placing all four flights in the Sinai region for the first time.  The squadron was thus able to make more concerted efforts, the first of which came on 11 November when it mounted the largest bombing raid yet to be undertaken by British forces in the theatre.  Beersheba was the target, site of the Turkish Army headquarters and [German squadron] FA 300's main aerodrome.  At dawn, nine BE2cs and a Martinsyde flew from their aerodromes and assembled at Mustabig.

Eight of the BE2cs carried only a pilot, so that they could take extra bombs and fuel. The Martinsyde and Wackett's BE2c escorted them.  The formation refuelled and set out at 8.30 a.m. Approaching Beersheba, they were greeted with heavy anti-aircraft fire, flying “through a flurry of white, black and green shell bursts.”

James Guilfoyle (who had replaced Oswald Watt as B-Flight's commander in October when Watt went to England to establish another Australian squadron) dropped a 100lb. bomb from the Martinsyde right in the middle of the German aerodrome, while others scored hits on tents, railway buildings and tracks.

Two Fokker monoplanes took off and chased the Australians as they made for home. Wackett and Turner (as observer) lagged behind, and descended to the enemy's altitude to offer an appealing target.  Wackett kept their tail to the enemy, allowing Turner to stand up in the turret and fire as the Fokkers closed.  "The enemy plane,” wrote the satisfied inventor, “was completely surprised when his attack was met by a continuous fire from this new gun location and he retired immediately..."

This raid marked the beginning of Australia’s history of air-to-air combat.”

This scenario covers Wacket, Turner and Guilfoyle’s fight against the two Fokker monoplanes (assumed to be Fokker EIIIs). The Australians are looking to drive them off, whilst the Fokkers are looking to chase down the eight unarmed BE2s that are assumed to be returning home off table after making sure that they themselves are not chased down.

Both crews are experienced

One pilot is experienced, the other is a novice.

A board 2’ square is sufficient for this scenario. One edge is the Turkish edge. The opposite edge is that of the Australians. The Turks set up first, within 6” of their edge. The Australians set up second, anywhere within their own half of the board.

The game lasts for at least ten turns or until one side achieves their victory condition. At the end of the tenth turn, and each subsequent turn, roll a D6. If the score is 5 or more then the game has ended.

The AFC win by shooting down at least one Turkish plane before the game ends.

If both sides achieve their victory conditions in the same turn, or neither side achieves it before the end of the game, then the game is a draw.

The BE2 is armed with an experimental mount which enables it to fire LA, RA and TA. All arcs count as restricted (-1 dice).

On the turn after the BE2 fires on either Turkish plane, both Turkish planes suffer a -1 to their initiative roll. This represents the surprise at being fired on by a BE2.

Note that it uses the Power rules which I think I outlined in a previous post. Obviously it's easy enough to convert to other rules. Unlike the real action the Turks (who may have been Germans, and indeed probably were) stick around to fight rather than flying away at the first shot.

The planned games for the evening were this scenario, plus a couple of small, six-unit Black Powder games, with the idea being that people could move from table to table playing each game during the course of the evening. In fact I ended up playing or umpiring this scenario three times.

The first game saw four of us taking part (which wasn't really how I designed it, but there you go. Dave and I took the Aussies, whilst Caesar and Geoff took the Turks, with Geoff's consistently poor maneuver rolls seeing his novice pilot have a particularly frustrating game. Geoff has played Spandau and Lewis recently, Caesar not for a while and Dave never.

We piled into a dog-fight in the middle of the table, and lots of bullets flew around. Here's the first pass. Possibly not as attractive as it could be, with the initiative dice and lost Power marker on the table, but they keep the game running smoothly. 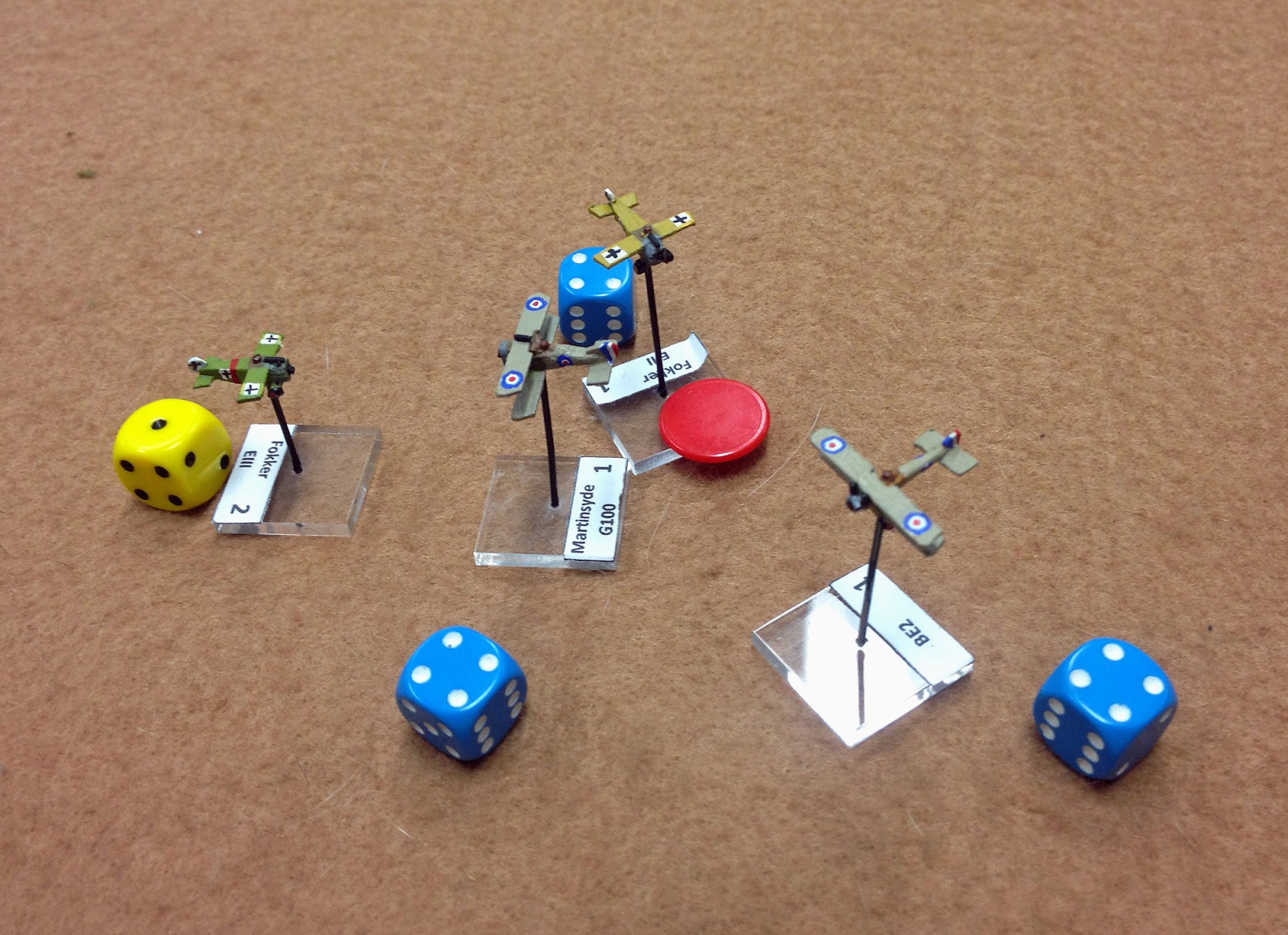 Dave took a structural critical on his BE2 early on, but continued to fly it aggressively, despite bits coming off it. Towards the end of the game the inevitable happened, and it was shot down. I told him he should have turned left instead of right. 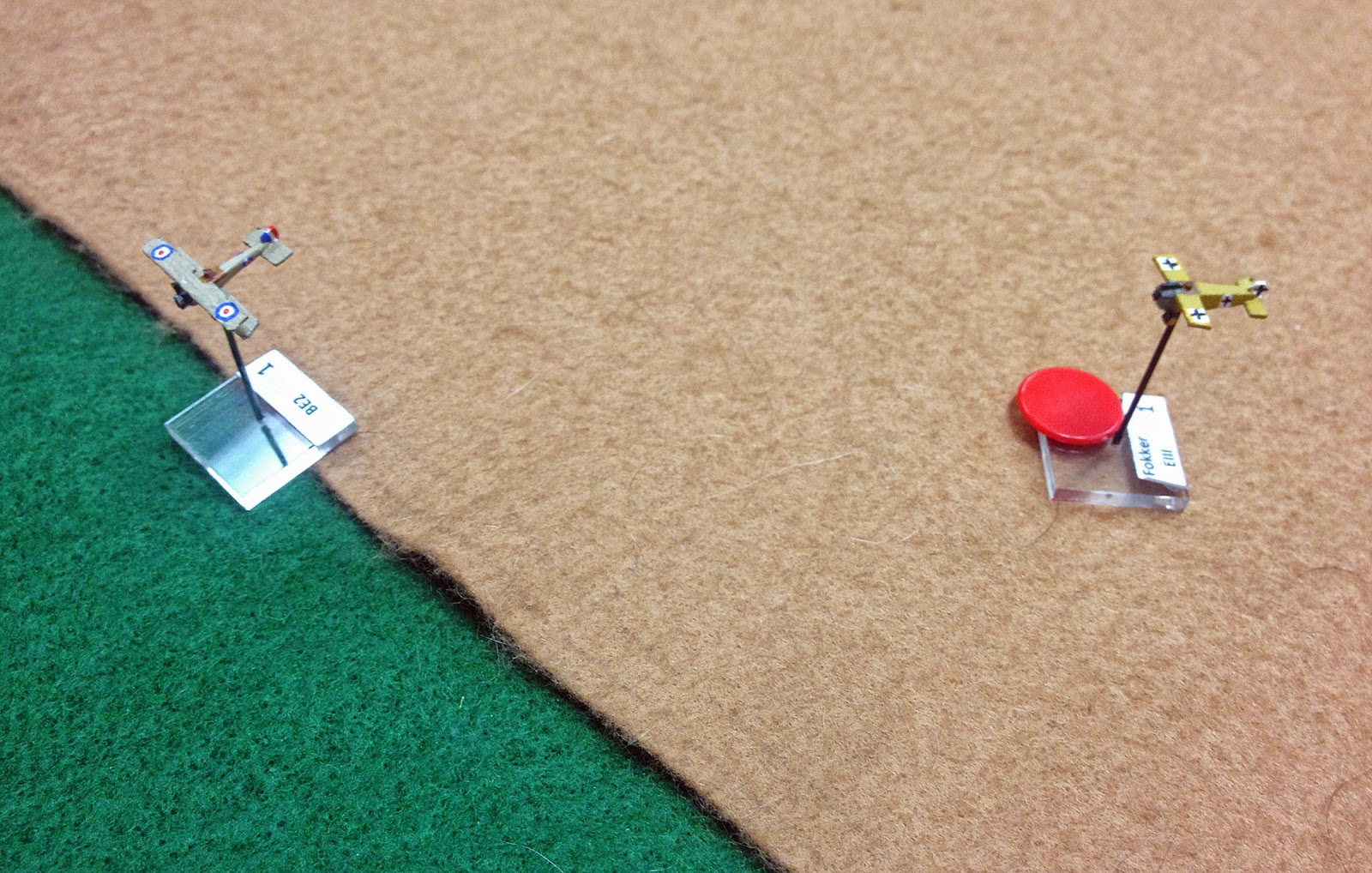 Despite Geoff's bad luck with maneuver (which, it has to be said, also translated into lucky rolls for Power, as that mechanism rewards low rolls), he was able to get his plane off the table, giving the Turks a victory in 11 turns.

In the second game I played against Tim, who was up from Melbourne for the holidays. I took the Turks (or Germans), and he ran the Aussies. He went for an aggressive approach, and pushed the fight hard up against the Turkish baseline. 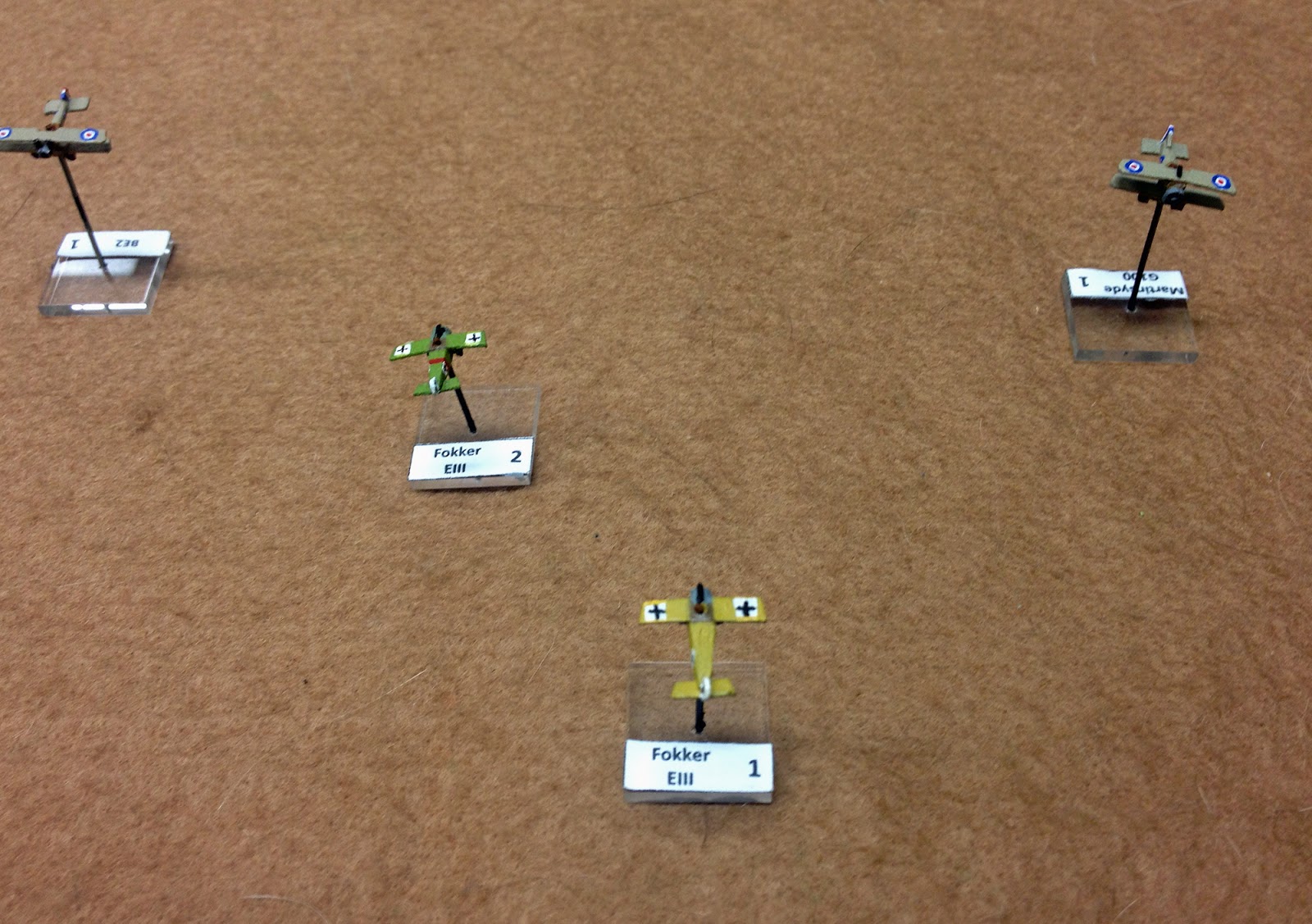 There was lots of shooting, of course, and chasing around, but none of it translated into kills. The Germans (or Turks) had a slight edge in the fight, but as time ran out it was obvious that even if they shot down an Aussie plane they were unlikely to get off the Australian edge before the end. The game ended in a draw after ten turns. Wacket and Turner in the BE2 had fired off every last round of ammo by the end. 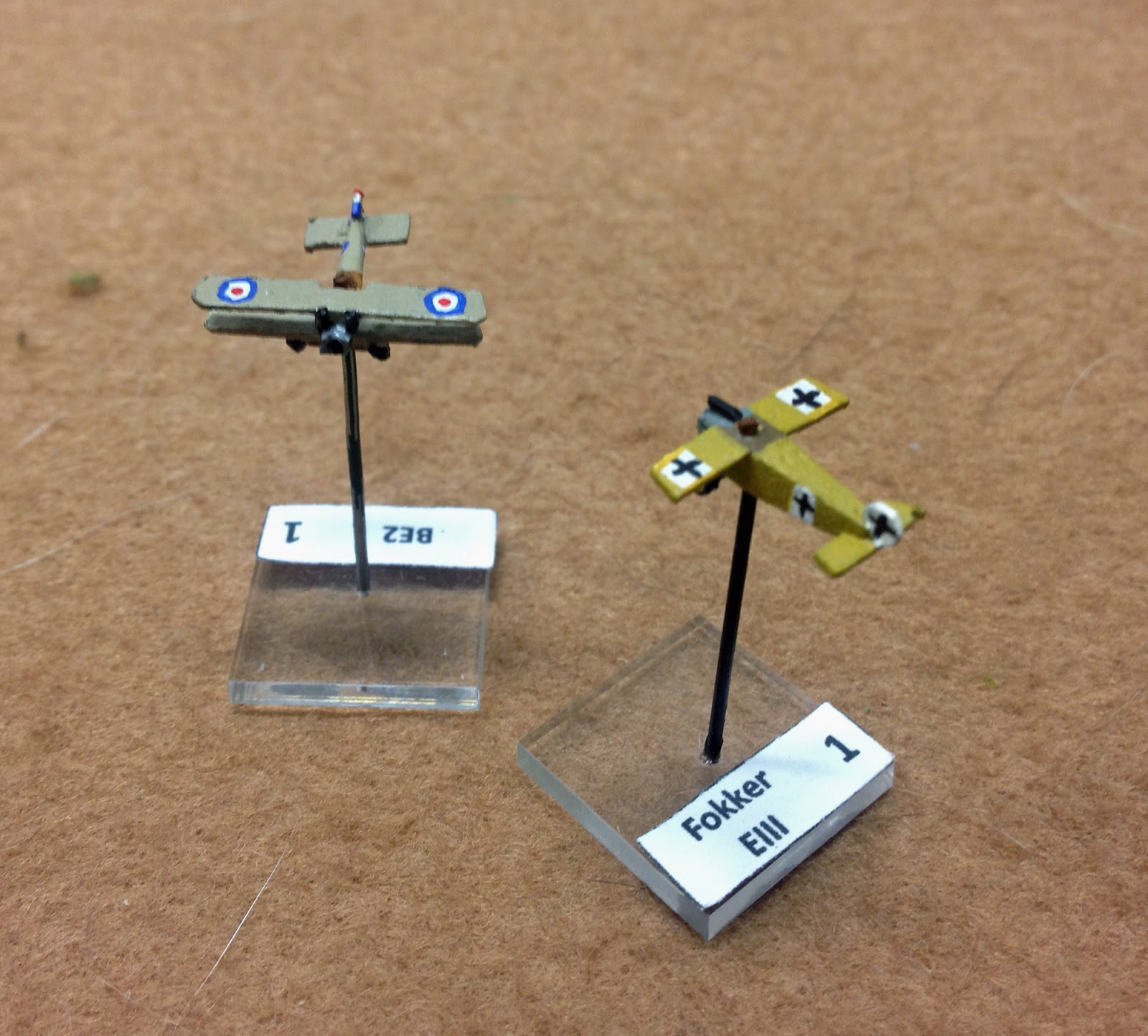 I umpired the third game, as Ulli (AFC) took on Bryan (Turko-German). Bryan pretty much made a run for the Australian edge with his novice pilot, reasoning that he could take down an Aussie plane with his other pilot if he could keep them split up. 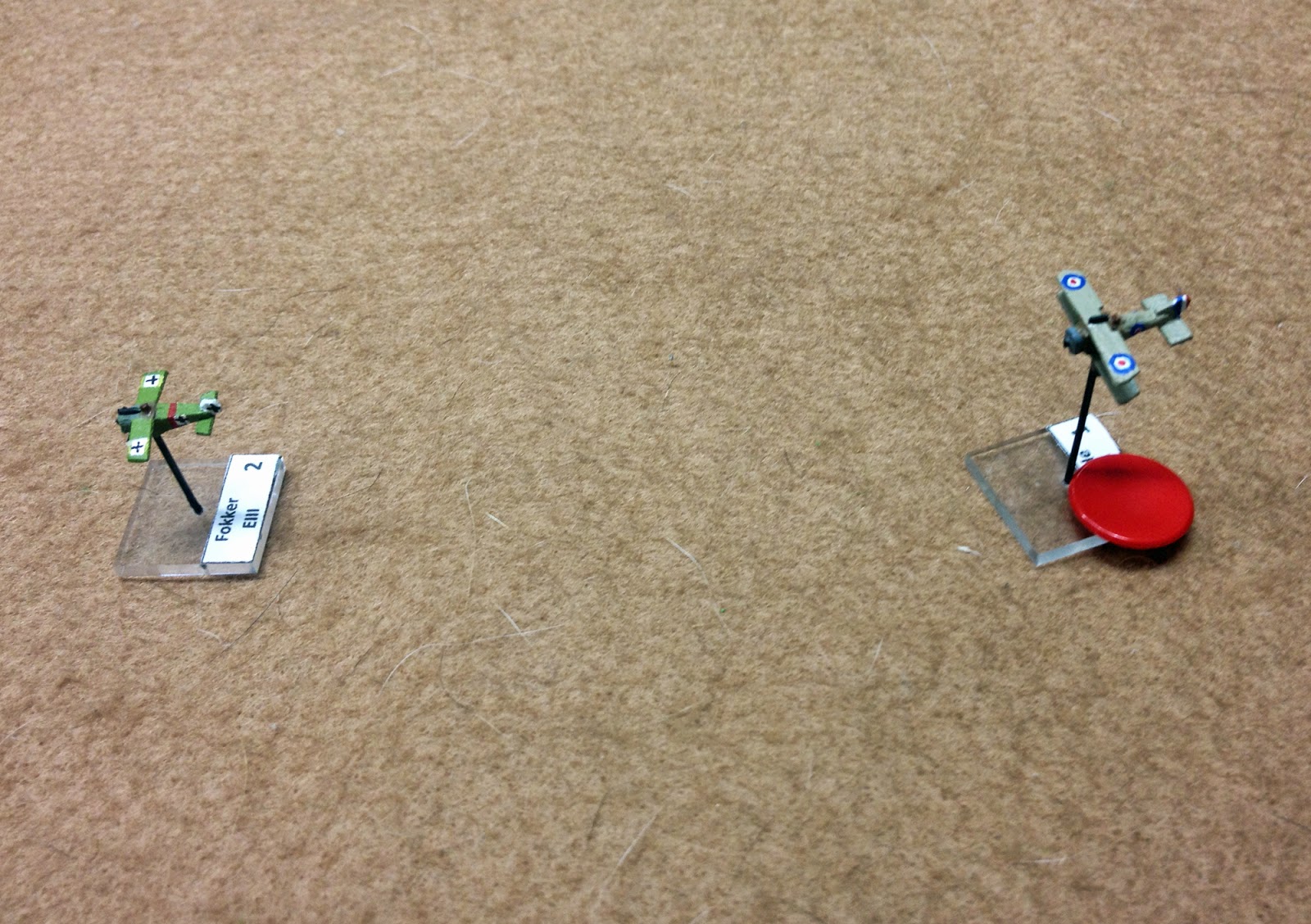 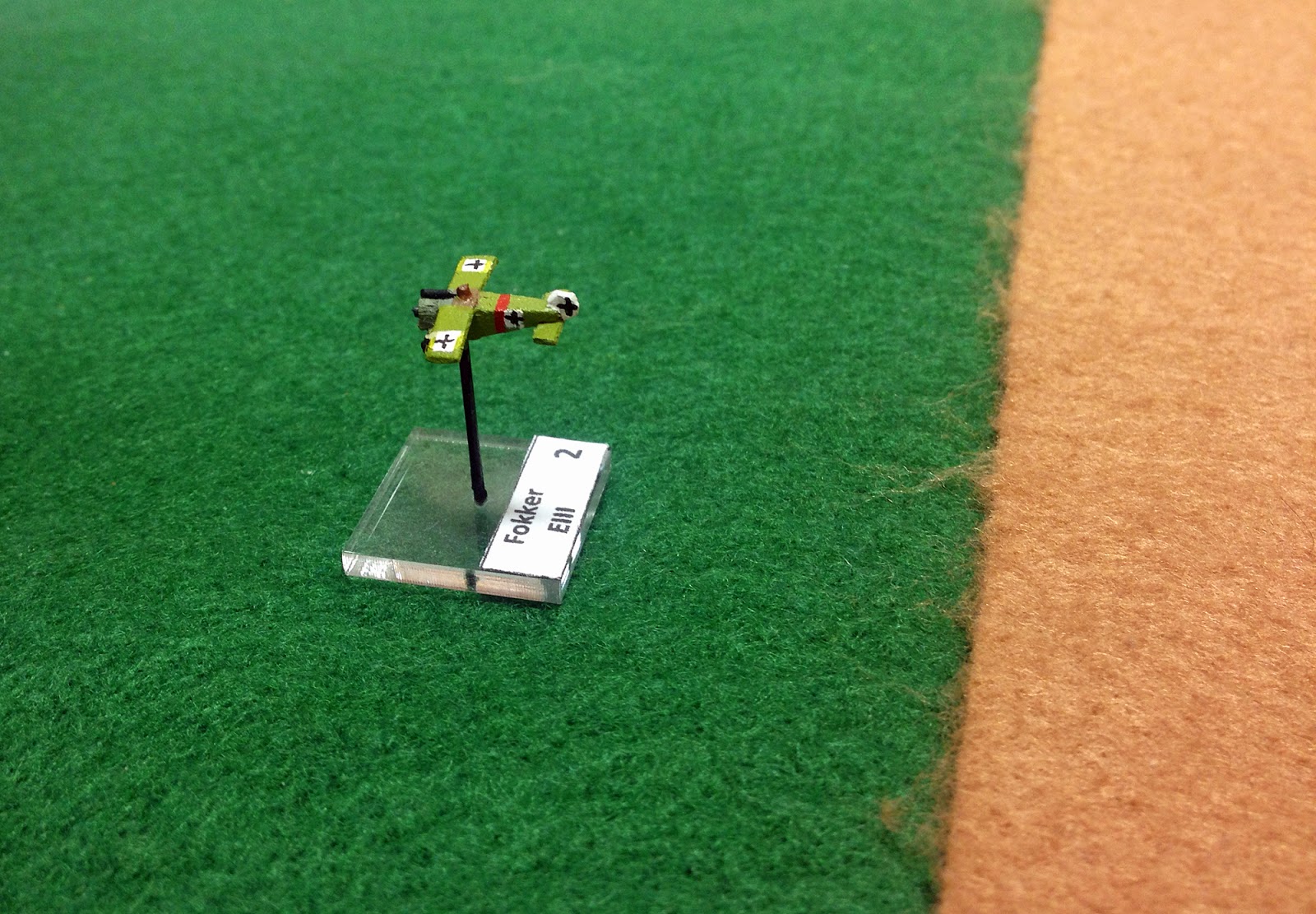 Bryan couldn't get a clear shot at either Australian plane with his other EIII though - initiative rolls like this didn't help, and neither did abysmal shooting which saw no plane take any significant damage. The game ended in a draw. 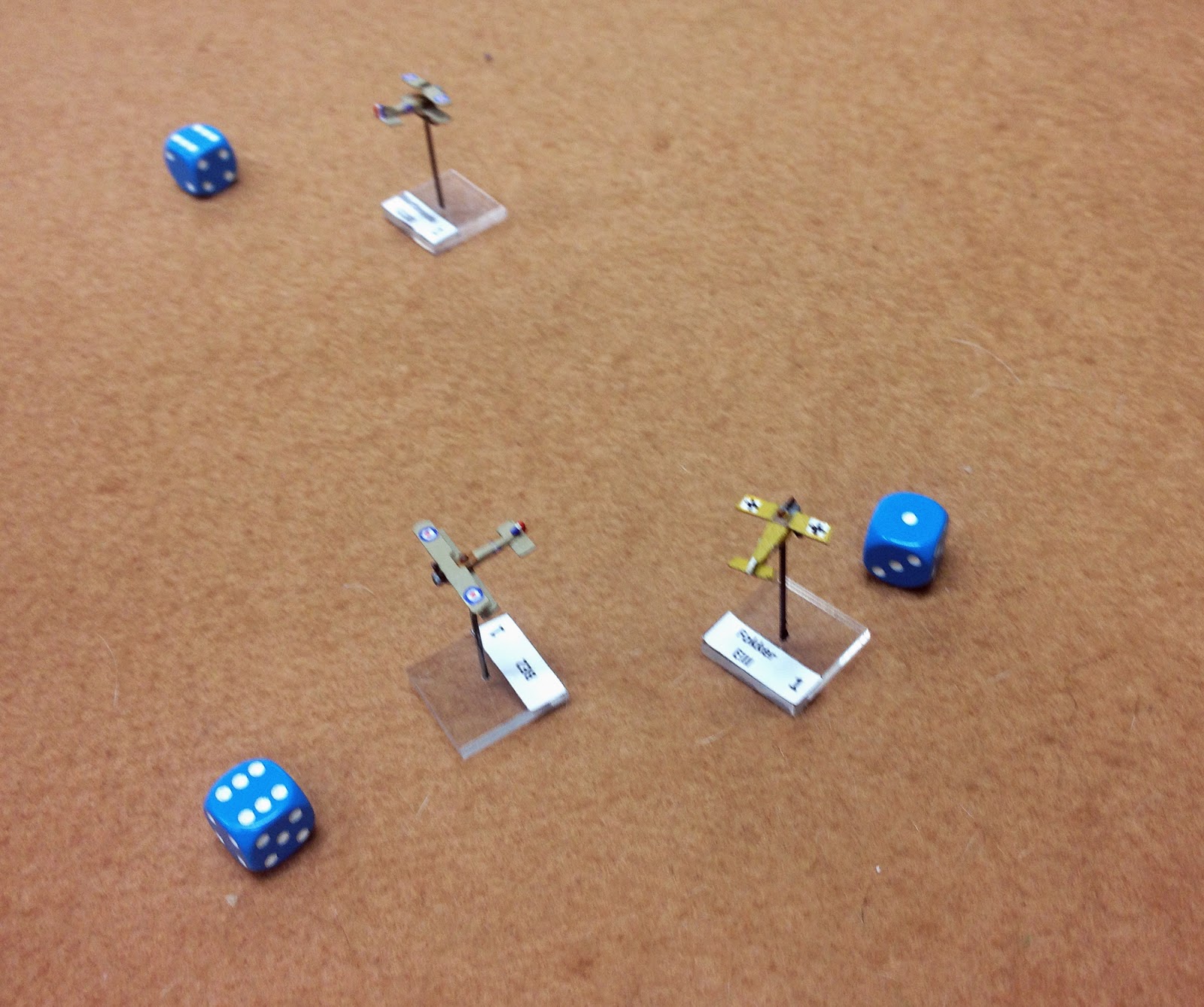 The scenario played well, and was good fun despite the low casualty rate (one plane shot down over three games). In my three solo test games, honours were even; the Turks won the first, shooting down the BE2 and then pursuing the bombers, then the Australians won a quick victory in the second, with the first burst from the BE2's Lewis killing a German pilot. Finally the third game was a hard-fought draw. And how often do you see WW1 air games set away from the Western Front?

I only got a brief look at the Black Powder games. They involved generic armies, with six units a side in a 3-2-1 format (examples: 3 infantry, 2 cavalry and 1 artillery, or 3 cavalry, 2 artillery and a skirmisher unit) and were designed to offer interesting tactical puzzles and quick games, whilst allowing people to explore nuances of the rules.

This one involved one force ambusing a road column. 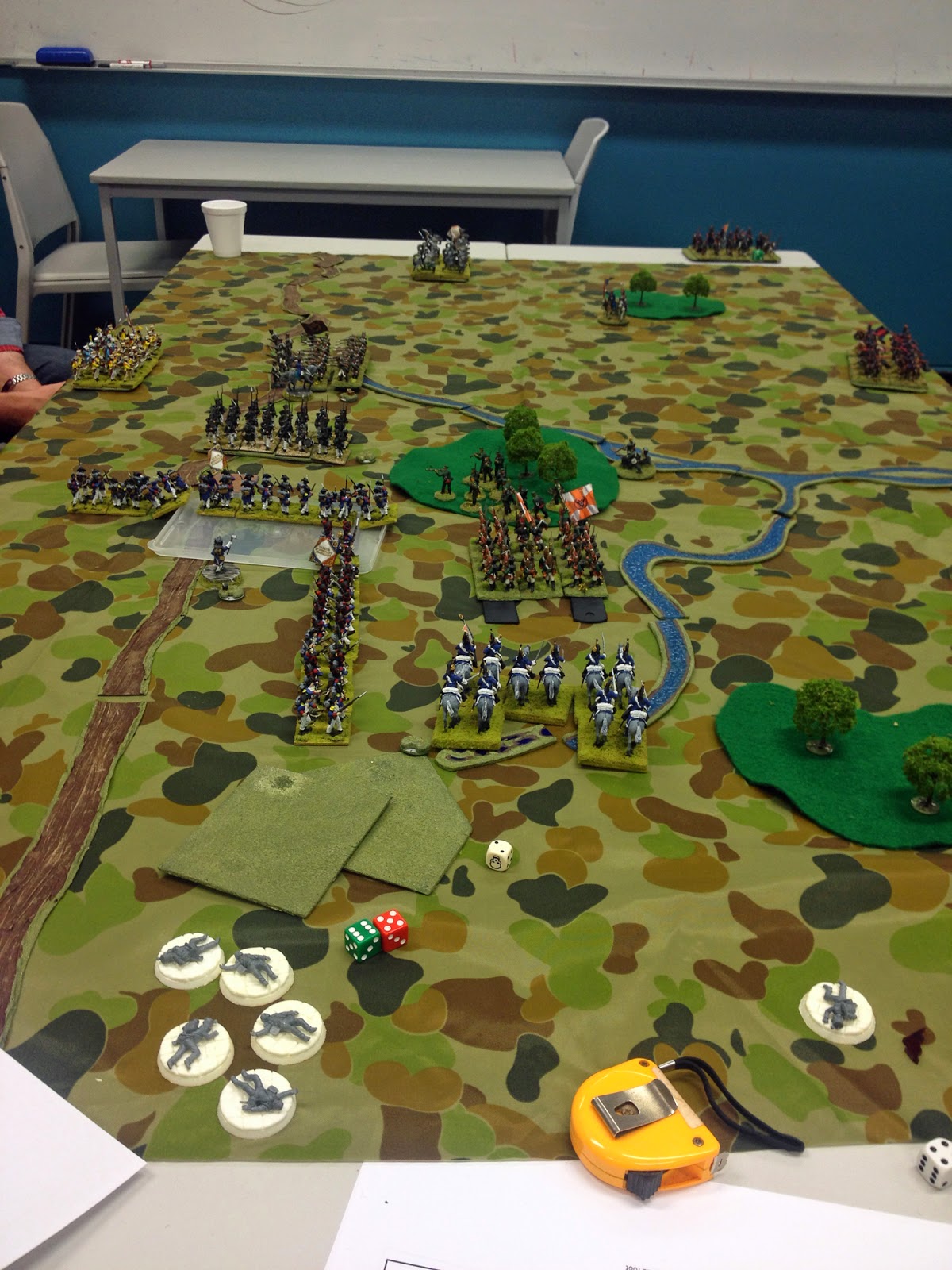 And this involved two forces fighting for control of a central building. 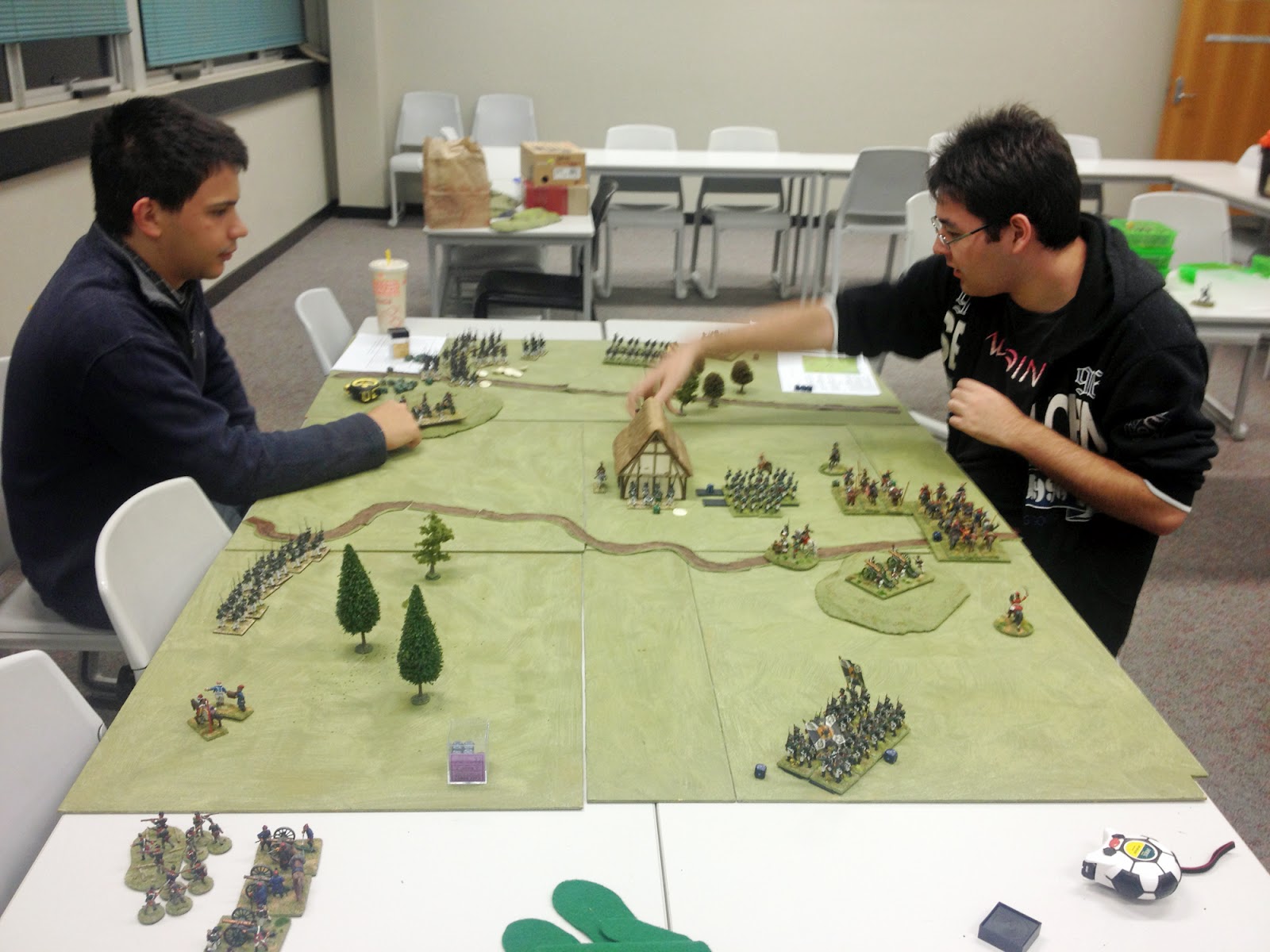 I think both scenarios were run at least a couple of times, including with new players, and worked well. There's a cavalry action one I'd like to try - of course.