I have been organising plane statistics for 'Spandau and Lewis' today, as a lot of them were on scraps of paper rather than the nice spreadsheet they deserved. I cheat, of course, and base them on the values given in my copy of GDWs 'Aces High'. That's nearly 100 aircraft, from 1914 through to the end of the war, so I plenty to deal with.

Having done it, I decided to treat myself to a quick game, and decided to set up the classic Hawker vs Richthofen fight of 23rd November 1916. This pits a DH2 against an Albatros DII.

I made Hawker an Ace, but decided that this early Richthofen only rated as Experienced. Their planes are fairly even in 'Spandau and Lewis' terms - both have a Speed of 5 and an Agility of B, but the DH2 takes one less hit; 5 as opposed to the DII's 6. I am also experimenting with a new rule which factors in climb and power in an abstract way; each plane starts with a number of points, which can be traded during the game for extra speed of a bonus to maneuver rolls. Planes with powerful engines or high rates of climb get more points than those that don't. In this scenario the DII had 3 points, whilst the DH2 had only 2. I rated Hawker as a marksman. To simulate this I decided that when he tested for a critical (which in 'Spandau and Lewis' means scoring less than or equal to the number of sixes you rolled for damage) he rolled two dice and selected the lowest. This made it more likely that he'd score a critical, if eligible to do so.

So, Hawker had the edge in experience, but Richthofen had a slight edge in terms of aircraft quality. He also had twin guns, as opposed to Hawker's single Lewis.

On with the game. Here's Hawker: 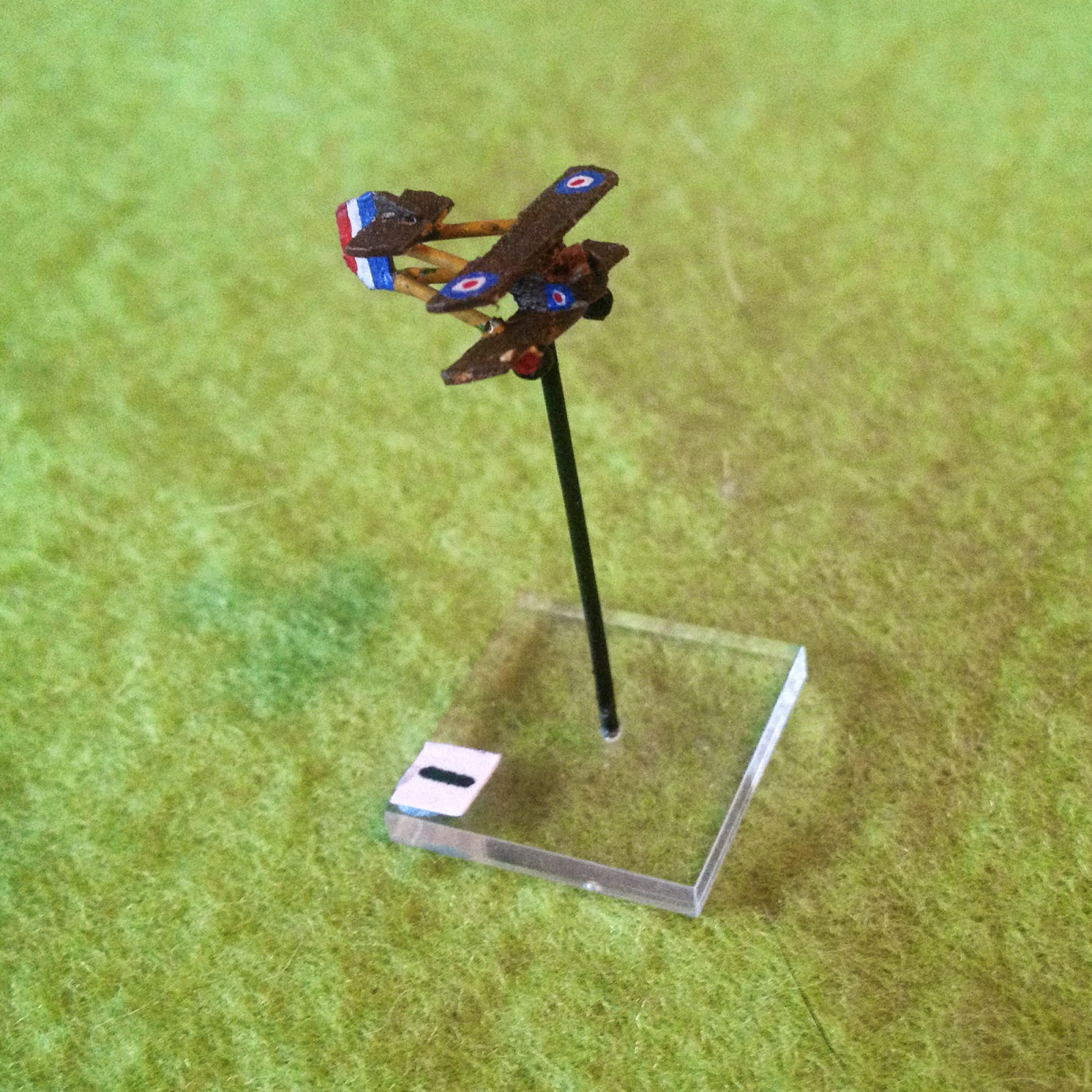 Richthofen started in a cloud. 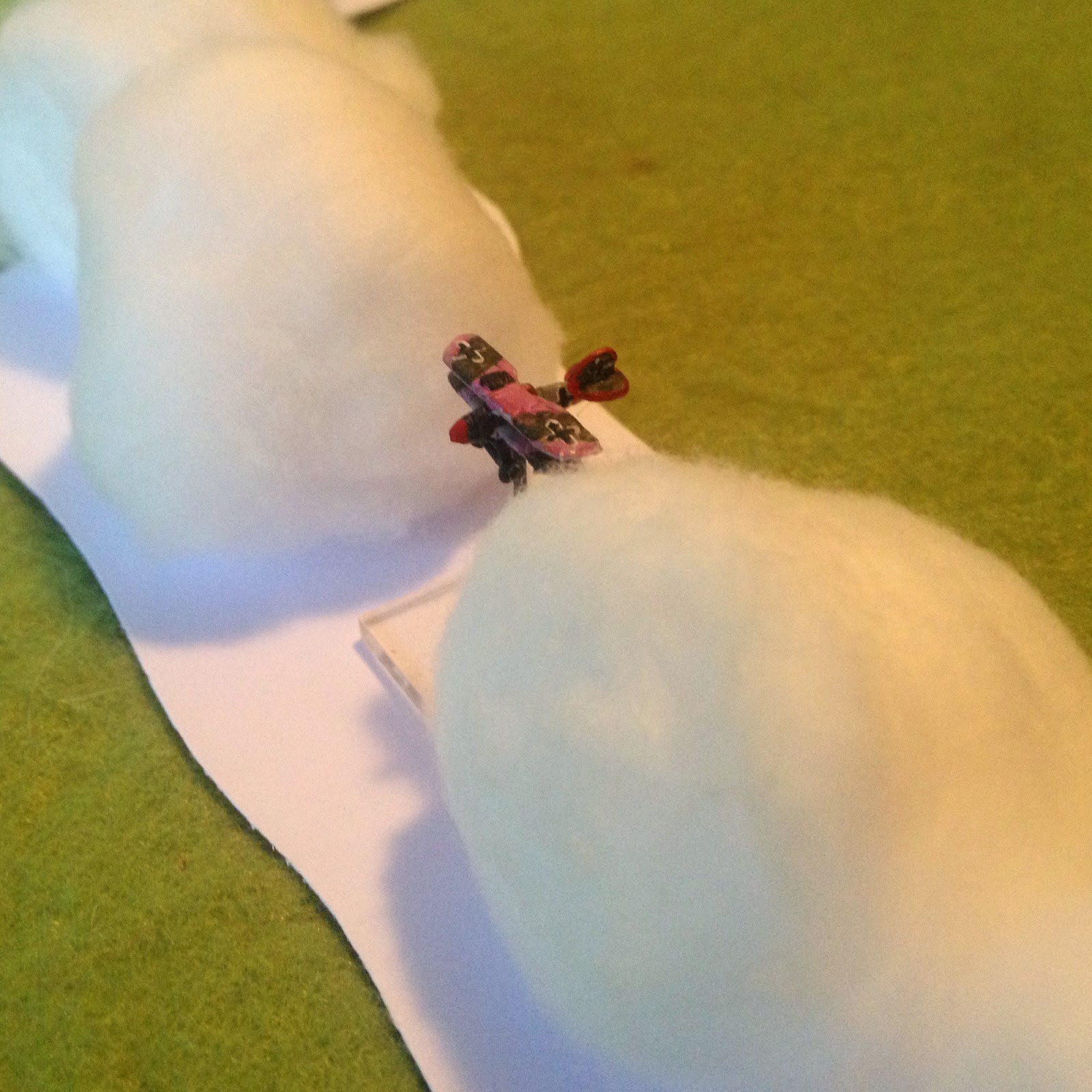 The circled around a lot. And that was the problem. With no focus for the fight aside from shooting each other down, there's no incentive to risk closing. With the planes fairly evenly matched, it boils down to the plane without initiative moving to safety, whilst the other one tries to catch it. 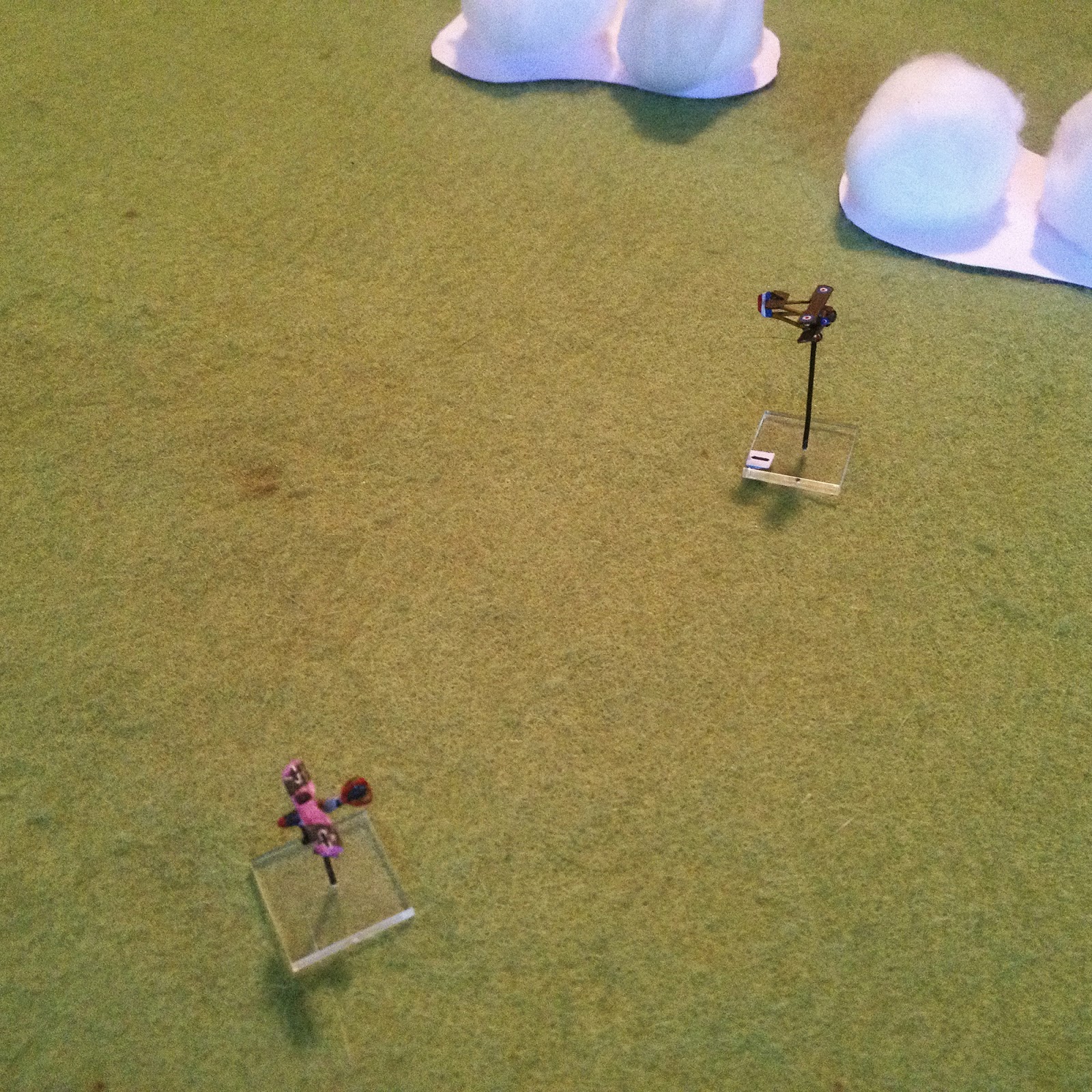 Every so often they passed close to each other, and shots were even exchanged. 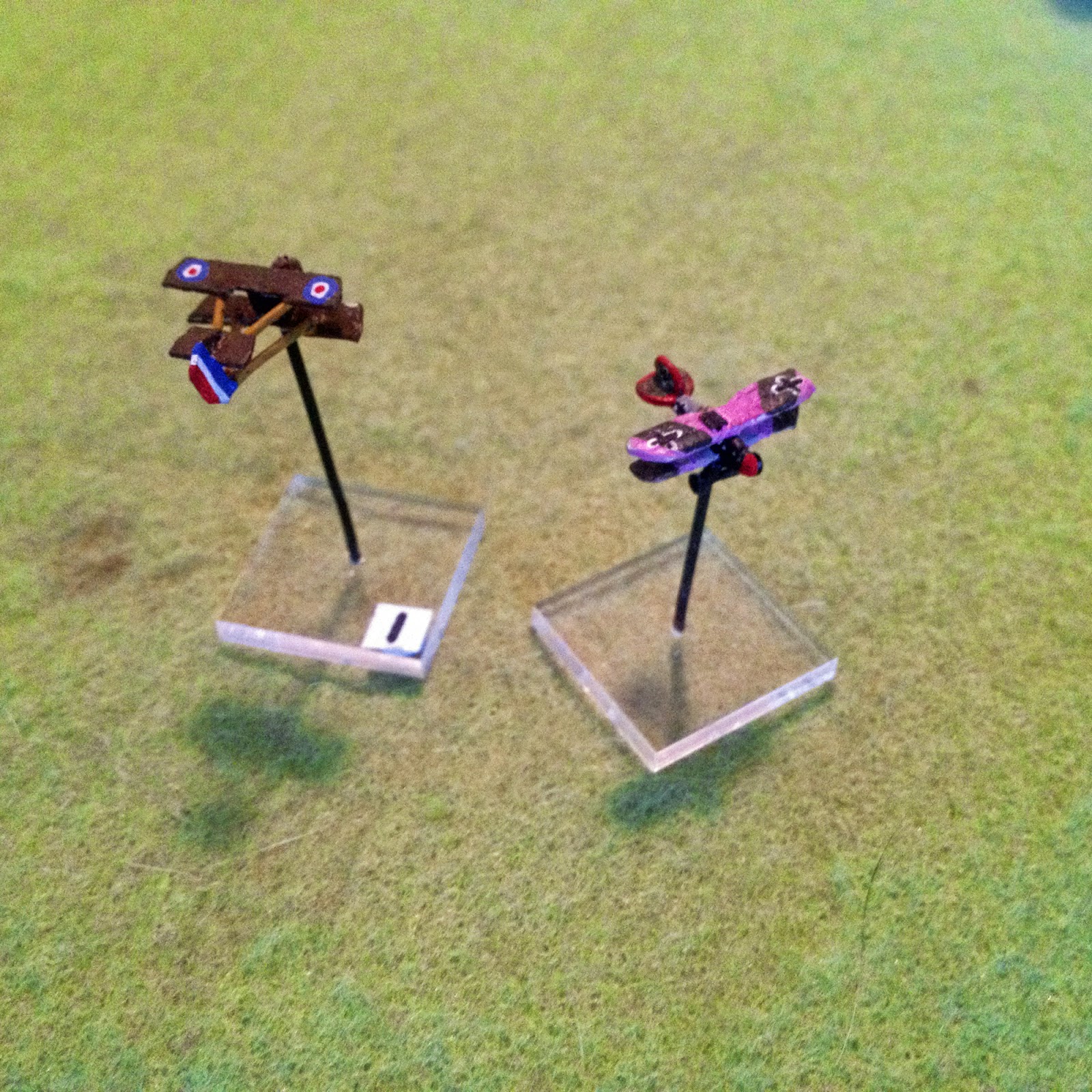 Finally Hawker managed to get a position where he had a close-range shot and Richthofen didn't. This was down to the edge he had in pilot skill. 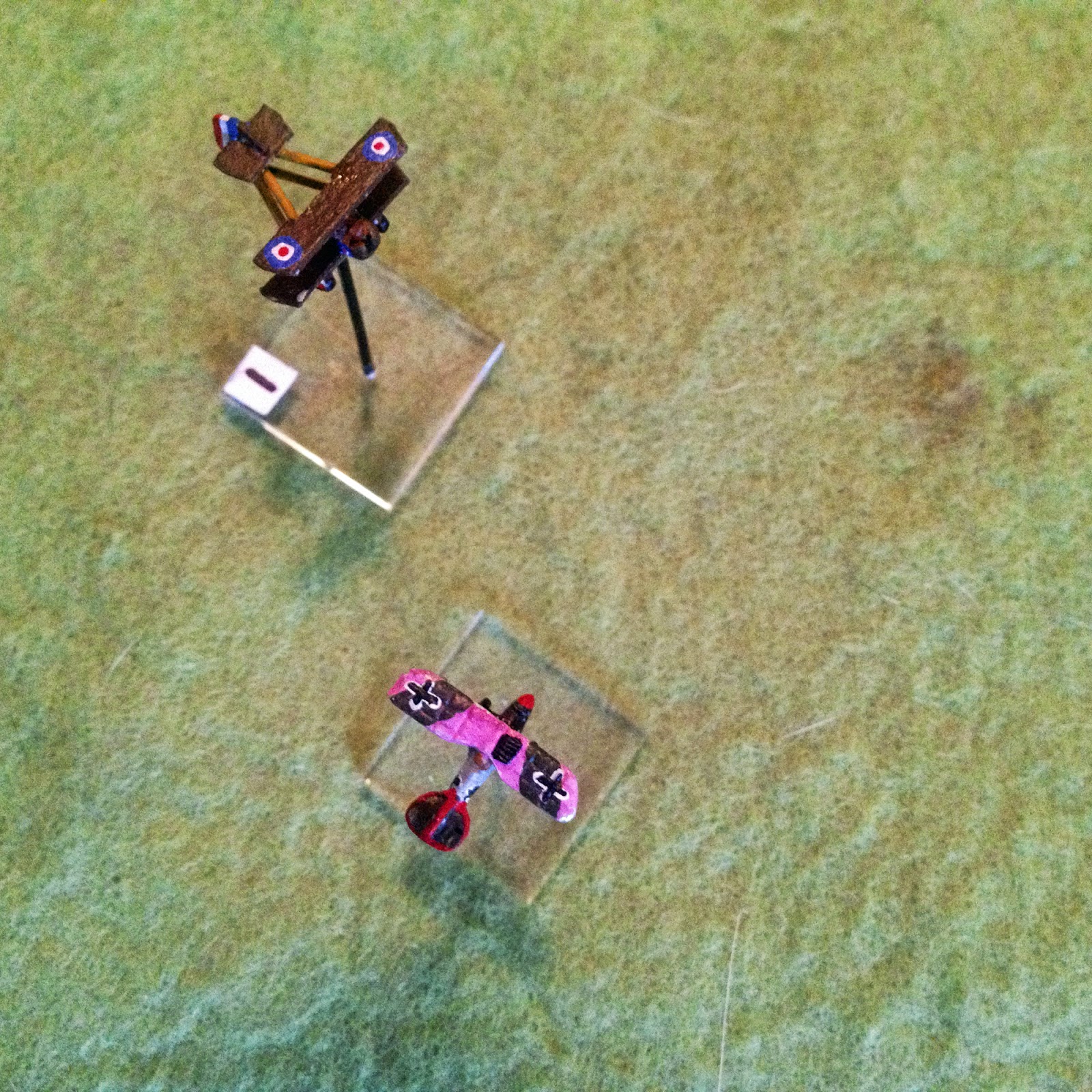 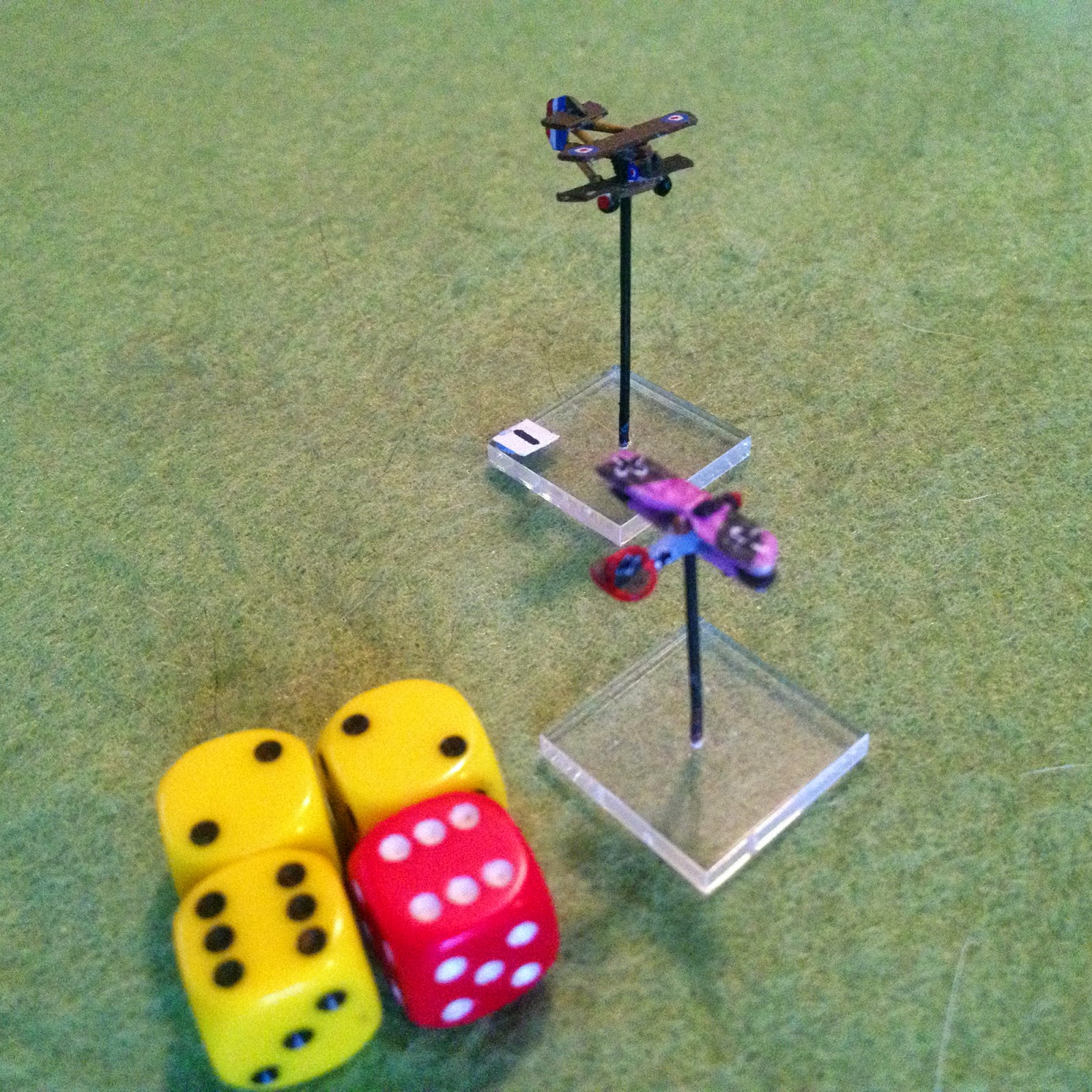 As a marksman Hawker rolls two dice and takes the lowest. He's looking to score equal to or less than the number of sixes rolled. That '1' is just what he's after. 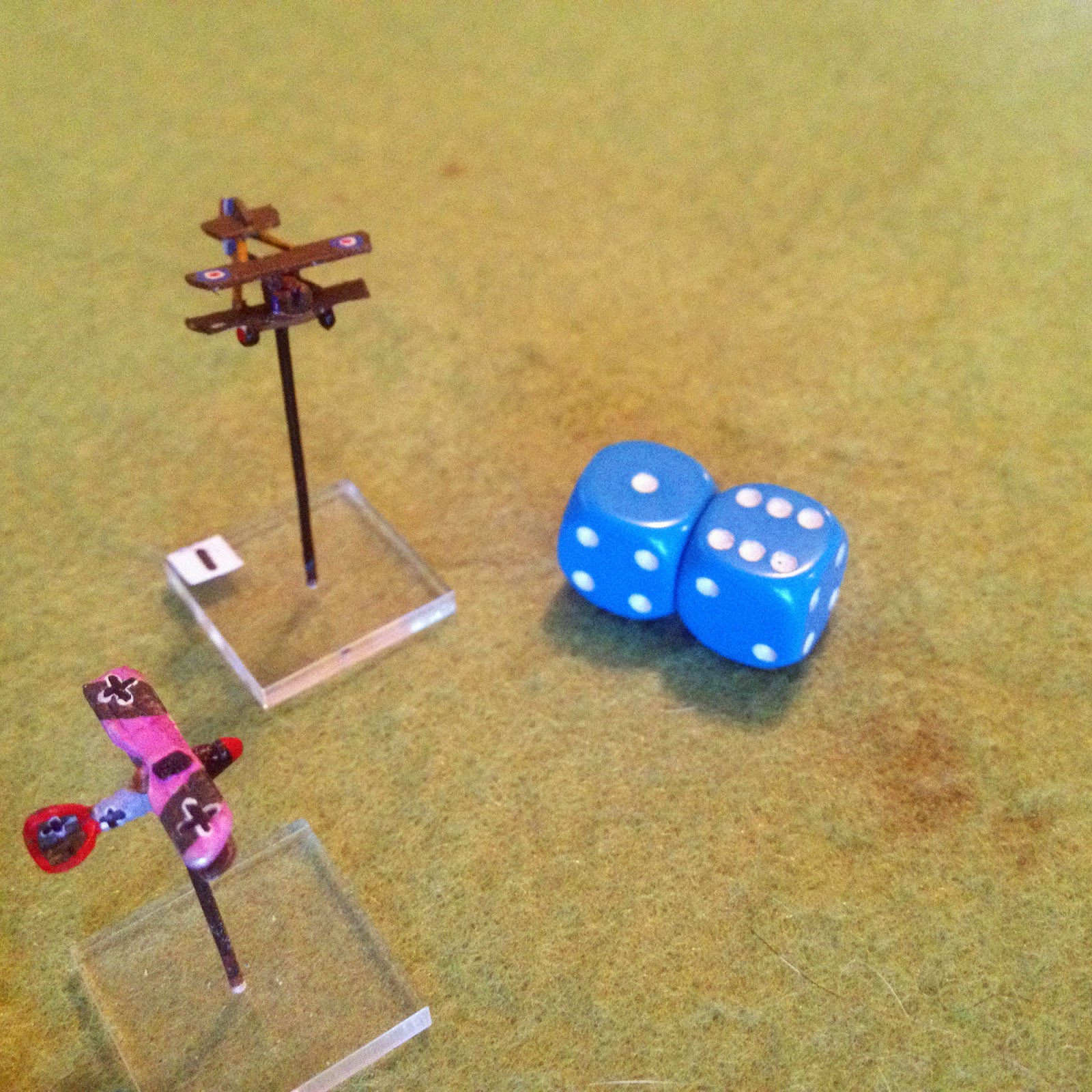 A roll of '2' sees Richthofen killed. Victory to Hawker. 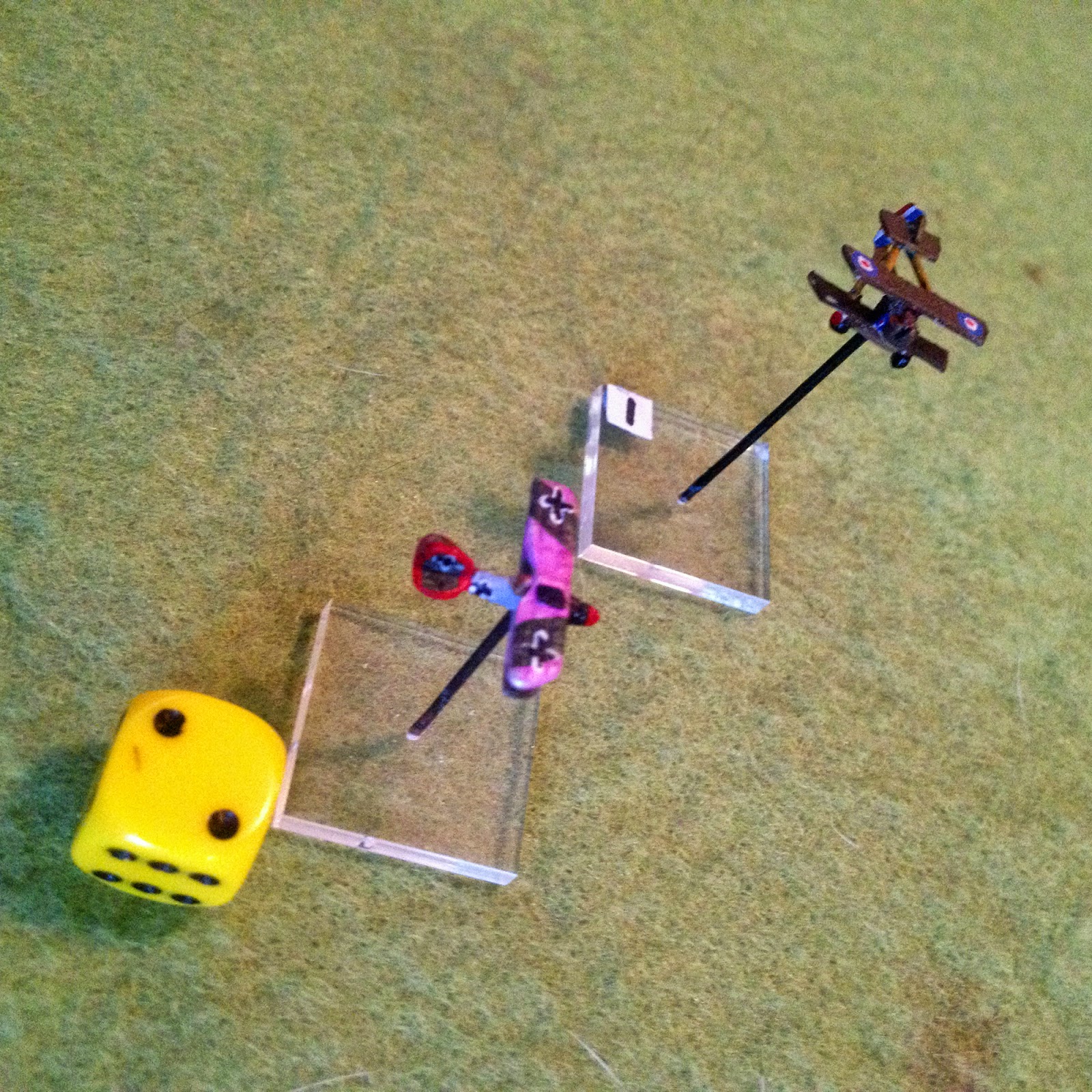 The balance was really off in that first scenario, with Hawker really having the edge. So I played it again, increasing Richthofen to Ace status as well. Of course this just made it easier for the planes to evade each other, although they exchanged some head to head shots - always the safest if you can't avoid an exchange of fire, as the deflection modifiers is negative. 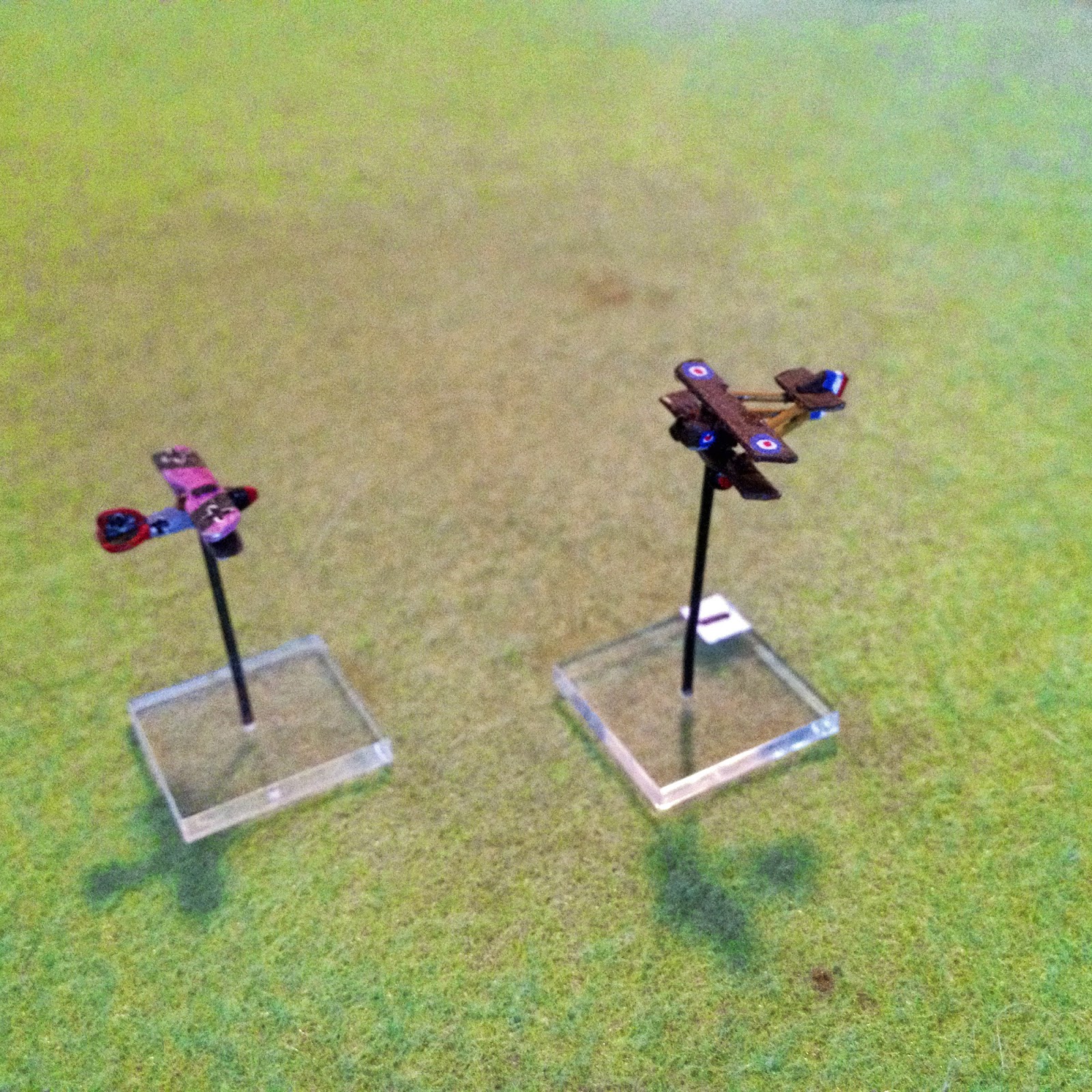 The second or third such exchange saw Richthofen score significant damage with his twin Spandaus, plus a critical. This caused bonus damage, and Hawker's plane fell apart in the air. Game over. 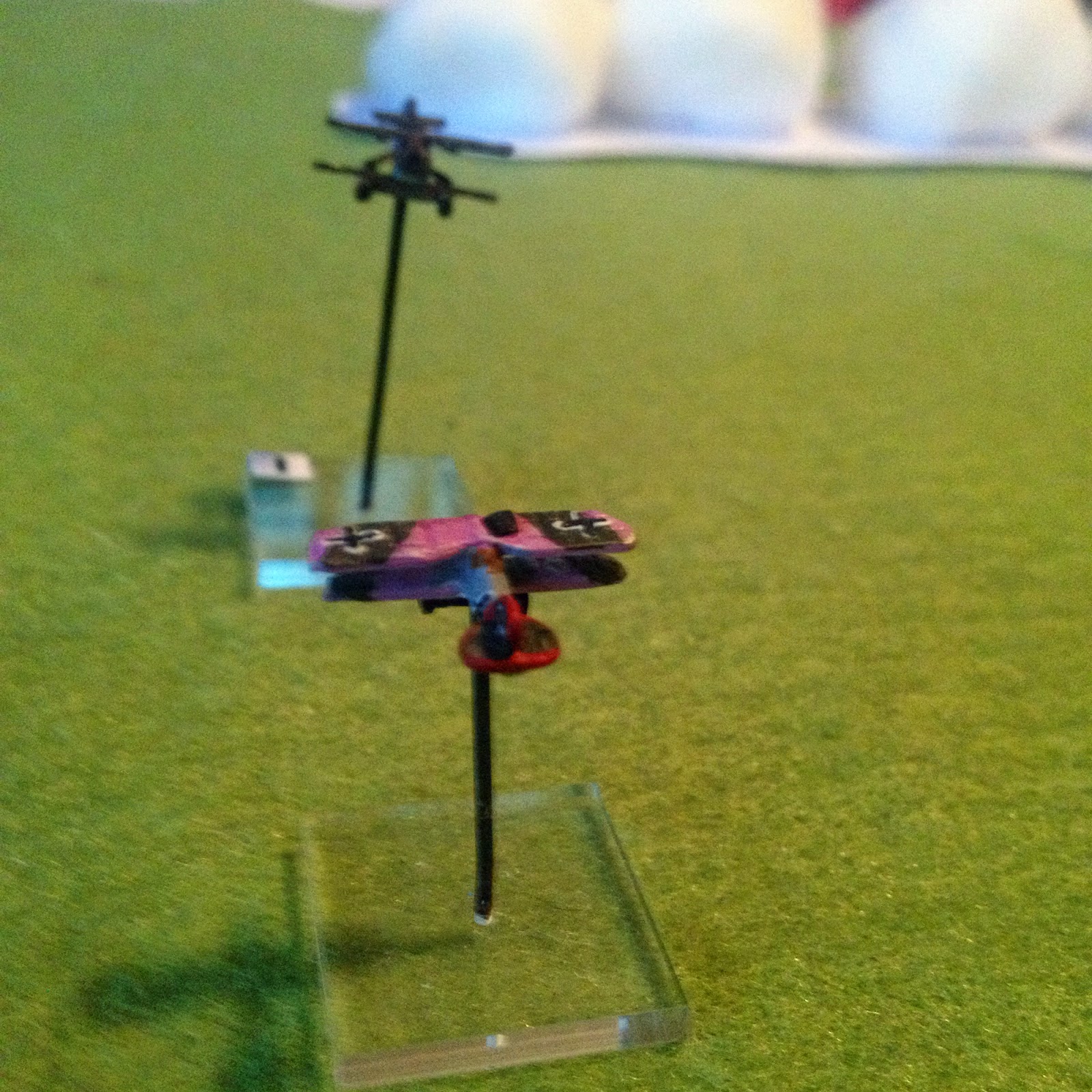 One-to-one duels can be played with these rules, but it's hard to make them decisive. At the end of the day you need something to focus the game - an objective or some bombers/two-seaters on a mission. Duels with more planes on each side work better, as it's harder to avoid all of them, but mission based games are far more fun.

The Power rules weren't too cumbersome, and added an extra option. But I need to make sure that they don't unbalance the game too much in favour of certain types of plane.