I'm still tweaking, poking and tinkering with Spandau and Lewis, although I'm  not sure I'm actually getting very far. But it keeps me off the streets.

Regardless of progress, though, I'm still getting some entertaining games out of it. This morning I set up a game based on the VC-winning exploits of Major Lanoe Hawker when, with a Lewis gun attached to his Bristol Scout fixed to fire outside of the propellor arc, he tracked down and shot down three German two-seaters, all themselves armed with machine-guns.

Once again Hawker's Scout was played by one of my scratchbuilt BE2s. I graded Hawker as an Ace Marksman. When you have a gun which only fires to the left, you need all the help you can get. 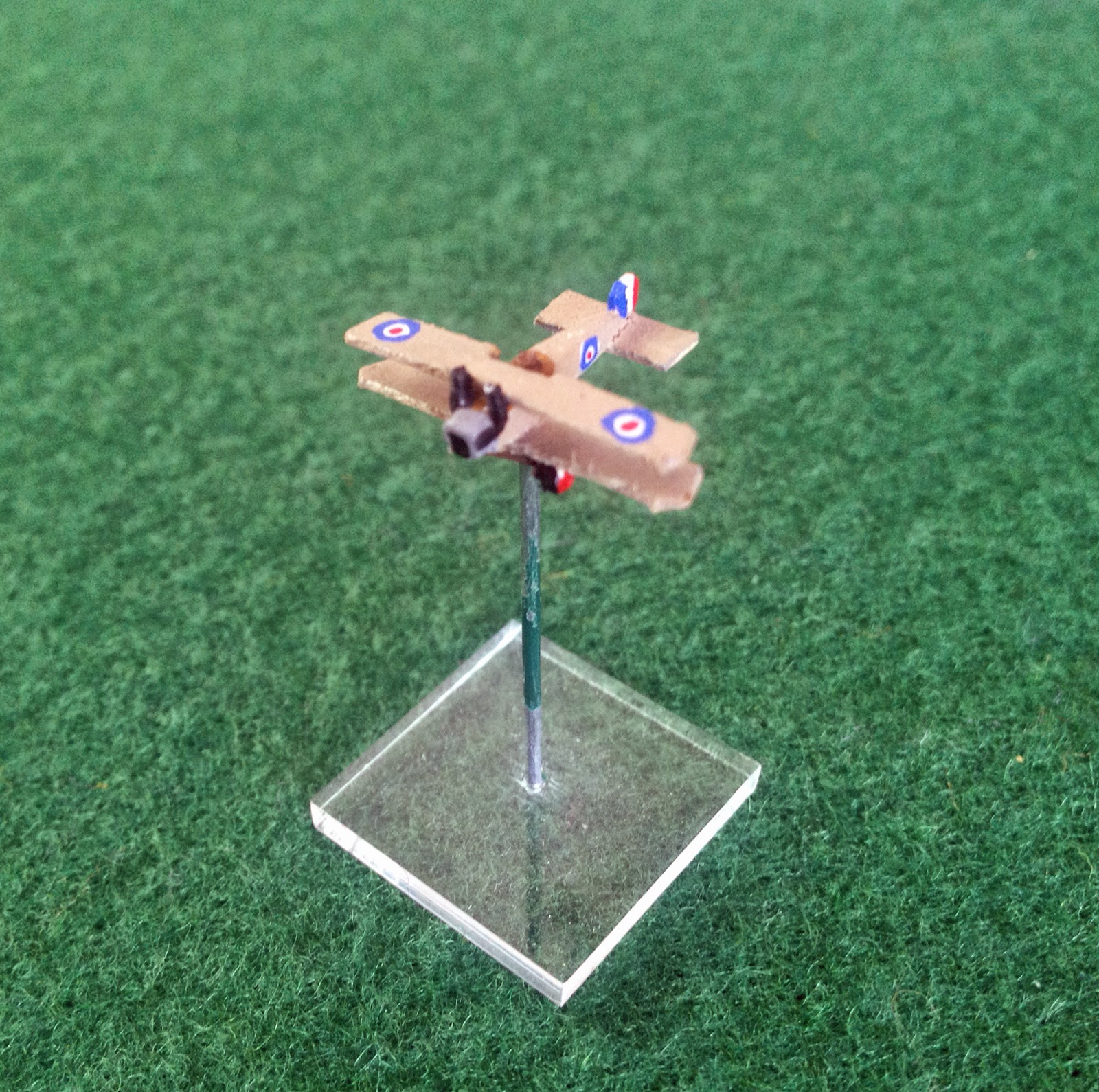 His opponents - three Roland CIIs, masquerading as DFW C1s. One was a Novice, the other two Experienced. 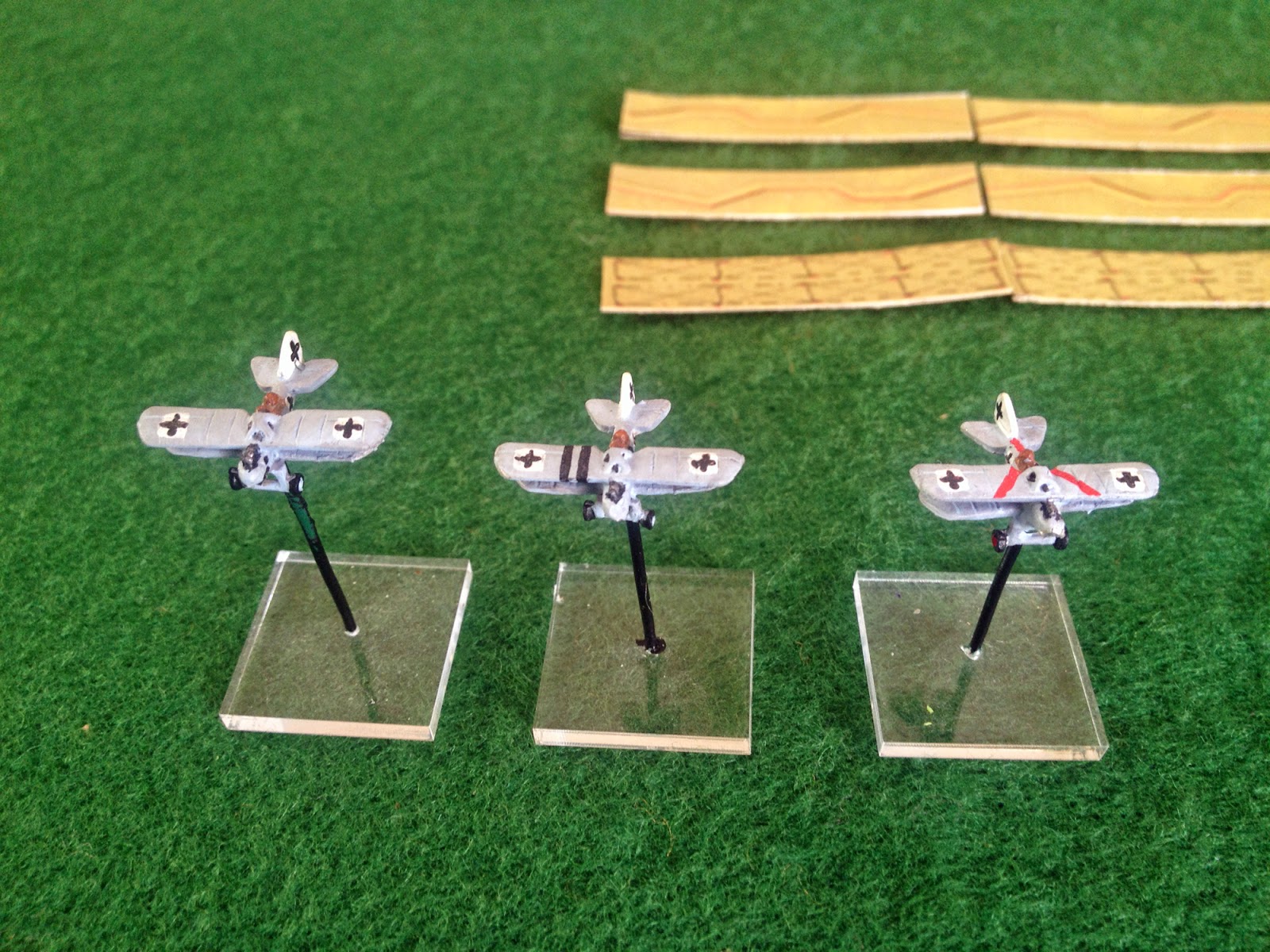 This was the board. 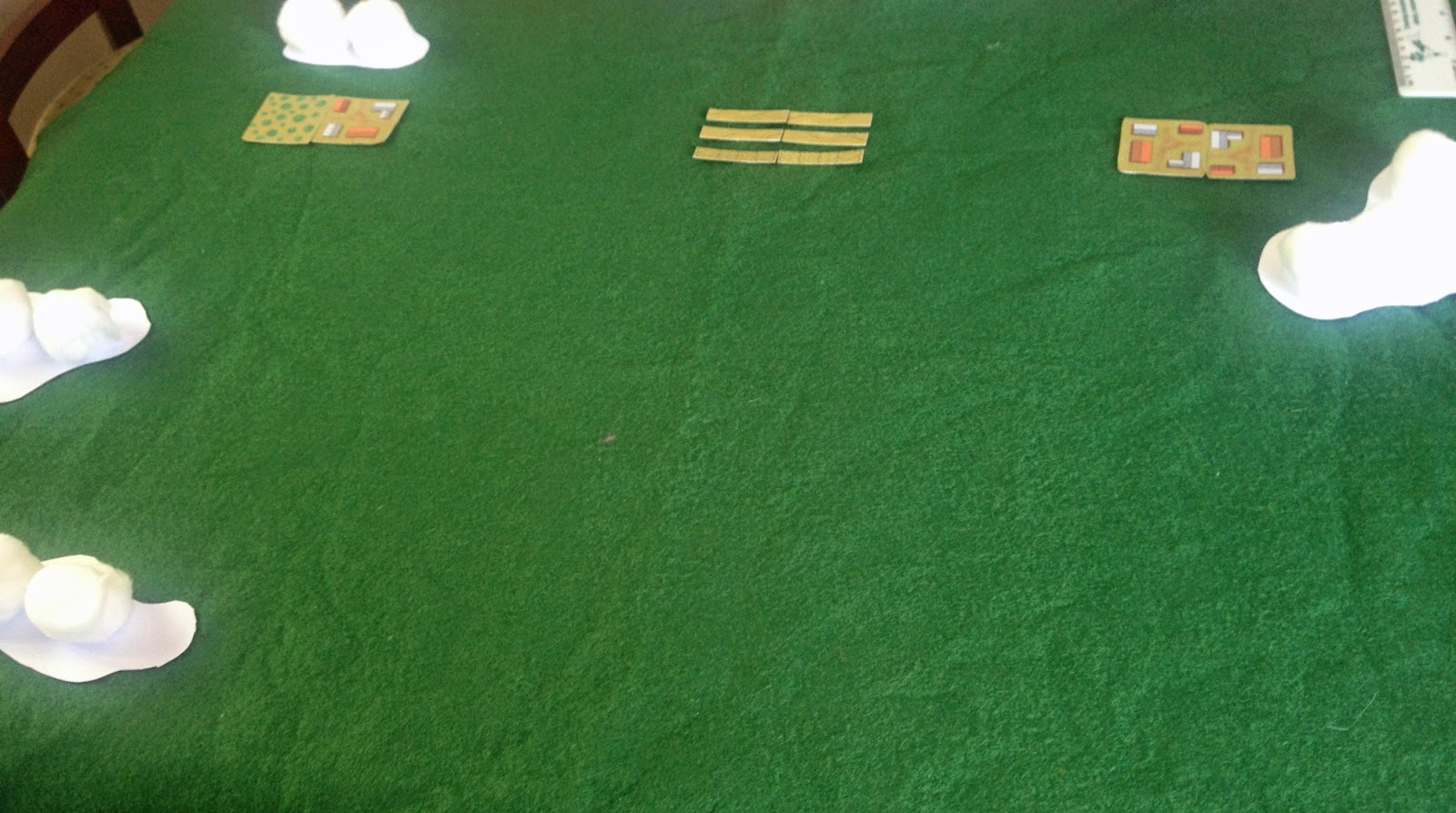 There were three objectives to be photographed. The Germans would enter at the bottom of the picture, one plane every four turns. Hawker started on the other side. Hawker was assumed to have spotted the Germans, whilst they had to spot him. Each German plane had 20 turns to complete its mission.

I didn't keep a detailed log of the game. Hawker started right across the board from the first German to appear, so spent a lot of time trying to close with it. 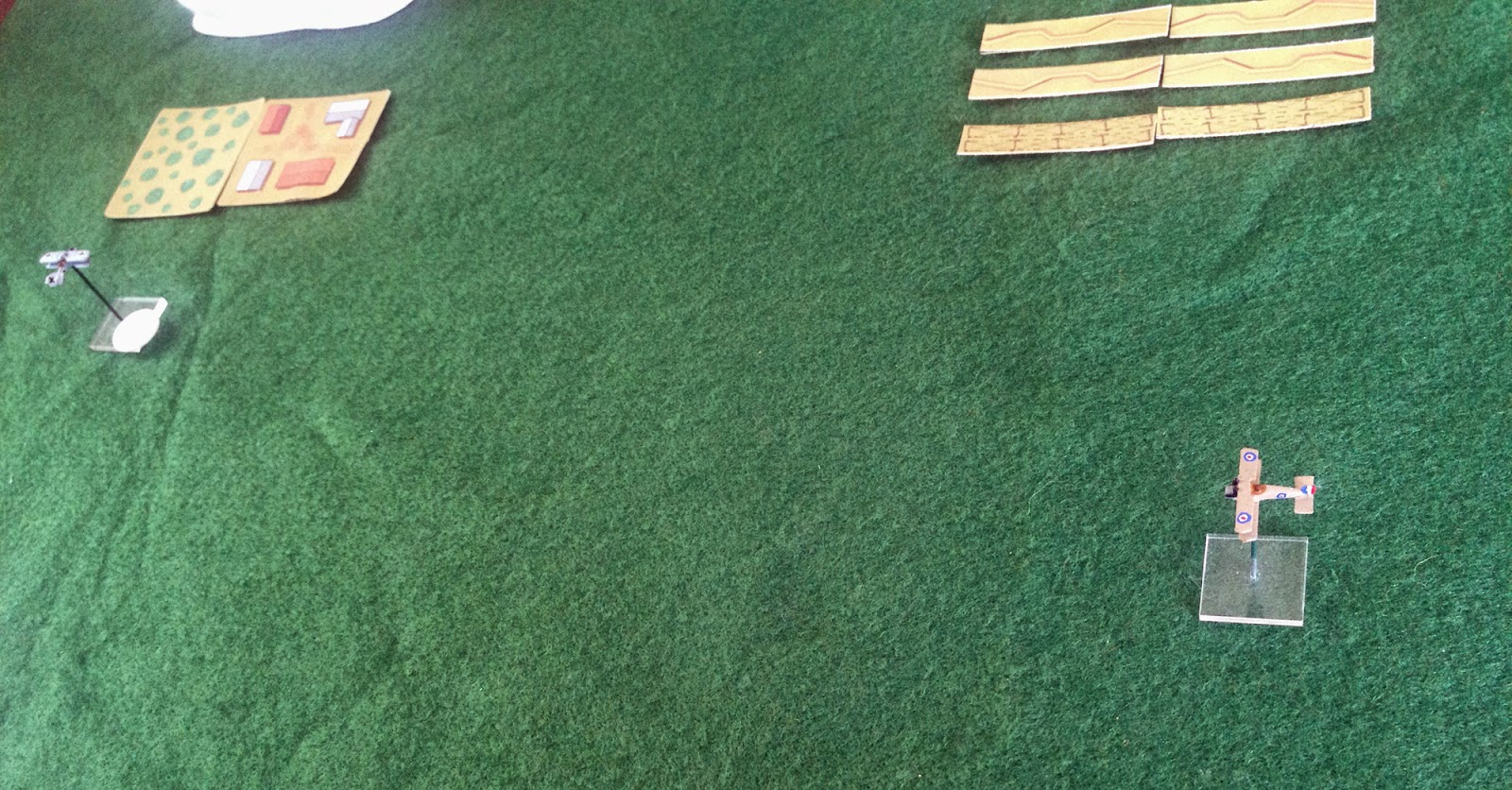 The Germans got their photo, but Hawker shot the observer with his first burst. 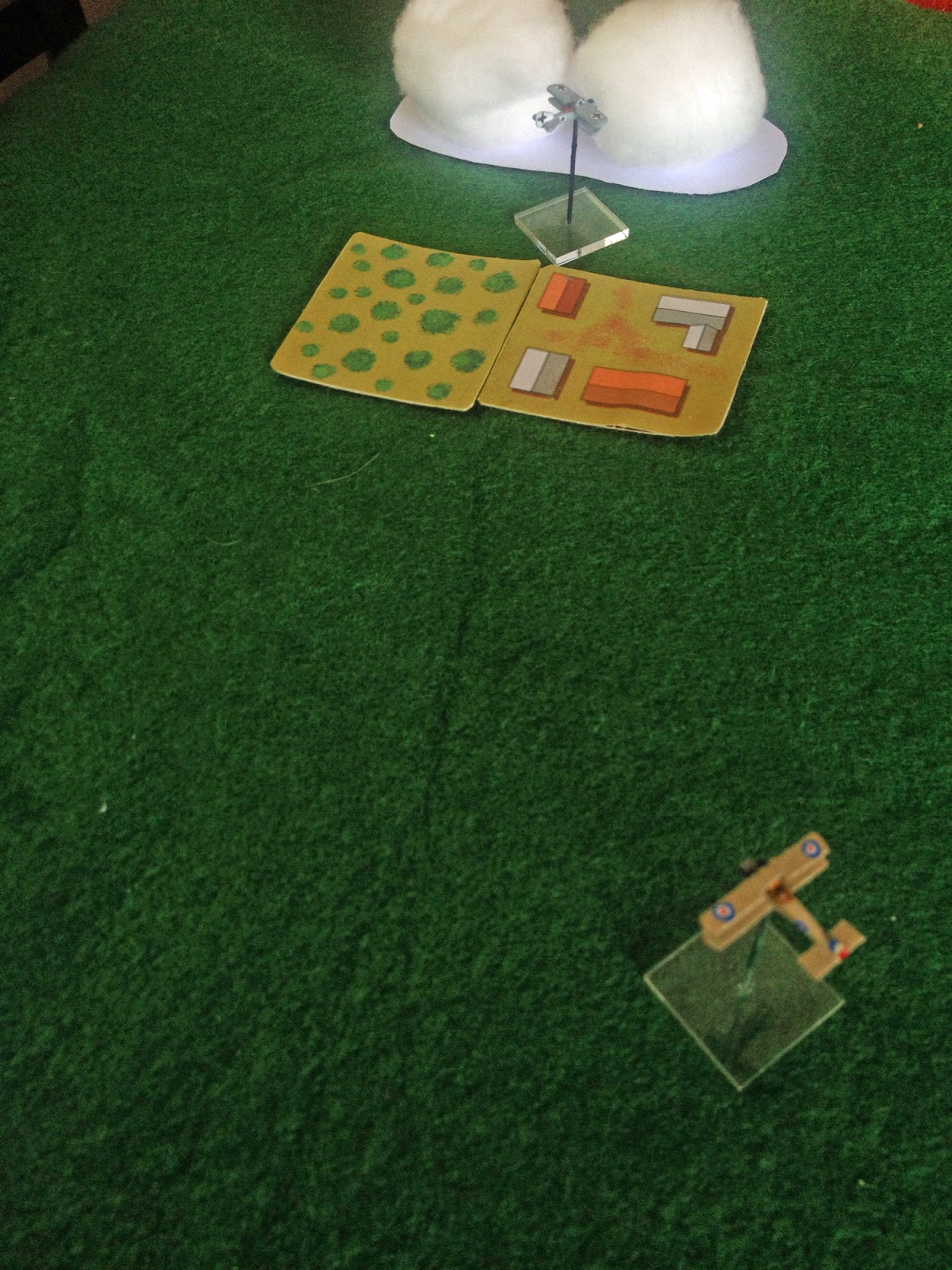 At this stage all three German planes were on the board. The first one, with the dead observer, was heading for home; Hawker just couldn't get another clear shot at it, and there wasn't time to mess around trying to improve the situation. You can see Hawker closing in on another German plane, though. He inflicted some damage on it. 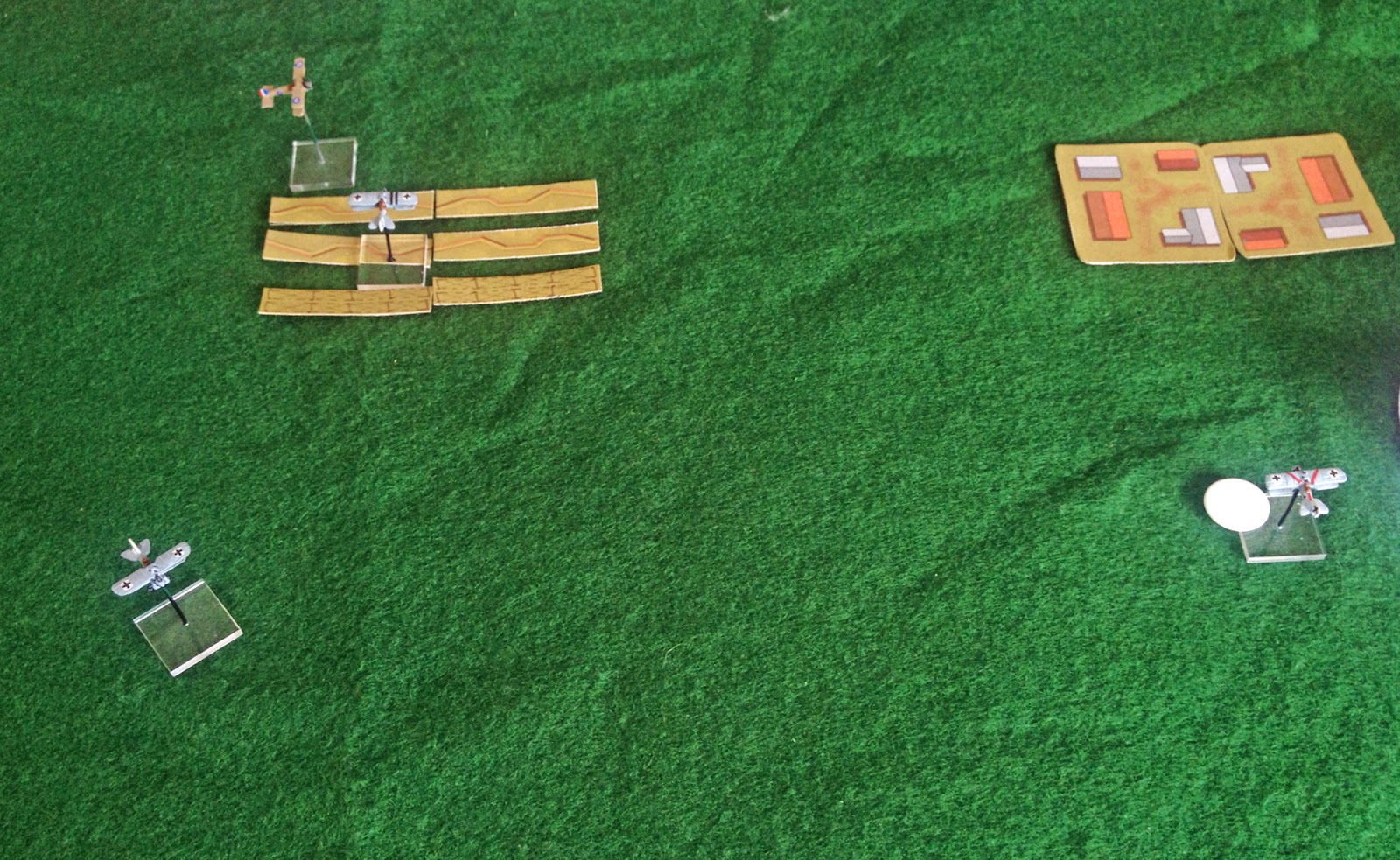 Again, though, the German completed its mission, and Hawker couldn't turn to chase him down. He inflicted more damage, but the second German plane was likely to get away. The real game now became a fight against the third plane. The yellow counter was part of an experimental rule I was trying for aircraft losing power as they turned, 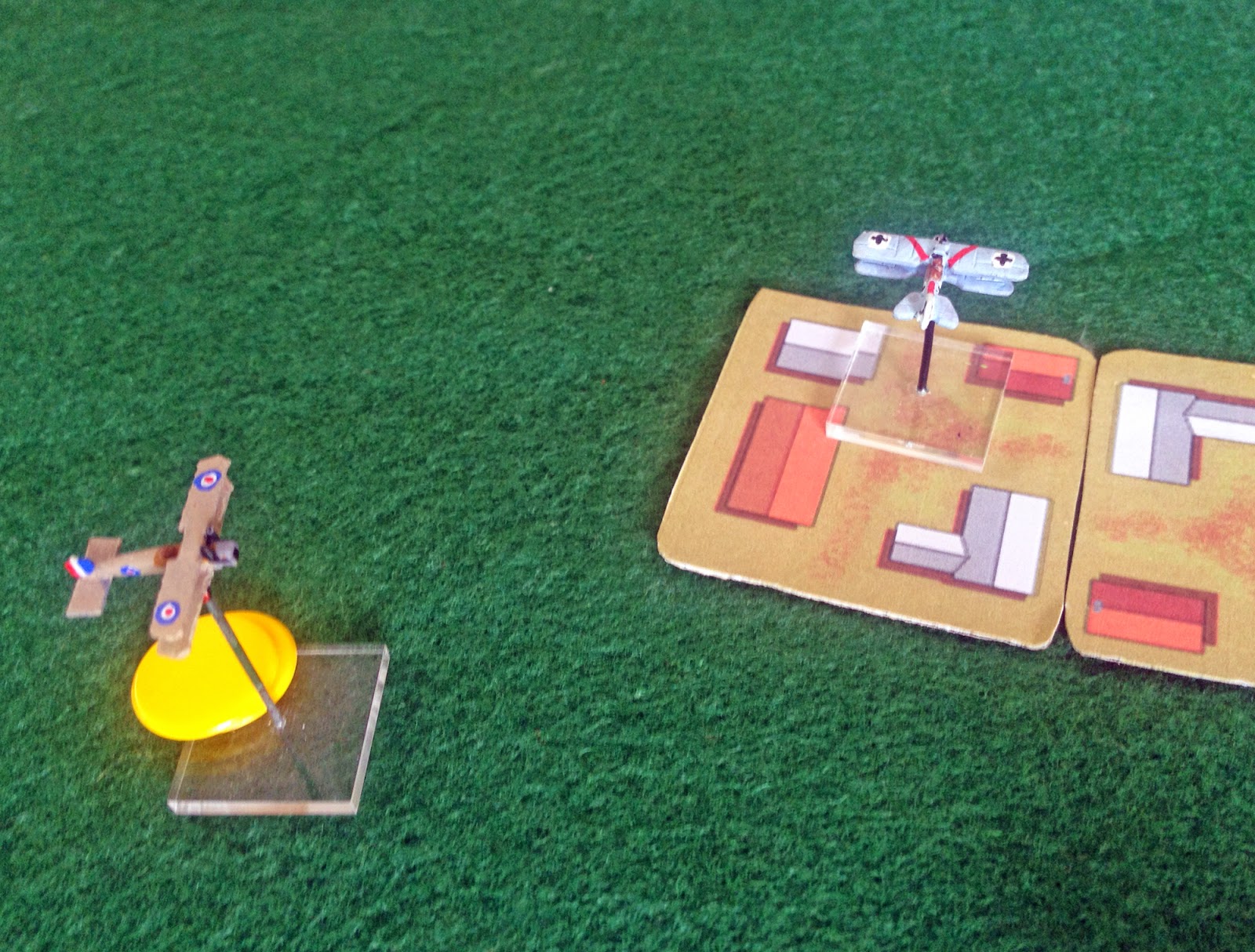 Hawker turned after the third German, and got in some clear shots, inflicting some damage. But the Germans were shooting back, and scored a few hits in return. 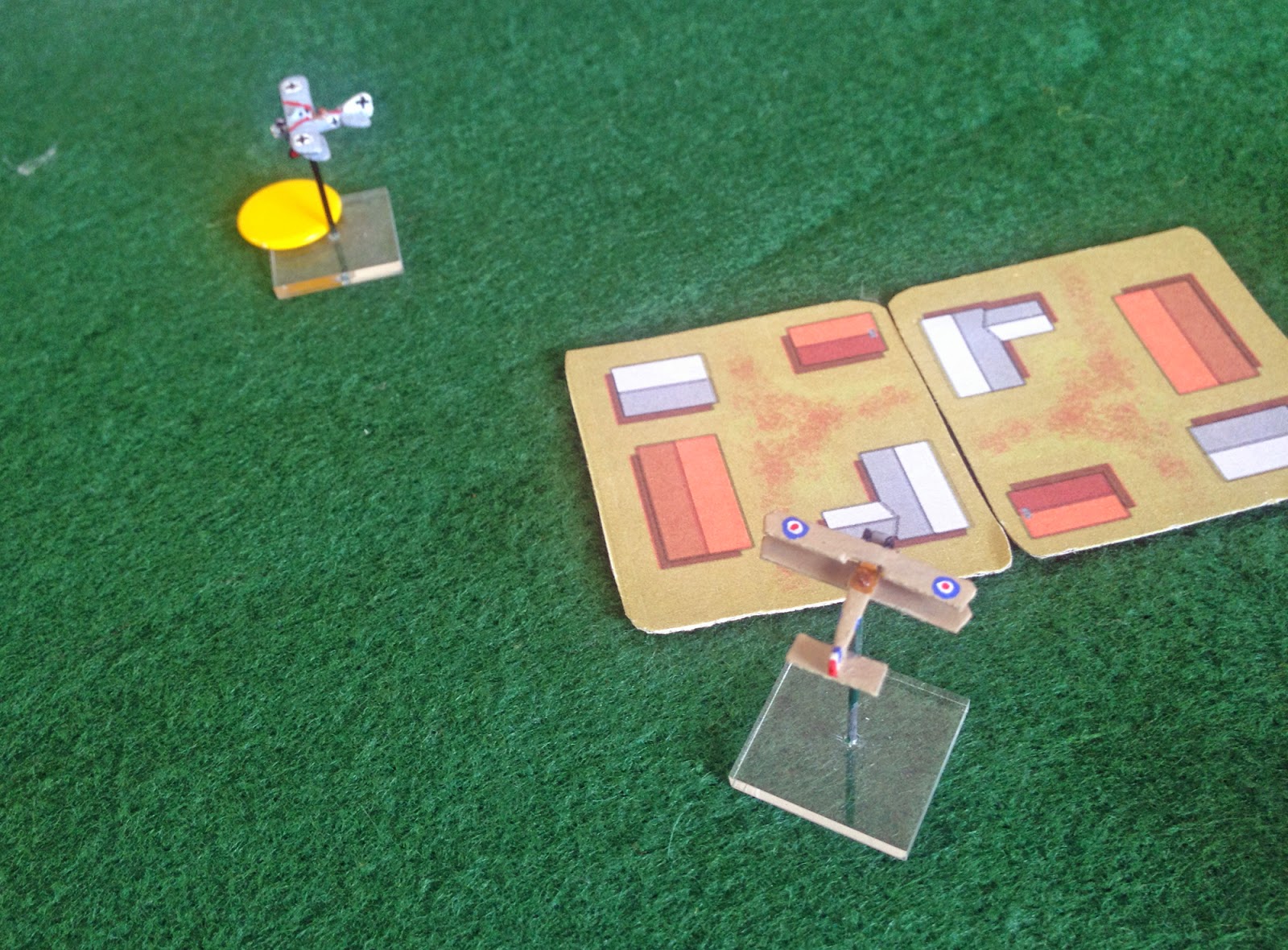 Despite his greater success, Hawker couldn't shoot down the third German plane. He chased it pretty much to its home edge (and took more damage as he did so), but ran out of ammo before he could finish it off. To add insult to injury his gun jammed as it fired the last burst. 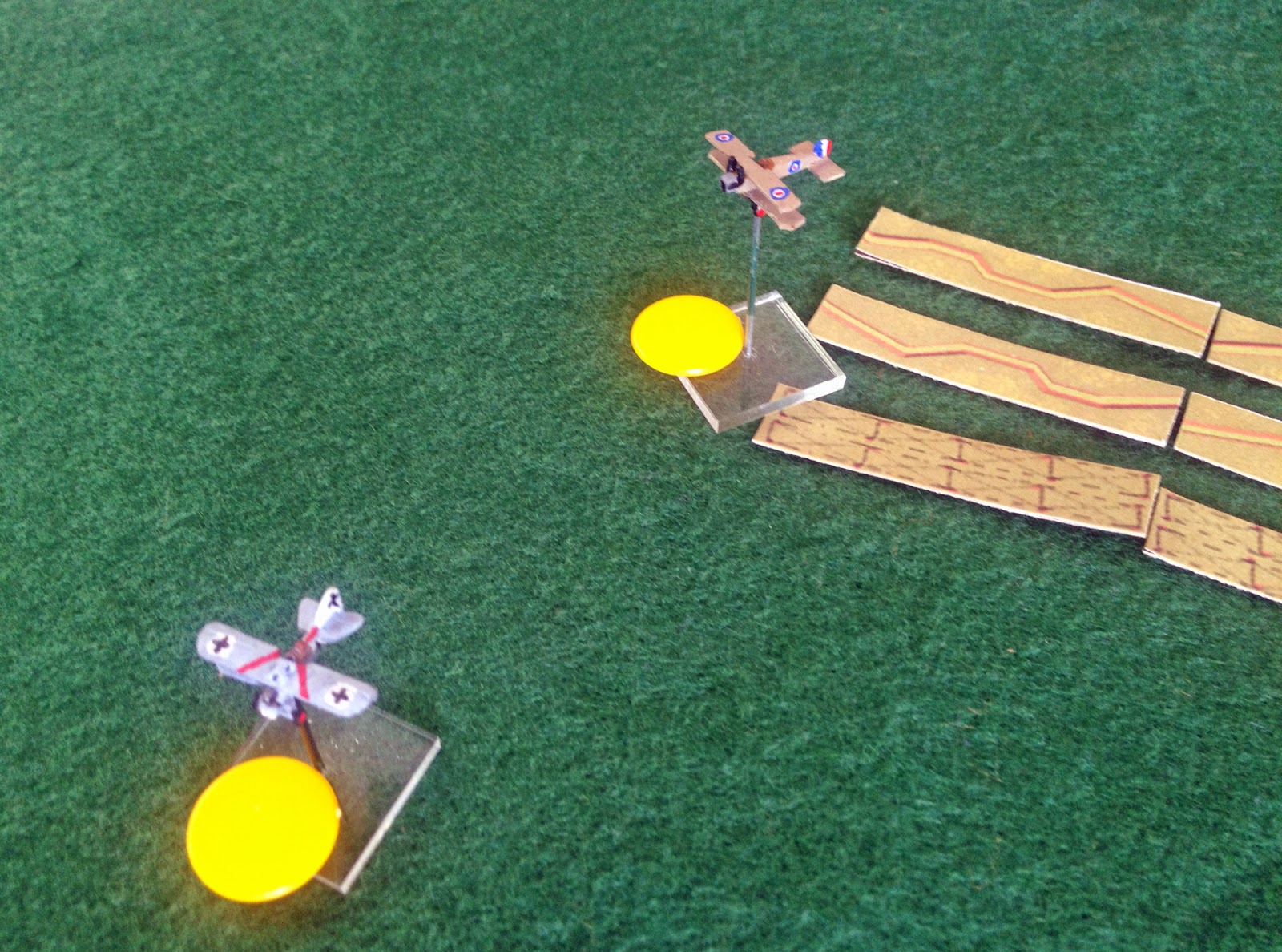 Hawker didn't get his VC, although all three German planes knew they'd been in a fight.

With some tweaking there's probably a fun scenario here. The power rules I was less satisfied with; for the effort required to run them, plus the requirement for markers, they didn't add a lot to the game.

And in case you think Hawker is hard done by, I played a couple of quick games before this one. In the first I reran Hawker's DH2 vs Albatros DII fight against Von Richthofen and despite the Albatros outperforming him, he killed the Red Baron with his first shot. And in the second game his Scout with the lashed-up Lewis was quite sufficient to force down a single DFW in the first burst.
Posted by Kaptain Kobold at 12:01