The Battle of Oudenarde

After Blenheim and Ramillies, this was the latest in Caesar's Marlborough scenarios for 'Maurice'. We played it as a doubles game, with Ralph and I being the experienced players on each side, and Austin and Dave learning as they went on.

Oudernarde was a French attack on an Allied bridgehead over the River Scheldt. Being the Low Countries, the battlefield was very damp. 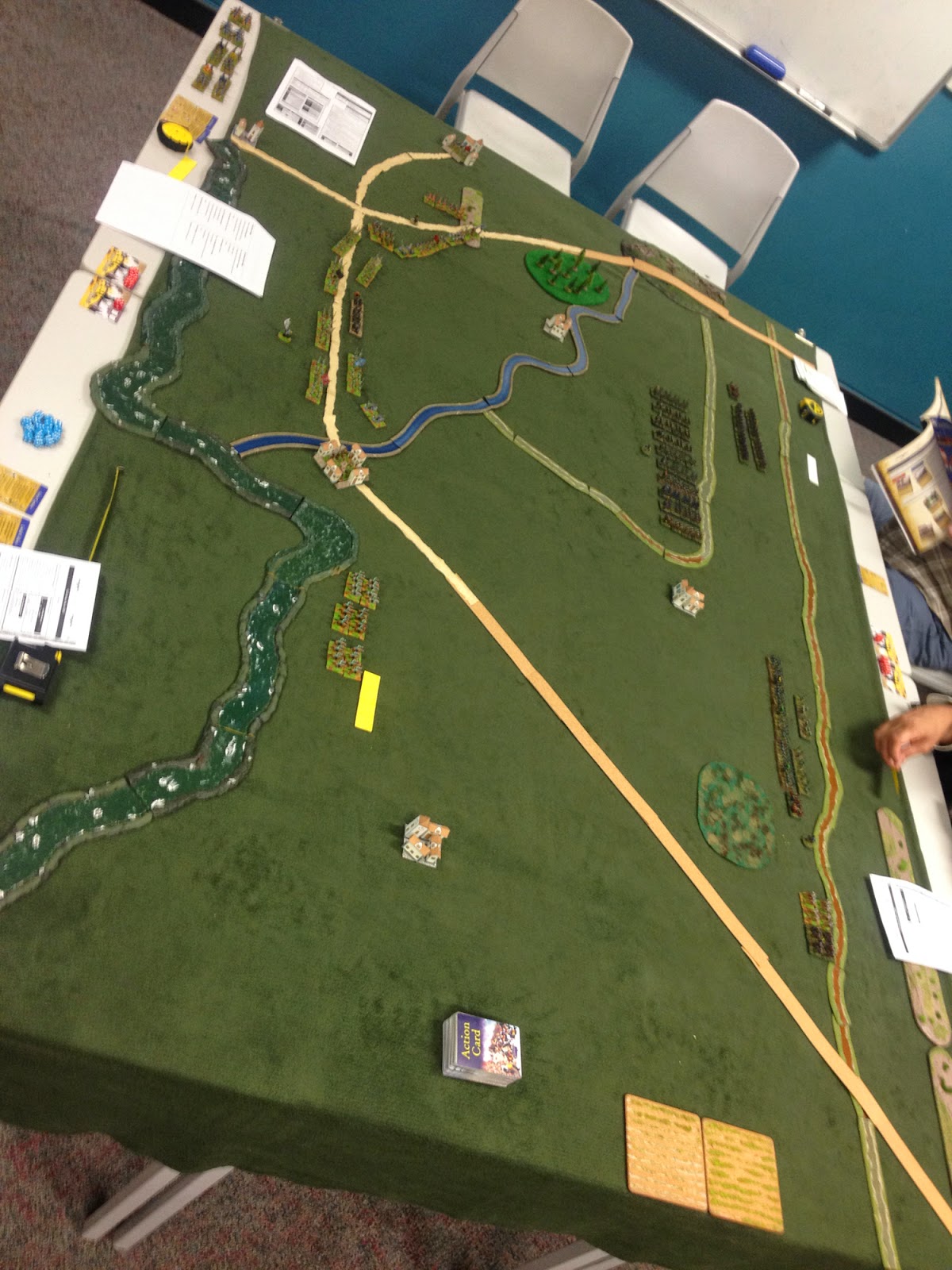 Austin and I played those jolly allies, Marlborough and Eugene. We had a small force covering the town of Oudernarde (the French objective), and the promise of reinforcements to come.

Ralph and Dave played the French - Ralph the rash French C-in-C (whose name eludes me), and Dave the tardy Duke of Burgundy. What could possibly go wrong?

Here's a view down the French lines. Once again we used whatever figures we could muster, so our armies were made up of a mix of Caesar's Imagi-Nations ("Why are my troops marching under a flag with a teapot on it?") and my GNW Russians and Swedes, in their Painted, Based and Varnished debut game. 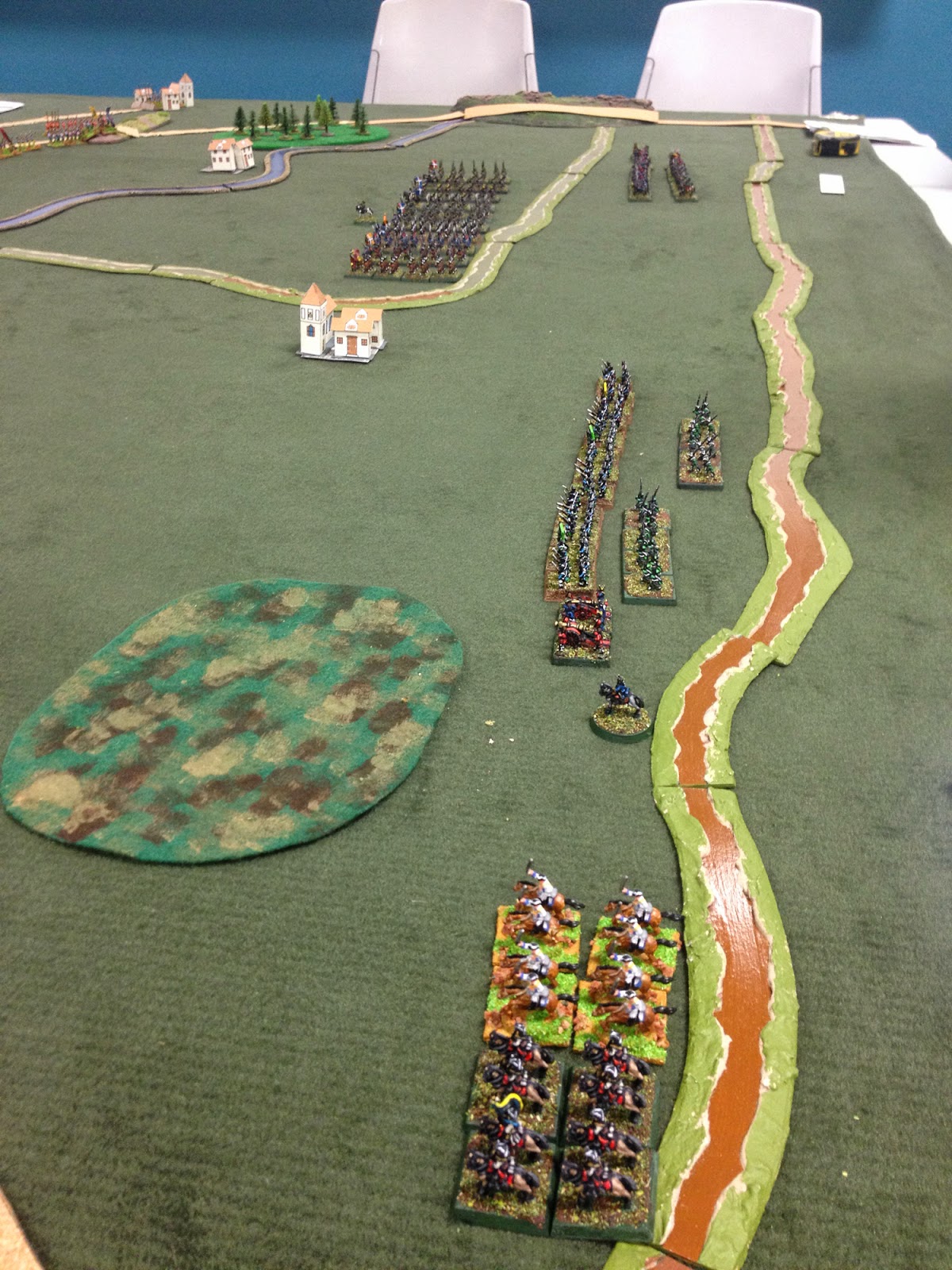 The French had lots of infantry. There was also the promise of reinforcements coming in on our right flank. 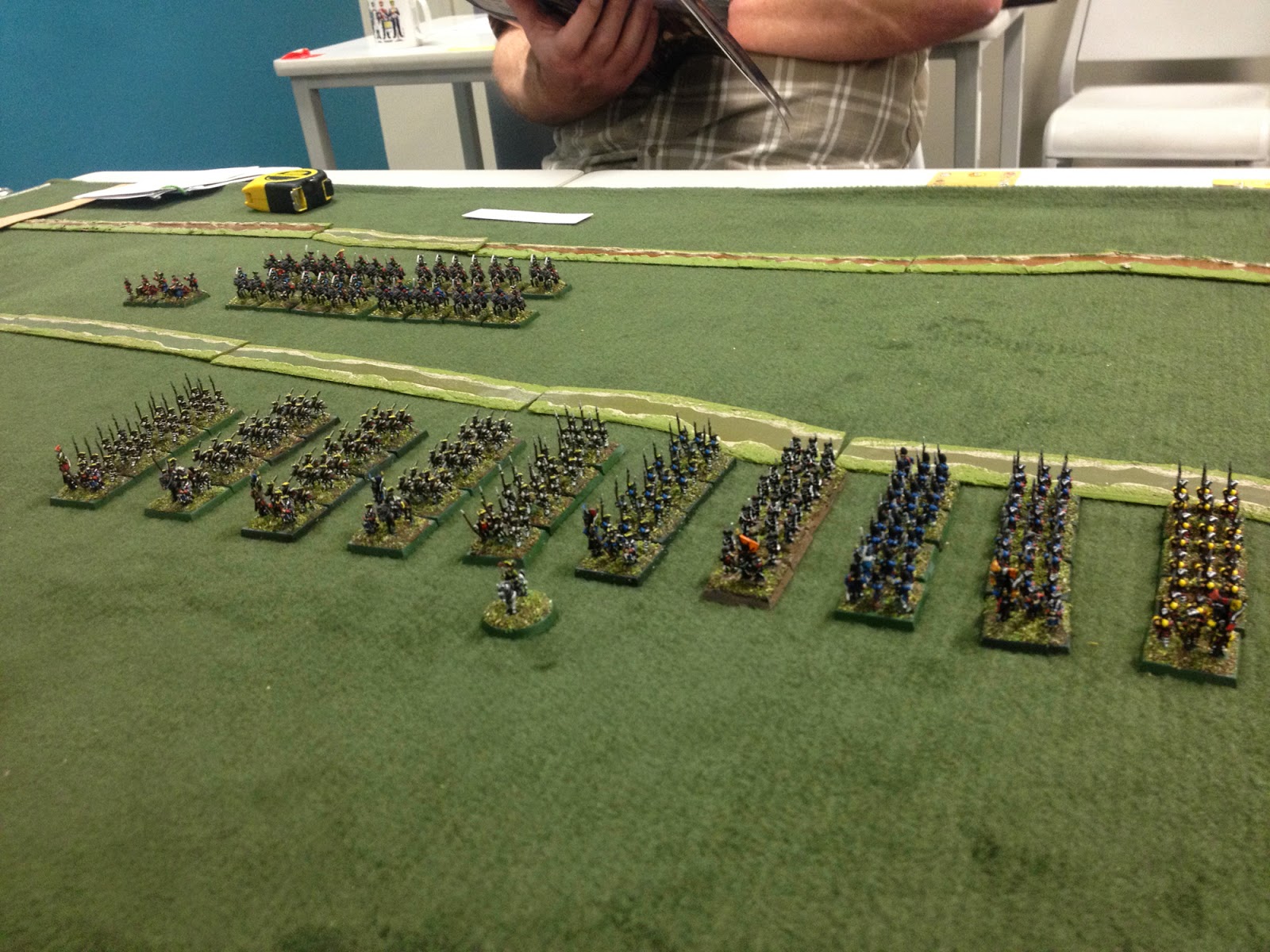 The heroic Allied infantry; stout chaps who eschew the consumption of garlic and frog appendages. Many of them seemed to be wearing borrowed Russian uniforms. Apart from the ones who looked like Swedes. And a lone elite unit who had come to the party as Prussians.

Anyway, we formed up in a double line and awaited the inevitable French advance. 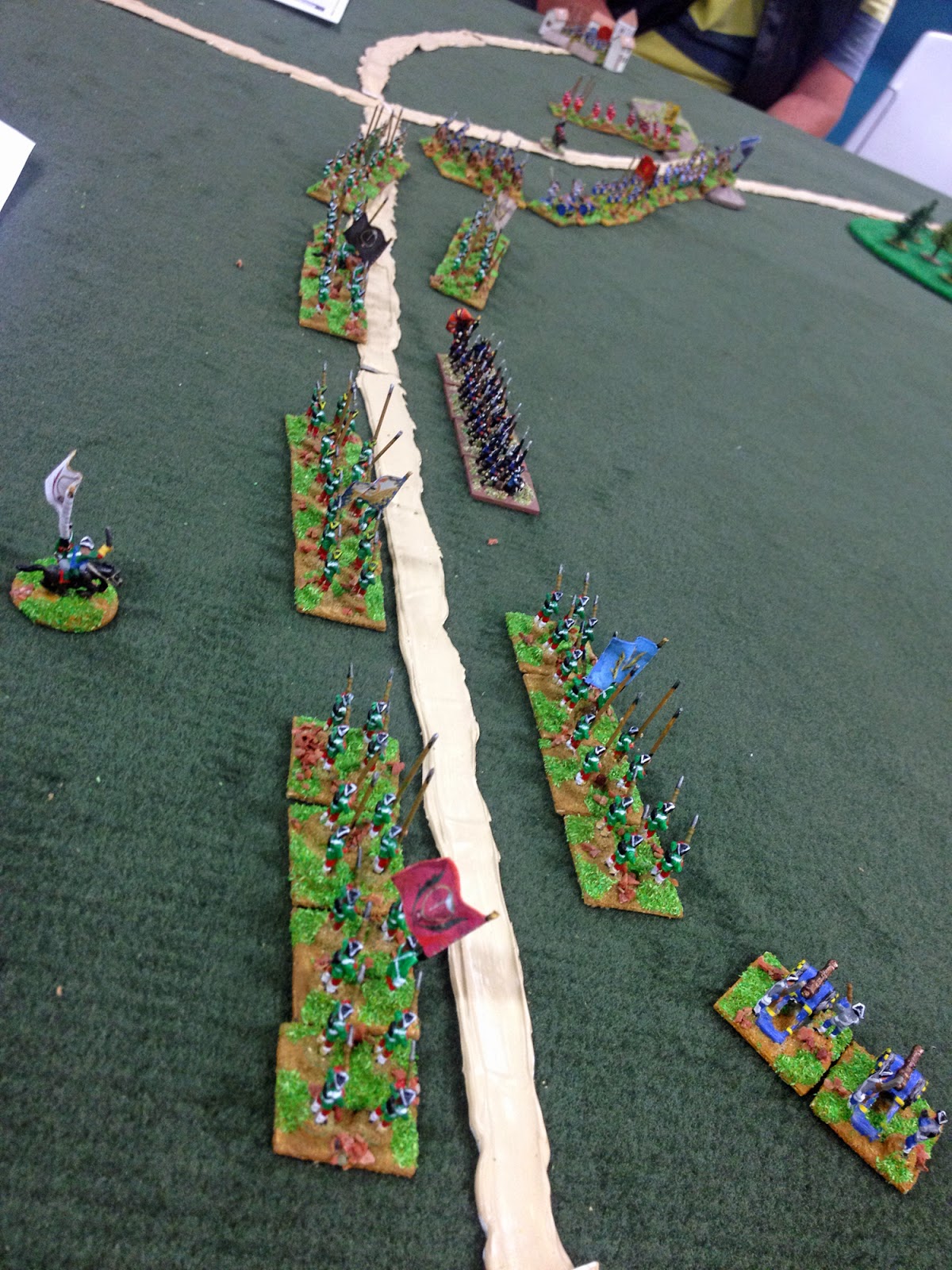 Dave also had a shed-load of infantry, the photo of which was so blurry that I won't bore you with it. Since it, and the promised French reinforcements, threatened our right flank, I garrisoned the village that covered that end of our line. This had nothing to do with me wanting to try out my new buildings. 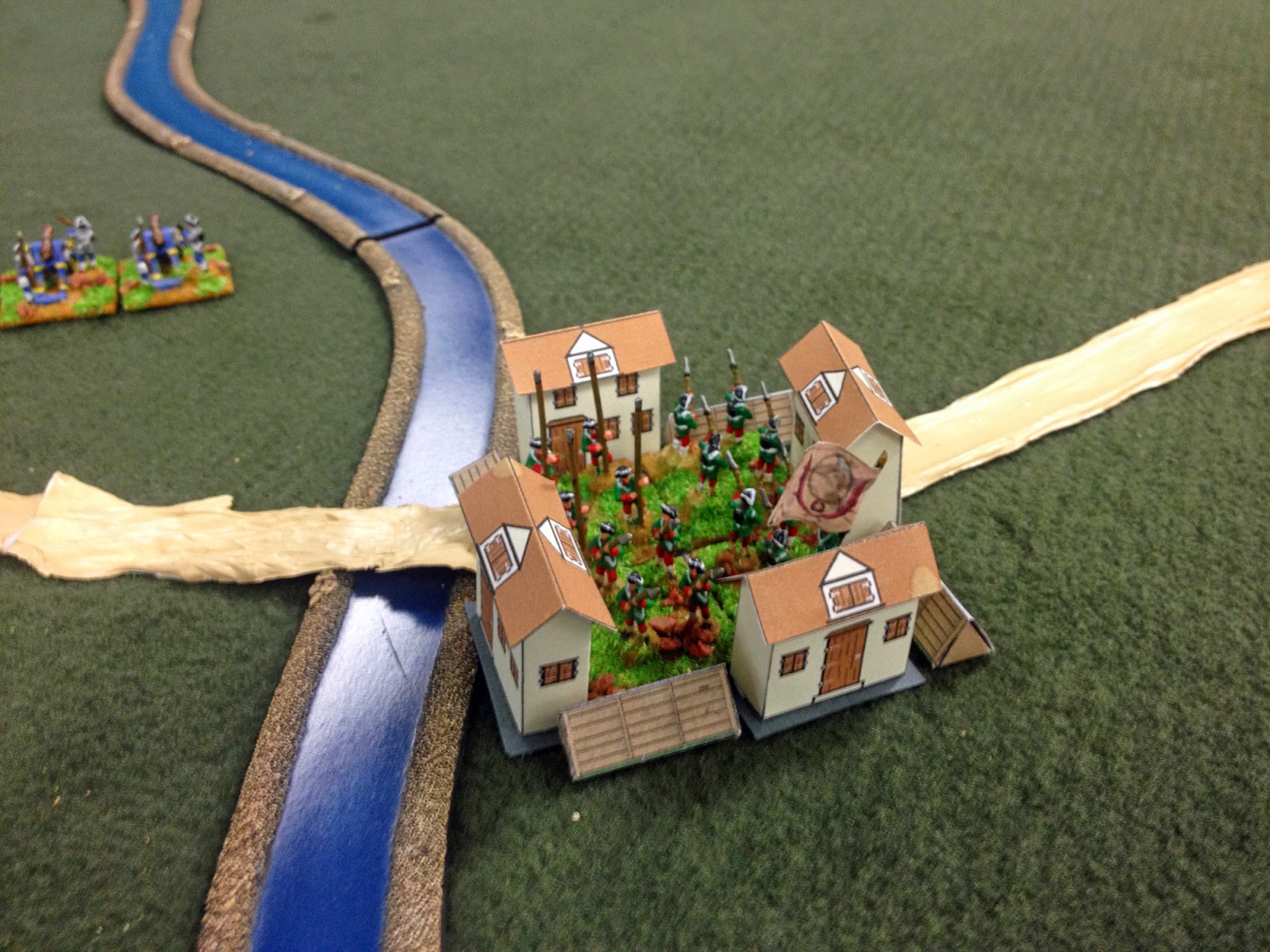 The other end of our line, with the French infantry beyond it. Ralph is, at heart, a Frenchman from a century later than this period, so formed them into column and prepared to attack. He had the bayonets advantage, so it wasn't a bad plan on paper. 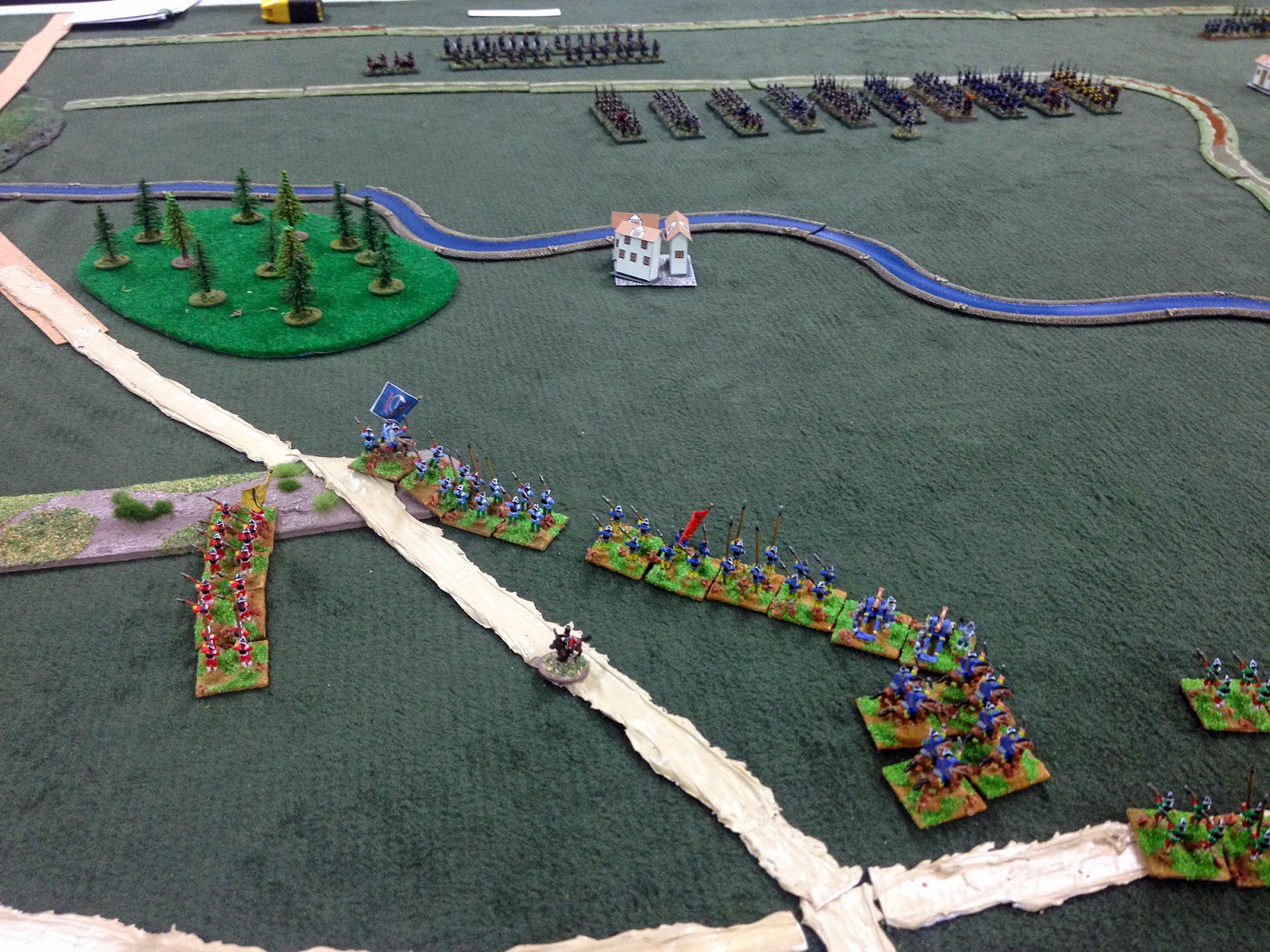 The French attacked, although some confusion about changing formation in this more stately era left them trying to form up into line in range of the rather effective Allied musketry. Our plan was rather simple - let the French get partially across the river (which they did without disruption thanks to a well-timed card), then move in close and blow them away with gunfire whilst leaving them no room to maneuver.

It worked quite well. 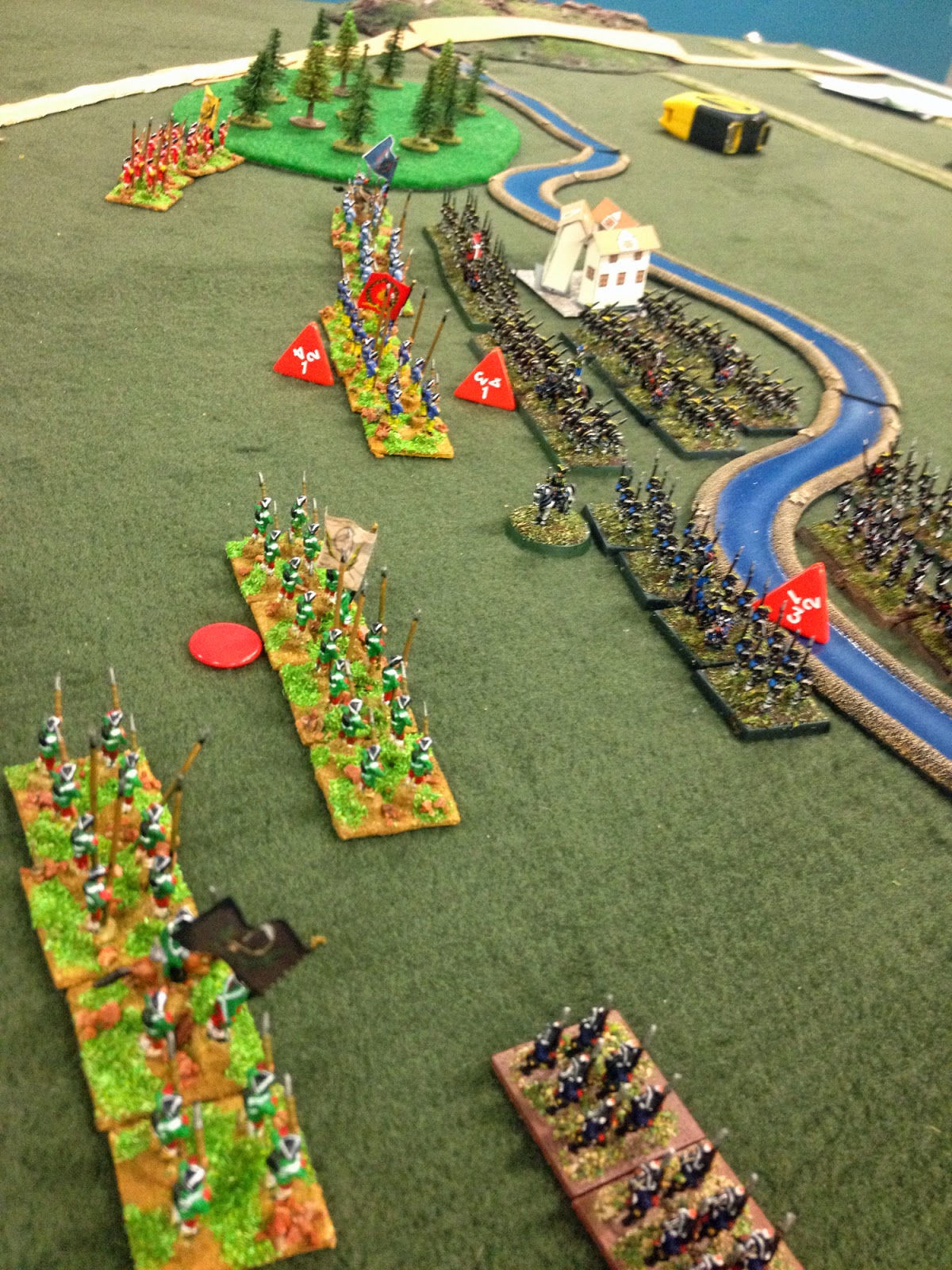 Once our infantry were nicely ensconced in a firefight, I switched Eugene to our other flank where my cavalry were lurking. The Duke of Burgundy, under Dave, was advancing his infantry to support Ralph, covered by his Guard cavalry. I moved up my gallant cavaliers to oppose his (who apparently regard horses as not only the best way of engaging in warfare, but as part of their national cuisine as well). With his attention focused on the cavalry battle, the Duke of Burgundy stopped advancing his infantry, buying ours a bit more time.

Guard cavalry are a tough nut to crack. It took a few useful melee cards to hold them off, and we still lost one of our cavalry units. 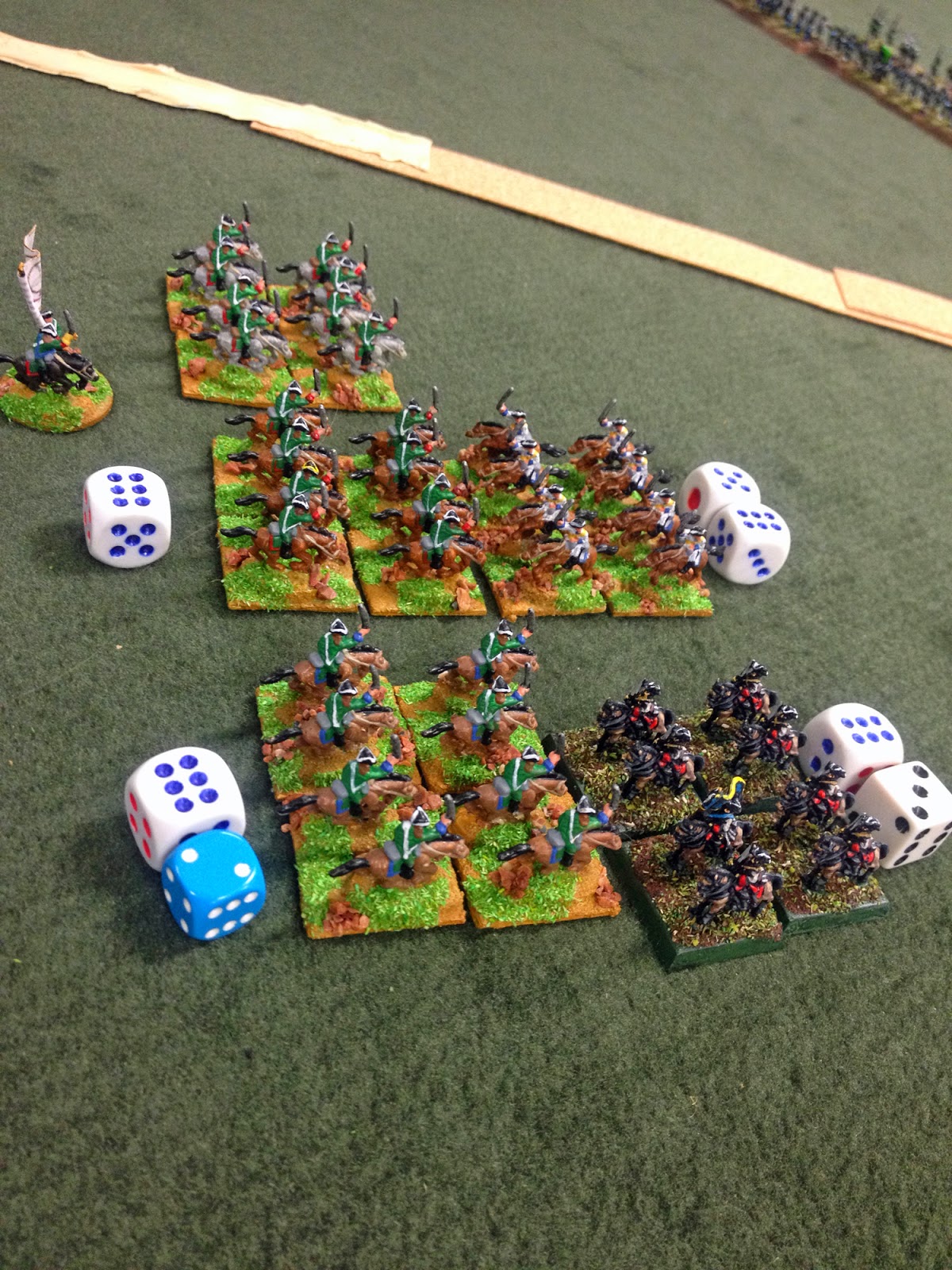 Back at the main fight, Ralph was losing infantry units to our Lethal Volleys, but stuck to his plan of charging, charging and charging again. We responded with every melee bonus card we could slap down on the table; a number of our units held off potentially deadly attacks only by virtue of a card-given bonus. And, of course, every time a French attack faltered and pulled back we blasted it with musketry. The French morale was now looking rather shaky. 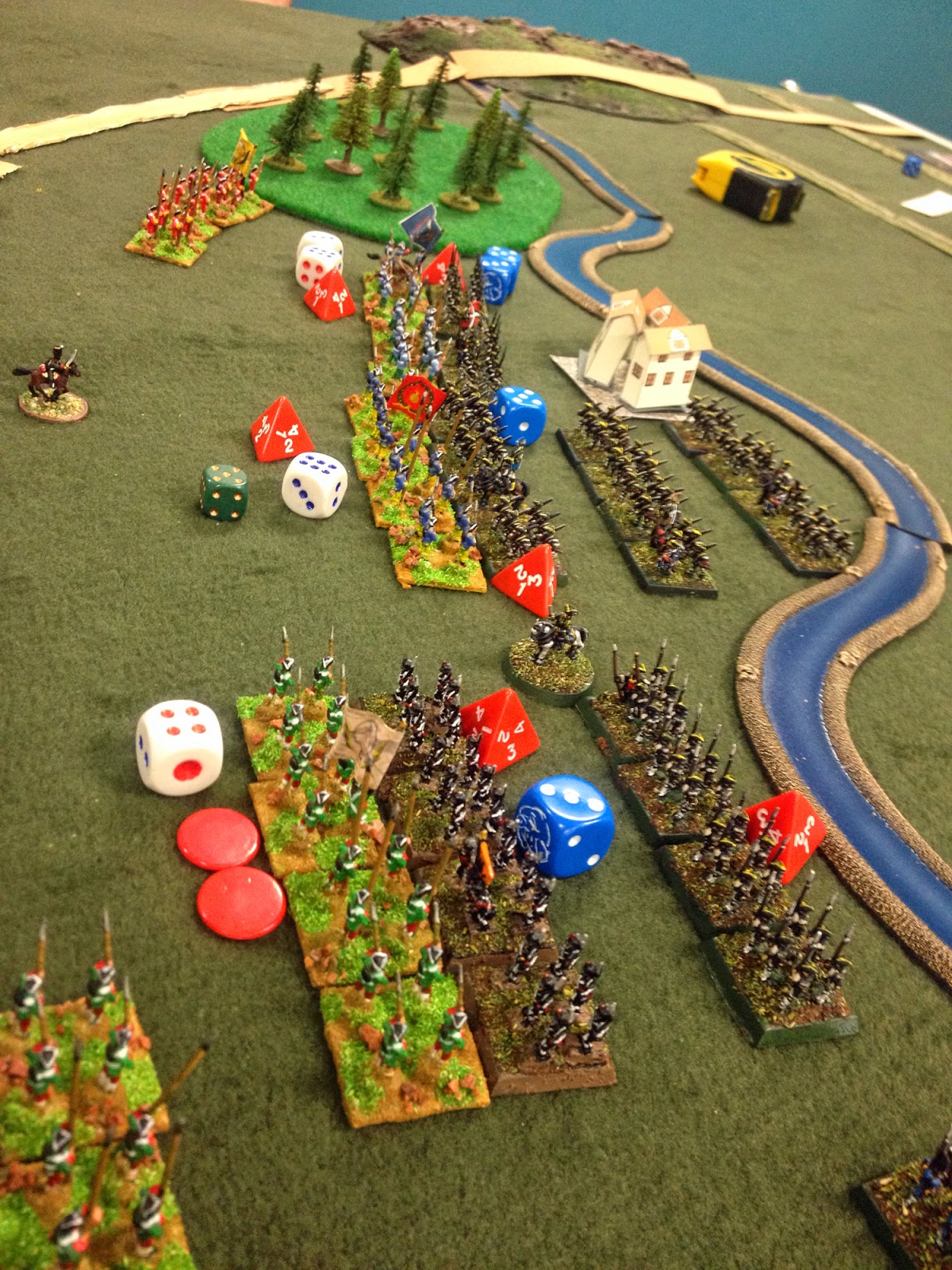 The French Guard cavalry charged and swept away one of our - MY! - cavalry units. The dogs! 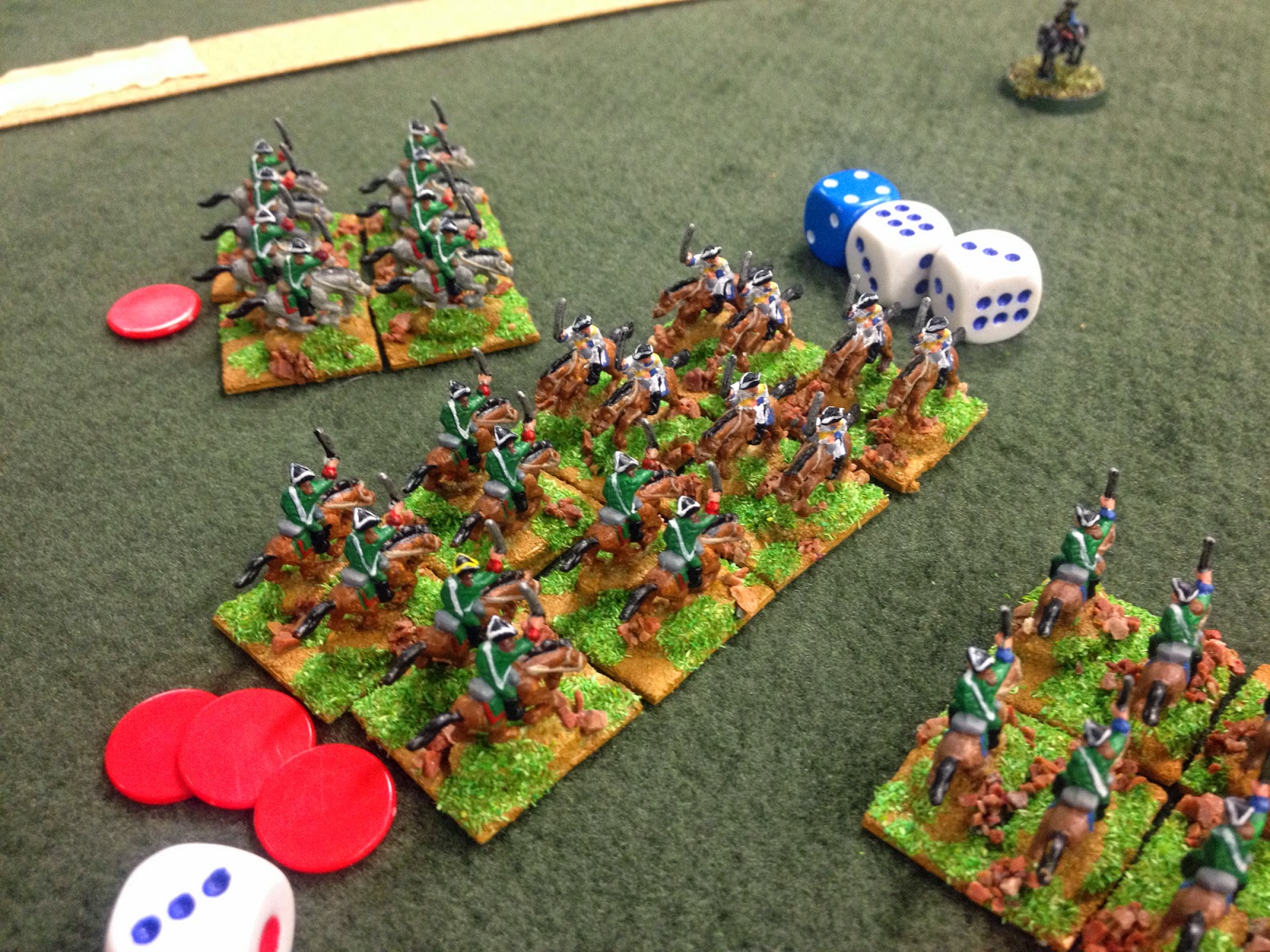 "You have a flank attack there", said utterly neutral umpire Caesar (born in England). So we charged it. Au revoir, French Guard cavalry. 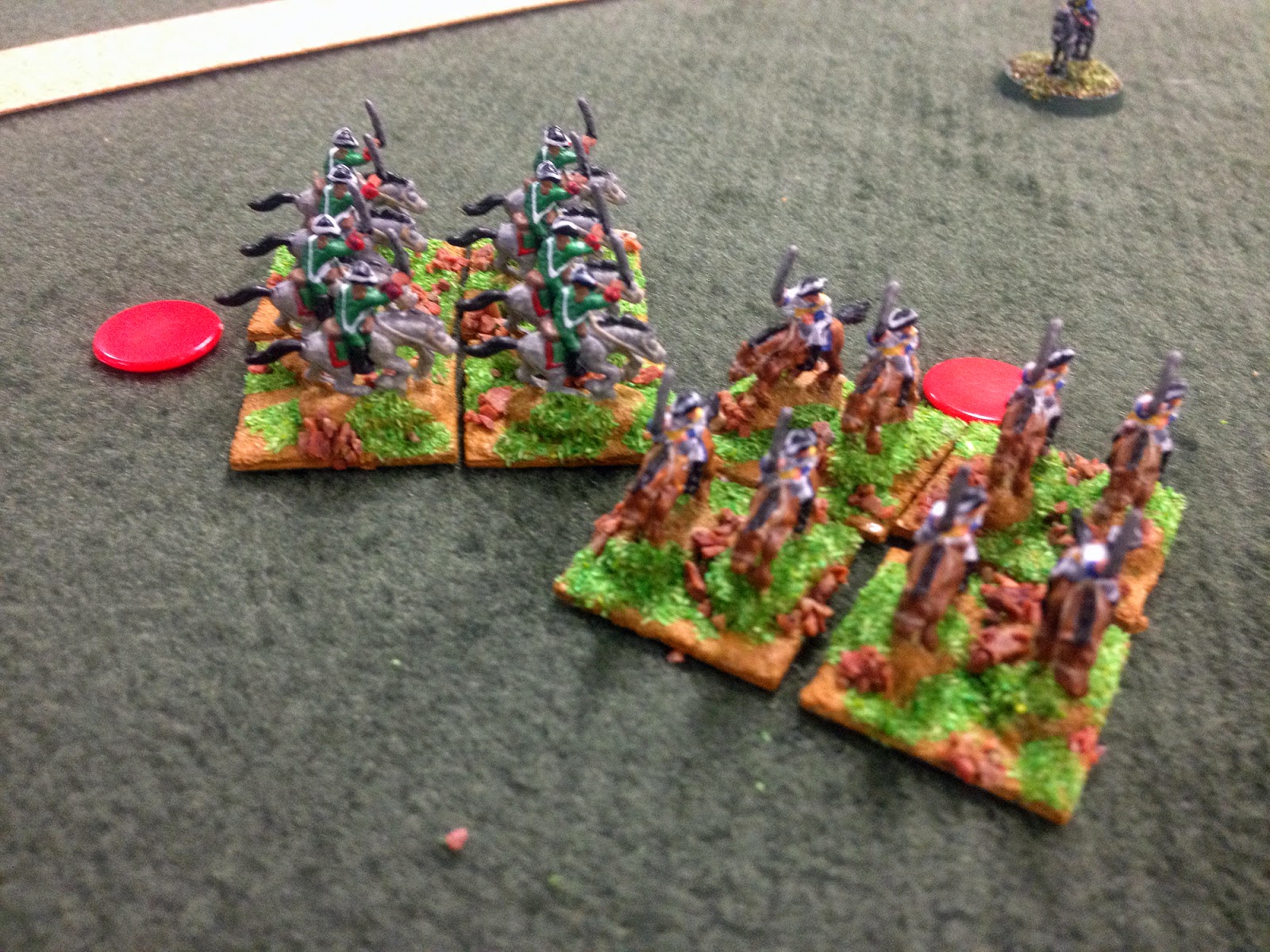 This put the French down to one point of morale. "Don't worry," said Ralph, "There's a card we can play to increase our army morale!". "We know," we said, "We've got it."

Here's the Duke of Burgundy, pictured just before a stray cannonball took off his head. Austin had been hoarding the 'Death of a Hero' card for most of the game, and played it. Away went the last vestige of the French will to fight, and Marlborough/Eugene had won themselves another famous victory, plus piles of cash from their respective grateful sovereigns. 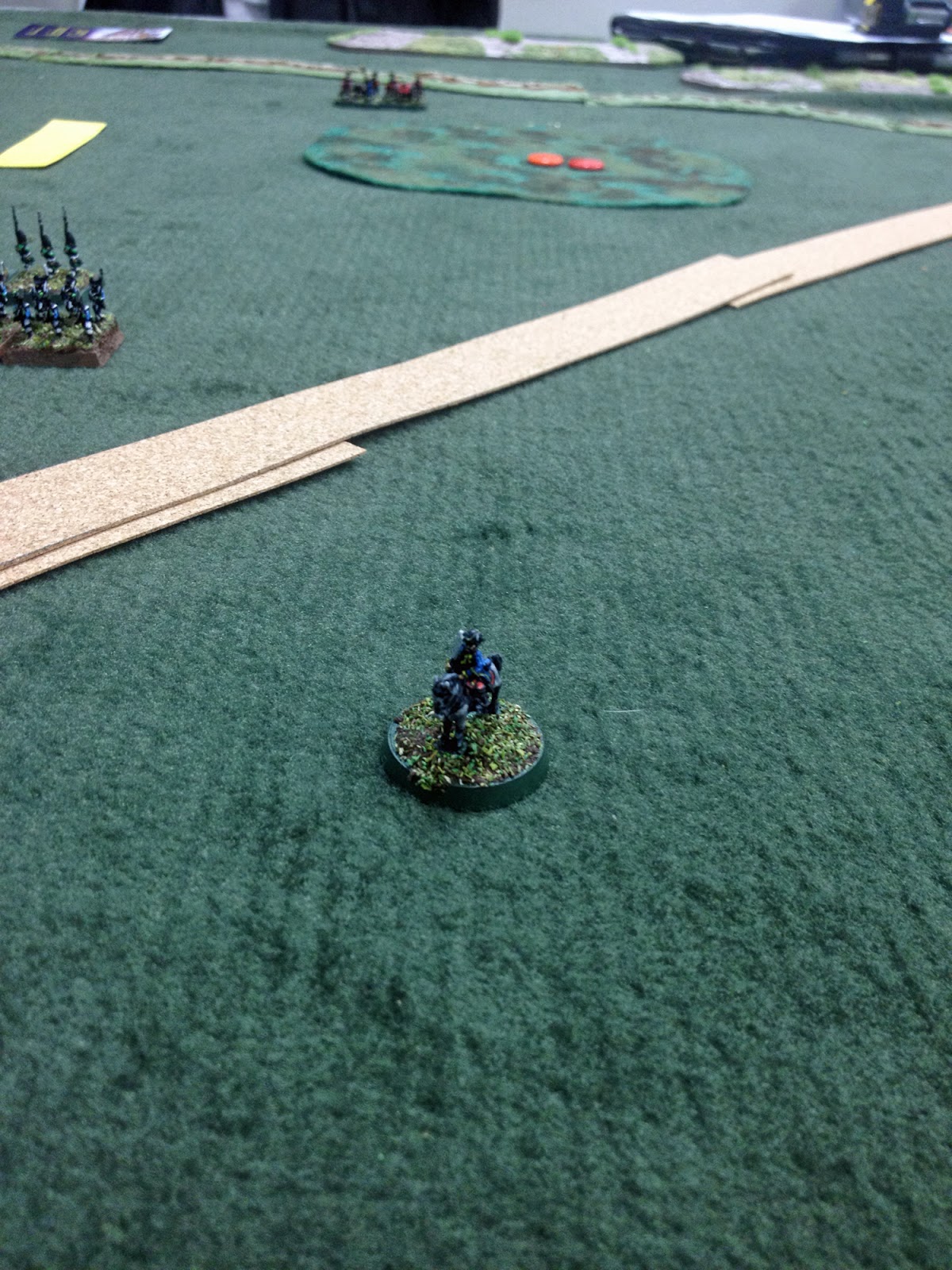 The French slunk away, secure at least in the knowledge that their cavalry losses, combined with the amphibian-laden marshes through which they were retreating, meant that they wouldn't be going hungry any time soon.

Truth be told this was a difficult mission for the French, with the two parts of their army separated, whilst being on the offensive. Apparently it went pretty much according to history, with the one wing attacking aggressively whilst the other dithered. We suspect that the French need to bide their time in the early part of the game, and get all their troops together first. The downside of this is that it gives them less time to mount the attack before the decks run out, and that it gives time for the Allied reinforcements to appear. Of course the French have reinforcements too, but with hindsight I suspect they appear too far from where the main battle is fought to be of any great use.

The Allies are in a strong position, with villages to fortify and an impassable river to cover one flank. We were able to concentrate the battle into a limited area, where the French numbers didn't count for much and where our superior firepower gave us the edge. And, with any game of 'Maurice', switching the focus of the battle at a key moment paid dividends; a handful of 'Co-ordinated' cards helped there.

Thanks to Caesar for organising a great scenario, to Austin for falling in with my cunning plan, and to Ralph and Dave for being gallant opponents, even if they were French.

The game took us just under three hours to play (excluding setup), and we didn't finish the first deck.