I played a couple of games of Battlesworn this afternoon.

In the first game I ran Dwarves against Uruk Hai again. I set up some terrain, and ended up with the river scenario from the book. I played the Dwarves and soloed the Uruk Hai. The warbands were slightly different from the previous game:

I assumed units set up normally in their own half of the table rather than on their own baseline. The scenario would probably work OK with either setup. In the middle the river crossing is easy, but on the flanks are two tricky fords. The aim is to have more figures on the opposing baseline than your opponent has on yours. 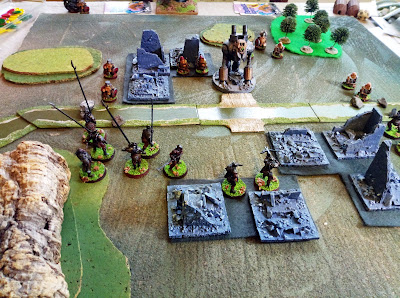 The Dwarf Giant is a model I printed off for giant monster gaming a couple of years ago, but decided was the wrong size. I might add some crew. Anyway, I decided to use it to rush the ford in the centre, supported by the musketeers. 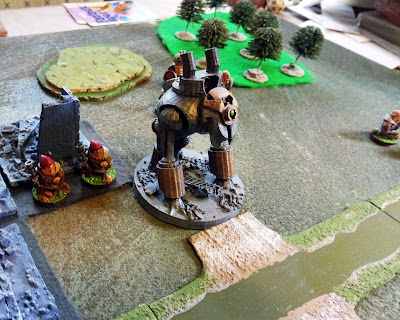 The Uruk Hai used their crossbows to cover the ford, with some warriors and their berserker ready to move up in support. 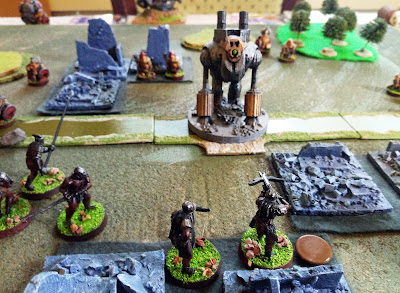 Both sides had troops ready to move across the difficult fords as well. 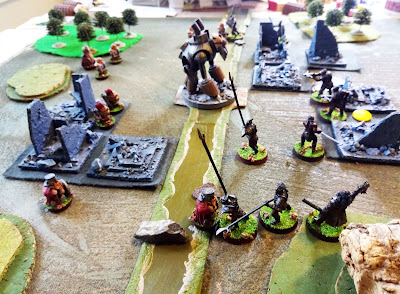 Surviving fire from the crossbows the mechanical monster moved across the ford and attacked one of the Uruk Hai, knocking him flying (a trait of the Giant class). 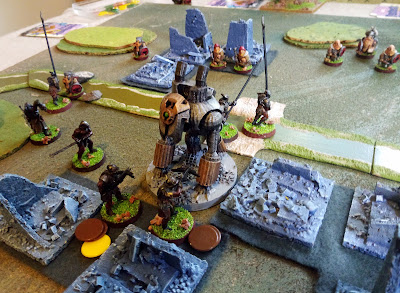 The Uruk Hai sent in their berserker (they had no choice) supported by their leader. The berserker died almost immediatey. The leader was hurled back. 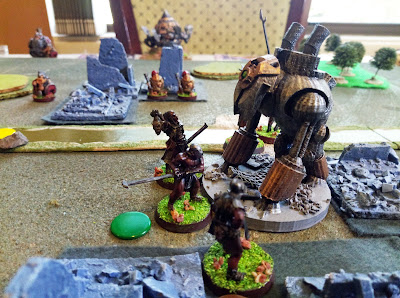 On the flanks neither side was gaining the upper hand at the fords, but both were taking casualties. 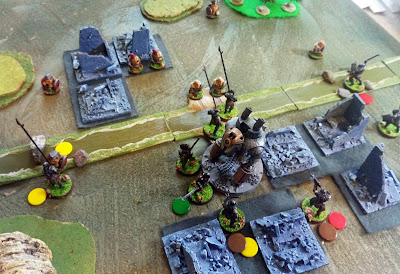 The Dwarven musketeers moved forward. They'd already picked off a couple of Uruk Hai and were looking for a wider field of fire. 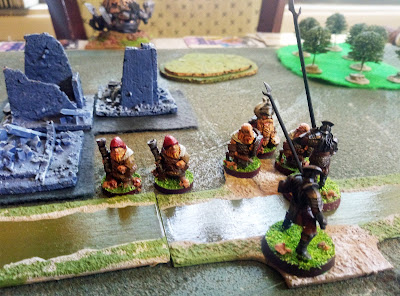 The machanical giant was now lined up to run for the enemy base-edge, but the Uruk Hai leader charged in again. 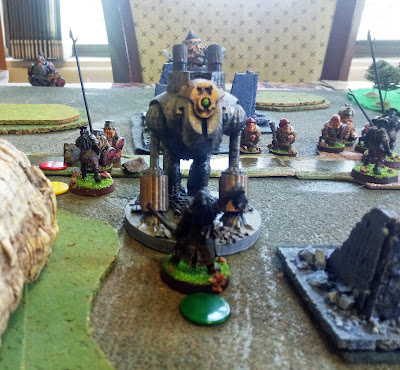 The game was nearing its end now, and the Uruk Hai were struggling to make a crossing anywhere. 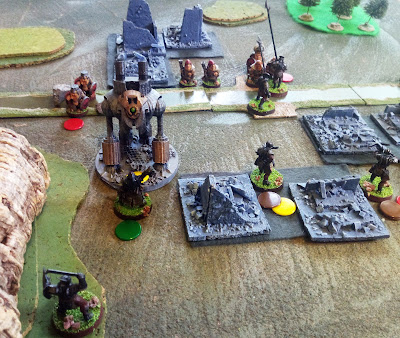 The leader was hurled away from the giant, but another Uruk Hai stepped forward into the fight. 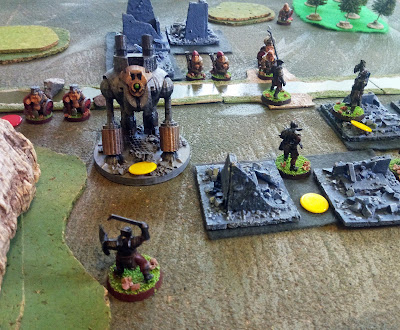 And the giant was destroyed. But it was the final turn, and ongoing melees elsewhere saw more Uruk Hai fall. Neither side had gained a foothold on the enemy's side of the board, but the Uruk Hai warband now had more dead and wounded than it had other figures, so was broken. 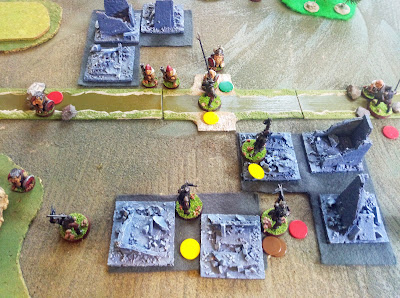 To be honest for this particular scenario the terrain was too dense. Figures could cross the river, but there was too much movement required to be able to get to the board-edge objective. Still, it was a fun and brutal fight. The rules for how giants hurl figures away from them could be clearer though.

I set up a second game, and played the Yokai against some NPC Goblins:

The scenario was King Of The Hill, which is one by whoever controls the plinth in the centre at the end of 15 turns. I used the 10 card initiative deck; at the end of the tenth turn I randomly dealt five cards to both sides for turns 11-15.

This was the setup. 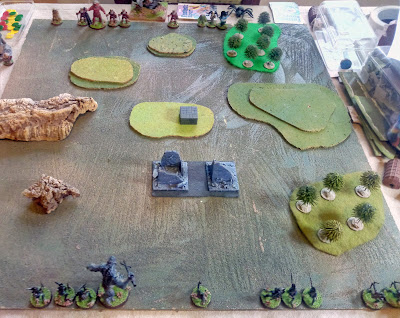 Both sides rushed figures to the centre; the Goblins sent their troll, whilst I sent the Tengu (Brute/Chaos Warrior). He was inspired by the Bard, which would give him a bonus in his first round of combat. 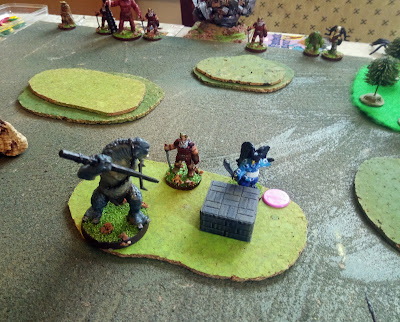 The Tengu leapt onto the plinth as I grabbed the initiative. I moved up other figures such that they were closer to enemy figures than the Tengu, so they couldn't shoot at or charge him. 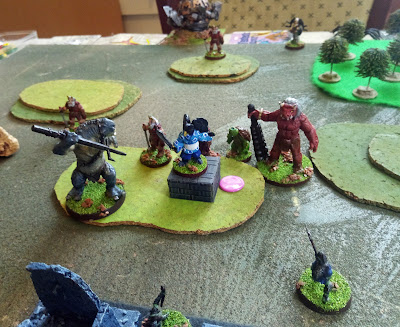 And that's how a lot of this scenario plays out; lots of shuffling to line up an attack on the warrior on the plinth. I chose low initiative cards for as long as possible, limiting the Goblin's ability to engage me. There was some skirmishing around the edge of the hill. 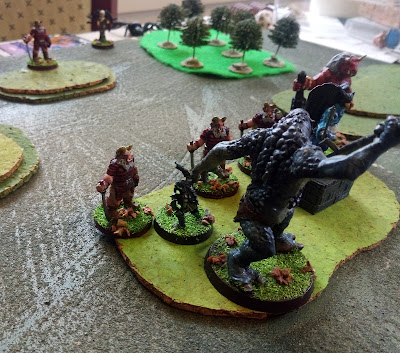 Much of my force was moving up in support now, whilst the goblins repositioned in response. 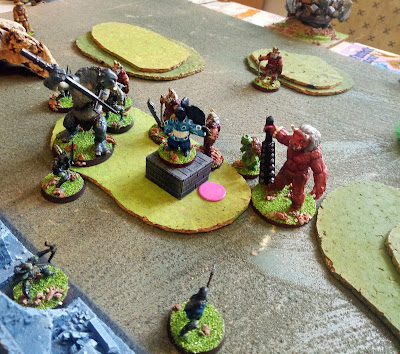 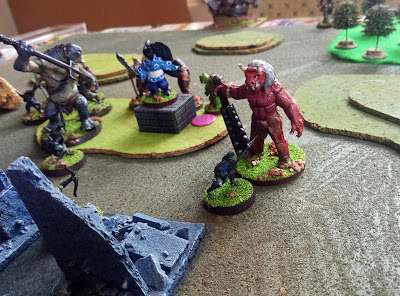 The Tengu still held the plinth unopposed as the troll was constantly distracted by other Yokai. But in fact casualties were mounting; the Yokai have a small warband, so the loss of a few figures is critical. 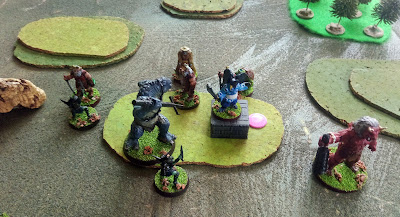 A goblin warrior attacked the plinth. Despite being seriously wounded ... 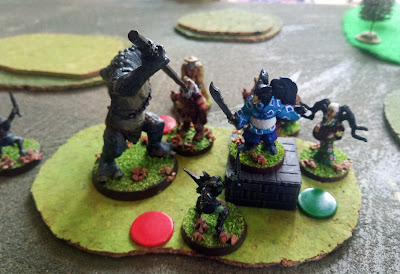 ... he slew the Tengu, and took the plinth. Now the Goblins had the upper-hand, and time was running out. 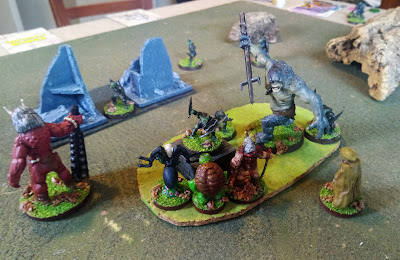 But the wounded goblin didn't last long. He was the only figure available to grab the plinth sadly (the troll was caught up in combat). A small oni killed him and took his place. 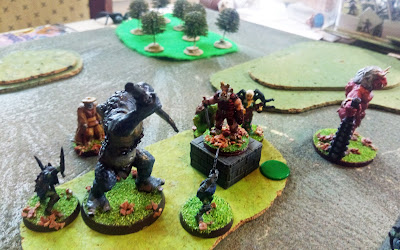 The goblins regrouped for one further attack. 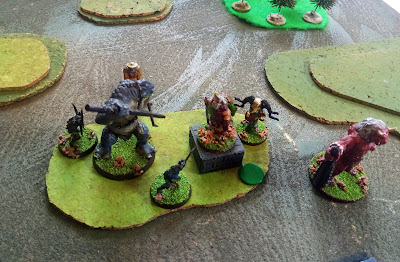 Inspired by the bard, who was also the warband's leader, the oni held off the goblin attacks. 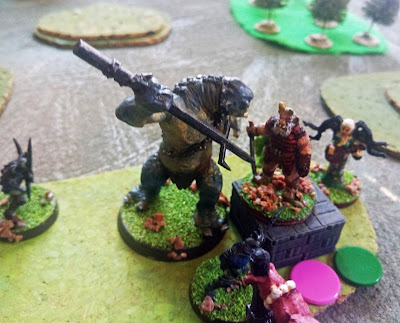 The rest of the Yokai provided support. The giant oni simply occupied a section of battlefield preventing archers from engaging the plinth because it was no longer the nearest target. One goblin archer went into close combat, but quickly died. 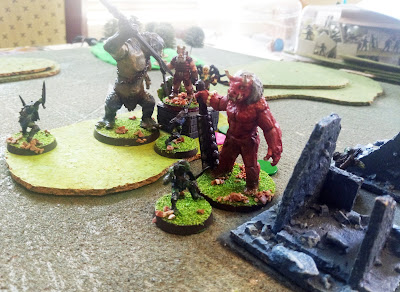 After 15 turns I held the plinth, although one more figure lost would have seen my warband's morale break. 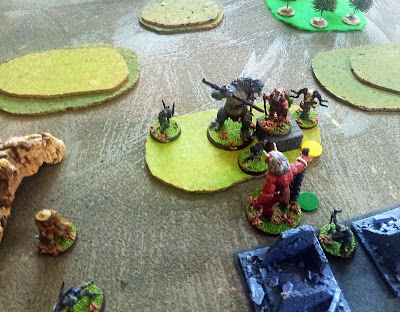 This is a very positional scenario. Once a side gets the plinth a lot of it is about preventing the other side from engaging the figure on it. In Battlesworn charges and shooting can generally only be done against the nearest enemy figure, so positioning figures closer to the opposition than the one on the plinth becomes key. I also spent as much of the early game as I could taking the initiative. With dice-based initiative you can do this forever, but with the limited card-play from COTGB you can only do it for so long.

The AI bidding system does a pretty good job. COTGB does have a simpler system for solo-play, but I'm not sure how to adapt the combat aspects of it yet.
Posted by Kaptain Kobold at 15:29