Caesar came over yesterday, bearing chocolate biscuits and looking for a game, so we played Battlesworn. He took an Uruk Hai force consisting of 4 x Fighters (including the Leader), 1 x Berserker/Brute, 3 x Arquebusiers and 3 x Tanks.

We played The Lever scenario from Challengers of the Great Beyond, although the eponymous device was a glowing pink crystal. I had to get a figure into contact with and then spend an action to attempt to activate it in order to win. Caesar had to stop me.

You can see us set up ready to play here. Caesar ponders his options with regard to the initiative cards; it was the first time he'd played with the card-based initiative system. 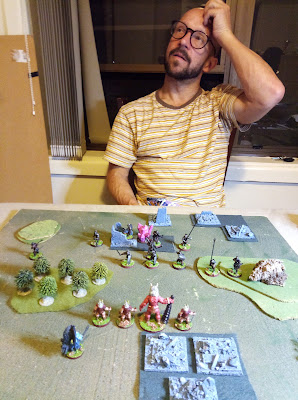 The heavy troops for each side faced off in the centre. Caesar had a strong front line of armoured troops, backed up by his crossbows. A few figures covered the flanks. I had my giant spider out of shot to the right, and the rogue protected by a fighter off to my left. 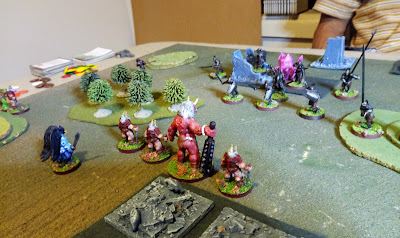 I brought the rogue and fighter out to sneak around to the crystal. Caesar reacted with his Uruk Hai Berserker. My Oni fighter wounded the fierce fanatic, who was so distracted that the kappa rogue ran him through, killing him instantly before he was able to strike a blow. 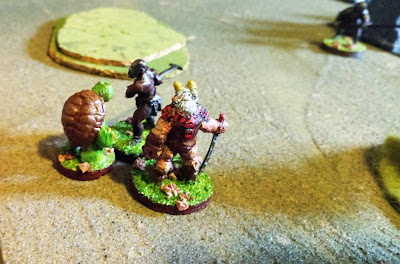 In the centre my fighters and the giant Oni engaged the Uruk Hai's armoured warriors. 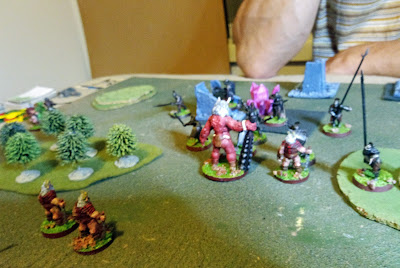 Caesar still had the crystal well covered. I could have dropped my Tengu (Brute/Flyer) straight onto it, but I still had to roll a 5+ to win, and would be under attack if I did, so decided to hold off until as many of the Uruk Hai as possible were distracted. Or dead. 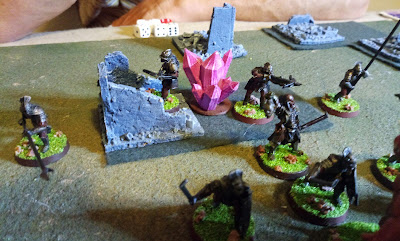 The giant spider fought an Uruk Hai warrior over on my right. The warrior would eventually kill the spider. The combat had no real effect on the game. 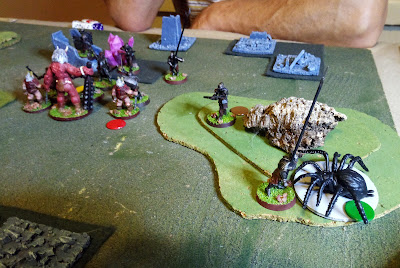 By carefully diverting the Uruk Hai with other troops I gave the Kappa a free run to the crystal. An Uruk Hai shot at the Japanese goblin as it closed in, but missed. 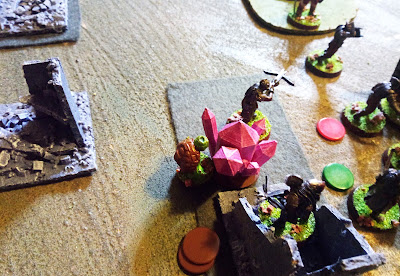 Careful bidding for initiative and some fierce fighting saw the Uruk Hai prevented from attacking the Kappa, who activated the crystal on its second attempt. 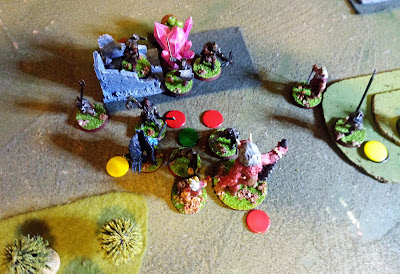 This was a fun scenario, which we completed in eight turns (the limit is ten). The Yokai had two good types for getting to the crystal - the rogue and flyer - but were outnumbered and prone to their force breaking after a few casualties. It was a game where careful use of the initiative cards paid off, and where the limits forced on the player came to the fore. Early on I used up my high-value cards, giving Caesar the initiative, but allowing my figures to intercept his attempts to charge my key figures as well as allowing the rogue unopposed reaction moves. Later in the game Caesar was left with high value cards, and was forced to react to my moves instead, but I had the rogue pretty much in place by that stage, and Caesar was unable to shoot or charge it without initiative. The card-based initiative really does reward careful planning far more than the original dice-based system where you can always bid the same range of numbers every turn.
Posted by Kaptain Kobold at 11:05