HOTT 52 - Week 6 - The Necromancer vs The Mother of Dragons

I still haven't got around to redoing the bases on my Undead army, but I enjoyed the last game I played with it so got it out again despite the dodgy look of a couple of the elements. I fielded a horde-heavy version - 1 x Magician General, 2 x Riders, 1 x Sneaker, 1 x Flyer, 11 x Hordes. 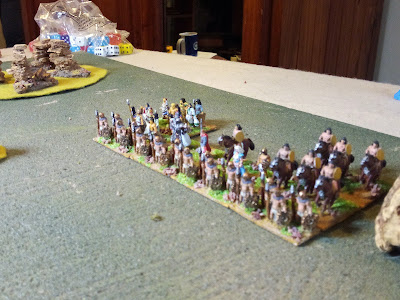 The terrain had a series of ravines along one flank (treated as woods). Both armies set up in the limited frontage of open ground available to them, but The Nercromancer put his cavalry in amongst the ravines, intending to send it on a flank attack. 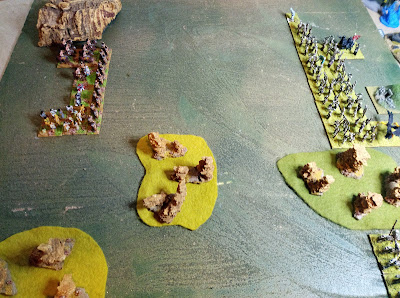 The dragons appeared on the first bound! 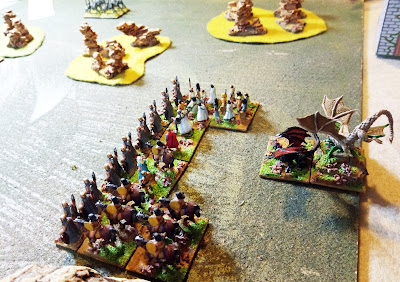 Daenerys quickly sent them into the attack. This is pretty risky with dragons in HOTT as they flee if they lose a combat, but dragons also instantly kill magicians in close combat, and The Nercomancer was exposed at the rear of his army. It was worth going for a quick win. 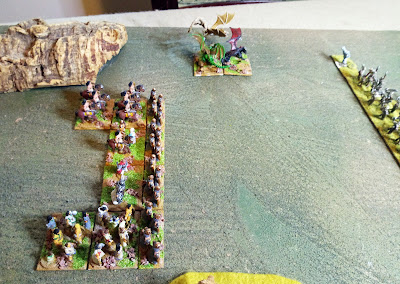 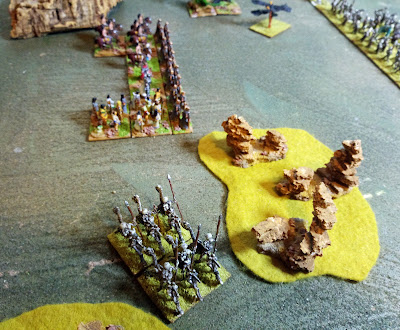 The Necomancer sent in his vultures to delay the dragons. 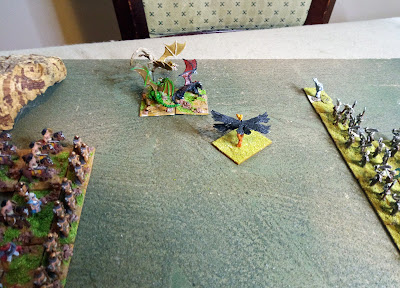 They 'delayed' them for precisely the one bound it took the dragons to destroy them. 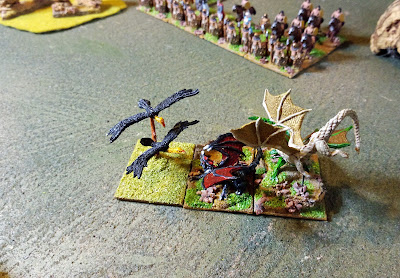 The Necromancer summoned dark magic against the dragons, but they flew on. 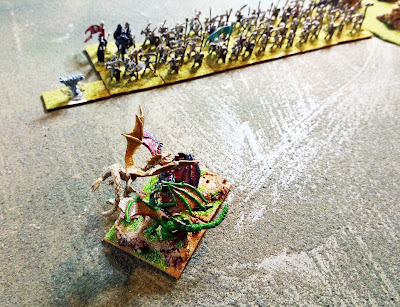 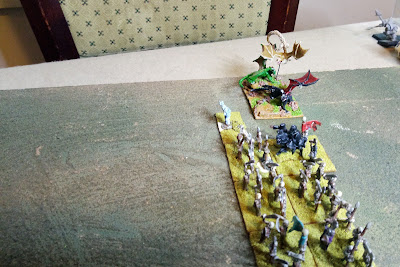 The skeletal cavalry hit the flank of Daenerys' army ... 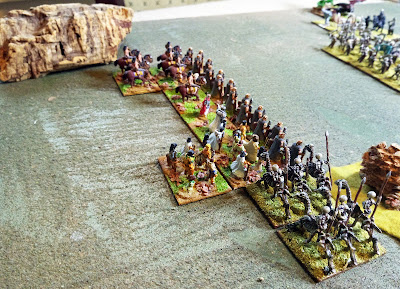 ... but her troops held firm, as she concentrated on her dragons. 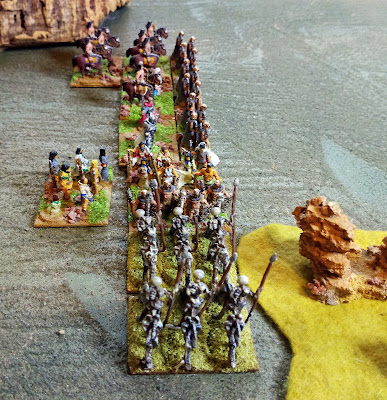 The Necromancer prepared for the attack, bringing up skeletal hordes in support. 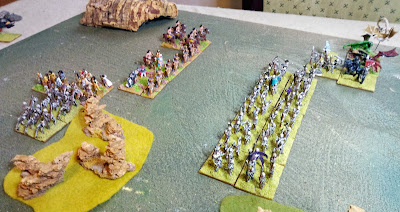 The dragons attacked! Was this the end for The Necromancer?

No. It wasn't. He won the combat, and the dragons fled. 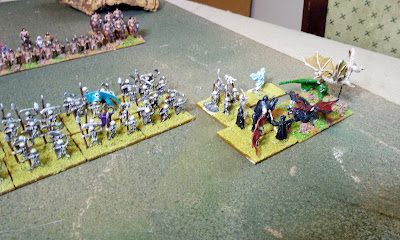 But his cavalry were suffering badly at the hands of a group of Unsullied. 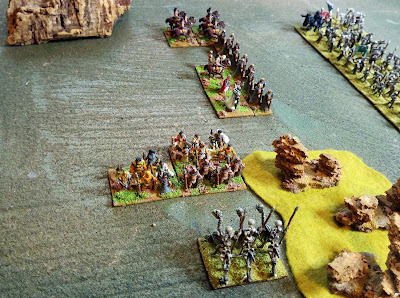 Daenerys advanced her army - the battle would now have to be won by her soldiers. The Necromancer cast more dark magic, and Ser Jorah and Ser Barristan were ensorcelled. Things were not looking good for The Mother of Dragons. 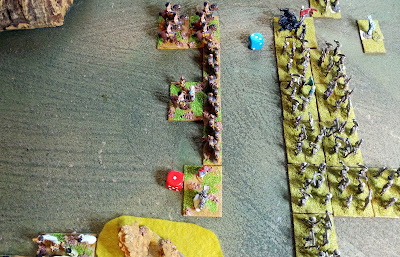 The Unsullied and Dothraki pressed home their attack. 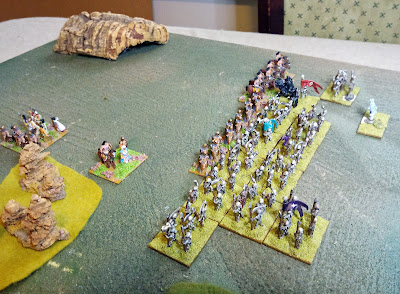 The results were mixed. The Unsullied destroyed some skeletal hordes ... 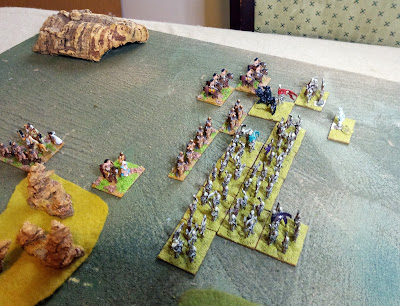 ... but a counter-attack by The Necromancer saw many Dothraki fall. 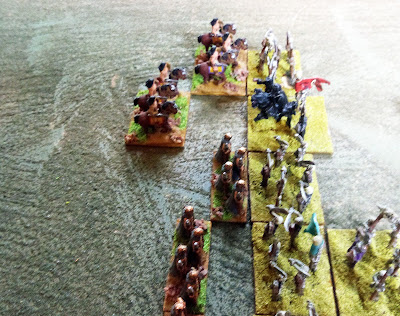 However The Necromancer was exposed. A group of Unsullied blocked his retreat as fierce Dothraki horsemen closed in from the front ... 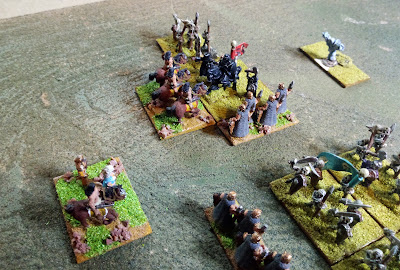 ... And The Necromancer fell! 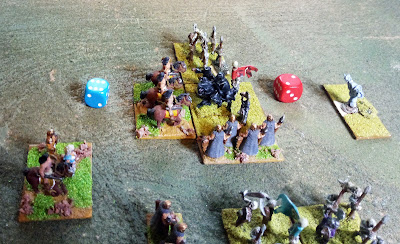 Daenerys had won - The Necromancer lost 12AP, including the general. Technically Daenerys lost 10AP, but in practice the hero element was immediately unensorcelled once The Nercomancer was destroyed, so in reality she lost 6AP. 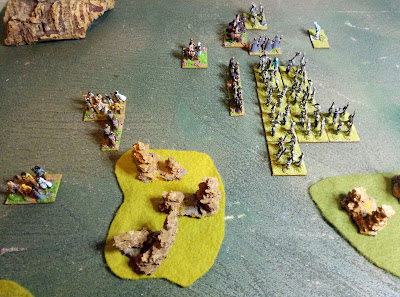 This was a wonderfully close game. The skeletal hordes were in a good position to begin overlapping the Unsullied at the end, and Daenerys' army was only a couple of AP from breaking. Had The Necromancer not fallen he could have still pulled off a win.
Posted by Kaptain Kobold at 12:38