It was a source of some surprise to me that despite my infamous online monniker, my wargames figure collection didn't include a single kobold, Kaptain or otherwise.

Last week I set about rectifying this egregious oversight and, seduced by a Facebook post advertsing new figures in the range, put in an order for some 28mm kobolds, which I spent a couple of evenings this week painting.

And here they are - enough kobolds for a varied BattleSworn warband:

These beautiful figures are made by Mike Broadbent for Goblin Factory, but are sold exclusively through Slave 2 Gaming. Drew, who runs Slave 2 Gaming, lives just around the corner from me, so I was able to message him my requirements on the Friday afternoon and pop round to pick them up on Saturday afternoon. I ought one of each available pack - four command figures, five sword-armed, five spear-armed, five axe-armed and five archers; a total of 24 figures. The warband uses 16 of them; the others will be used to fill in gaps in the roster as I discover its flaws in actual play.*

So what does the warband consist of?

Well, obviously the are led by a Kaptain Kobold. In BattleSworn he will simply be a Fighter with the Leader trait (I have been trying a change where every warband gets a Leader for free, rather than it taking up a slot). I wanted the kobolds to be numerous but puny, so making even their leader just a fighter seemed only fair. 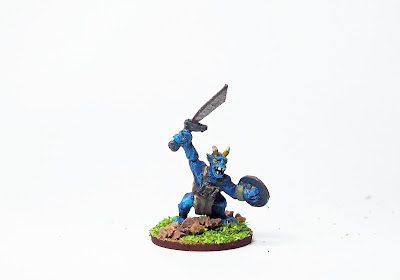 He is supported by his axe-wieding bodyguard - three more Fighters. 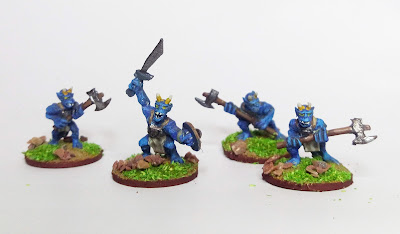 There are missile troops; two archers and two kobolds with javelins. In BattleSworn these could be Shooters, although Shooter/Rogues would be OK as well. The javelin-throwers could just be Rogues.

The group needs some shock-troops, and I assigned the role to thse two with axe and shield. In a boring warband they would be the obligatory Brutes, but I feel that the unpredictable Chaos Warrior trait fits them better, making them more unpredictable than the Fighters without any real increase in fighting strength or defensive capability. 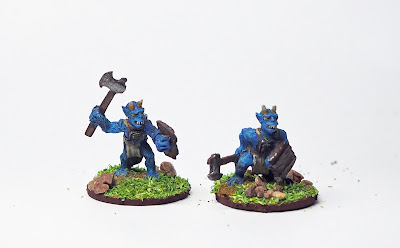 And the bulk of the warband? Six Rabble, armed with swords or spear. Cheap expendable filler.

So that's an easy 13 slots even without any multi-classing, which I'd almost certainly do for the missile troops.

As I say, there are a number of other figures waiting to be painted once I decide what to do with them. Some of them may undergo conversions before I finish with them. There's a nice drummer, though, which I think I may run as an inspiring Bard.

I find painting a real chore these days, and don't do a lot of it, but these figures were a pleasure to paint, with just enough detail to look good, but not so much that it got fiddly and boring.

And how big are these kobolds? Well, here they are closing in ond a GW Middle earth elf. 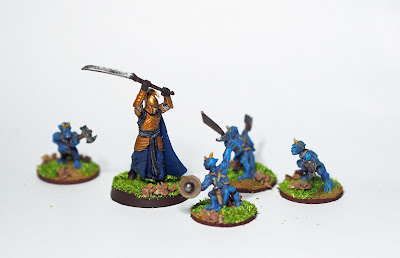 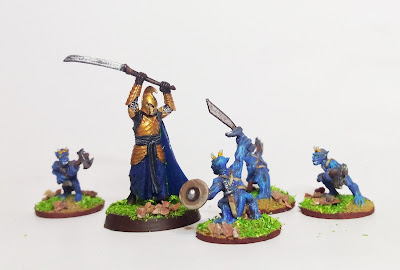 Small and puny. But numerous. 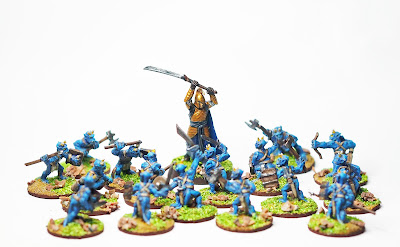 I'm hoping to get a chance to debut them this weekend ...

*And I'm assured that there will be more figures added to the range - flying and armoured kobolds even - later on.