I tested another Battlesworn scenario yesterday, lifted from 'Challengers of the Great Beyond', but using the fantasy rules. It was still a useful test of the setup.

I took the Dwarves (1 x Warmage/Leader, 1 x Brute/Berserker, 3 x Tanks, 2 x Shooters and 4 x Fighters) and pitted them against some NPC Elves (1 x Brute/Leader, 4 x Fighters, 4 x Shooters, 1 x Flyer/Healer). The scenario involves uncovering clues leading to the discovery of an artifact, which then has to be carried off the board. Each player has two clues in their half of the board. You move figures over the clues to resolve them; the third clue you move over gives you the artifact. Ideally you should hit the two on your half of the board fairly easily, and then have to do one on the opposing side. The optimum strategy is to do one on your side, the next on the opponent's side and then the third, artifact-revealing one, on your own side in order to improve your odds of getting it off the board.

This was the setup; both sides had figures covering the clues, plus forces assigned for rushing a clue in the enemy half of the board. 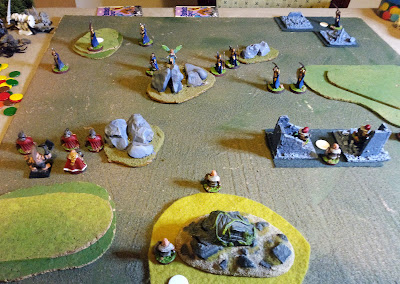 The game started with my Berserker going on a wild charge against an Elven archer. I cast a Protection spell with my Warmage, but it didn't prevent the Berserker being badly wounded by an arrow on the way in. The Berserker then lost the initiative in the melee and was killed by the archer. Not a good start. 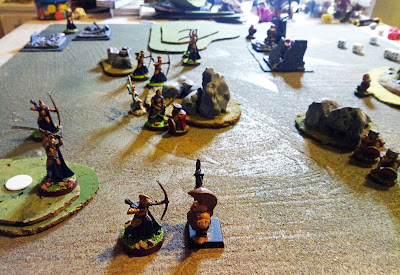 I threw the rest of my decent troops into combat, in order to clear the way to uncovering the clue on the hill. On of my Tanks took out the Elven leader, despite them having a Healer in support. 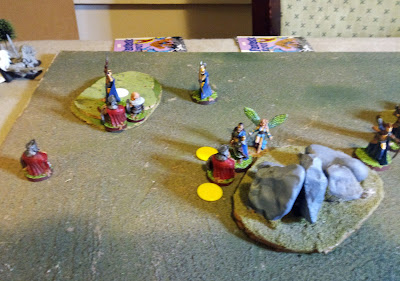 But the Healer was also a Flyer. She was able to move around the board unopposed, since my shooting troops had other enemy closer to them than she was in her moves - bad positioning on my part it's true, but a probable flaw in the scenario. 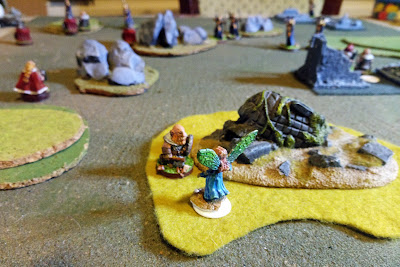 The Flyer flitted back and forth, uncovered the third clue and then flew it off the board. 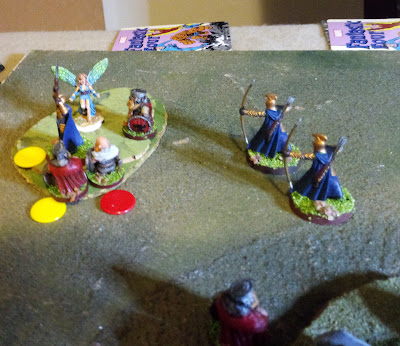 So a short scenario - it was over in four or five turns. I've fed back the information to Victor and we're discussing how to Flyer-proof it. In Battlesworn the King of the Hill scenario simply forbids Flyers, but I feel that's a harsh approach to such things. We have some idea though, and I'll see how they pan out.

The Flyer is a D&D Sylph figure I picked up on a bring and buy back in the UK about 20 years ago and which I'd never used to anything until now. See? You should keep everything, just in case ...