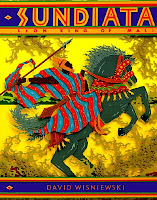 The Epic of Sundjata is a West African tale that tells the story of the rise to power of Mali's greatest king, Sundjata. Sundjata was an historical figure, born in about 1210AD. According to the legend, he was the son of a second wife of the Malian king Maghan, and it was prophesied that he would become Mali's greatest king. However, when Maghan died, his first wife Sassouma saw to it that her son, Dankaram, was made king, rather than Sundjata, and eventually Sundjata was exiled along with his mother and brother. Sundjata grew to manhood whilst in exile, and learned that Dankaram has been usurped by a powerful magician, the king of the Sosso, Sumangaru. Gathering an army, Sundjata went to war with Sumangaru, eventually defeating him at the Battle of Kirina in 1235AD. Taking his rightful place on the throne, he became Mali's greatest king, and forged an empire that was to last for another two hundred years.

These lists cover the two opposing forces at the Battle of Kirina, the climax of the Epic of Sundjata. The basis for both armies is the DBA Western Sudanese (1000AD-1591AD) list. Some useful historical background for this, compiled by Eric Lindberg, can be found on the DBA Resource Page at http://www.fanaticus.org/DBA/armies/III68/index.html


My main source for these lists is the book 'Sundiata - An Epic of Old Mali', by D.T. Niane and published by Longman. Yes, you'll notice that there are different spellings of the hero's name. That's what happens when you translate from one language to another

Sundjata is a mighty enough warrior to rate as a Hero. His brother, Manding Bory, commanded the Wagadou cavalry. A griot is a combination of bard, oral historian and advisor - every king had his own griot. He should be depicted playing a balafon (a form of xylophone), and his skill with this instrument placated the sorceror Sumagaru in a face-to-face encounter, hence the Cleric rating. Sundjata's sister, Nana, tricked Sumagaru into revealing the source of his strength, allowing Sundjata to drain him of his powers. Spearmen could be classed as Warband but of the two groups described in the epic, one is stated as forming a 'thick hedge' and the other as having 'longs spears' and 'menacing pikes', which sounds more like Spears.

Sofas are the rank and file soldiers. They are classed as Hordes because Sundjata seems to have been outnumbered in all of his battles and at one the opposing disposition was described as a 'valley, black with men'. Archers and horsemen are included to give the army a basis in its historical prototype; only the horsemen are mentioned in the main source I have used. Poisonous snakes filled Sumangaru's chambers.

Both leaders used owls to transmit messages to each other, so these could be added to their elements.