The Battle Of Badr 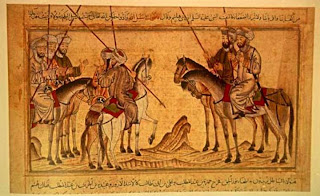 In 624AD, the nascent Moslem community, under Mohammed, was surviving by raiding caravans bound for Mecca. Word was received that a large caravan was bound for Mecca from Damascas, and 314 volunteers set out to intercept it. The Meccans got wind of this, and raised a force of some 800 warriors to meet the caravan and escort it to Mecca. Although they linked up with the caravan near Badr, they learned that the Moslem force was nearby, and on the prompting of one Hasham decided to attack them rather than continue to escort the caravan.

The Meccans had a force of cavalry and camelry under Hasham. The outnumbered Moslems were mostly infantry, but had a reserve consisting of several thousand angels led by the Angel Gabriel. These were invisible to all but Mohammed himself.

Both sides sent forward champions, a skirmish in which the Moslems were the victors. The Meccans then attacked en masse, but Hasham was killed and their army routed. The Moslem account of the battle claims that as the Meccans attacked, Mohammed came out of his trance and threw a handful of sand in the direction of the enemy. On this signal, the host of angels attacked and routed the Meccans.

You can read more about the Battle of Badr  at Wikipedia, of course.

This offers the following lists:

Notes
For the purposes of this scenario the angelic hosts are best shown as visible to both sides, although it would be cheaper to field them invisible.

Terrain
To the west should be a series of sand dunes (treat as steep hills). To the north should be some gentle hills.

Mohammed and the Angels should be placed to the rear of this line. The champions for both sides should be placed in the exact centre of the field, and start the battle in combat. As Mohammed was in a trance, the Moslems surrender the initiative to the Meccans, who take first bound. In addition, although they roll PIPs as normal, all Moslem elements count as out of command until they get a PIP roll of '6' (at which point Mohammed comes out of his trance).

Victory is determined in the usual way.