A Scenario For Liberated HOTT

This scenario is designed to be played with Liberated HOTT, my HOTT variant for fighting battles of the South American Wars of Liberation. It is not a balanced scenario; the Royalists have a definite advantage. But it can be played quickly enough that the players should be able to swap sides and try it again; see if you can do better than your opponent.

The map and OOB were adapted from those in John Fletcher's 'Liberators! Volume 1: The War In The South'. I cannot stress what a marvellous source of information this book, and its supplement, are for wargamers wishing to play this fascinating series of conflicts.

The Battle of Huaqui was fought on June 20th 1811 on the shores of Lake Titicaca in what is now Bolivia, but was then the province of Upper Peru. A Patriot army of about 5,000 men organised by the Buenos Aires junta under General Antonio Balcarce was surprised by a larger Royalist army under Brigadier General Manuel Goyenche.

The battle is fought on a standard HOTT board 2400p square: 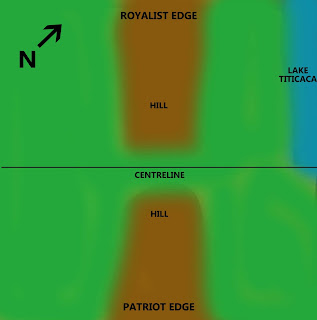 Lake Titicaca extends 300p onto the board, and runs along 600p of the edge. It is impassable.

The hills run along the centre of the table from the north-west edge to the south east edge, and are 600p wide. There is a single 200p wide gap between them exactly halfway across the table. the hills are bad going, and an element on them cannot see, or be seen by, an element on lower ground unless it is right on the edge.

The rest of the battlefield is flat good going.

Both armies deploy anywhere within 600p of their board edge. The Patriots deploy first.

West of the hill:

East of the hill:

West of the hill:

East of the hill:

An army is defeated if it either loses its general or if it loses half of its AP, and it has lost more AP than the enemy.

The Royalists advanced across the hills to seize the pass, and the Patriot left attempted to intercept them. They didn't make it, and the Royalist centre and left combined to rout the Patriot right. They then turned through the pass and attacked the Patriot left, supported by their right wing. The Patriots fled the field, and only 800 of their 5,000 troops survived the battle.

I played this through twice in just under two hours, and the Royalists won both games. In both the Patriots were able to block the Royalists' advance into the pass, but this distracted them from vigorous attacks elsewhere. The Patriots have it tough, with their best troops pretty much out of command at the start of the game, whereas the free deployment of the Royalist general allows them to choose where they want to attack.