A few days ago there was a brief discussion on a Facebook post I was following about people having 'personal figures'. That is, people who have an actual miniature of themselves.

Yesterday, when sorting out the armies for my next HOTT52 game, I found mine!

It was sculpted by Sebastian Rogers back in 2004 for the Berkeley HOTT competition that year. Only four figures were cast. Three were painted gold-, silver- and bronze- and former the basis of the first, second and third-place trophies. The original green was used for the last-place trophy. And one figure was left unpainted, and given to me, along with the mold. So as you can see, this is a strictly limited edition miniature.

And here's the figure. Obviously I painted it. I am depicted as the Godfather of HOTT,  wearing my comfy dressing-gown, holding a mug of cocoa and carrying a copy of the HOTT rules (the old v2.0 purple book as opposed to the more recent book with the black cover). 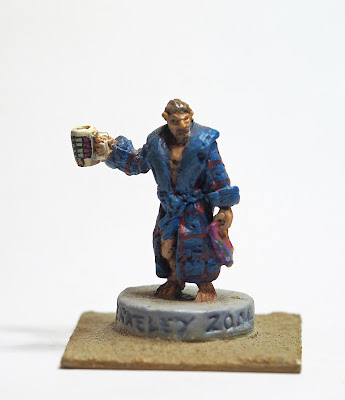 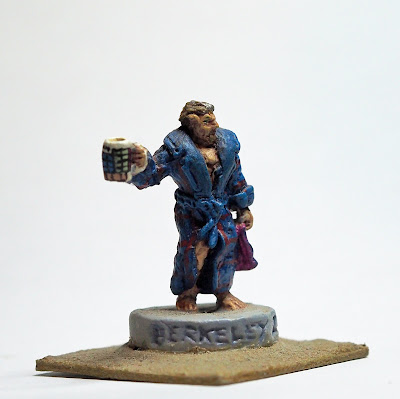 And those of you who have met me will realise that it is also a rather 'heroic' depiction of my physique. 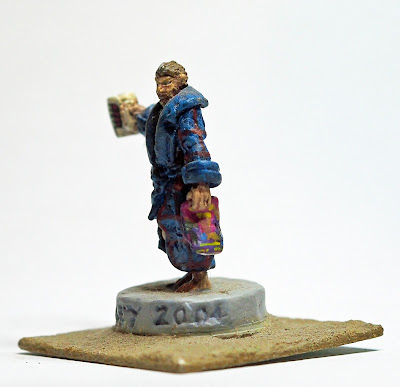 I no longer have the dressing-gown (although I still have one that's similar), and we gave up our evening cocoa a few years ago. But I still have my HOTT rules.

I can't remember who won the various trophies that year, so if any of you are reading this it would be great to know if you still have your Kaptain Kobold figure.

I do still have the mold, but have never used it.
Posted by Kaptain Kobold at 09:12