Challengers Of The Great Beyond

Victor came down to The Gong last night, and brought a new game he is currently developing, Challengers Of The Great Beyond (COTGB), which is a sci-fi version of the Battlesworn fantasy skirmish rules from Ganesha Games. It uses much the same core mechanisms in terms of bidding for initiative and resolution of combat, but has some fundamental differences as well. The biggest change is that as well as characters you can also purchase squads, which are basically multi-figure characters. Squads lose figures rather than move through the coloured wound statuses and there are a few other differences in the way they perform in combat.

All classes are either squads or characters, and each one comes with its own set of special rules. There is no 'basic type' like the Fighter in Battlesworn. Costs are more granular - rather than each type costing one 'slot', you get 16 slots to spend on your force, with squads and characters costing between 2 and 5 of those slots. You must spend at least half of your slots on squads. Squad types cover, but are not limited to, such things as Redshirts (numerous but very vulnerable in close-combat), Star Marines (basic competent combat infantry) and Starport Thugs (undisciplined but handy in a brawl). Characters can be such things as Space Rangers (think Flash Gordon or Dan Dare), Pirates (with a Han Solo variant called the Maverick that always gets to shoot first) and, of course, the obligatory Psi-Knights. Psychic powers are the equivalent of Battlesworn's spells, but are resolved slightly differently.

Anyway, we set up a straight fight, using 15mm figures selected from Victor's collection. He went for a force of competent Star Marines with four-figure squads, backed up by a heroic Space Ranger and a powerful Juggernaut. I opted for a force of Redhsirts (in six-figure squads), led by a Sergeant (which operates as a single-figure Star Marine in game terms) and supported by a hover-bike and a squad of Armoured Marines (upgraded Star Marines in quality armour and equipped with jetpacks).

The volcano in the centre was simply impassable terrain, but when we rolled for a battlefield complication (an optional rule) we got a random meteor shower, which we rationalised as the volcano actually erupting. You can see playing-cards on the table; COTGB uses a hand of cards for determining initiative rather than players bidding using dice. Basically each player gets a hand of cards consisting of two each of A,2,3,4,5 and 6 (12 cards in total). They choose two of these cards to dispose face-down. Each turn the player chooses one card from their hand face-down as their bid. Obviously you have to plan how you're going to play your cards; use all your low value ones early in the game, and then towards the end you will tend to lose the initiative. The hand of cards limits the game to ten turn, although Victor reckons that most games end in about 5-7 turns anyway. 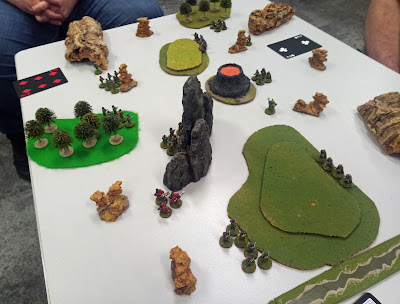 A squad in action, shooting at Victor's Juggernaut. 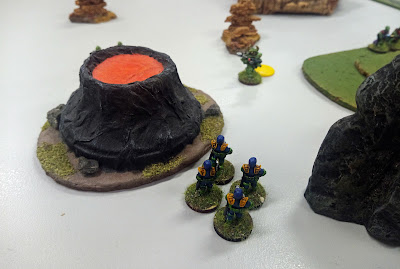 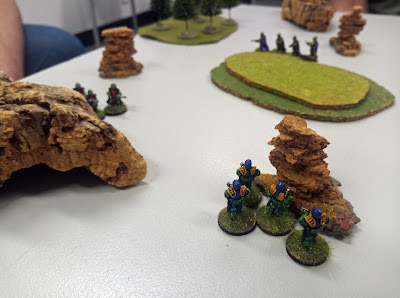 This squad of Armoured Marines only consists of three figures, but they are pretty dangerous. 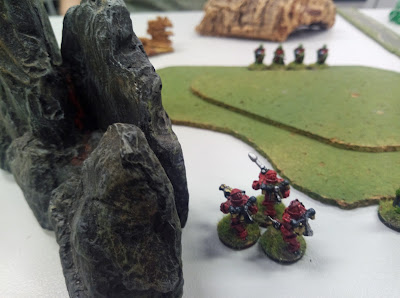 Redshirts are pretty dire in close combat. so Victor quickly got stuck in with pistols and bayonets. A lone Star Marine, the only survivor of his squad, fights my Sergeant. 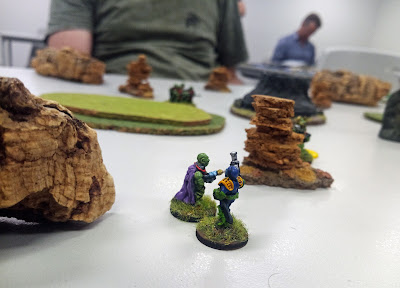 Victor's troops tore through my Redshirts, and my force broke in four or five turns. Really I needed to have set them up in cover where I could shoot down his troops before he could close, and also have made more use of my Sergeant's ability to give units a free 'follow me' type action.

There's still plenty of work to be done on COTGB, but the core mechanisms and concepts seem sound, and it certainly improves on Battlesworn in terms of 'crunch' whilst retaining the key interesting features of the system. Thank you to Victor for bringing it along for us to play.
Posted by Kaptain Kobold at 10:03