I adopted a lazy 'winner stays on' approach for this week's reported HOTT game, and selected another army that was in the games room as an opponent. Closest to hand were Arthur's Knights of the Round Table. With the Swiss infantry being mostly warband this was going to be a bad matchup for them (much as they get against most of their historical opponents in DBA). Fortunately they defended, which gave them chance to dump a pile of nasty terrain on the table; a couple of steep hills and a village, plus one gentle hill in case they got lucky and had the chance to defend it. Arthur got the approach he wanted though, sending his knights off on the right flank against the fast moving Swiss keils, and covering the centre himself with Lancelot, Merlin and his foot. 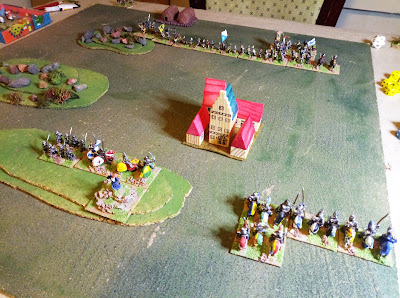 As defenders the Swiss deployed first, with their pikes in the centre, most of their faster infantry on their left and some foot deployed to sweep through the rocky hills and menace Arthur's left. 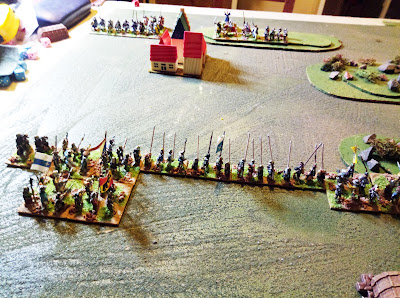 Opening moves. Camelot advanced on both sides of the village, whilst the Swiss pushed forward to try and stop Arthur's line from extending. 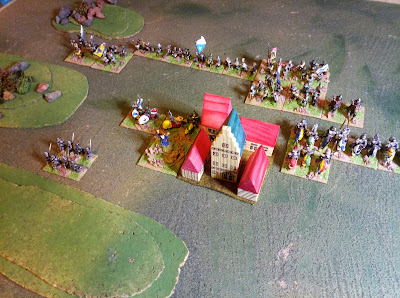 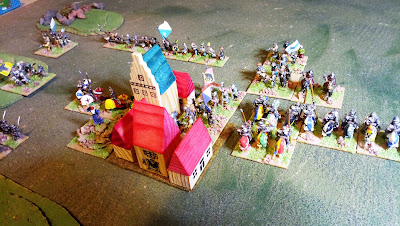 Merlin's magic caused some of the Swiss to fall back (you can see them retreating in the background) weakening their line ... 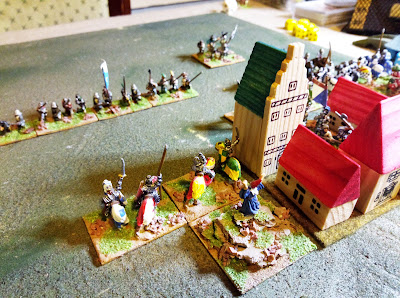 ... as the knights charged. The Swiss actually held them 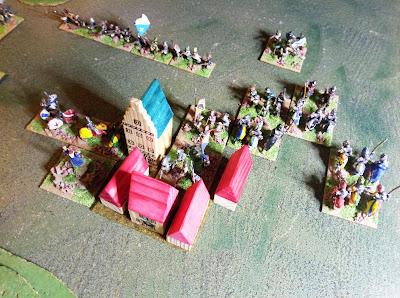 However a poor PIP roll didn't give them the counterstrike they needed and Camelot kept up the pressure, destroying the Swiss light cavalry and some of their infantry. Some Swiss still skulked in the village, but plent of their infantry was outside it and Camelot's finest were charging them again and again. 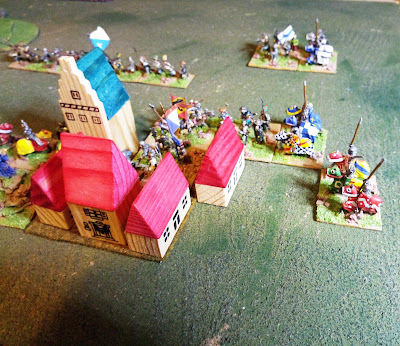 As his left flank collapsed the Swiss commander ordered the pikes forward, but once again his army wavered, and stood motionless as Arthur's men pressed their attack. 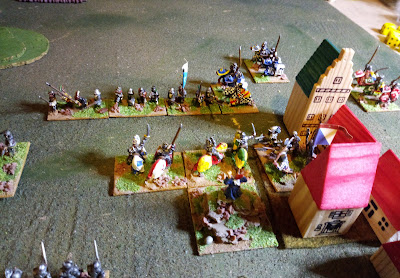 The Swiss in the village got their act together though, surging out to attack Lancelot and distract Merlin. Lancelot charged into the village smiting Swiss left, right and centre and driving them back. 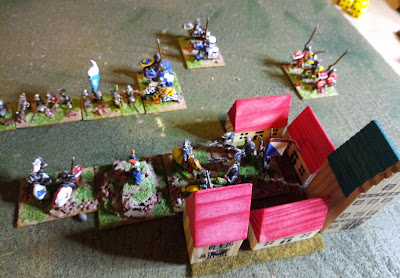 Meanwhile the remaining knights were charging the Swiss pikes, and soon had the commander under attack. He held off attack after attack, but there were no troops available to come to his aid. 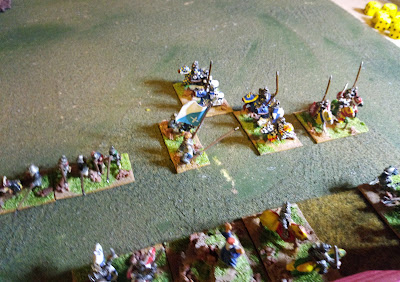 Eventually he was overwhelmed by a charge supported by Merlin. 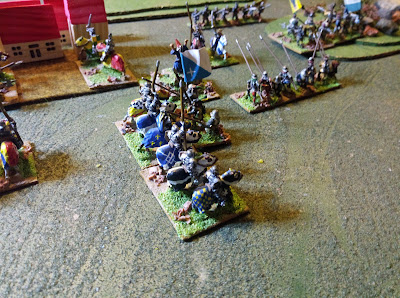 The Swiss lost this badly - they killed one element of Arthur's knights and lost 12AP of troops including their general. But to be fair an army bult around knights is their worst enemy.
Posted by Kaptain Kobold at 07:00