I first started writing the game which would be known as 'Spandau and Lewis' back in 2008. Ever since then it's been in what I've always described as a 'Draft' status, as I constantly tinkered with the mechanisms. Well, having had it back out on the table this week, I finally decided to stop messing around, tidy it up and call it a release.

You can find it here:

There's a lot missing that I was planning to include. I still have notes for attacking ground troops (and their shooting back), AA fire, balloons and bombing, as well as a few more oddities. But what's in that document should be enough to get you flying and shooting with the aircraft of your choice. The sample aircraft lists at the back represent those I have i my own collection, plus a few I've used in scenarios I've tried out. It should be easy enough to extrapolate your own designs, but I will post a more complete list one day, since I have a pile of aircraft stats derived from those in the old Aces High boardgame.


As a bonus, here's a link to a thread by an artist called Peter Hill, who seems to specialise in WW1 air-warfare paintings. There's some interesting pictures in it, including this one of Alphonse Pergoud, who features in my previous post. 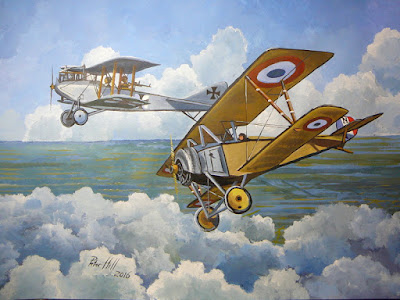 Enjoy!
Posted by Kaptain Kobold at 23:30