On my Six By Six Challenge list is 'Neil Thomas Pike and Shot'. When I drew up the list, I'd not long played the Pike and Shot rules from his 'Wargaming: An Introduction', and was keen to give them another try and explore how they played. And I probably still will. However the other day I was surprised to find that someone else was using the ECW rules I derived from his 'One Hour Wargames', and this inspired me to take the various notes and ideas I'd got for changes to them, and actually write everything up properly.

I did that during the week, and decided to try them out this afternoon. And, I thought, since I'm playing Pike and Shot, and the rules are nominally Neil Thomas, in style if not in content, it will count as one of my Six by Six games. Because it's my challenge, and I get to set the rules.

Here's some quiet English countryside, in 1643. I decided to do a scenario from One Hour Wargames, and got 'Bridgehead'. One side would start with a unit roughly in the centre of the board, whilst the rest of their force would trickle in from the right of the picture to cross the river and expand the bridgehead. The other side starts off table, and their six units appear in three groups of two over the first few turns, with their entry point being randomised. 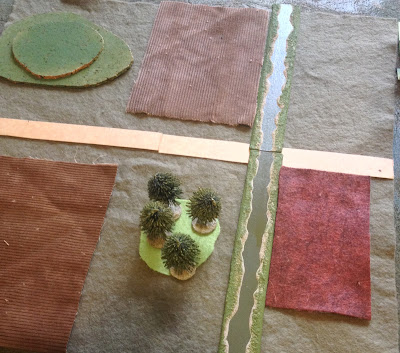 The Parliamentarians. Their force consisted of four infantry units, one of horse and one of artillery. I decided that each side could have one infantry unit upgraded to elite but one also had to be raw. One of the additions I have made to the rules is for pike and shot ratio; units default to being 'balanced', but might be pike- or shot- heavy, which gives them a bonus in close combat and shooting respectively, whilst penalising the other form of combat. I decided that Parliamentarian foot would either be balanced or shot-heavy and rolled for each infantry unit. The elite unit ended up balanced, whilst the others were all shot-heavy. 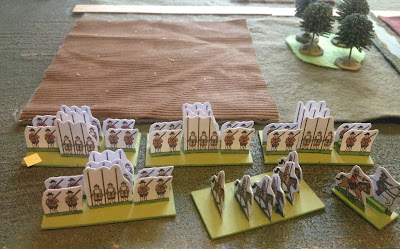 The Royalists. They had three foot, some dragoons, artillery and a unit of horse. Again, their elite unit ended up balanced, whilst the other two units were pike-heavy.

Both sides had a leader, who could rally off hits, change a unit's ammunition status or rally cavalry that had lost impetus. 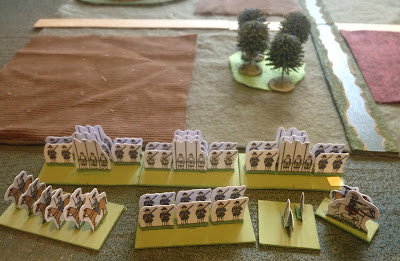 I randomly determined which units would appear when for both sides. The Parliamentarians had the bridgehead, and their elite infantry was it. 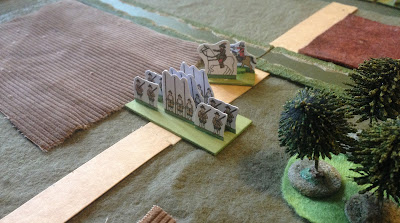 The first Royalist units appeared to the east. Coincidentally it was their elite foot as well, supported by some artillery. The artillery was sent up onto the hill to cover the ford, whilst the two foot units closed. 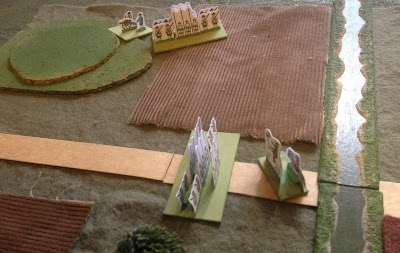 First blood to Parliament. Red markers indicate hits; a normal unit can take five hits, and elite six and a raw one four. 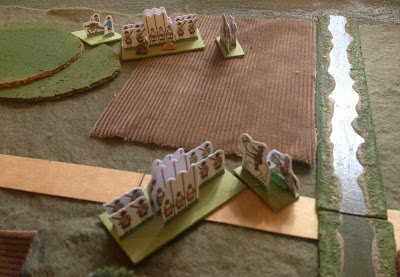 The first Parliamentarian reinforcements arrived; the artillery. Rather than have it cross the river into what would be the centre of the action, it was sent further up the bank to harass the Royalists as they deployed. 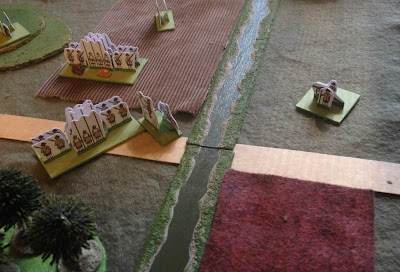 More Royalist reinforcements arrived, in the same place as the first batch. This group consisted of the raw foot and some dragoons. The dragoons moved to screen the rest of the infantry from the Parliamentarian artillery. 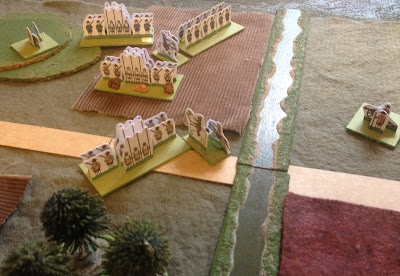 Finally the Parliamentarians got some reinforcements, in the form of their raw foot. They rushed down the road to the ford 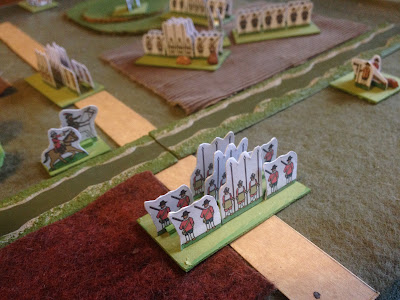 Outnumbered at the bridgehead, the Parliamentarians were fighting hard. 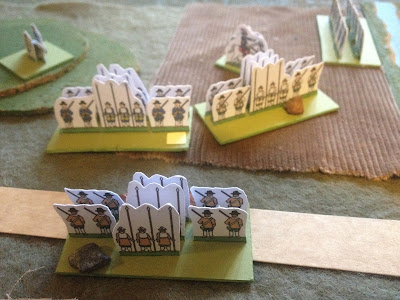 But the Royalists were massing. Ther third batch of reinforcements - the horse and the final foot unit - would enter from the same point. 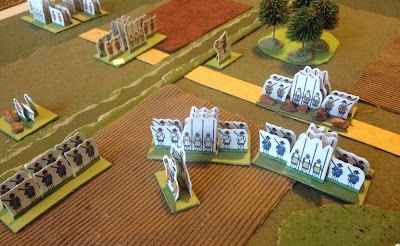 Parliament now had two foot units across the river, and some horse moved up in support. But the defenders of the bridgehead were too close to the ford for any other units to cross and assist them. 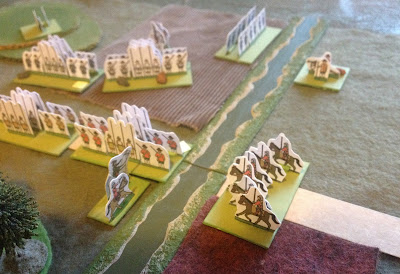 Under these rules, units which shoot can run out of ammunition. In addition, those units cannot enter close combat unless they have run out of ammunition. So foot will trade fire for a while, before sending in the pikes. I allow leaders to change a unit's status, so a player can manage their foot's ability to charge or fire to a small degree. In this case both Royalist foot had run out of ammunition. Their leader failed to replenish it, so there was no choice but to charge into combat. In fact this was no bad thing; units remain locked in combat until one is destroyed, so whilst the melees were ongoing, the Parliamentarian couldn't move their units away from the ford in order to bring up reinforcements. 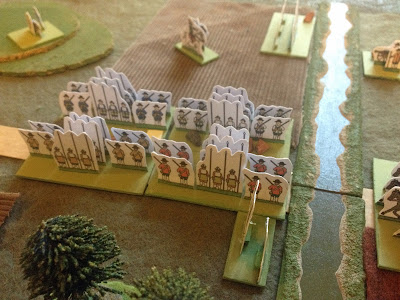 In the current iteration of the rules I only allow a one to one melee engagement, so the Parliamentarian horse couldn't cross the ford to support their infantry on the other side. This is something I'll probably change (the original rules allow one contact per face, which will work with a few adjustments to the combat rules). The elite Parliamentarian foot had now broken, but the Royalists which defeated them also couldn't turn onto the flank of the other Parliamentarian foot unit because of the one on one melee rule. 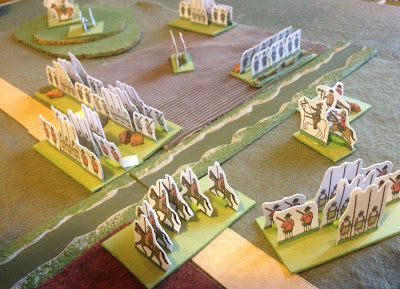 The Parliamentarians now had all of their foot up, and they lined the river-bank, to take the Royalist reserves under fire. The Royalists returned the favour. The dragoons had eliminated the Parliamentarian guns, but had taken hits themselves. 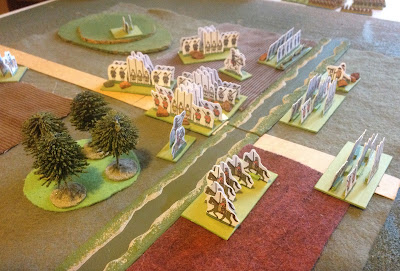 A firefight across the river. 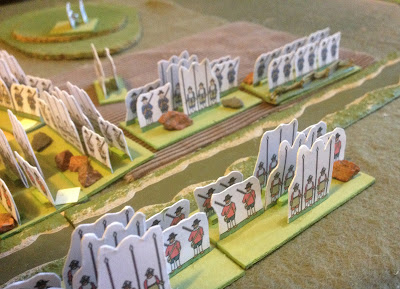 The raw Parliamentarian foot was holding firm, but so were their opponents. And with both leaders rallying off hits, it would be a long fight. The ability of leaders to do this is something I need to review. 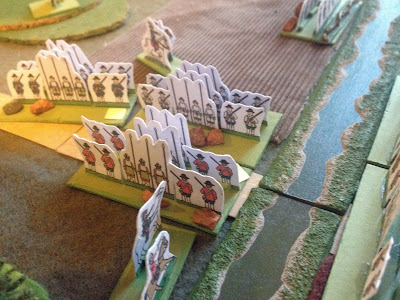 With the game into the last few turns, the Parliamentarian infantry broke. They now had nothing north of the river. 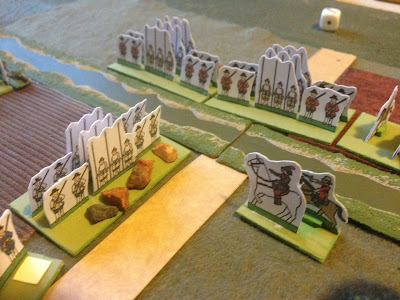 Their foot to the south kept firing, until the one at the ford was encouraged to charge. 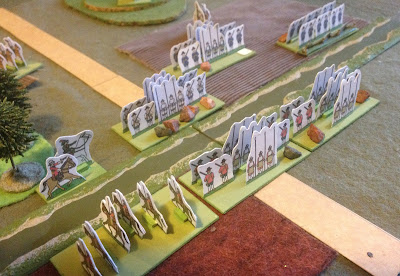 In it went, with the horse moving into position behind it to carry on the fight if it broke. 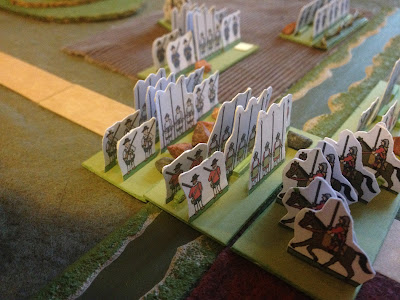 A shoving match ensued, but the Royalists held firm. Again, the ability of a leader to rally off hits was key. 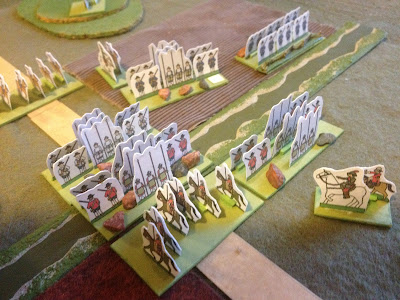 The Parliamentarian foot couldn't force a crossing and broke. The only hope they had now was to force a draw by getting their horse into the bridgehead. This would require them to score plenty of hits, and for their opponent not to save any. 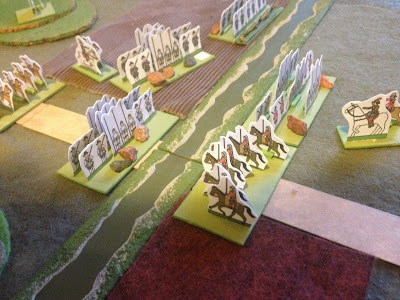 They charged, and scored two hits. But they needed three. The Royalists held the ford and won the day. Once again the attackers failed to open up the bridgehead, which I have regularly found to be the key to them winning this one. You have to take the fight away from the ford, if only to allow your reinforcements room to cross. 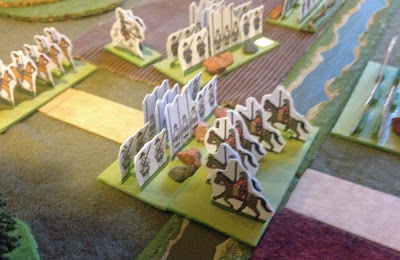 Although not dominating, the pike and shot ratios had a small effect, with the pike-heavy Royalist foot using it to score a winning series of hits in one melee, and the Parliamentarians using their shot advantage to gain an edge in the firefight over the river. As I wrote above, I'm not entirely sure about the ability of a leader to rally off hits. Neil Thomas games tend to be attritional, and I somehow feel that eliminating hits is against the spirit of them. Many of the One Hour Wargames scenarios tend to assume that units will be destroyed within a certain time-frame as well, and rallying makes this harder to achieve. I'm inclined to allow leaders to prevent hits on a unit, rather than take off ones already there. But I need to work out a mechanism I'm happy with.

The current version of the ECW rules can be found as a link on my Free Stuff page. At the time of writing, though, they aren't the version I used here.