We had a DBA night at the Gong Garage Gamers last night. On one board I provided four of my early dark Ages armies; all dating from 420ADish were Sub-Roman British (with a dash of Roman), Picts, Scots-Irish and Early Saxon. The four armies are mutual opponents, so any combination was possible.

In the first game I took the Scots-Irish (a mix of auxilia and light chariots) whilst Geoff took the Sub-Roman British (cavalry and spears). He defended and we ended up with an open battlefield; a few fields a hill and some woods. The Irish chariots formed up on one flank. 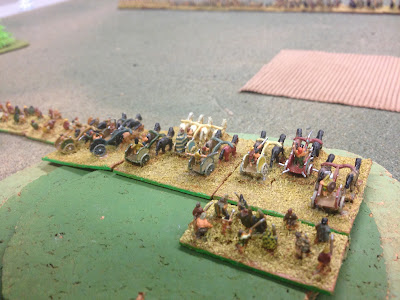 The British cavalry formed up opposite them. 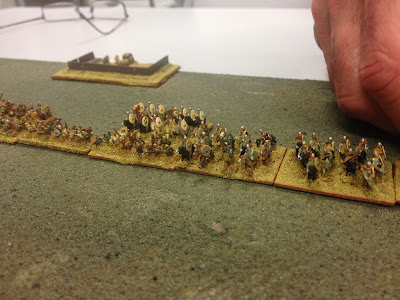 Irish psiloi covered the woods on their other flank; British blades and psiloi opposed them. 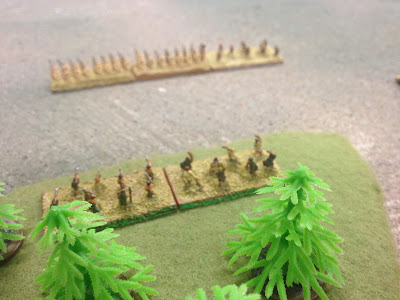 The initial fight between the cavalry and chariots went the way of the Irish, but they were unable to exploit their advantage. 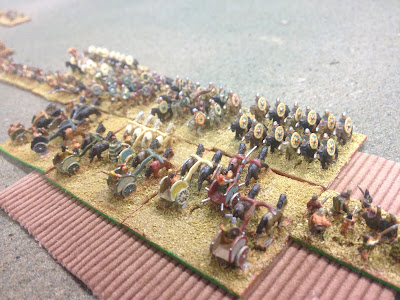 On the other flank the British attacked ... 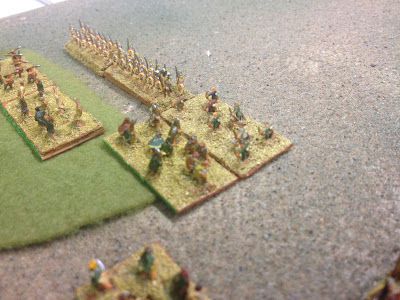 ... then outflanked the Irish in the woods. 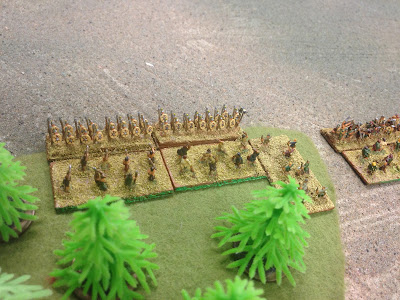 The stalled cavalry fight gave the British foot time to come up, catching their lighter Irish opponents in the open. 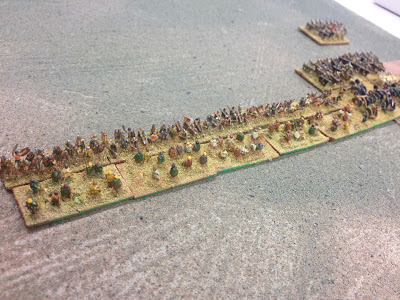 Despite another push by the Irish chariots, the Irish foot were massacred by the British spears. I think Geoff won this one 6-1. 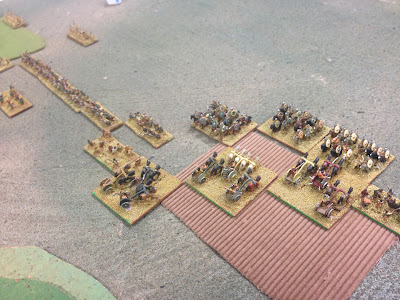 On the other board Gary had brought some 15mm armies, but I think all of the games played on it were between an Early German and an Ancient British pair. 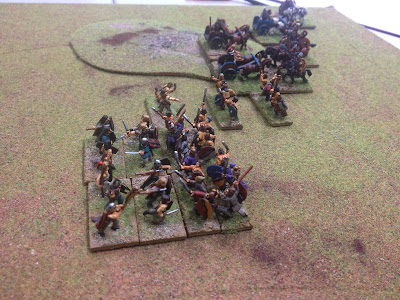 I switched to this board after my first game; Daniel took the British whilst I took the Germans in what was a matchup between fast warband and solid warband.

I strung my army out in a line to oppose the British advance. 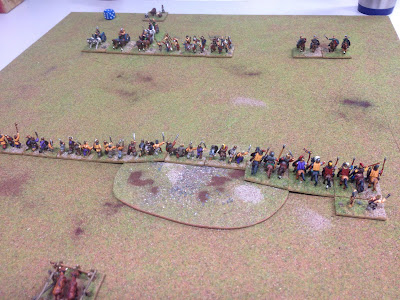 My cavalry advanced on the British light horse on their left, but, as in the previous game, the attack stalled as the focus of the battle shifted elsewhere. 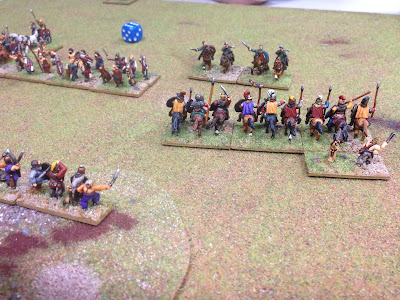 Daniel's chariots attacked my main line. He had some appalling combat rolls, however, and the warband held, with the solid ability of the warband driving off chariots more than once. His warband attacked in the centre, but the hill gave me the bonus I needed to hold the attack, then drive them back. 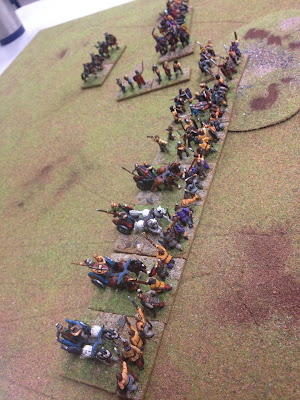 British warband fell in the centre, and I finished the army off by finally surrounding and destroying their light horse as well.

This was a fun game, with some interesting positional play around the join between my cavalry and infantry early on. Daniel failed to turn a slight advantage there into a kill, and bad combat scores dogged him through the rest of the battle, allowing me to take the initiative and pick up the win. 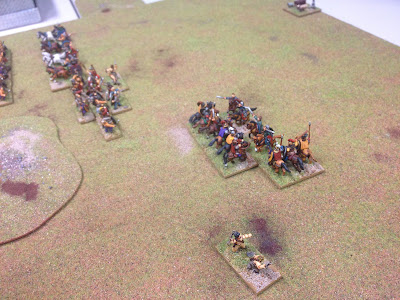 On the other board Geoff used the Sub-Roman British again, whilst Caesar tried the Picts with their fast pikes. Once again, an open battlefield favoured the British. 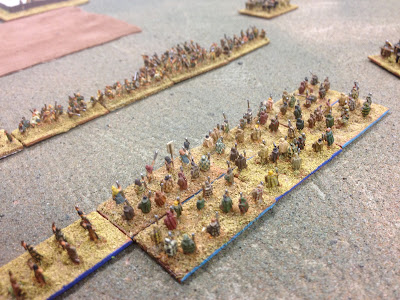 Caesar put up a valiant fight, but the British secured another win. 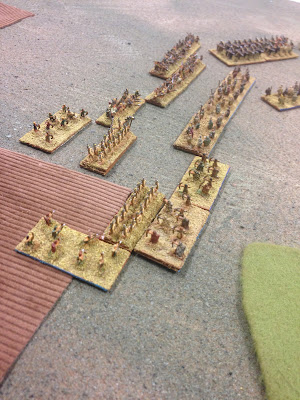 In my final game I took the Picts against Gary, who used the Scots-Irish. This meant a game between two armies whose home terrain was Littoral, meaning that we automatically had a waterway in play and that both armies could hold back 2-3 elements as a sea-borne landing force on their first bound. 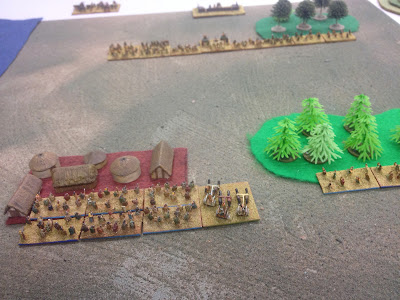 My raiders were the Pictish horse, who immediately swamped the end of the Irish line. However they failed to kill the auxilia there. 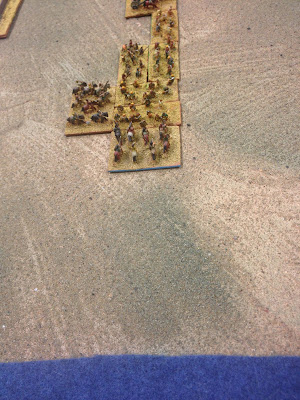 The Irish response was a landing by chariots. 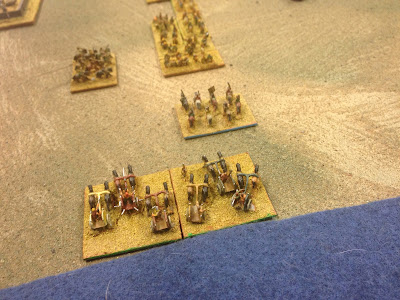 The Pictish horse, now isolated from its own army, were overwhelmed and destroyed. 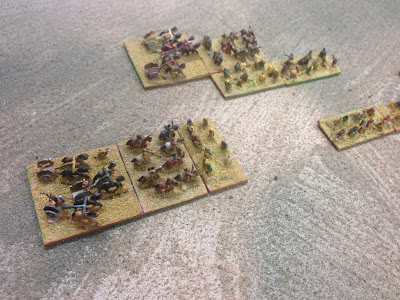 Gary was two kills up on me, but his army was fragmented. I pushed the rest of the Picts forward, and one lot of chariots was caught and destroyed. But the battle soon settled into a linear fight, anchored on the waterway. The Pictish pikes proved their worth against the Irish auxilia, with a double-ranked pair proving especially deadly. 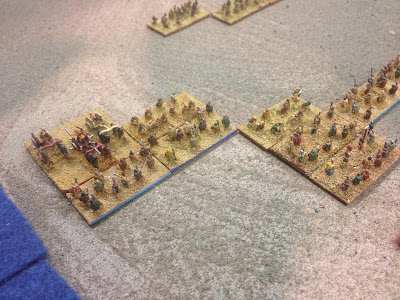 However, at their moment of victory, with four Irish elements now destroyed, the Pictish general fell to some Irish infantry, leaving the game tied as we went into Gary's bound. He killed some psiloi on my right flank to pick up the win. 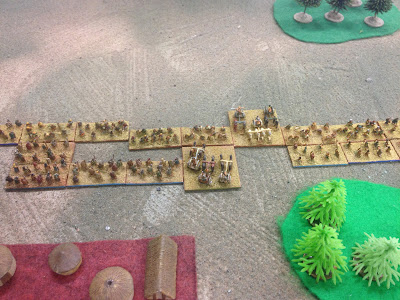 I had three interesting, close games of DBA, and it was fun to try littoral landings for the first time as well. We didn't have too many issues with the rules either which, given that we don't play these kinds of games enough to really get familiar with them is a good thing.

I'm going wild, and will be treating this session as one game for my Six by Six challenge.