On and off I've been rejigging my 6mm DBA/HOTT armies for DBA 3.0. Inspired by Thursday evening's games with my Sub-Roman British and their foes, I finished off the few odds and ends that needed doing to my Early Imperial Romans and Parthians, and then gave them an outing.

I don't have all of the options for either army, but have a few. I played two games, using the same armies for both, though.

The Romans defended in the first game. They placed a waterway to close down one flank, and chose some ruins in order to limit the Parthian movements further. The gentle hill was a mistake; since the Parthians could choose which side they enter from, they can pretty much deny it to the Romans. The Romans also chose a wood, but it was discarded after it couldn't be placed legally.

The deployment left the Romans (left) in the open. Not good. 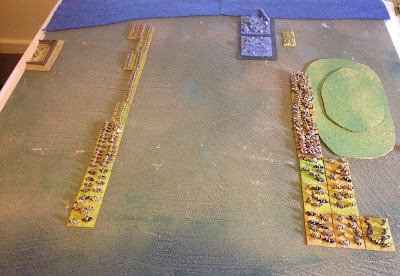 Parthian cataphracts. On their left the horse-archers were doubled up for extra combat strength. With the open battlefield, the Parthian plan was a headlong assault on the Roman centre and right, trusting on its force to destroy them before they could exploit the fact that there wasn't Parthian right. 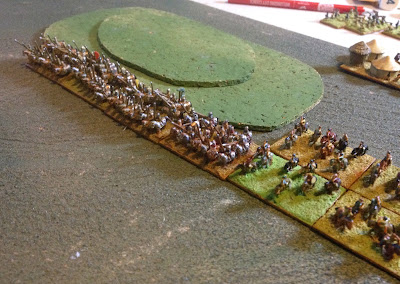 The Romans had massed all of their mounted on their right, supported by their archers. 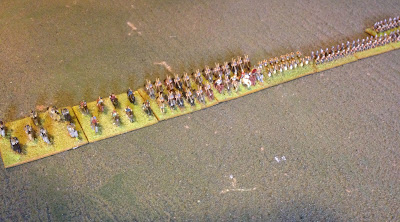 The Parthians advanced and, taking a gamble, the Roman legions moved to meet them. This was a risk, since the cataphracts could destroy the Roman blades, but the Romans had overlaps and destroyed the Parthians on a draw. 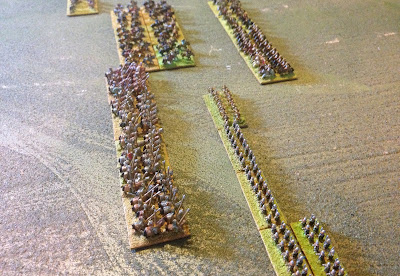 The two lines smashed into each other; pilum faced kontos. 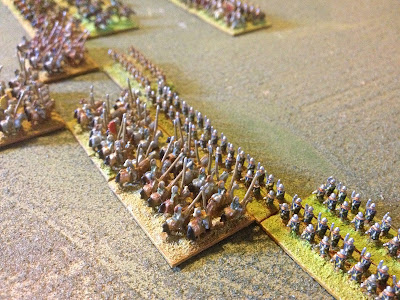 The Parthians were hurled back with losses. 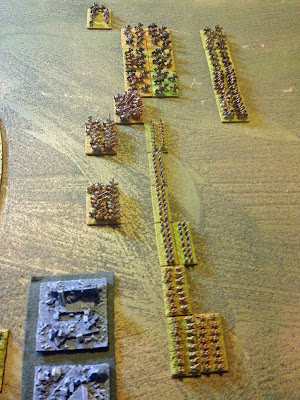 But the Parthian horse-archers swept into and around the Roman mounted. 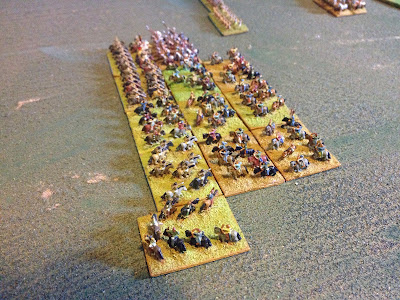 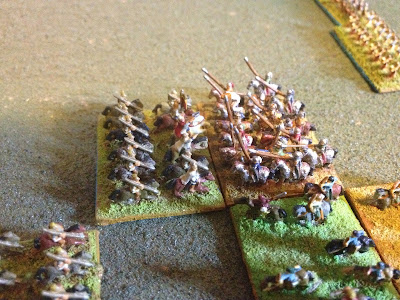 The melee moved back and forth, and the Parthian general ended up in trouble when the Roman's archers moved into his flank. 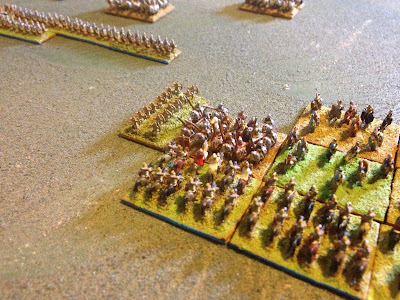 He survived, and the horse-archers slowly wore down the outnumbered Romans. 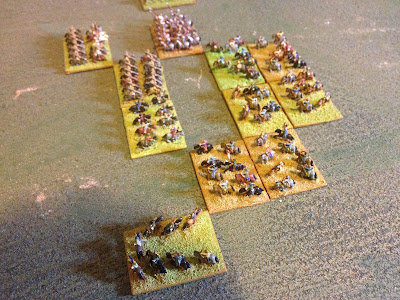 Now it was the Roman general who was flanked. 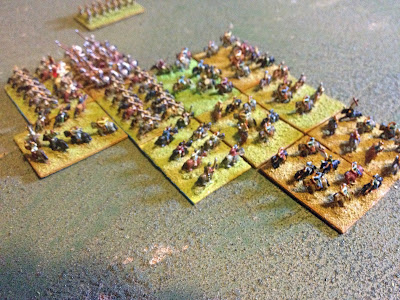 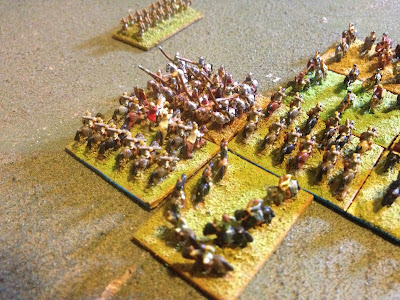 The Romans blades pushed forward, driving back some cataphracts. 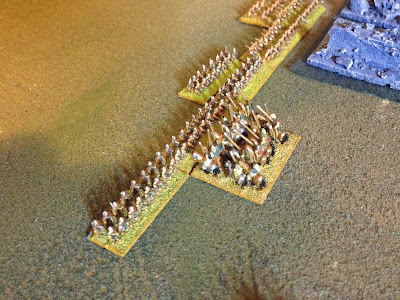 However more Roman cavalry died, and the Parthians won 4-1. 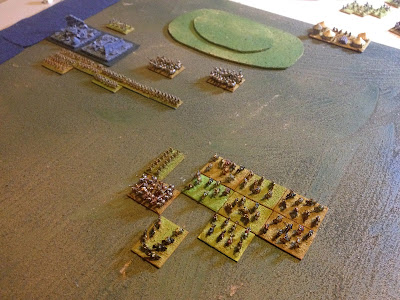 In the second game the Romans defended again. This time they went for some large woods to break up the battlefield, but only one got placed. The Parthians advanced past it, leaving the Romans fighting in the open again. 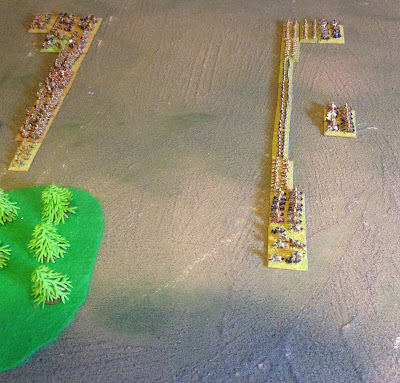 The Parthian plan was much the same, but this time their massed horse-archers were facing the Roman auxilia. 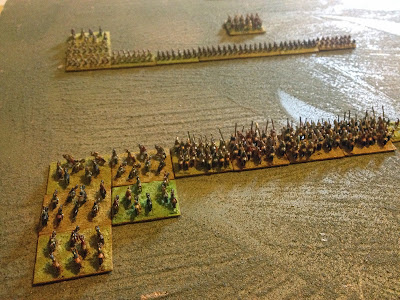 The Parthian right was covered by their subject hill-tribes, and the Romans quickly advanced some of their horse to engage them. 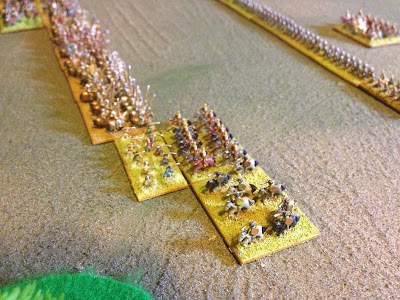 From behind the wood, Parthian horse-archers swept round behind the Roman left, using the DBA 3.0 multiple moves. 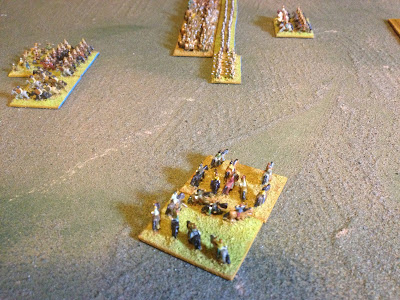 The main Parthian force smashed into the Roman line. 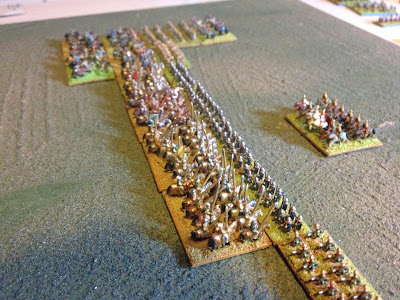 The results were mixed; the Romans lost some auxilia and their bows on their right, and some blades in the centre, but the Parthians lost two of their cataphracts. 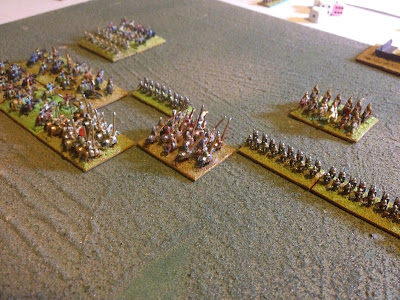 The Romans rode down the hillmen. Both armies were one element away from defeat. The Roman cavalry turned to cover the horse-archers threatening the left of their army. 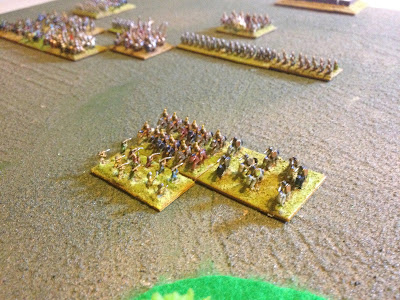 The isolated Parthian king ended up in serious trouble ... 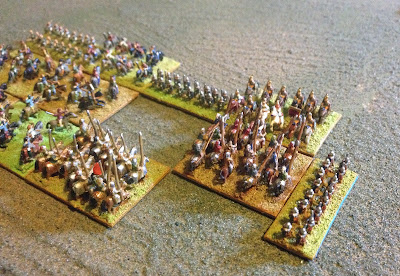 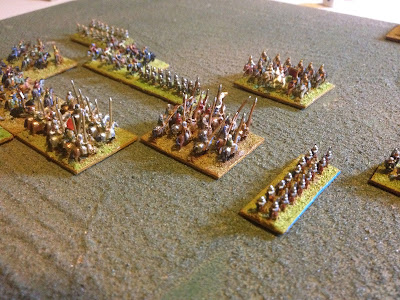 The Parthians then pushed forward again, riding down another element of blades, and picking up a 4-3 win. 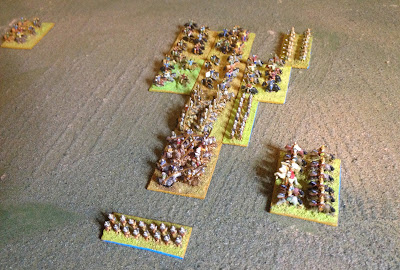 On an open battlefield the Parthians are a dangerous opponent, but victory was not assured for them in either game. It was certainly a far more interesting match than I thought it would be.