Last week I put together a handful of elements to rounds out my Arab Nomads for DBA 3.0. This weekend I fielded the army for the first time.

The army has a central core mixing blades and camels, supported by light horse and either archers or psiloi. It's notable because it is an opponent for a number of 'classic' Roman armies, but can field nearly twice as many blade elements as most of them (at the expense of their trademark camels, it's true).

In the first game they attacked the Parthians. The battlefield was dominated by ploughed fields, since the Parthians wanted plenty of open terrain for their mounted to operate on, but a sudden storm turned them to mud making things tricky for both sides.

Here are the Arab camels, massed on their right flank. 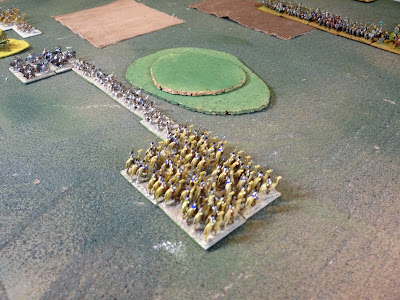 Opposing them were the Parthian horse-archers. 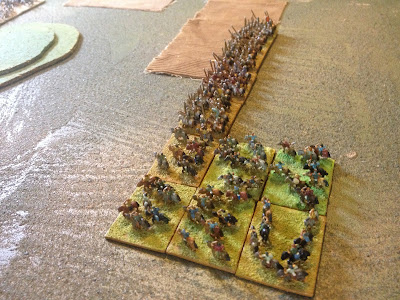 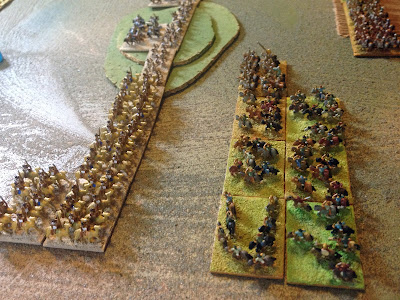 But the fighting started fairly quickly. The Arab archers kept the cataphracts at bay. 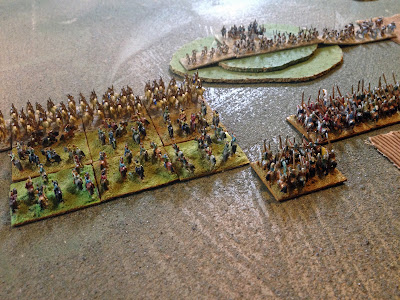 Both lines were broken up, but the Arabs took losses. 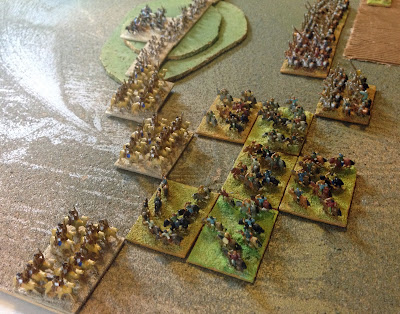 On the other flank there was a minor skirmish between the Parthians' allied hill-men and the Arab scouts. 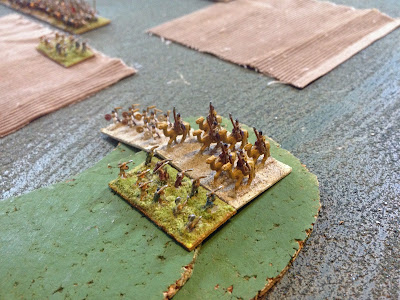 The Arabs reorganised, and so did the Parthians. 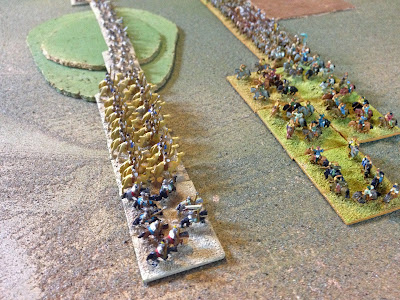 The Parthians then returned to the attack, again engaging the camels with their horse-archers, but supporting them with the cataphracts, who mounted a risky charge up the hill on which the Arab infantry stood. 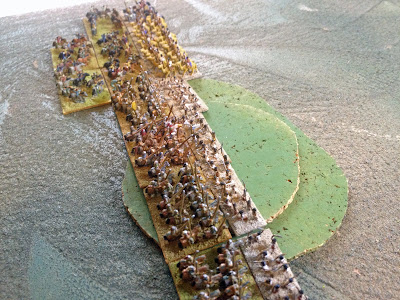 The infantry stood, throwing back the cataphracts, but more camels were lost. 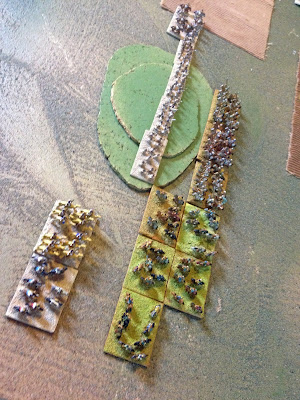 Close to defeat, the Arabs resorted to desperation, charging their infantry down the hill to catch the cataphracts on the lower slopes. 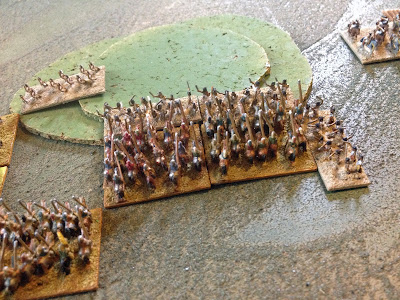 Success was mixed; one element of cataphracts was exchanged for one of infantry, but that was enough to push the Arabs to defeat. 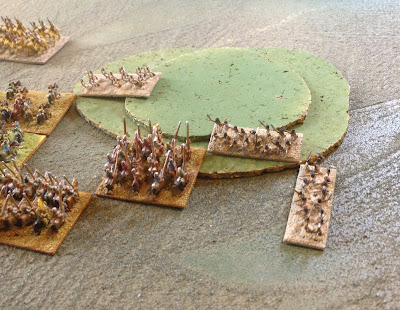 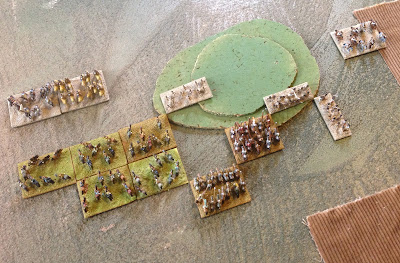 I set up a second game. This time the Arabs were defending their desert home. 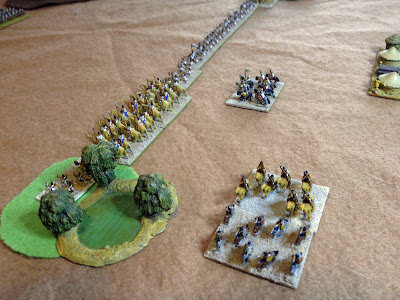 This iteration of the army had more blades and fewer camels. To field it with all options I still need to make three more blade elements. 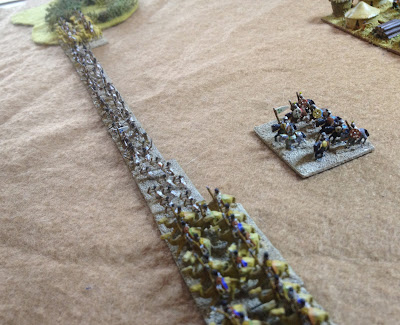 Against them, the might of Rome, supported on their right by their newly painted camel scouts. 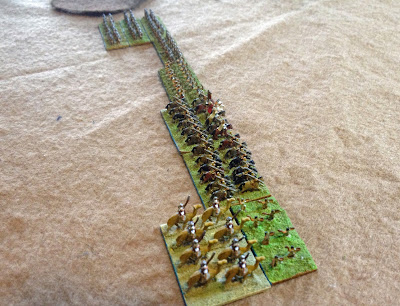 Rome's left was dominated by dunes and a scrub-covered hill. Their auxiliary infantry was deployed there, tasked with turning the Arab right flank. 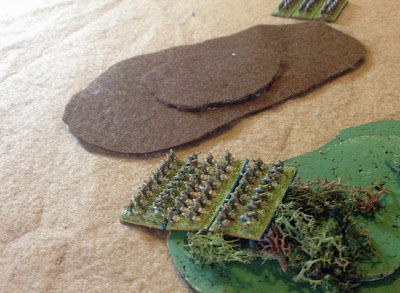 The Arabs took the initiative, though. A good PIP roll on the first turn allowed them to move their light horse onto the Roman right flank, whilst quickly bringing up the rest of their army in support. 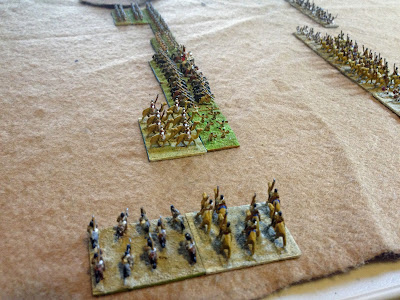 Light troops engaged on the flank. 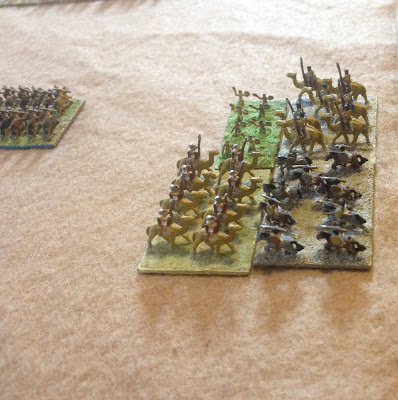 Meanwhile the bulk of the Arab forces charged the Romans. 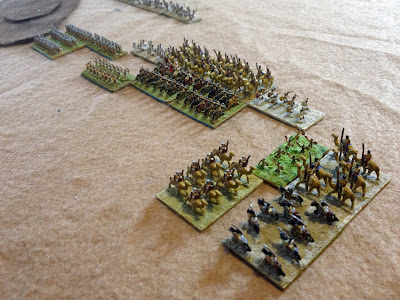 The Romans fell back, losing their slingers. 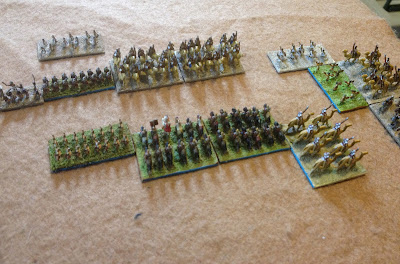 The Arabs pressed their advantage, but the Romans held. 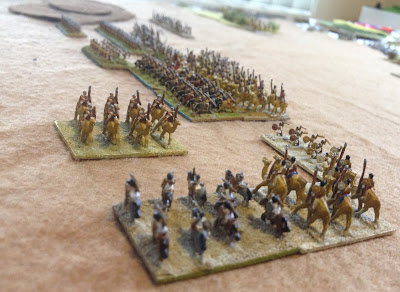 Beyond the camels, the infantry of both sides was now also engaged. 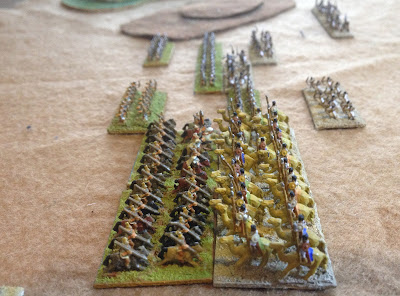 The Romans continued to be hard-pressed, and soon lost their camel-scouts as well. 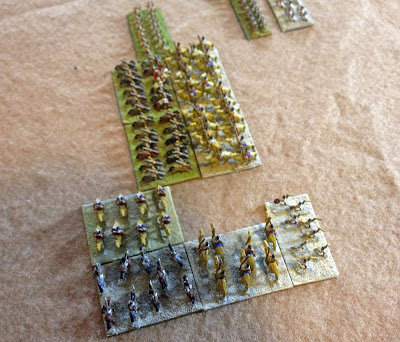 However the Arabs lost some of their camels to a fierce counter-attack by the Roman general. 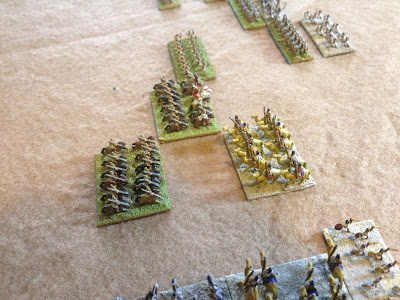 This freed him up to support the rest of the Roman cavalry, and a second element of camels was lost. 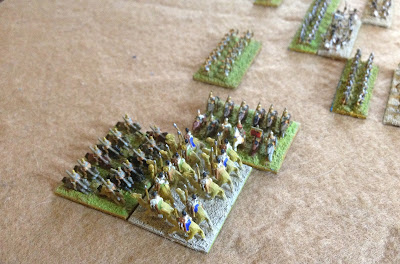 The cavalry could now concentrate on defending the Roman flank. 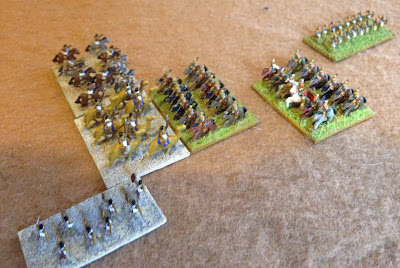 Meanwhile the infantry shoved back and forth on the edge of the dunes. 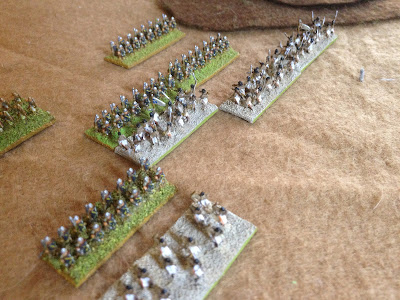 The Roman cavalry held, and some Arab infantry was lost in the centre. 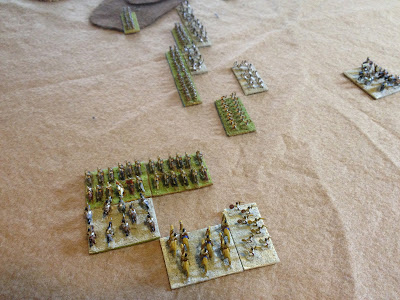 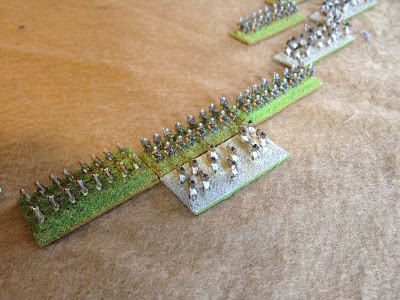 This was a desperate fight, with the initial advantage going to the Arabs, but the Romans holding firm and breaking up successive attacks against them. The auxilia on the left never moved; there were never enough PIPs to consider it. 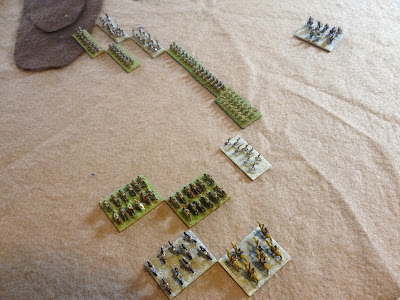 I rather like the Arabs; their camels look spectacular, and their infantry is usefully solid, whilst the light horse provide good support. I shall be repeating these matchups at some stage.