It's been a few days since I've had a chance to sit down with Jenny Everywhere and actually progress her. On Friday I painted the blue plastic with grey paint in order to see what I was working with better. At various spare moments this weekend I scraped and cut with a modelling knife to tidy the figure up. This is the result: 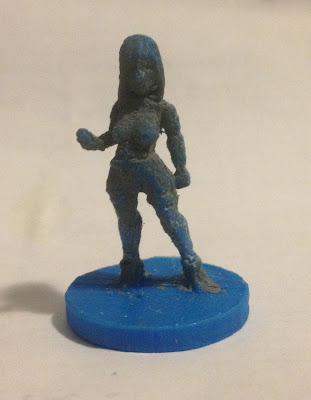 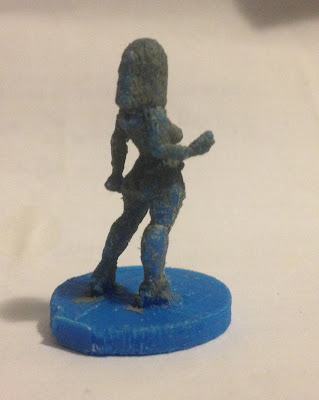 The print process does leave a very rough figure (my printer is cheap and nasty and doesn't do the ultra fine resolution of the ones that, say, Shapeways use), but I did my best. Some of the rough edges would be hidden by any clothing I model onto her, and, as I discovered with my Captain UK conversion, I can work wonders with partially dried wood glue.
The next stage was to decide on clothing. The figure is already modelled with what appear to be high-heel ankle-boots, so I was happy to work with those. The two items required by the character's description were the flying goggles on the head, and a pilot's scarf. Both of these were really the last items which to be added,
There was a piece at the back of the figure which looked like a very, very short skirt, so I decided to build on that and give her a short skirt and a jacket, both things I thought would be within my modelling capabilities. It took about an hour of teasing putty into place, but I got there in the end, and there was just enough left over to do the scarf and goggles. 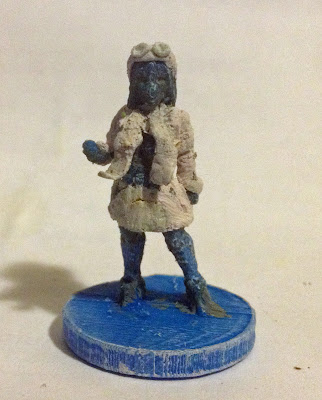 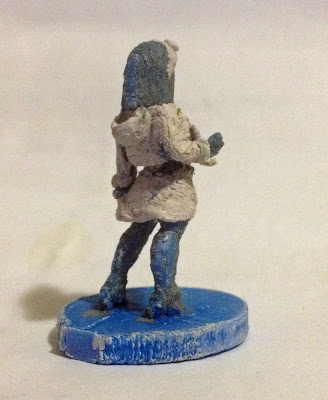 To be honest I'm not totally happy with how she looks now, but I'm hoping that once the putty hardens I can shave and file it a bit to tidy things up. And then there's always the wood glue. and if the worst come to the worst I can hide stuff with paint. The goggles came out OK though.