Kehlenberg - The Relief Of Vienna

It's been a while since I've played Maurice. But there have been games at the club I've missed and, at some stage, talk turned to playing in a slightly earlier period than that which the rules were designed for. There was interest in doing a 17th Century game, using Eastern European armies, and so it was that last night we played a double-handed game based on the Battle of Kehlenberg in 1683, with an Austrian and Polish force attempting to break through the Ottoman siege-lines and relieve Vienna.

I should say from the outset that the figures don't entirely represent the period being payed. Dave and Gary drafted all kinds of units from various armies, but the overall look of it seemed right. Only a purist would quibble.

Basically we played with two 100pt armies on each side - two Ottoman armies defending, against an Austrian army and a Polish one. There were lots of irregular troops in play, especially on the Ottoman side, and a lot of the regular infantry was armed with pikes, giving them a lower fire-factor but a bonus in melee, especially against cavalry.

Here's  long-shot of the table and players - Caesar and Dave took the Ottomans on the left, Ralph the Austrian in the right foreground and I took the empty chair to run the Poles. Gary kept things moving. 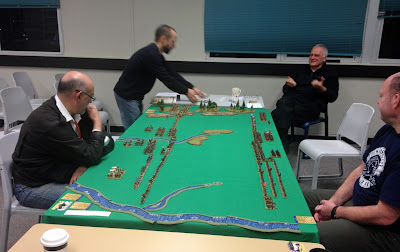 The Austrians - lots of infantry. 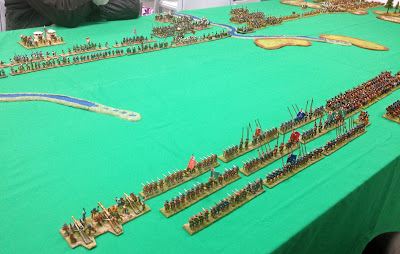 The Poles - less infantry, but some decent cavalry. On the left of the infantry were the 'regulars', including elite winged hussars. On the right were irregulars. 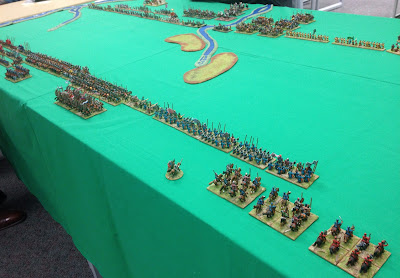 The main Ottoman army consisted of a horde of regular infantry, plus the Sultan's elite cavalry. Behind them was their camp. If their foes could merely contact it, the Ottoman army's morale would collapse. 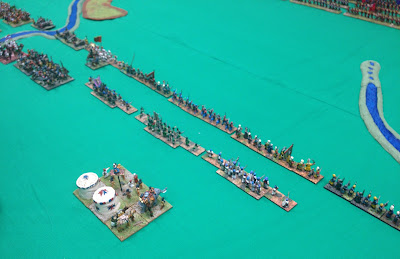 The Ottoman left, facing the Poles. This had some Janniseries and a mass of regular cavalry plus a swarm of irregular troops, both mounted and on foot. 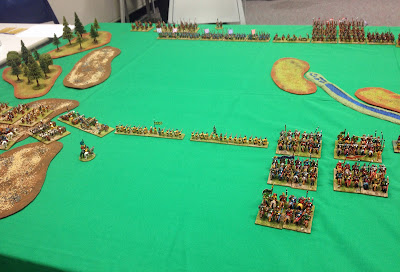 It was these irregulars which opened the battle, infiltrating the woods on the Polish right. 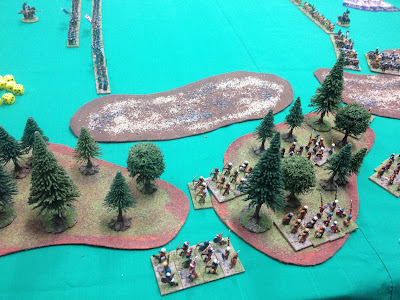 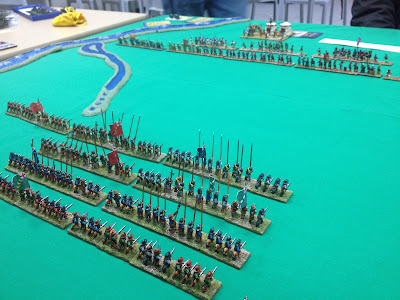 Unfortunately they chose to lead with a cavalry attack designed to punch through the Ottoman line. 120 years after this battle was fought, and with Black Powder, this could have been a viable strategy. In 1683, and using Maurice? Well, you knew it wasn't going to end well. 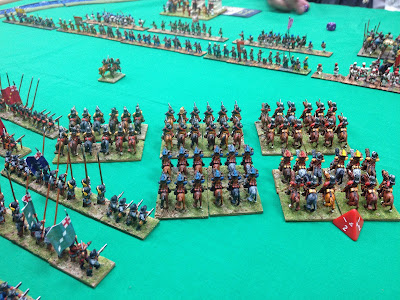 I sent some cavalry int the woods to hold up the Ottoman irregulars, who had found the paths less well-defined than they had originally expected. 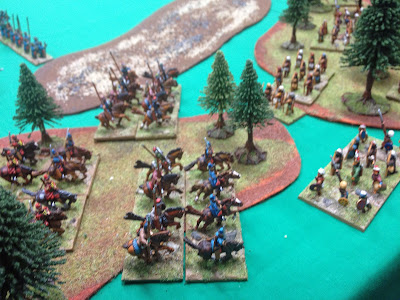 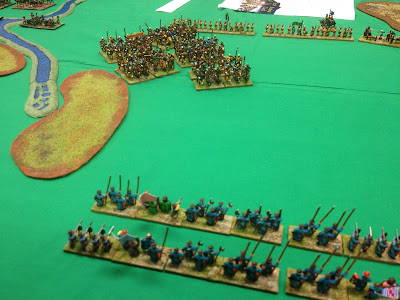 The Austrians crashed into the Ottoman line. Crossing the field they had already taken hits from well-served Turkish guns. Now they took more hits from musketry. 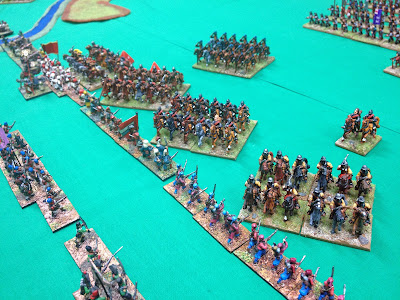 They fell back, preventing their infantry from advancing. 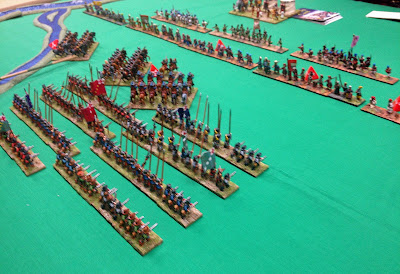 Meanwhile on the other flank irregulars on both sides were fighting. Initially the Poles had the upper-hand, but Turkish numbers soon turned the tide. 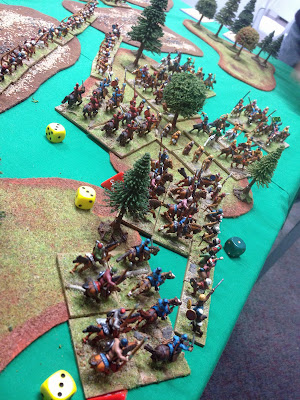 The Polish infantry advanced, hoping that by putting the Ottoman cavalry under pressure with musketry their command focus would shift. 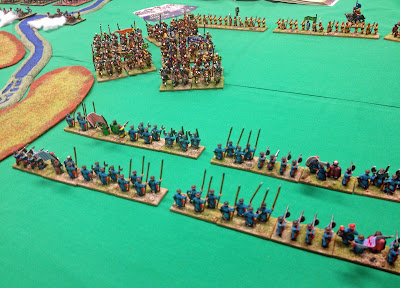 Polish guns opened fire. During the course of the battle they scored no hits at all. The Ottoman guns, however, did fearful execution on their foes. 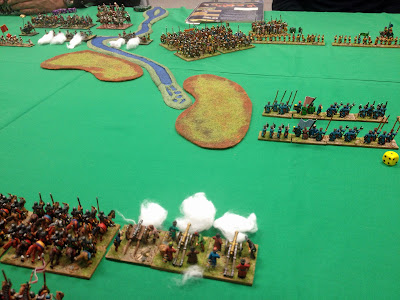 The Ottoman irregulars formed up on the Polish flank and opened up a withering fire. Only an heroic effort in rallying prevented some of the Polish infantry from routing at the first volley. 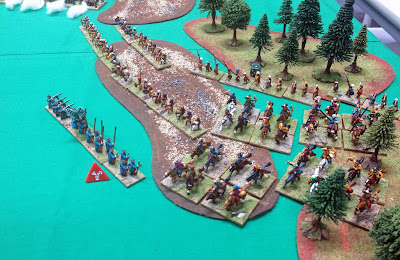 With the Austrians stalling in front of the Turkish line, the Polish commander decided to attack the Ottoman guns, charging across a stream to do so. But the guns put up an heroic fight, and drove off the Polish horsemen with relatively light losses. 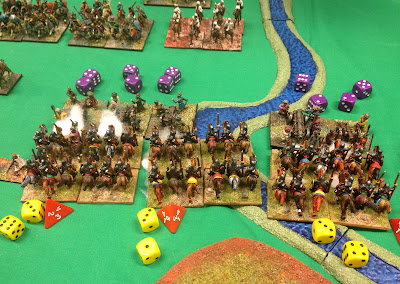 The Poles milled about in confusion as the Ottoman guns then cut them to pieces. 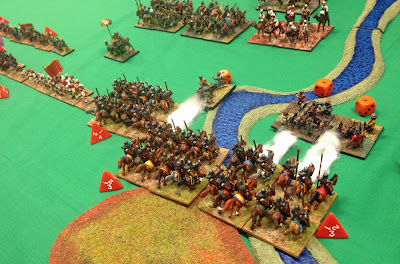 Finally the Sultan's guard charged in to finish the job. 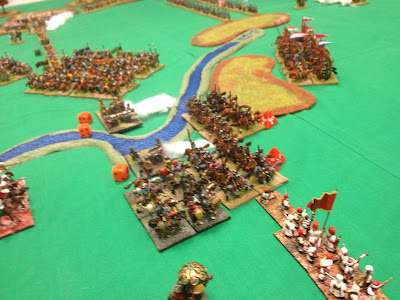 The Austrains had tried to breach the Turkish lines with infantry assault after infantry assault, but to no avail. Their troops were now looking very shaky indeed, whilst the Ottomans seemed as strong and confident as they were at the start. 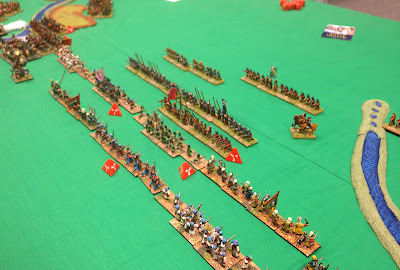 Finally the Ottoman irregular cavalry broke into the Polish rear. With little hope of recovering the battle, Ralph and I conceded defeat. Our morale was close to breaking, whilst the Ottomans still had plenty of fight left in them. 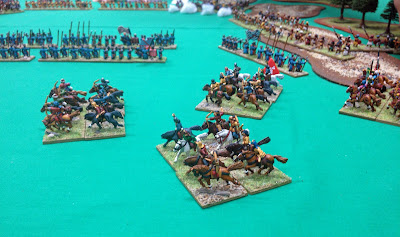 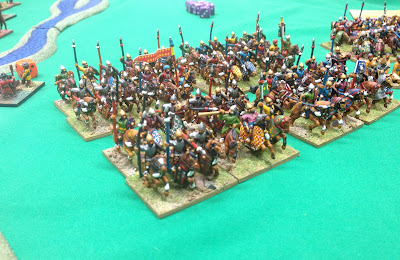 This game was a disaster for the Europeans. We had no plan and no coordination. The Austrians had clear terrain to attack across, but their reckless cavalry attack prevented their infantry from softening up the Turks properly. The Poles were stuck facing an assault between two areas of rough terrain, with swarms of irregulars on one side and heaps of cavalry on the other. Really we should have refused that flank and switched as many troops as possible to the other side in order to support the Austrians. As it was I messed around trying to work out how to organise an attack and, in the end, achieved nothing.

The irregulars were very effective in large numbers, especially with the Skirmishers advantage with gave them a longer range. meanwhile we found that pike-armed infantry is very much disadvantaged in a firefight against infantry that isn't pike-armed, but that the melee bonus for pikes did little to offset this. True they are virtually immune to enemy cavalry, but matched against the enemy foot it was hard work.

We used DBR-based troops for this game, with four 40mm frontage elements to a unit. This looked spectacular, but there were a few mechanical difficulties with the narrow unit depths in relation to the frontage. In future games we are considering sabot bases for the units in order to increase their depth.

Despite the disaster we're keen to give this action another go forcing the Ottoman players to try the attack this time. As ever, Maurice delivered an excellent evening's gaming. And not a randomly-appearing terrain piece in sight!

Thanks to Gary and Caesar for organising the game, Gary and Dave for providing the figures and Ralph for providing a scapegoat on which to pin the collapse of western civilisation.
Posted by Kaptain Kobold at 21:20