Last night we tried a bit of an experiment - playing a straight early Napoleonic battle using Maurice. We tried this a couple of years ago, when we refought Boxtel with these rules, but for that we used them unmodified. This time we played with some minor - very minor - adjustments to the rules and the way the game was set up.

Caesar and Ralph put the whole thing together, using their gorgeous collection of 25mm figures. Caesar selected Marengo as a battle to try. Uncharacteristically Ralph chose to play the Austrians, which led to a lot of confusion as to which side the rest of us are on; normally if Ralph is opposing you in a battle you're fighting the French.

I think I will post Caesar's rules adjustments in a separate post and just get on with the battle report in this one. Update: The rule changes/adjustments can be found HERE.

This was the briefing:

The scenario for this week finds us fighting the War of the Second Coalition on the morning of 14th June 1800, in the opening stages of the Battle of Marengo. The Austrian commander Melas has aggressively pushed an advanced guard across the Bormida River from the northern Italian city of Allessandria and caught Napoleon unawares. Fortunately for the French, Victor’s command hastily responds to form a rear guard along the Fontanone River, to give the strung out French army time to consolidate against the threat.

Here's the table. It's quite small, given the number of units we had and that fact that a Base Width (the unit of measurement in Maurice) was 2". It meant we got stuck into the action pretty quickly though.

The French would be on the right, defending the building/town, and the Austrian would approach from the left. The trees are garnish. 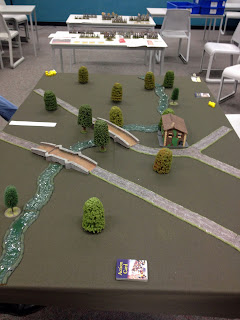 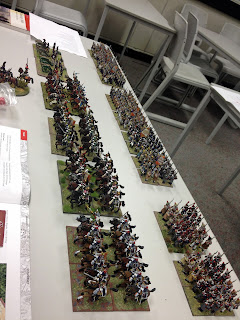 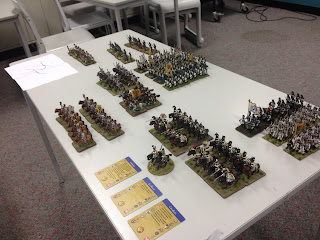 We played two players a side, but with one hand of cards. These were my troops; the French light infantry, supported by some light cavalry. In Maurice terms these were irregulars. 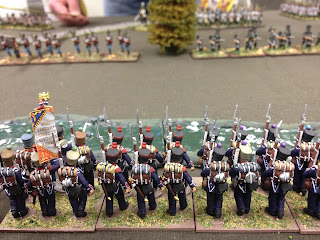 Caesar had the bulk of our troops; the infantry and cavalry. Opposing them was Dave, with the Austrian cavalry. 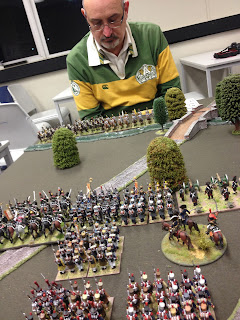 Ralph had the Austrian infantry. 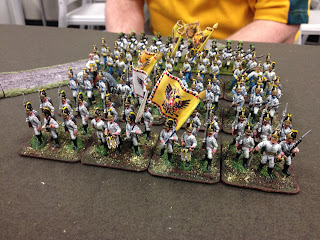 Ralph also had the Austrian light troops, who opened the battle with an attack on their French counterparts. The French got the worse of the initial firefight, despite their superior range, but when the Austrians charged home The French held firm and saw them off with considerable loss. 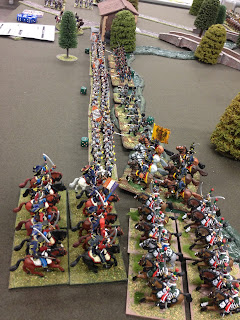 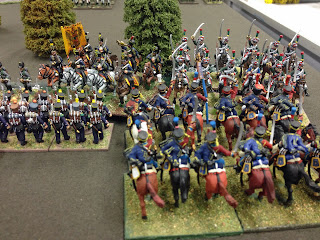 Unfortunately the Austrian lights were followed by the main Austrian force. Most of the French light troops melted before them, but when the Austrian advance halted one unit kept up a steady, and sometimes effective, fire on them. 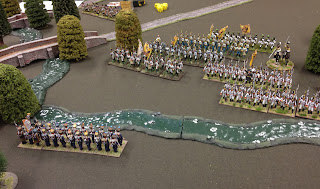 The Austrians did look rather splendid, though. 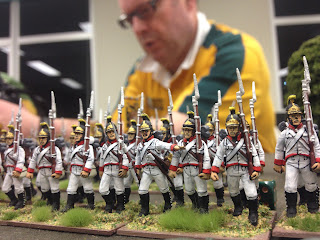 On the other flank the Austrian cavalry prepared to attack. 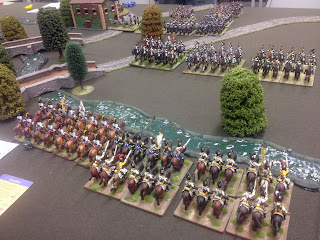 It charged the French. In this battle the Austrians have an edge in terms of both quality and quantity of cavalry. 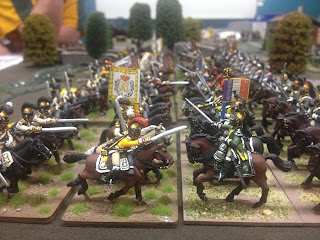 Caesar used the cavalry action as cover to withdraw our infantry, moving it from the left over to the right where it could face the Austrian foot. But the action ended more quickly than we thought, with the French cavalry defeated, and left the rear of the retiring French exposed. 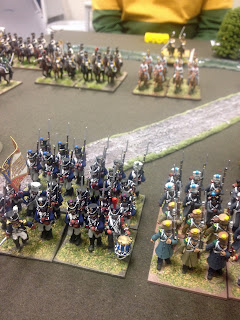 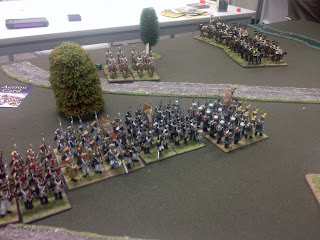 The Austrians charged, but the French held. In this game the massed formation represents squares to some extent. 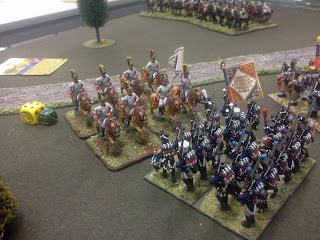 At that point, with both sides really only a couple of units from breaking, we had to call time. It was still a close game, so could be considered a draw.

Whilst purists could probably point to a whole raft of things that aren't correct for a game set in this period, we felt that it ran pretty well and gave the right feel. It certainly looked spectacular and actually rattled along at a good pace as well. It's certainly something we'll try again.