The 'Escape' scenario is one I've played a couple of times before, but I have to say I don't like it that much. I'm not sure why, but I have never found it gives a satisfying game. Still, I have chosen to play and document all of the scenarios in the book, and it's the next in line, so I bit the bullet and got on with it.

The scenario sees a raiding force rushing to escape enemy territory as their foes close in on them from all sides. They enter along a road and must exit at east three of their six units off the opposite side before the end of the game.

I thought that an ACW setting was best for this particular scenario, so set it up as such and rolled a couple of armies. The Confederates rolled three infantry regiments, two of Zouaves (elite infantry in the One Hour Wargames rules) and one battery of artillery. A formidable force whichever side they'd be playing. 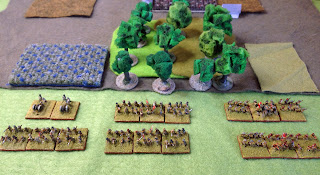 The Union also got three infantry regiments, two batteries of artillery and one regiment of cavalry. 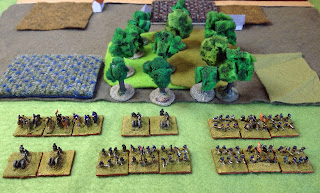 The Union ended up defending. They started with one units deployed; an infantry regiment. The rest of their units would appear as reinforcements. The Confederates would enter at the left, looking to exit the board via the road at the right. Union reinforcements would appear on the hill at the top left, to the left of the wood and finally one unit on the right-hand edge.

For context I saw this scenario taking place during Jackson's Valley Campaign of 1862 - it certainly has the right feel, with a Confederate brigade trying to outwit and outmaneuver  their Union opponents. 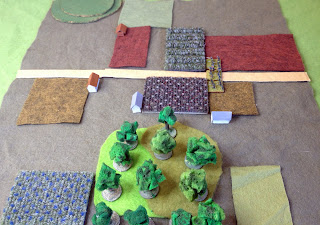 Another view of the deployed Union regiment. The fields are garnish; the only significant terrain in this game are the woods, the hill and the road. 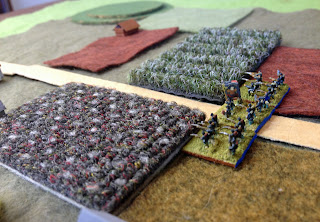 The Confederates advanced rapidly down the road, their advance spearheaded by the elite 'foot cavalry'. 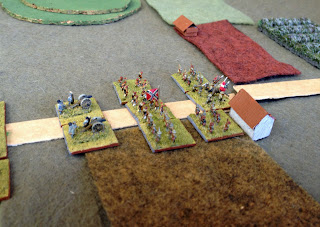 With their way blocked by Union troops the Confederates swung into line, and prepared to engage. 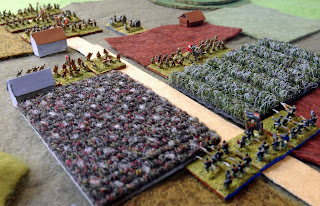 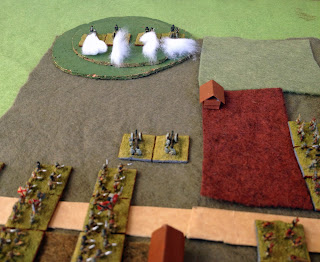 The Union troops opened fire as well. The battle had begun in earnest. 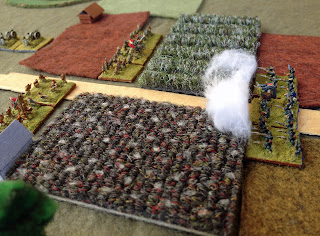 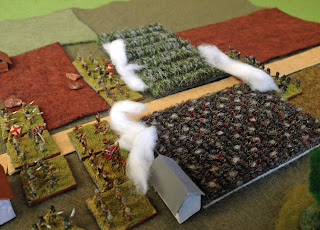 ... and a devastating volley saw the Union regiment break and run!

(I was using my variant combat system. The Confederates rolled six dice total, looking for a 4+ to hit. They scored five hits, enough to destroy the enemy unit in one shot.) 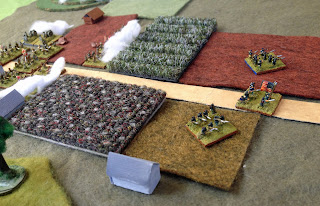 This was something of a disaster for the Union, and the road was clear and the Confederates well-positioned to race along it and escape. Most of the Union reinforcements would come on behind them, which meant a chase that they couldn't win.

The Confederates reformed and moved along the road ... 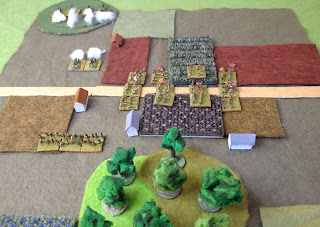 ... just as the next lot of Union reinforcements arrived. The cavalry moved to engage a blocking Confederate infantry regiment, as they couldn't move through the woods. The infantry wasn't restricted, and moved through the trees to try and intercept the Confederates before they escaped. 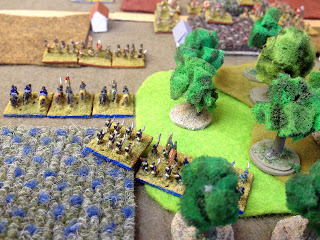 The cavalry dismounted and a firefight ensued. 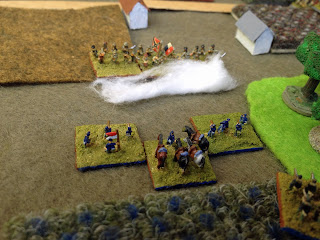 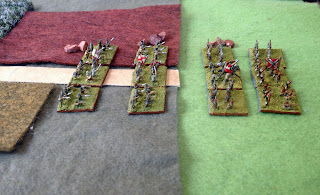 ... as the last lot of Union reinforcements arrived. 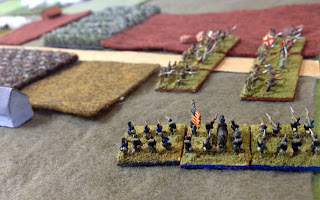 Two Union infantry regiments were formed up in range of the Confederates now ... 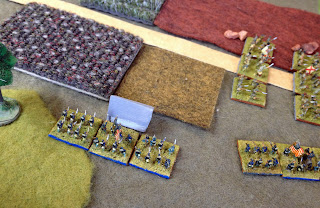 ... but the Confederates moves a third unit off the table to win the game on the seventh turn. 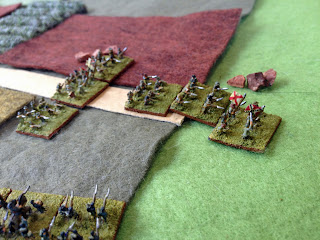 The fourth regiment would escape easily as well, despite the casualties it had taken from long-range artillery fire from the hill. The Union could only content themselves with the fact that the Confederate artillery and the final infantry regiment were probably now trapped and outgunned. 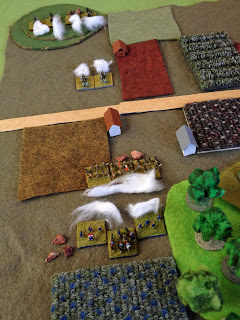 The game was won on that first volley from the Confederate elites which swept away the Union blocking troops in one go. Had that Union regiment remained in place for one more turn it would have delayed the Confederates long enough that they would have had to fight their way past or through the other reinforcements. The Union artillery on the hill would have proved especially deadly, being able to support and pick off vulnerable units. As it was it accounted for most of the hits on the Confederates.

Here's a shot of the final positions, with the One Hour Wargames book in shot to show how small this game really was. 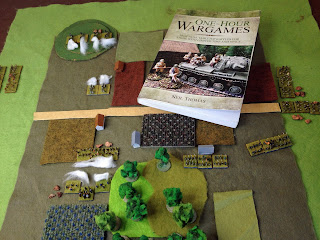 Follow the rest of the scenario refights HERE
Posted by Kaptain Kobold at 13:11