It's a while since we've played Longstreet, so in order to give us a reminder how to play Ralph put on a small scenario based around the 1864 Battle of Spotsylvania. As seemed to be the norm for that era, huge lumps of Union troops would be hurled at Confederates in defences, in a preview of WW1 but without the classy aircraft.

The Union had six infantry units with which to take the two Confederate defensive lines. The Confederates defended with two infantry and two artillery units. 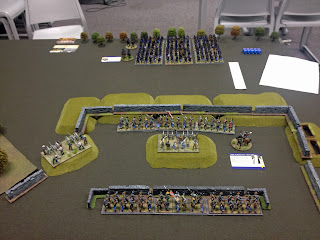 The Union assault, all formed up. They were forbidden to fire until they had assaulted the first line of defences. 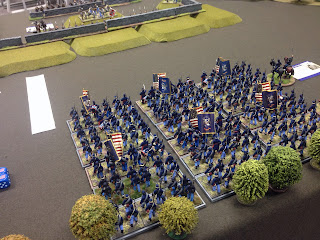 We both had personalities in command which gave us bonuses. I had a Fire and Brimstone Preacher, which gave me a defensive bonus in close assaults.. 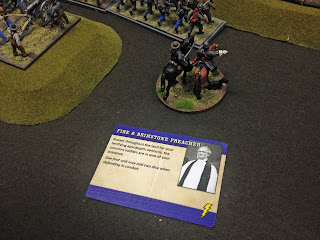 The Union advanced rapidly, and didn't take as many casualties as I'd hoped from fire as they came in. However the shatter-point, which determines when an army was beaten, was quite low in this scenario, so maybe it would be enough. 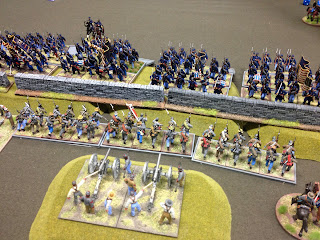 The Union reached the defences, in relatively good order. The Confederate commander was wounded at this point, so the cuing plans he had for repelling the assault were lost, leaving the boys in grey defending with nothing but bayonets and determination. 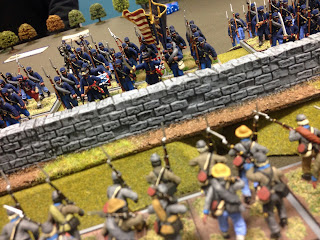 Their commander. He was looking at lot better at this point. 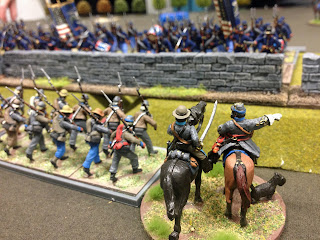 The Union took the first line of defences, but at that point their morale broke. Technically that was game over, with, according to the victory conditions, the game ending in a draw. However we still had a good hour of play left, so we rewrote the victory rules and carried on. 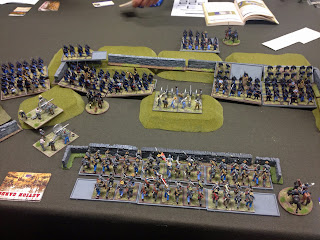 The final gamewas close, with the Union morale still wobbling as they took the second line of defences, causing the Confederates to withdraw in good order. 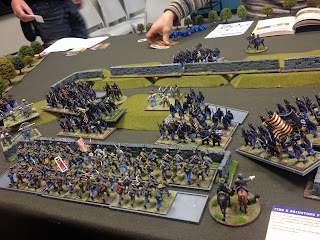 In the end we allowed the Union to temporarily reduce the number of casualties they had taken by two for each line of Confederate defences they had sole control of. This gave them incentive to push forward, and a bonus for success. Thinking about it o the way home I realised that you could achieve a similar effect by counting the defensive lines as Confederate units, thus increasing the shatter-point for both sides (it's based on the number of stands in the smallest army). If the Union have uncontested control of a line then the Confederates count it as lost stands (two per line, say) when the Union come to determine victory at the end of their turn.

Thanks to Ralph for putting together what was a fun little game.