Last night we played the 1461 Battle of Towton using big-battle DBA. And it was a big DBA game, with about 75 elements on the Lancastrian side and 50 or so on the Yorkist. In the actual battle the numerically superior Lancastrians attacked a smaller Yorkist force, but into the teeth of a howling snow-storm. The wind negated their superior number of archers. They eventually lost what is believed to be the largest, and bloodiest, battle fought on English soil.

We had a few scenario specific rules in place to cover the effects of the weather on archery, as well as reduced command distances and rules for the Lancastrian ambush from the woods on the Yorkist left and the arrival of a force under the Duke of Norfolk in support of the Yorkists.

Deployment was kept deliberately tight in order to force us into multiple lines. 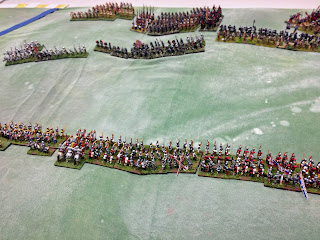 Ralph and I, playing the Yorkists, deployed in three lines, two of archers and then one of dismounted mean-at-arms. 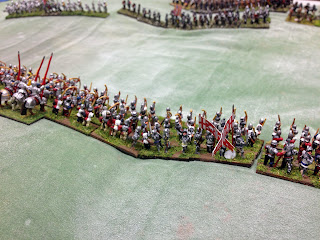 The Lancastrians, under Caesar and John, decided to hold their archers in reserve, recognising that they would be outclassed in an exchange of archery, and opted for a direct assault with their men-at-arms. 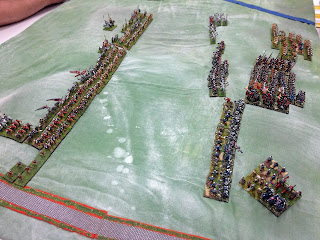 It all looked very impressive. The Yorkists were deployed on a ridge, so we decided to stay put and make the most of our terrain advantage. As the Lancastrians advanced our archery broke up their lines, but they kept coming. 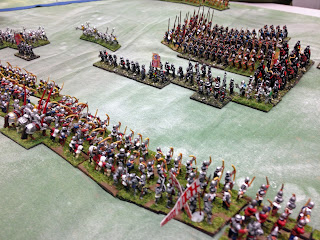 The game was smaller than you might think, as you can see. 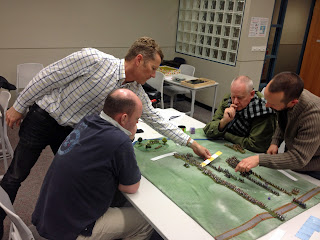 Yorkist archers, confident in their position. 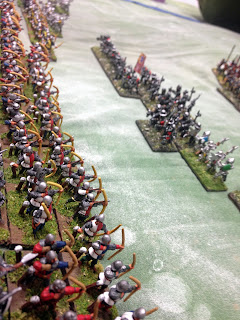 Too confident. We're new to DBA 3.0 still, and had forgotten that recoiling troops don't push back troops behind them as easily. Once the Lancastrian men-at-arms hit us our tight triple-line became a deathtrap for the front rank of archers and I forgot that, in DBA commands break when they have lost a third of their strength, not half as in HOTT. So the destruction of its front rank also saw Warwick's command in the centre break and eventually run. 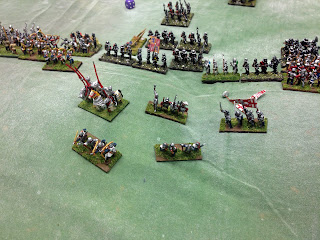 The Duke of Norfolk turned up at this point. 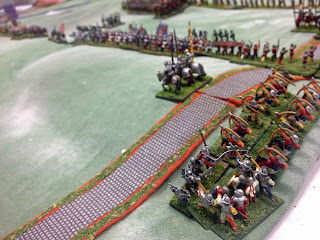 But he was too late. The Yorkist right wing was under pressure now, as was the left. 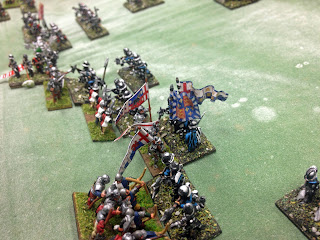 The Lancastrians exploited the gap they had made in the centre of the Yorkist line. 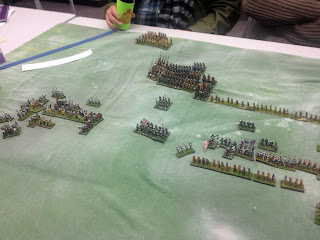 The Yorkist left win broke first, and with it the army. 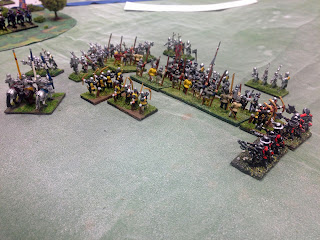 The Lancastrians held their archers back for the whole game, winning the battle with a steady advance by their men-at-arms. 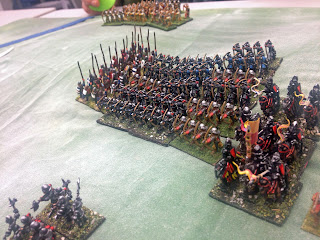 This was a lovely looking game with some nice scenario-specific rules to give it flavour. It probably needs some tweaking and fine-tuning, but it's certainly one we'd do again.