The Battle of Yellow Knob

Missouri, 1861. General Coleman, the local Union commander, has become aware of Confederate troops massing in the area of Yellow Knob. He dispatches four regiments of militia to feel out and drive off the enemy, supported by artillery and a regiment of US regulars.

As they advance down the Yellow Knob Road they encounter Confederate troops on the hill which gives the area its name; a regiment of artillery, supported by artillery. Their approach has not gone unnoticed, however, and scouts report elements of the Missouri State Guard moving up in support.

The Union brigadier decides to seize the hill before nightfall.

So the stage is set for anther One Hour Wargame; the first I have fought for a few months.

I decided to use the ACW rules, but with the modifications I've used for other games. These are:

(ii) Units which pivot both at the start and the end of their move can only move half speed.

(iii) Elite units (the 'Zouaves' in the ACW rules) cause one dice of hits on all friendly units within 6" if they break, representing the morale effect of their loss.

I used my 6mm figures, with each unit being three 20mm square bases. The board was 15" square and I used 1cm for 1" in the rules.

The initial setup, with one Confederate regiment on the hill, plus a supporting artillery battery. 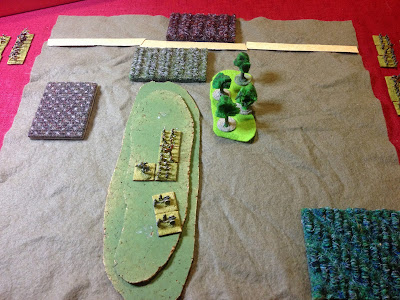 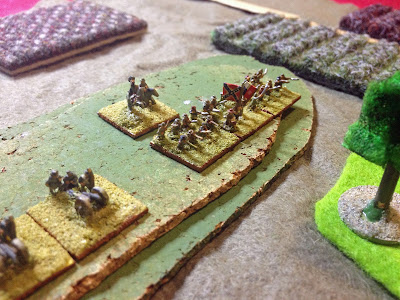 In the ACW rules there is no close combat, so the hill offers no real combat advantage. The Confederates went for an active, forward defence in the woods. 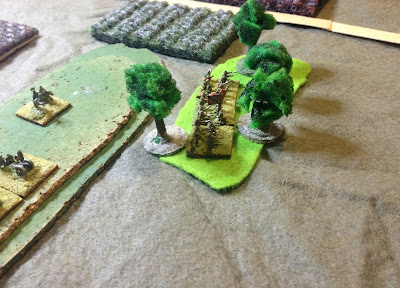 The Union troops marched into view, led by the regulars. 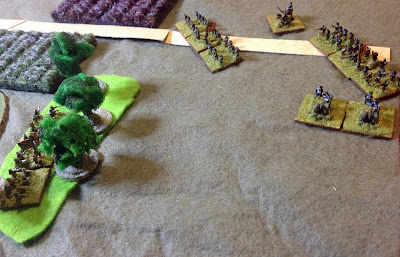 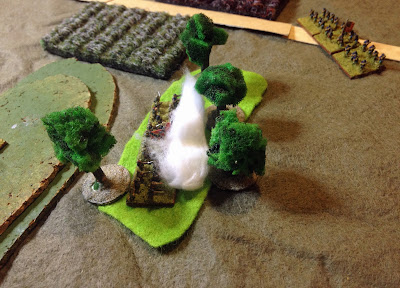 The Union regulars returned fire whilst the other regiment and the artillery moved into position. 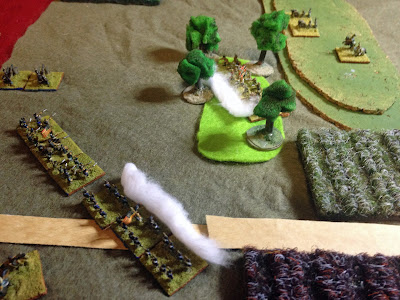 A steady firefight ensued, but the first Confederate reinforcements were arriving. 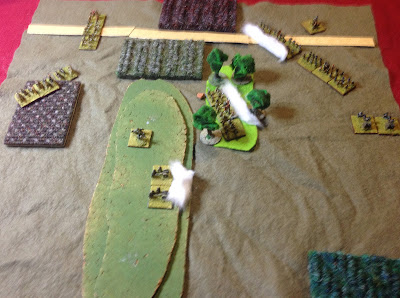 A regiment of Confederate cavalry moved to support the guns. 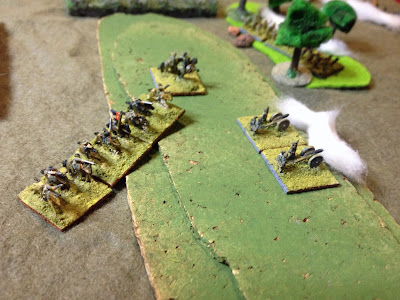 Both sides were taking hits in the firefight, with the regulars' steadier discipline offsetting the Confederate's cover advantage. But a second Confederate unit had moved into position on the road. 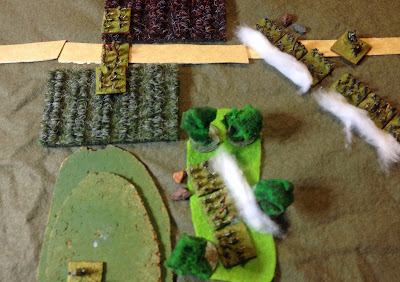 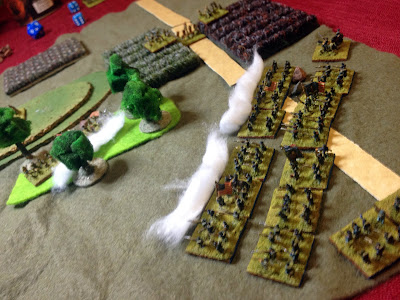 The Confederates in the woods broke. 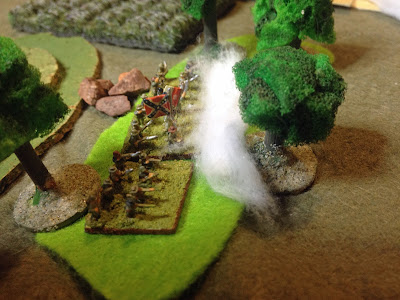 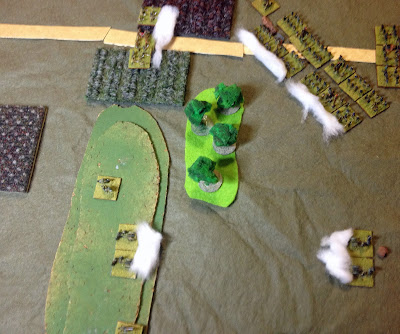 However the Confederate cavalry was not on the Union flank. They dismounted and opened fire. 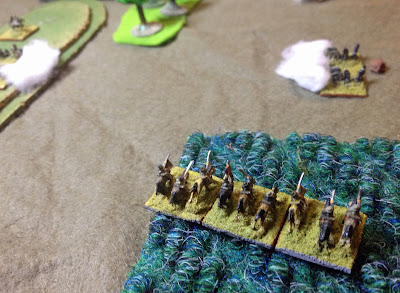 With the woods clear of enemy troops the Union advanced towards the hill. 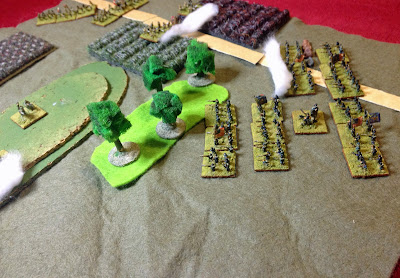 However the regulars retreated from the heavy fire they were receiving from the road. 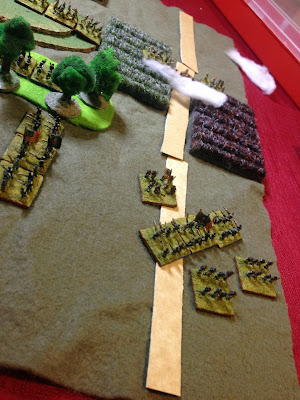 The position about halfway through the game. The Confederates were moving to establish a line on the hill, whilst the Union moved to cover their artillery from the fire of their Confederate counterparts, leaving it free to engage the cavalry. 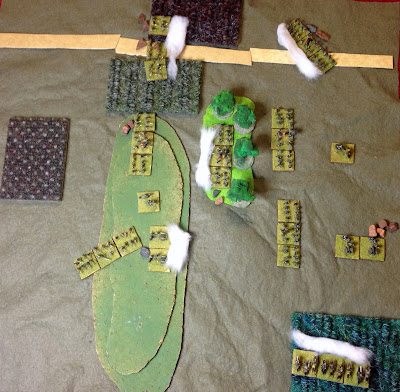 Now the Union army had control of the cover offered by the woods. 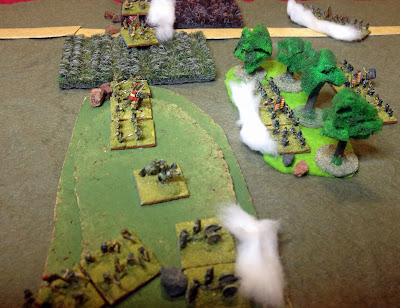 The Union artillery engaged the Confederate cavalry, but it was too little too late; they had taken too much damage from earlier exchanges and withdrew. 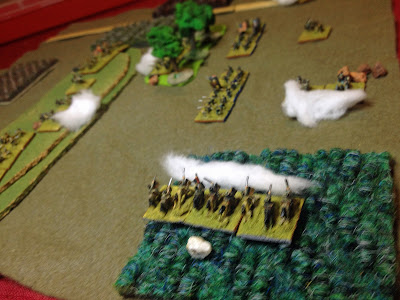 However on the other flank Union infantry cleared the road, opening up the Confederate left. 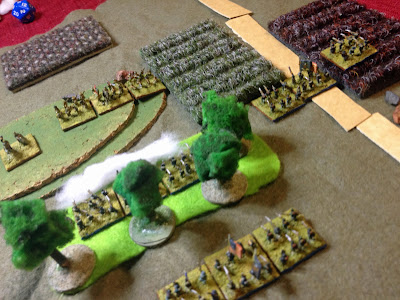 Another Confederate regiment routed, leaving the eastern end of the hill open. 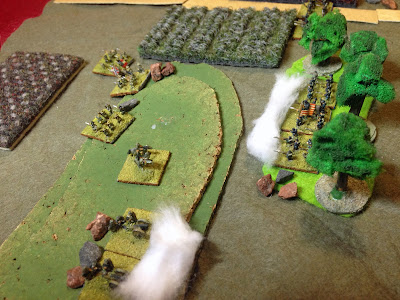 The Confederates were down to three units now, and their artillery was badly mauled. The best they could now hope for was to still be contesting the hill at nightfall. 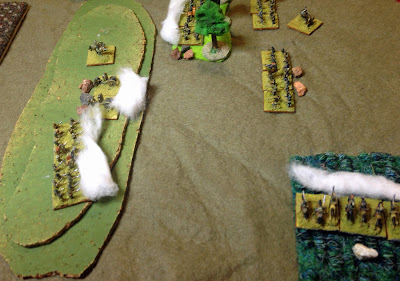 Union regiments advanced onto the hill, taking the Confederates under fire. 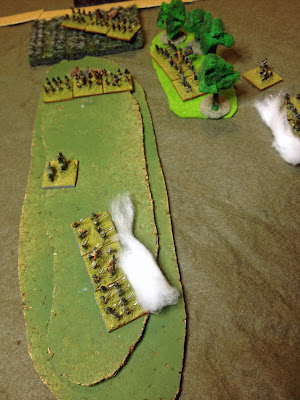 The Confederate infantry fought back ... 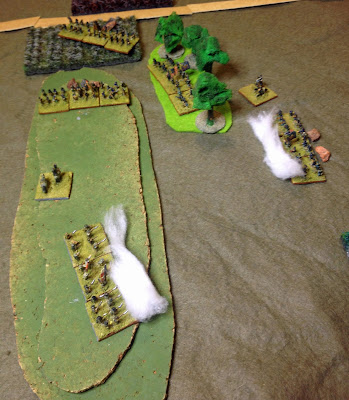 ... and with the support of the cavalry drove off another Union regiment. 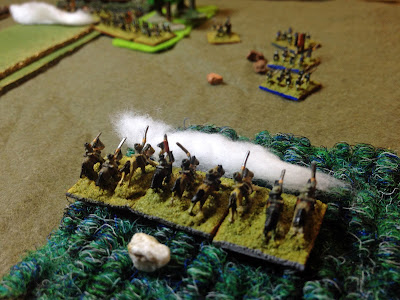 However the Union had turned the hill into a killing ground, and some good rolls saw the Confederates shattered. 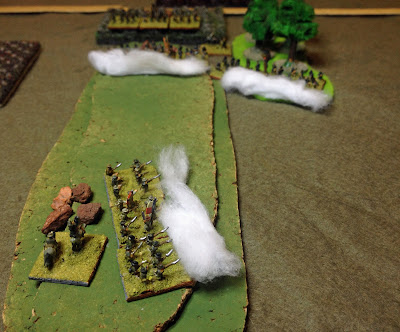 They routed, leaving only the cavalry. 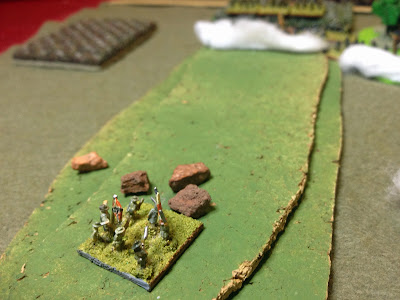 Which, having moved to the flank of the Union infantry in the woods, now turned and rode back to the hill. Night was falling and in the gathering darkness the cavalry were able to run the gauntlet of Union fire with no significant loss. 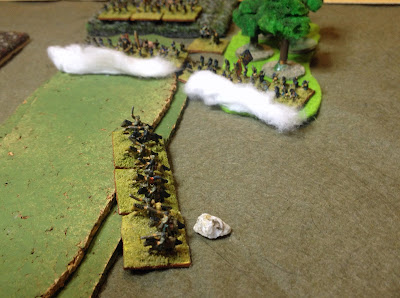 As night fell the hill was still contested. the Confederates would probably withdraw during the night, but they had held the Union to a draw. 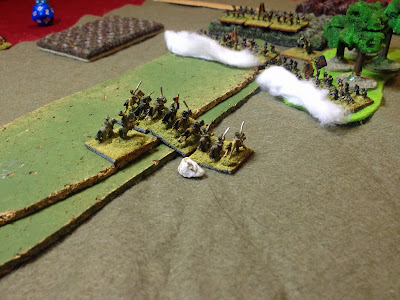 A final shot of the Union firing line. 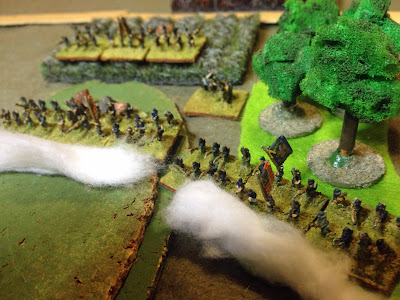 I quite enjoyed this game; the changes to the combat rules make firing less predictable, allowing for bolder, riskier plans. The lack of close combat didn't seem to be an issue, and I felt that the game actually looked and felt right. The star units were the Union Regulars, who held on under heavy fire just long enough for the rest of their army to get organised, and the Confederate cavalry who used their mobility to get into good firing positions and to deny the union a victory at the end of the battle.

Follow the rest of the scenario refights HERE
Posted by Kaptain Kobold at 23:23