I have played, and documented, this scenario on this blog before. Its loosely based on Quatre Bras and has some similarities to the GNW battle of Lesnaya as well. I played it out using my ACW armies and my modifications to the rules for that period in One Hour Wargames. For fans of the Rocks as Markers, this is a Five Hit set.

Here's the terrain. There are woods to the left (passable to infantry in these rules) and a marsh to the right which is impassable to all troops. The fields are just garnish. The objective is the crossroads in the distance. The attackers - the Union in this game - will enter from the bottom of the picture. The Confederates have two units on the board, in the gap between the terrain pieces, and are expecting two groups of reinforcements from the roads at the top and at the left of the picture. 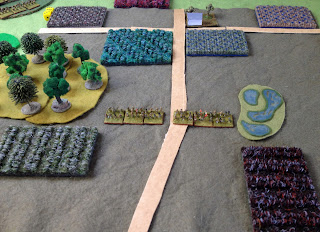 The Union troops arrive along the road. They led off with two regiments of infantry, followed by a couple of regiments of cavalry. 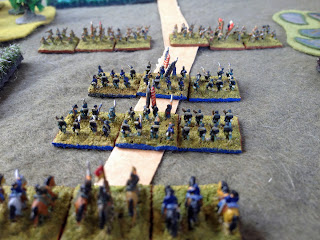 The Union troops continues to arrive, with the cavalry swinging to the right to pass around the marsh and make a run for the objective. The lead infantry took its time swinging into a line to oppose the Confederates. Whilst doing so they had already taken some hits. The Union had one unit of Zouaves, which represent better quality infantry in these rules. They formed up behind the lead units as a reserve. 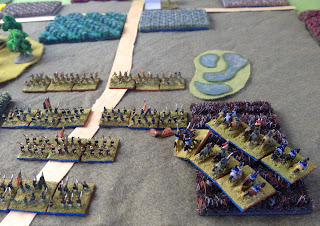 As the firing really got going in the centre, the Union cavalry continued its move around the flank. 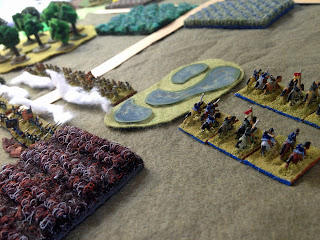 The first Confederate reinforcements arrive - artillery and some better-quality infantry. 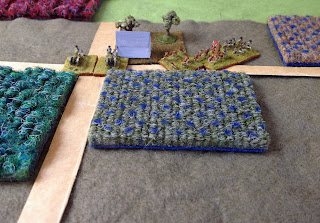 The fight in the centre did not go well for the Union as the Confederate defenders held their ground. 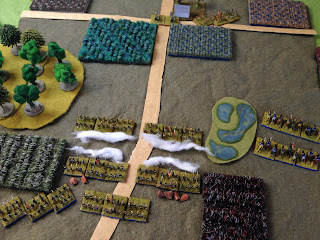 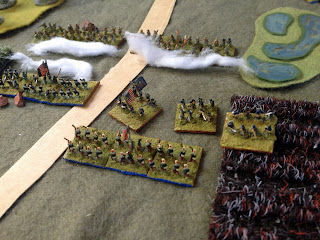 The Union Zouaves join the firefight in the centre, and the cavalry engages the Confederate reinforcements. Meanwhile anther Union regiment was working its way to the woods. 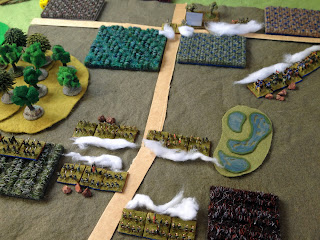 The fight in the centre. 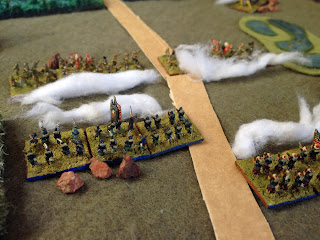 Although outnumbered two to one, the Confederate elite troops were more than a match for the Union cavalry, especially with artillery support as well. 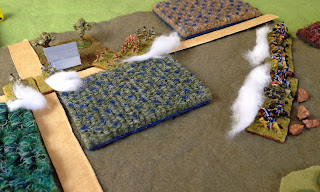 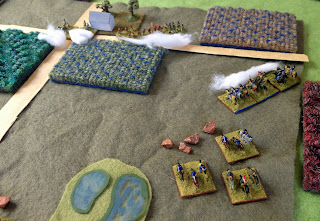 And more Union infantry fled. The Union were down to three units now, against four Confederate units. And there were Confederate reinforcements to come. 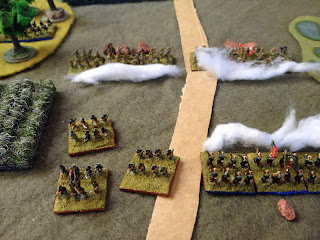 The Union Zouaves were fighting alone against the main Confederate line. However they were inflicting hits and receiving few back. 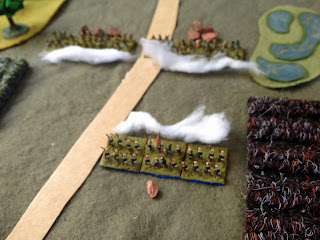 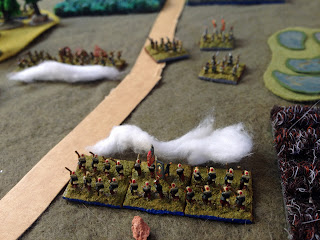 But so did the remaining Union cavalry regiment. 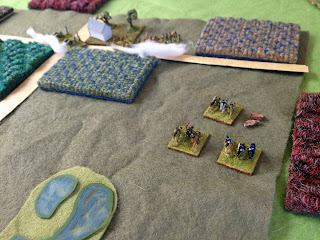 The Zouaves finally cleared the centre, and could move on the crossroads. 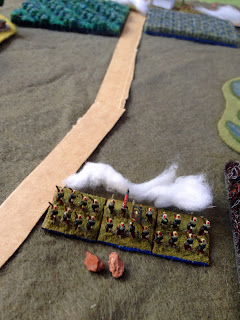 Meanwhile the final Confederate reinforcements had arrived. But the Union occupied the woods and a firefight ensued. The Confederate artillery supported the newly arrived troops, but the woods offered good cover and the Union infantry held firm 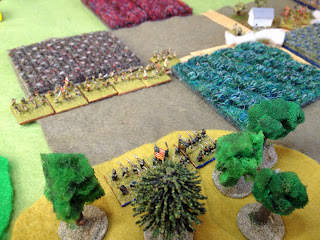 An overview of the battle. The elite units of both armies were facing off in the centre now. 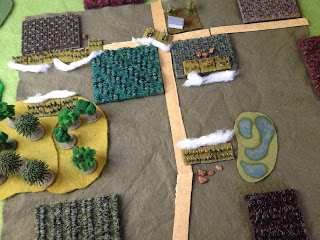 The Confederates broke first, but the Union Zouaves were wobbling on four hits. 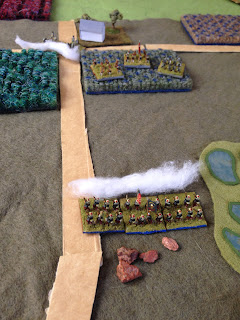 The Zouaves advanced on the crossroads, still defended by the Confederate artillery. And, try as it might, the artillery couldn't take that last hit off them. 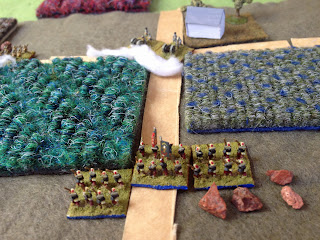 The artillery broke and ran. But this was the last turn; the Union didn't have a move left with which to take the crossroads. 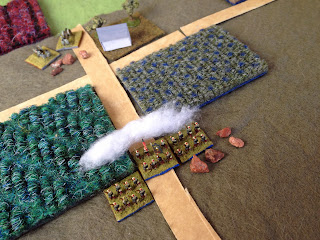 On the Union left the firefight continued, but the battle was now essentially over. 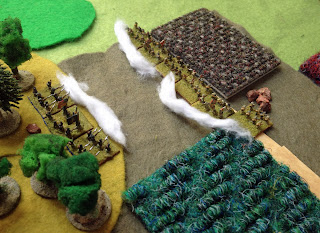 The Union came close to winning, but only because their Zouaves survived against the odds on the last couple of turns. They made two mistakes which really cost them the game. Firstly they spent a turn too long getting into position at the beginning of the game, instead of making sure at least one unit was shooting from the second turn onward. They casualties they took in the first two turns counted against them in the long run, ensuring that they would struggle in the firefight. Secondly, the advance through the woods was a good plan, but the unit making it ended up poorly positioned. Had it been slightly more towards the centre it could have covered the point at which the final Confederate reinforcements would arrive, but also have engaged the Confederate artillery on the crossroads for a turn as well. Had the artillery taken a hit or so before the Zouaves engaged it, it might have broken a turn earlier, allowing the Zouaves to occupy the crossroads on the final Union turn.

Given how badly things seemed to be going for the Union at the start it's amazing how close the final game was.

Once again the rules held up well, with the multiple dice hit system making combat less predictable than the system in the original rules.

Follow the rest of the scenario refights HERE
Posted by Kaptain Kobold at 14:38