As promised, here's a playthrough of my Red Barchetta scenario for Machinas.

The Red Barchetta itself is a repainted Hot Wheels Corvette; the best I could find at short notice. The MSVs are two suitable cars from the collection I now have.

I chose Deep Treads and Speedster as my traits, giving me reasonable capabilities on both curves and straights.

I generated sections one turn in advance, so I knew what was coming next, but not beyond.

And away we went.

Section 1 was a curve. Both MSVs moved into position to pass. 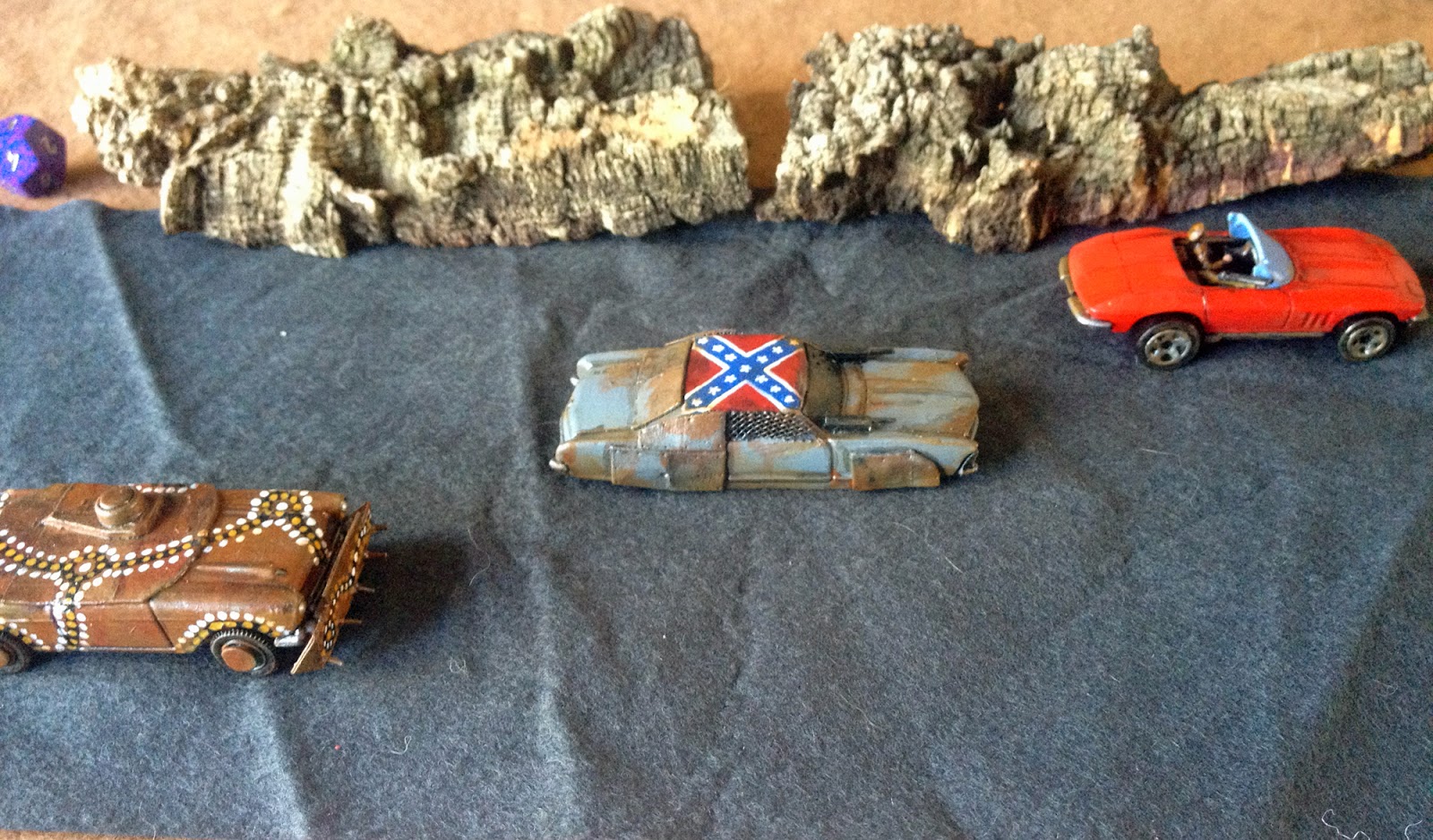 I saw an opening and moved to block the Grey MSV (this is a variant random event I am using at the moment - I have scrapped the bonus pass attempt you get on a '7'; now you can now choose to change one lane either to the left or right). 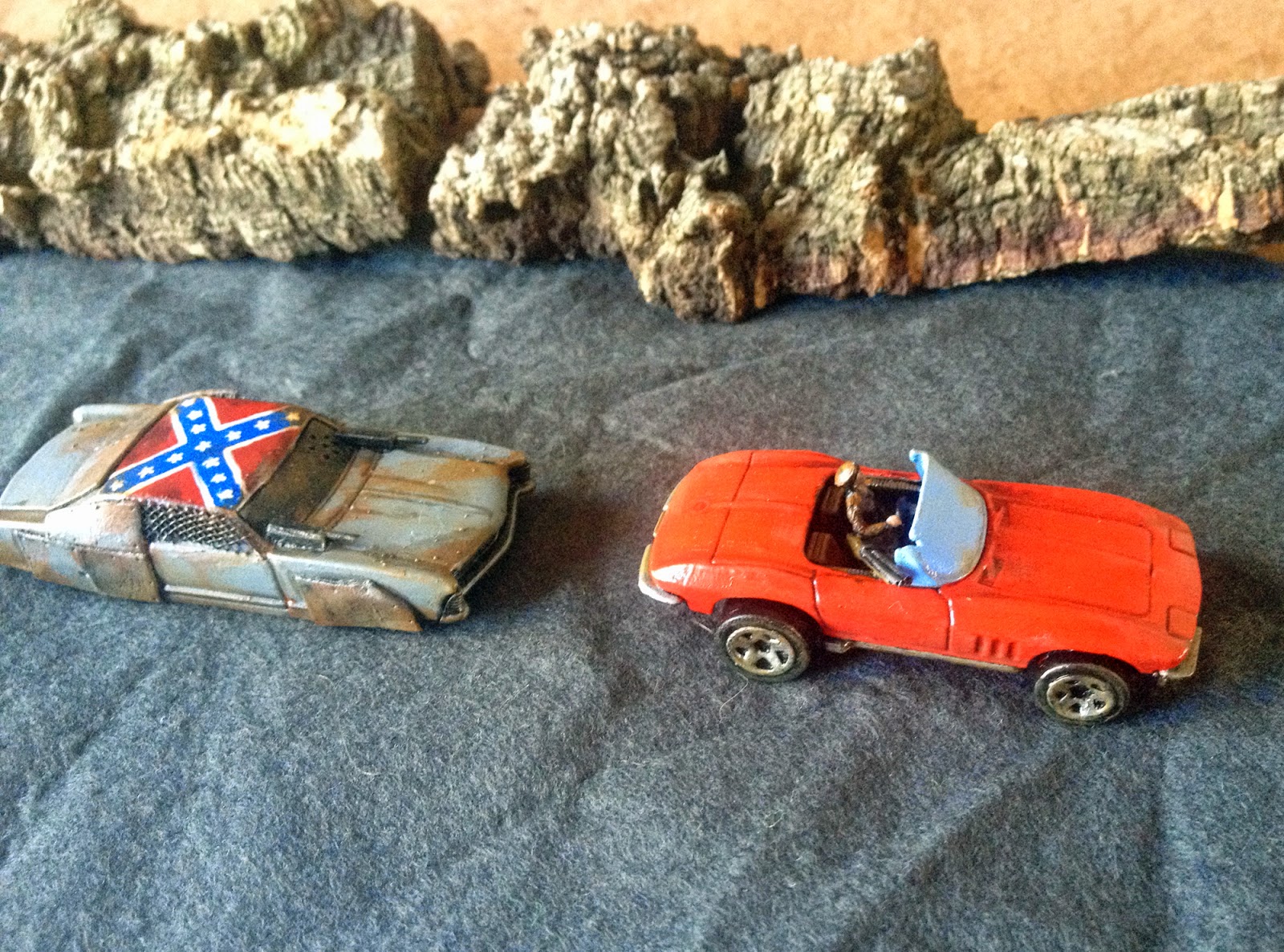 Unfortunately the MSV managed to move over as well, but in doing so nearly collided with the other one. 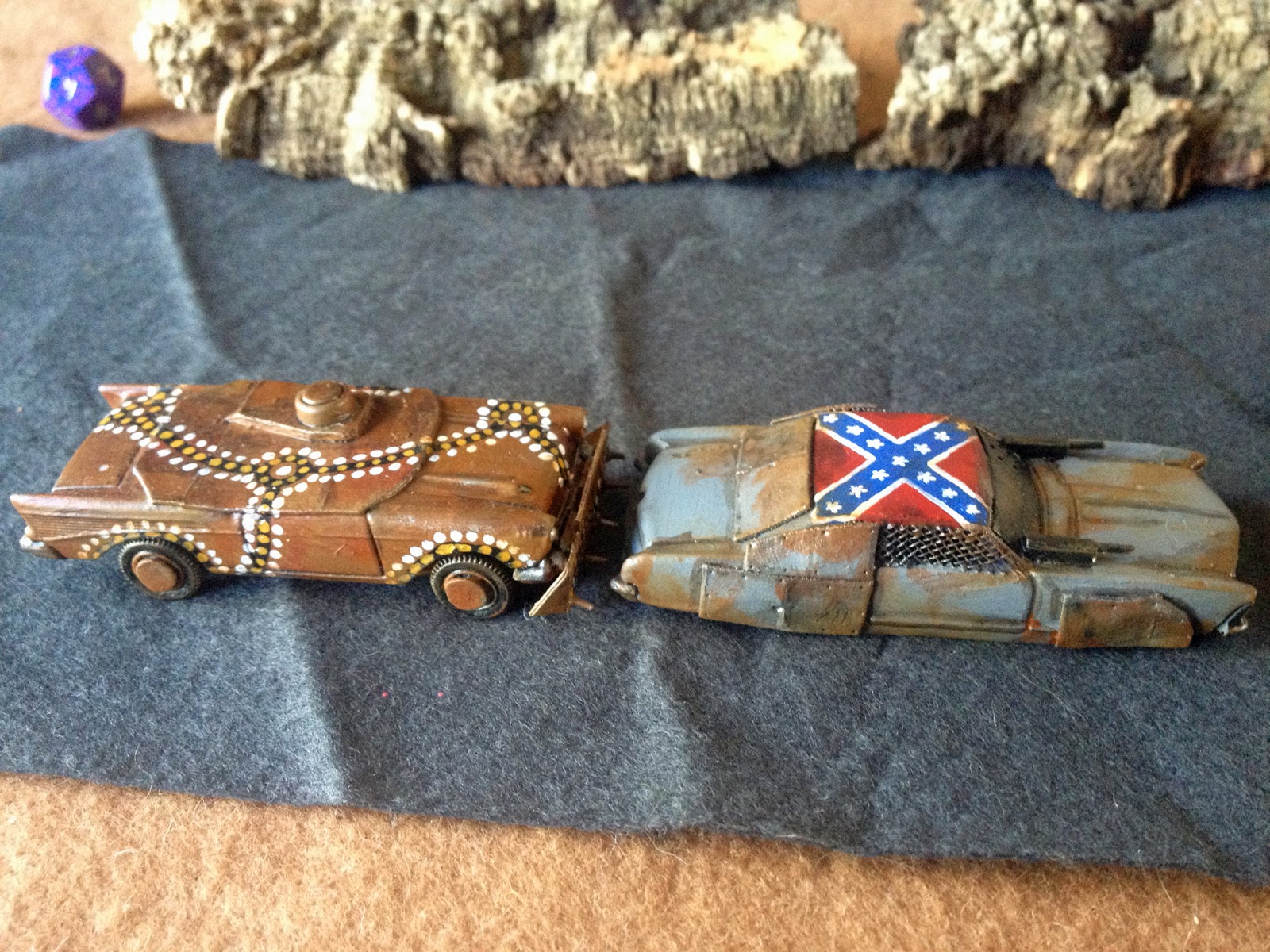 It zoomed into position, and ... 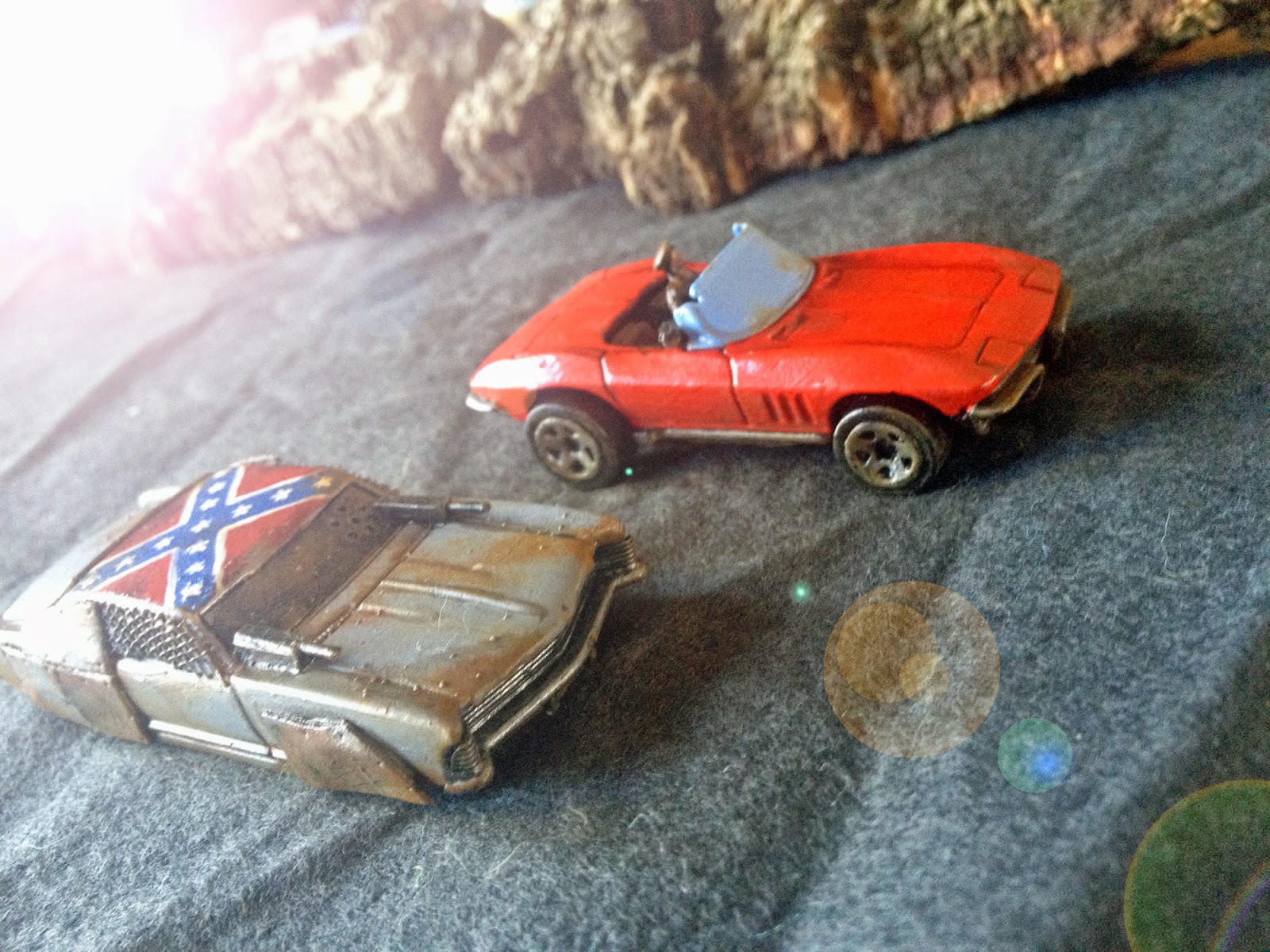 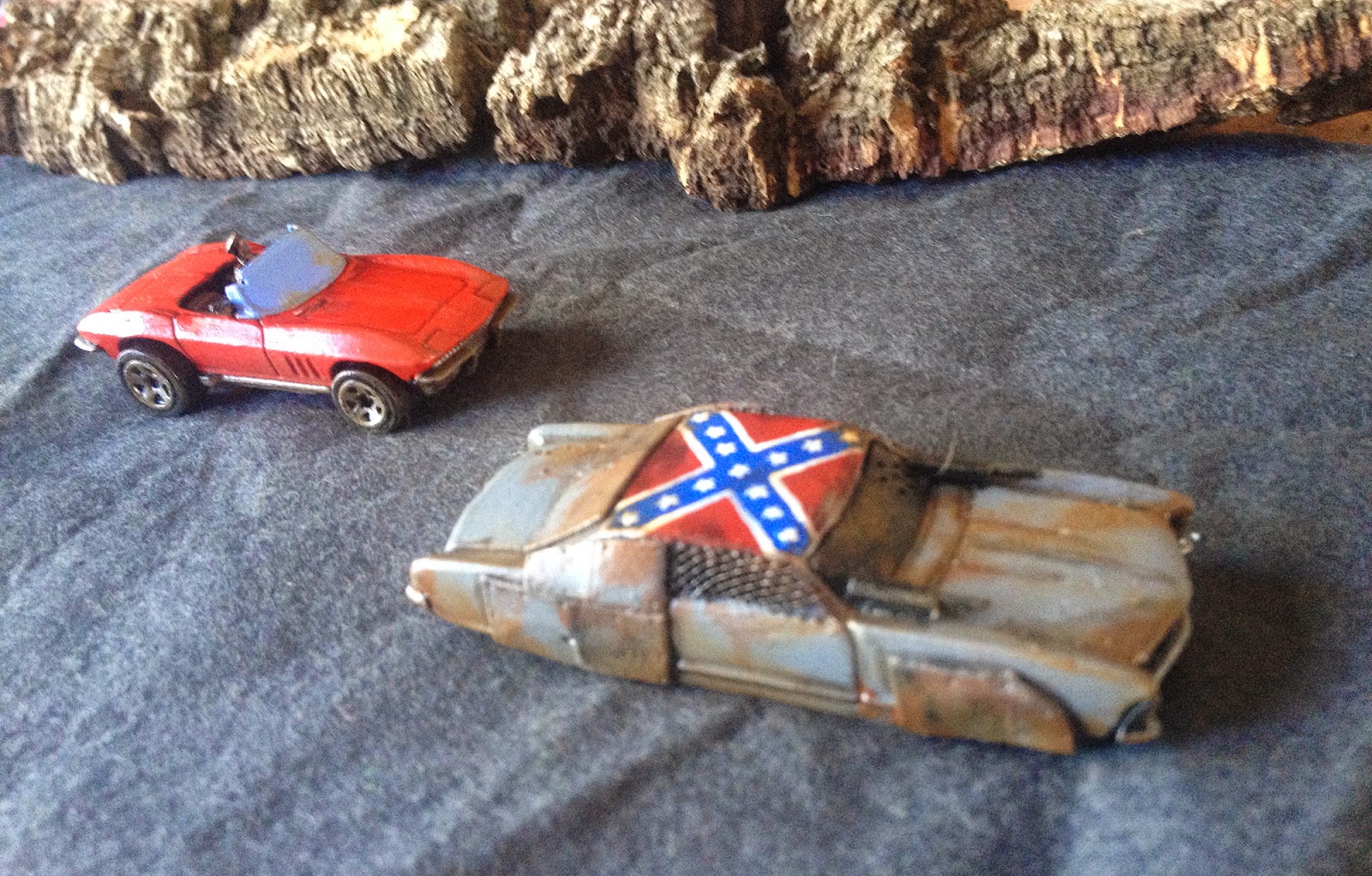 The Brown MSV also had a go, but I held him. 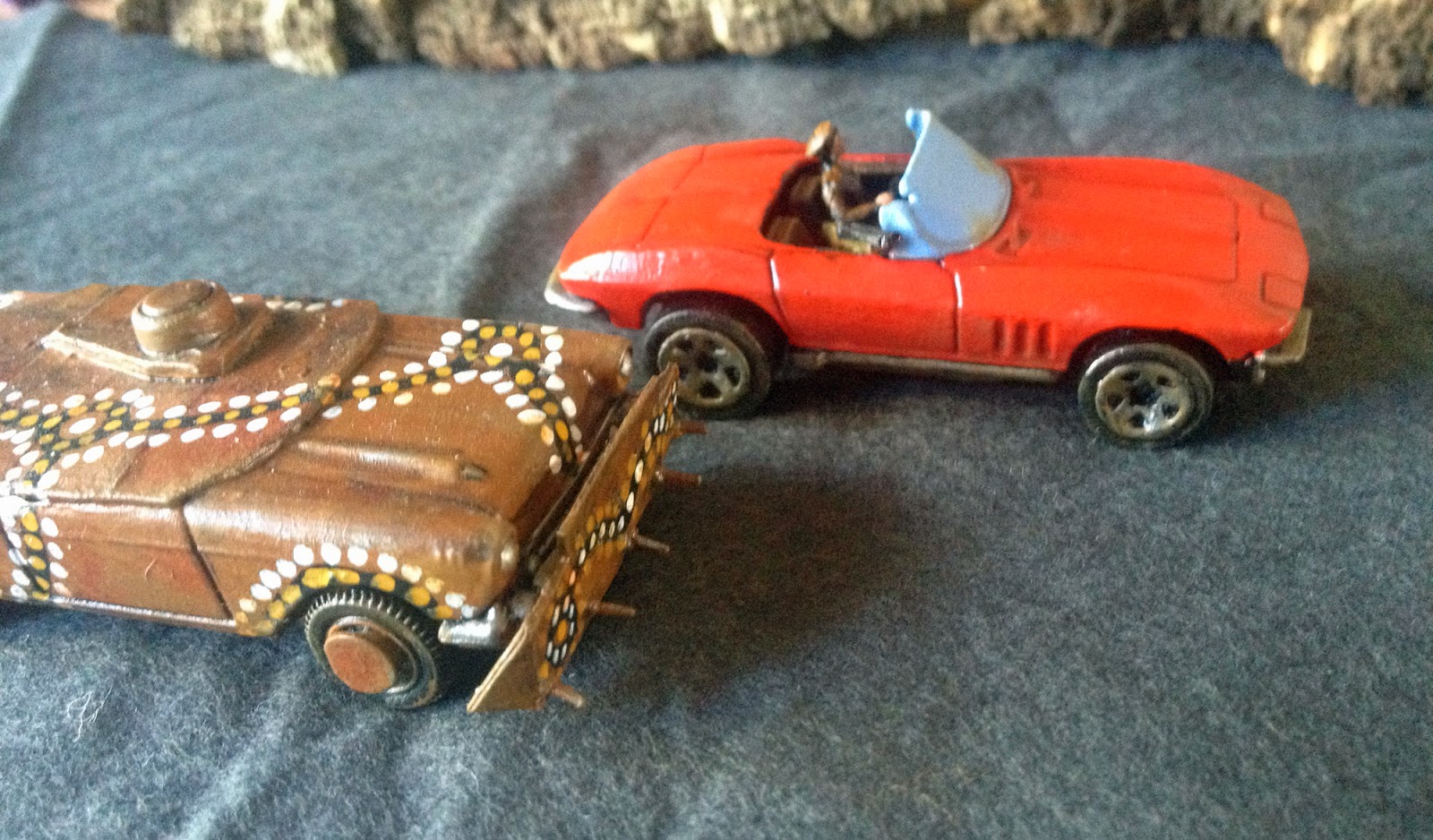 Section 2 was a straight. I drafted, and Brown tried a pass, but suffered a temporary brake lock and dropped back out o the running for this road section. 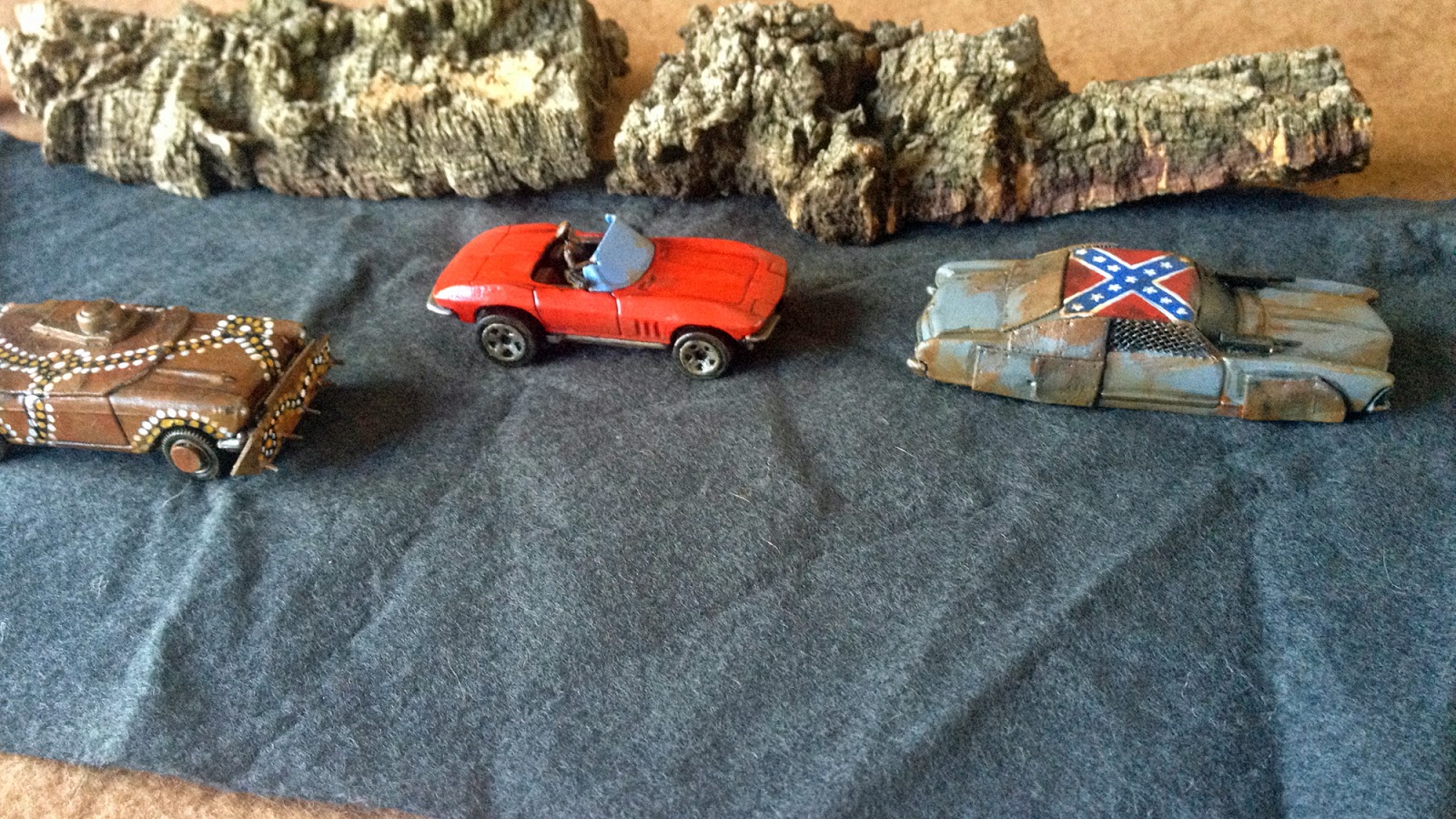 In Section 3 - a straight - I decided to draft the Grey MSV, and the Brown MSV moved in behind me as well. 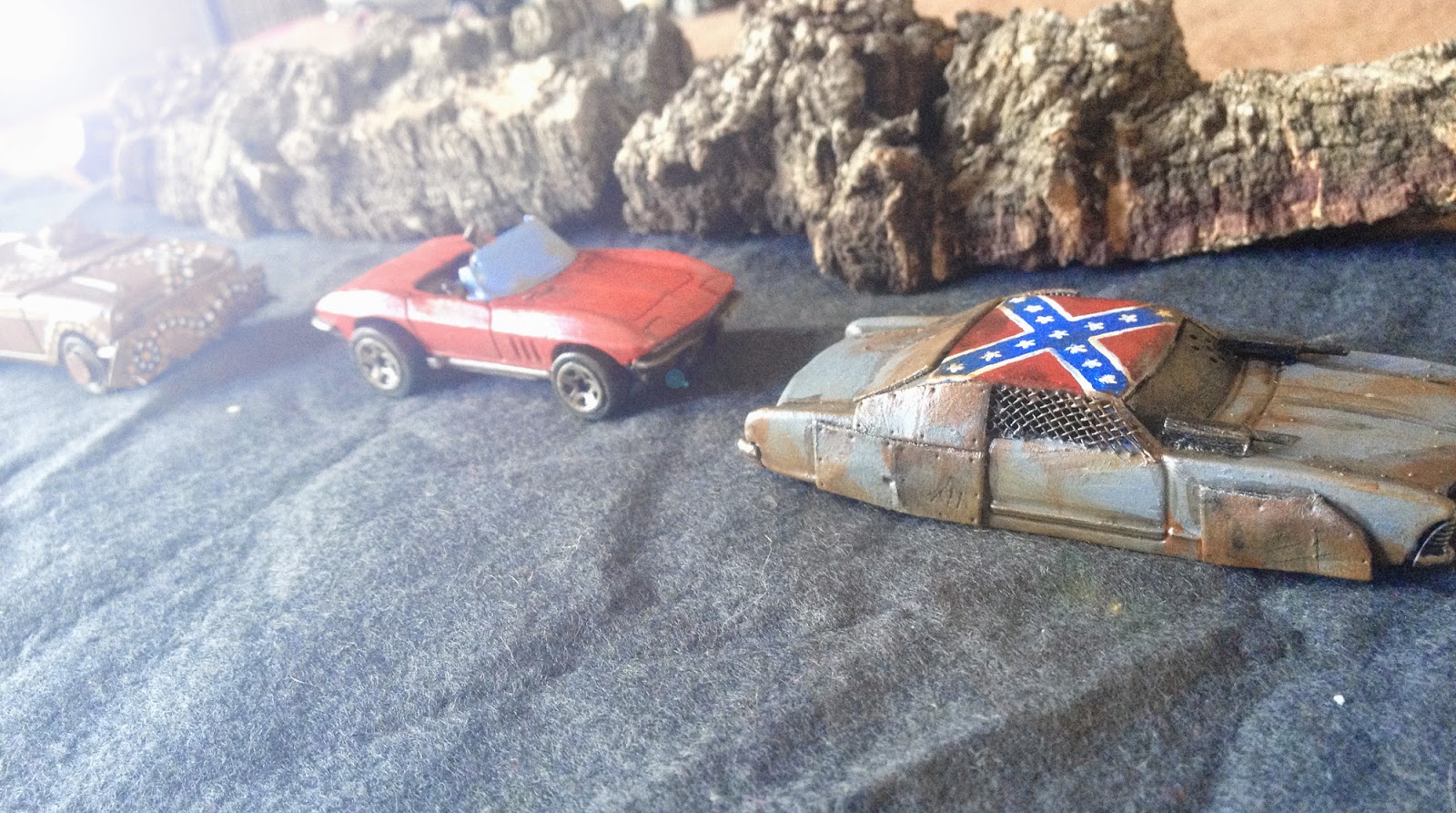 But, again, the random events gave me an opening, and I took it. 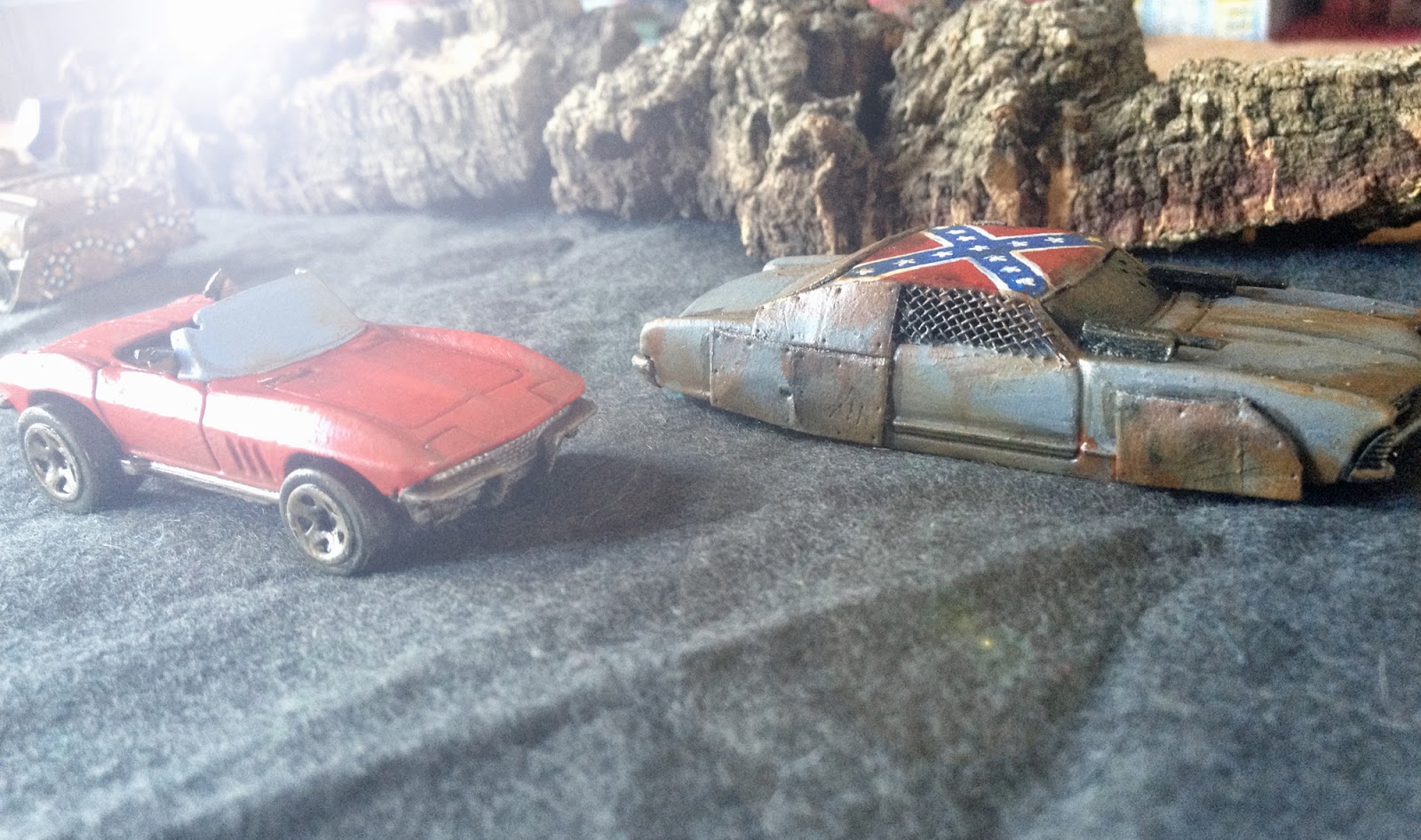 Foot hard down on the accelerator I pulled ahead of the Grey MSV. 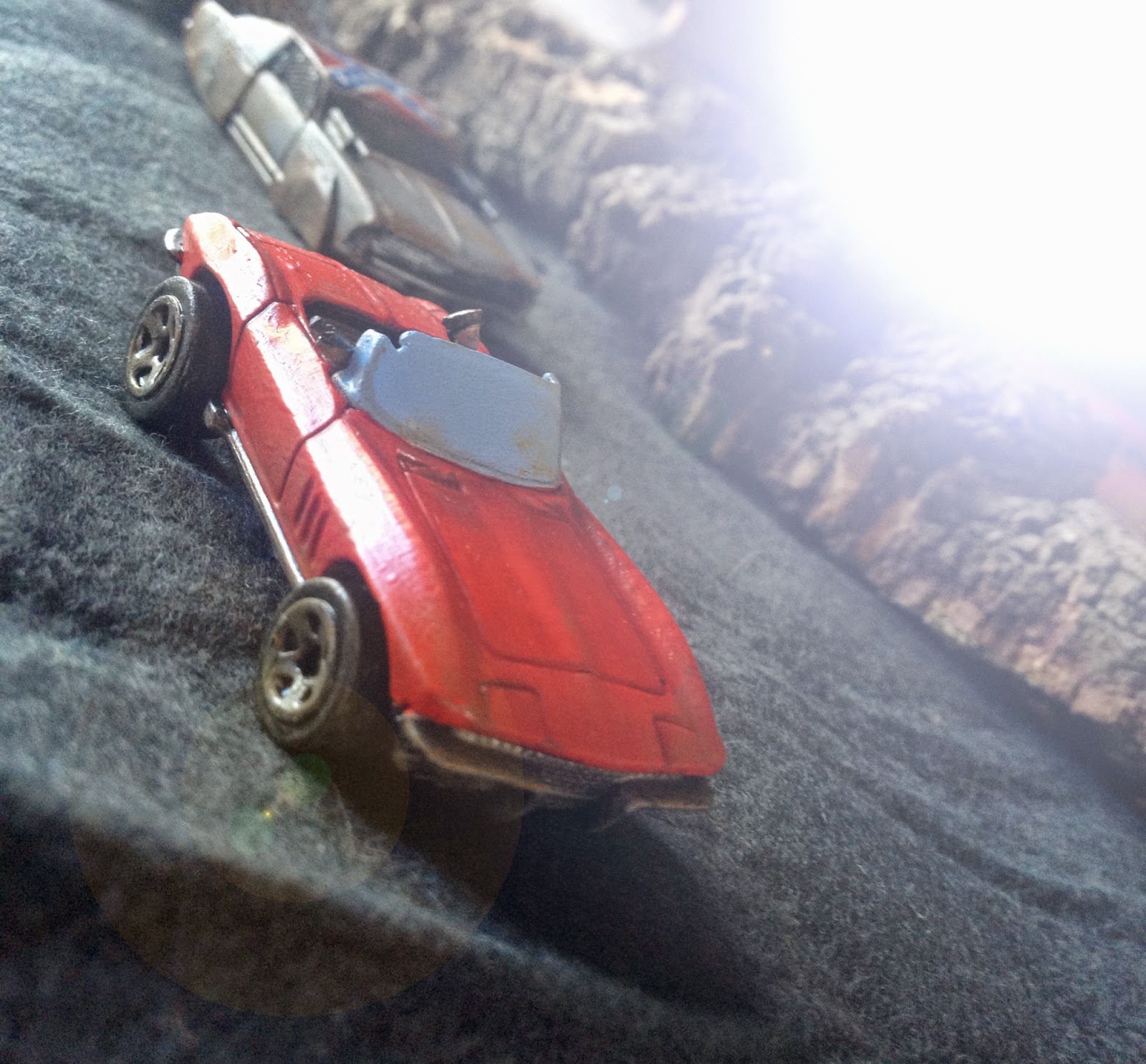 Section 4 was also a straight. Both MSVs moved to make a wide pass ... 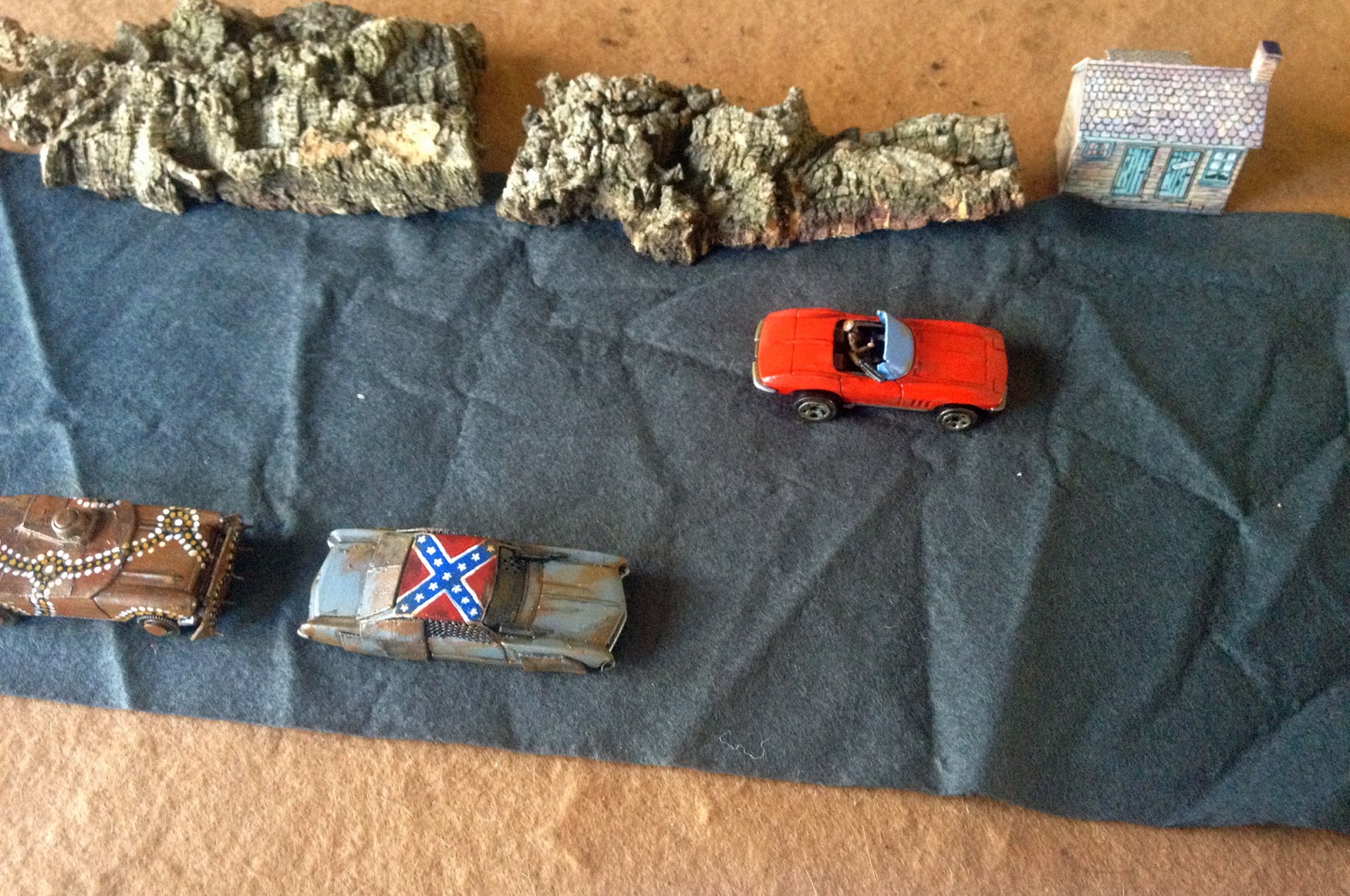 ... and almost collided again. They failed to overtake me. 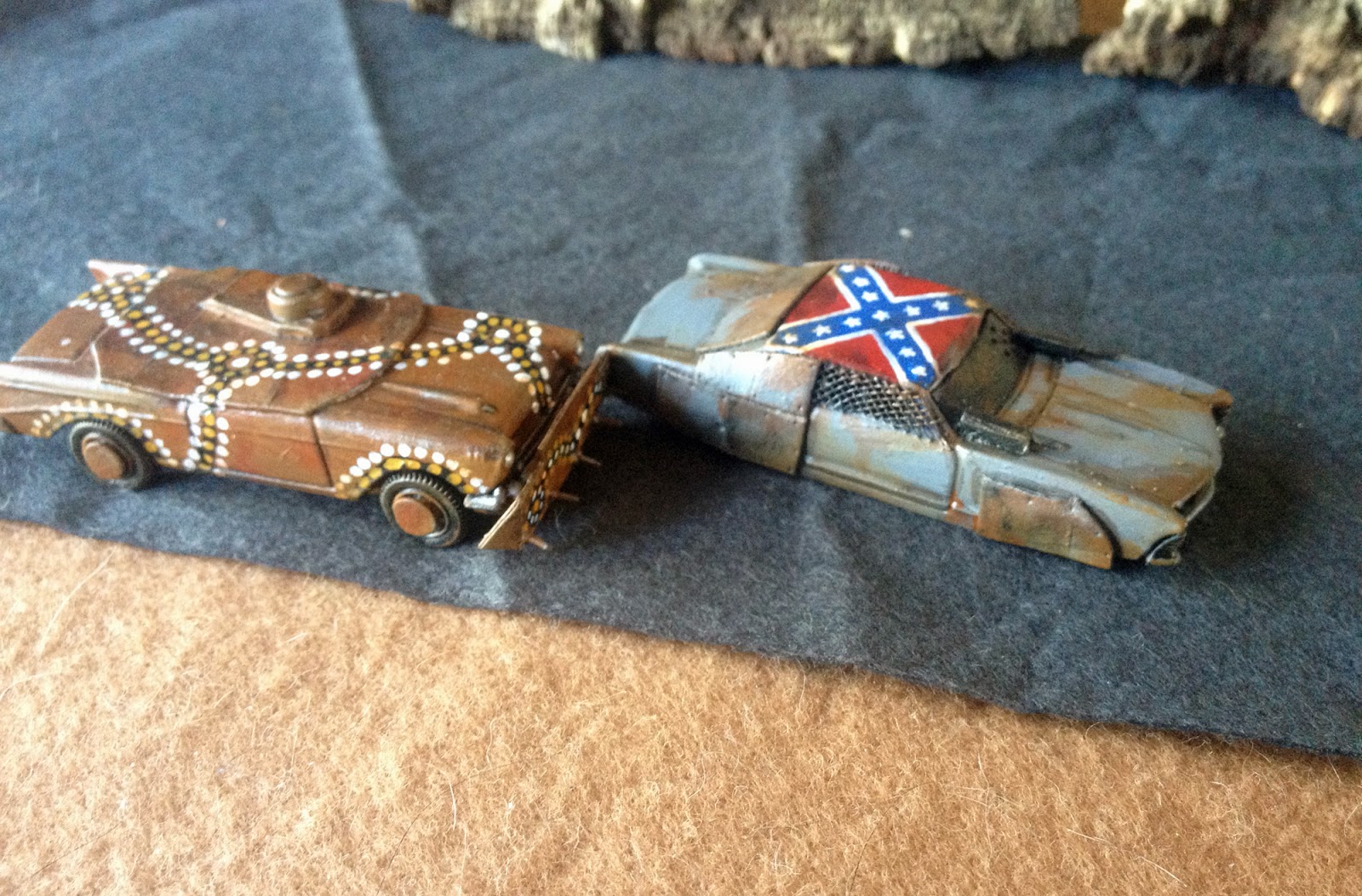 We swept into a long curve in Section 5. I suffered issues with my brakes, and nearly collided with the Grey MSV behind me. 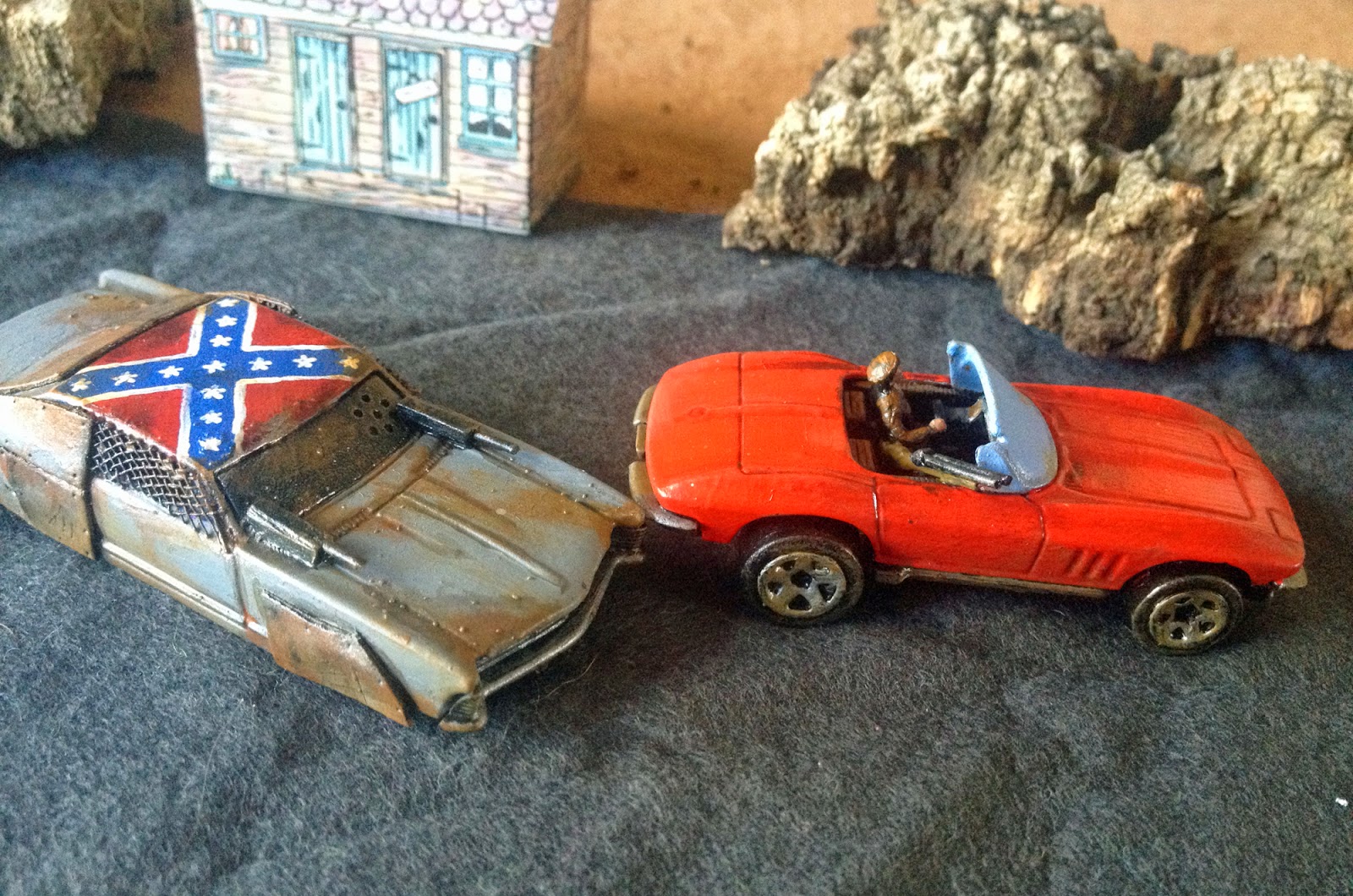 The Brown MSV made an attempt to head me off ... 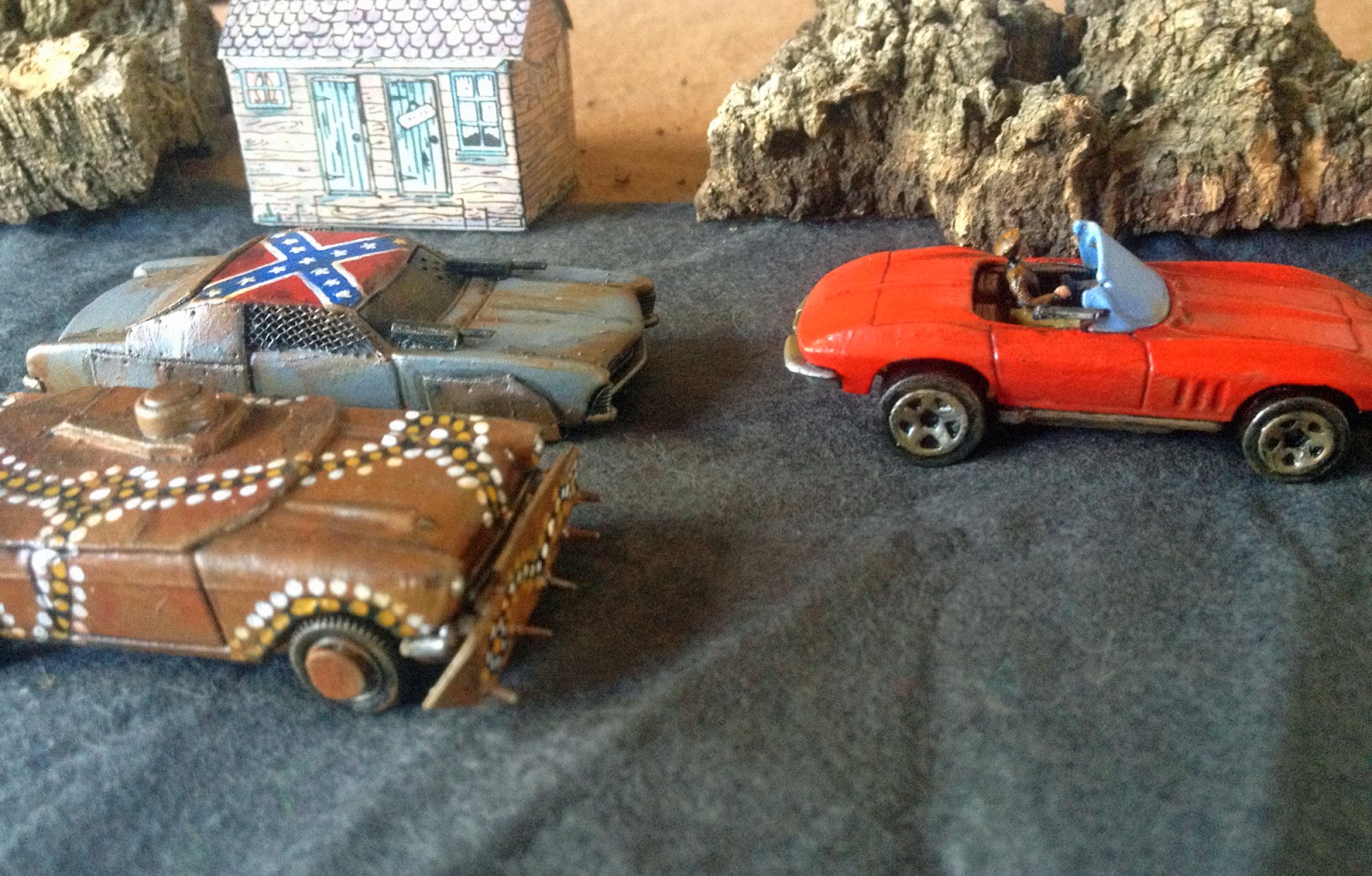 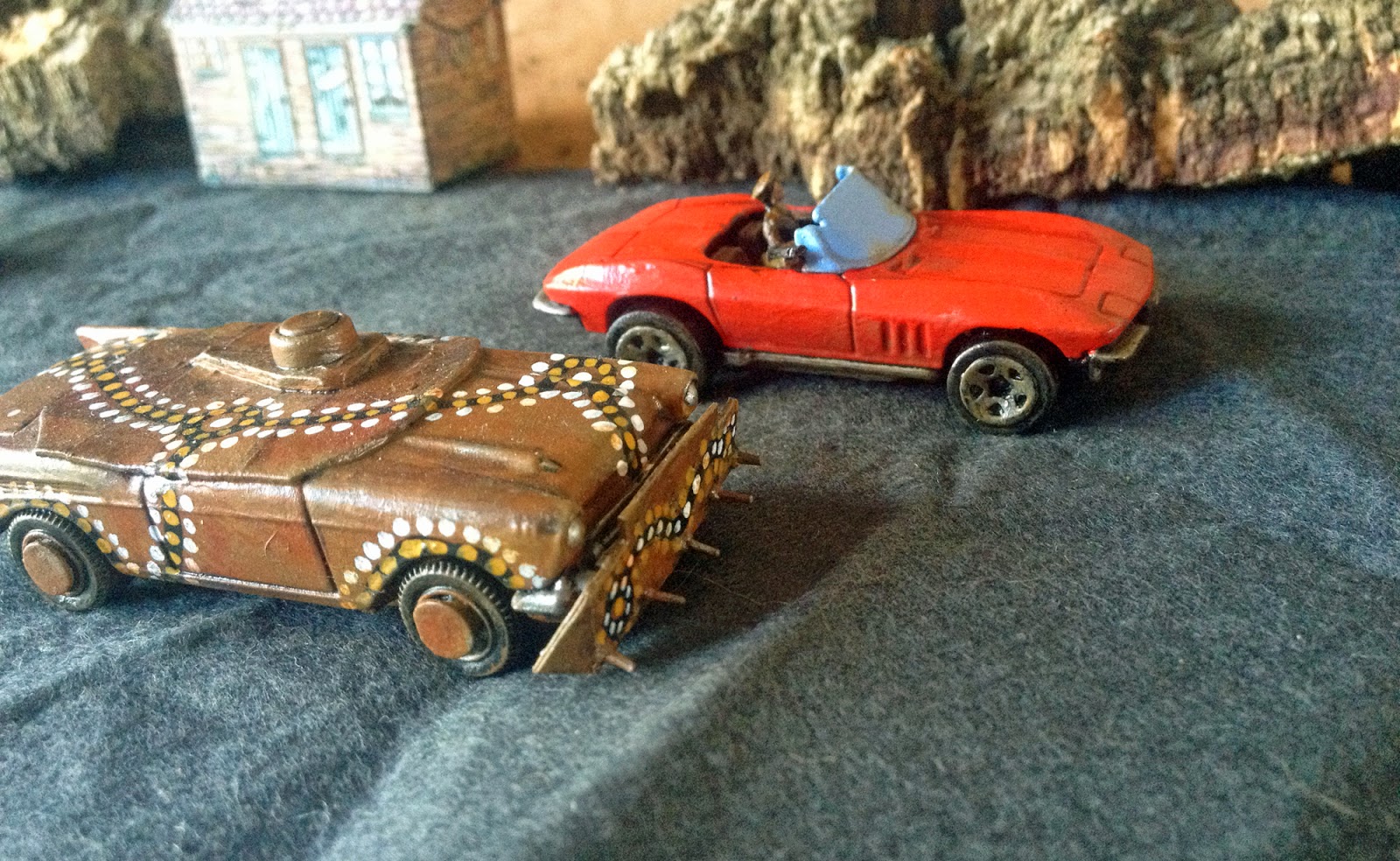 Sections 6 and 7 were also curves, and both MSVs made desperate attempts to pass me, but I kept my nerve and held them off again and again. 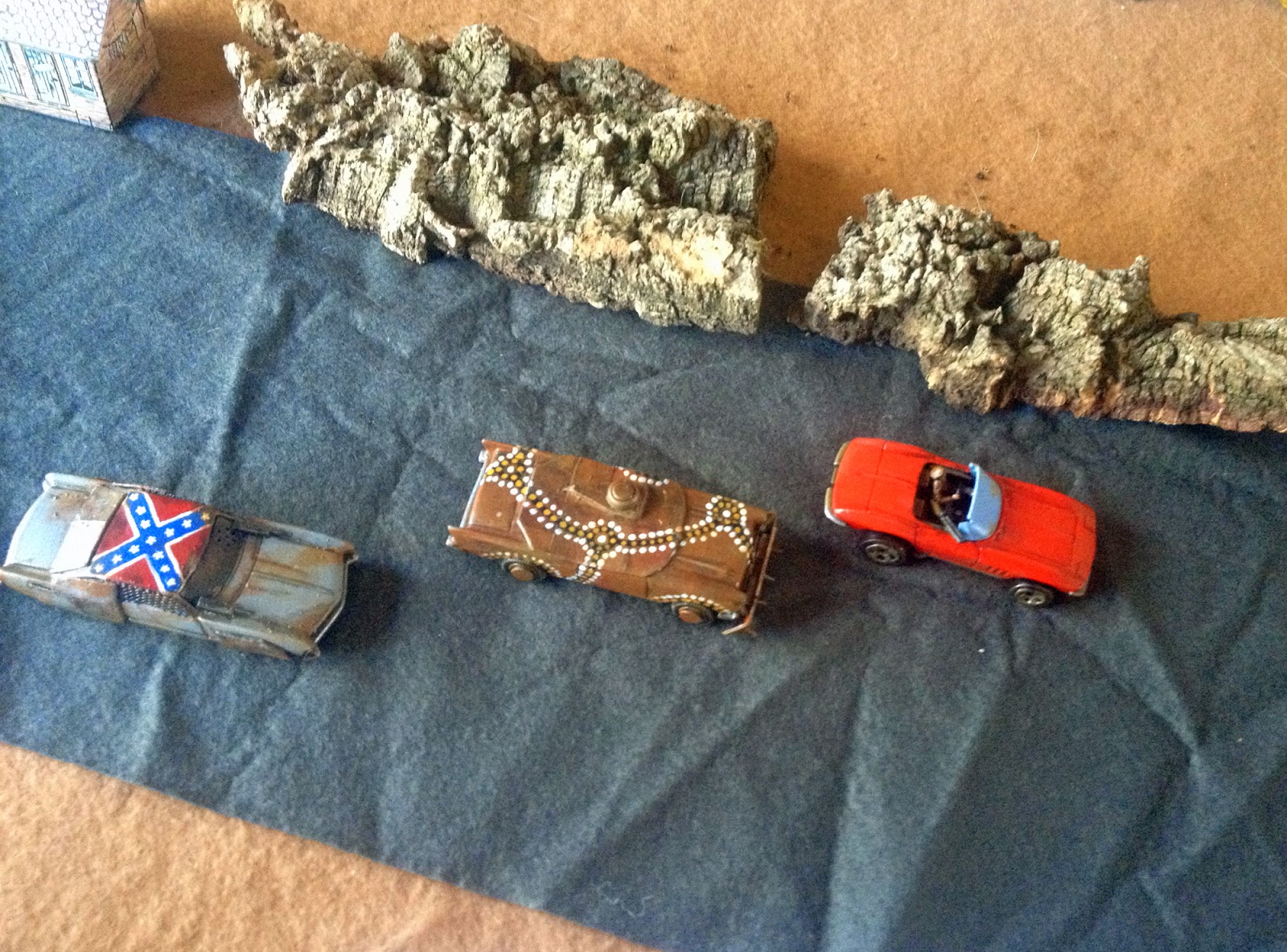 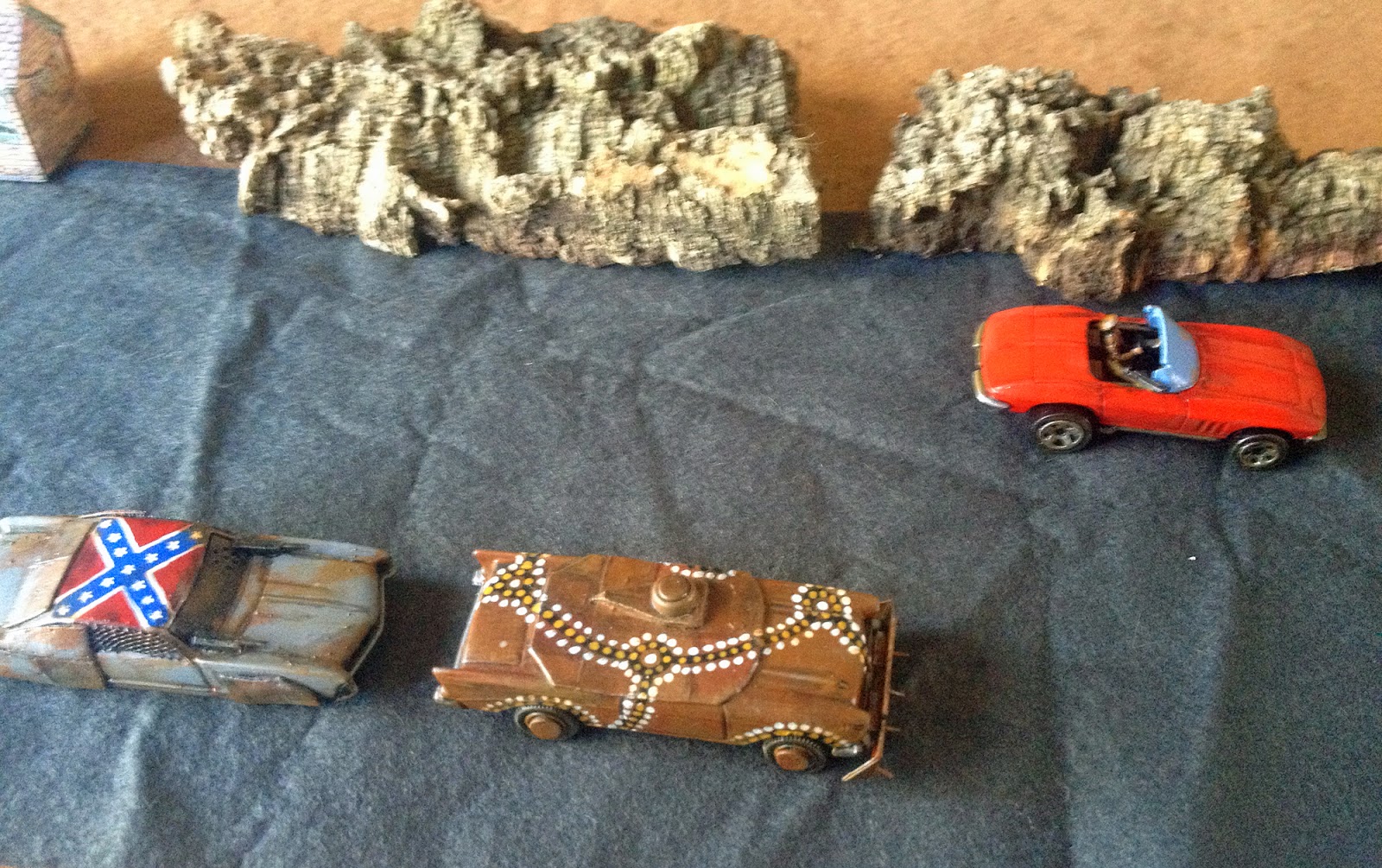 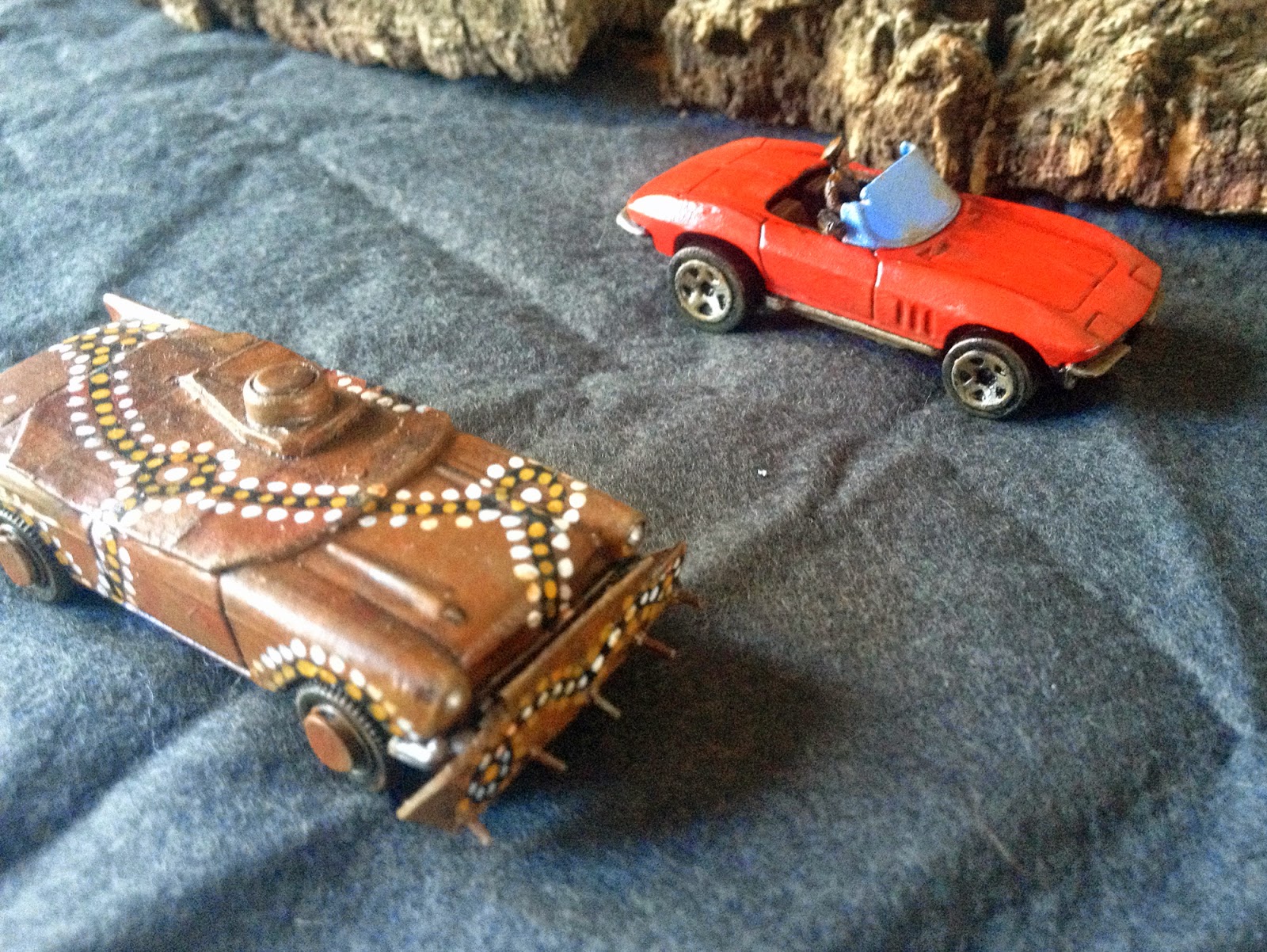 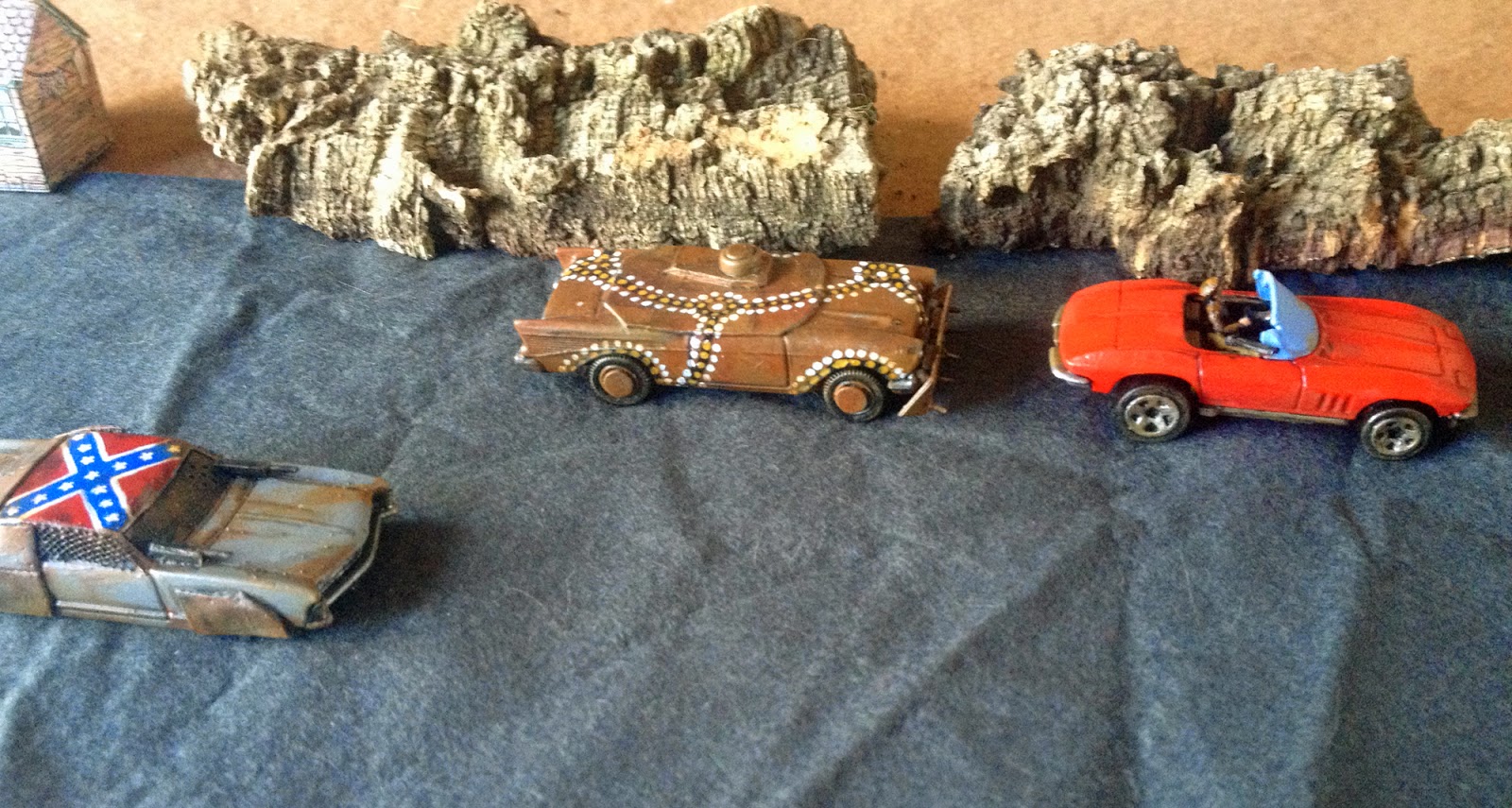 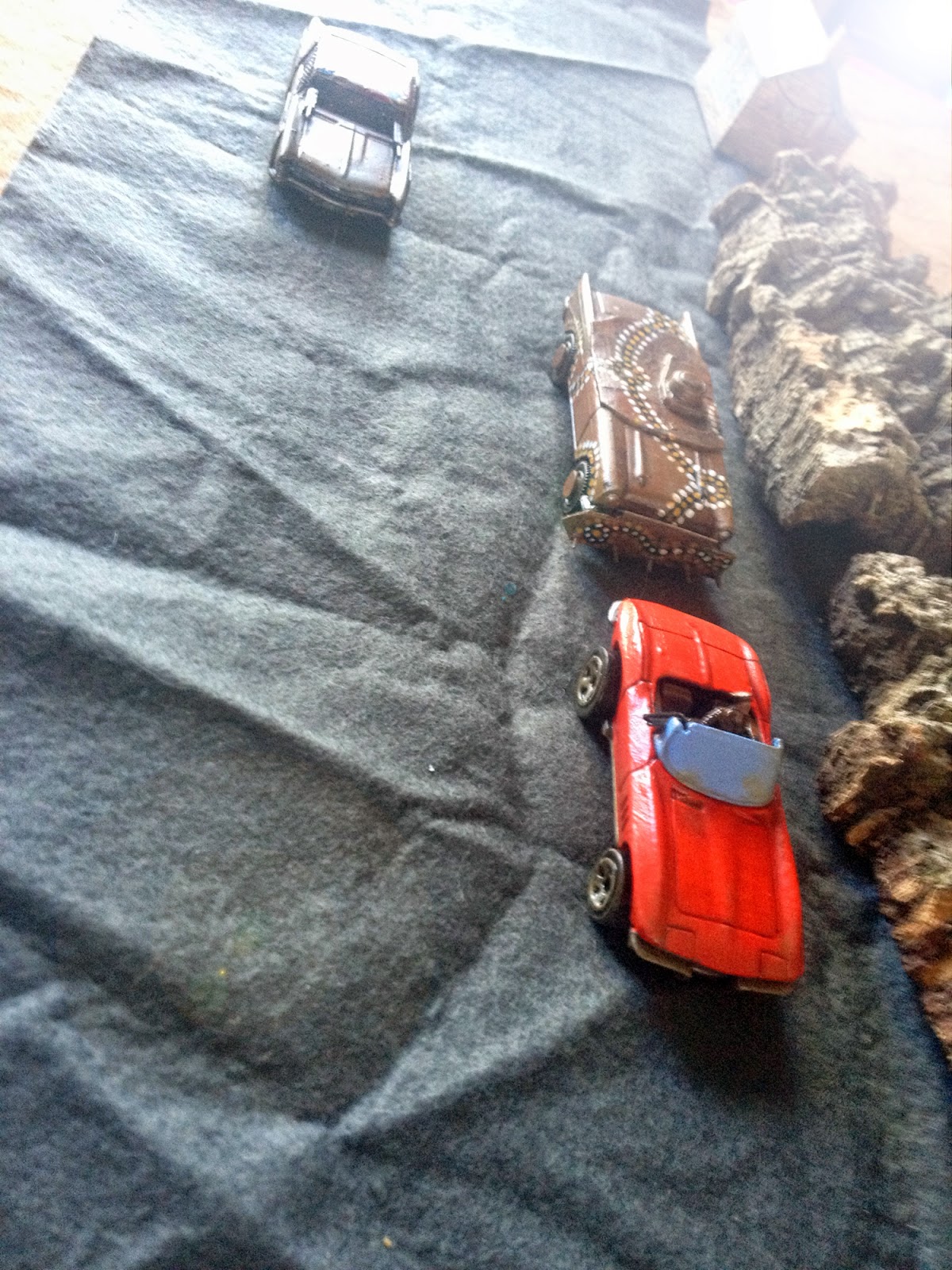 Section 8, and Grey makes a wide pass. Once again I see him off and ... 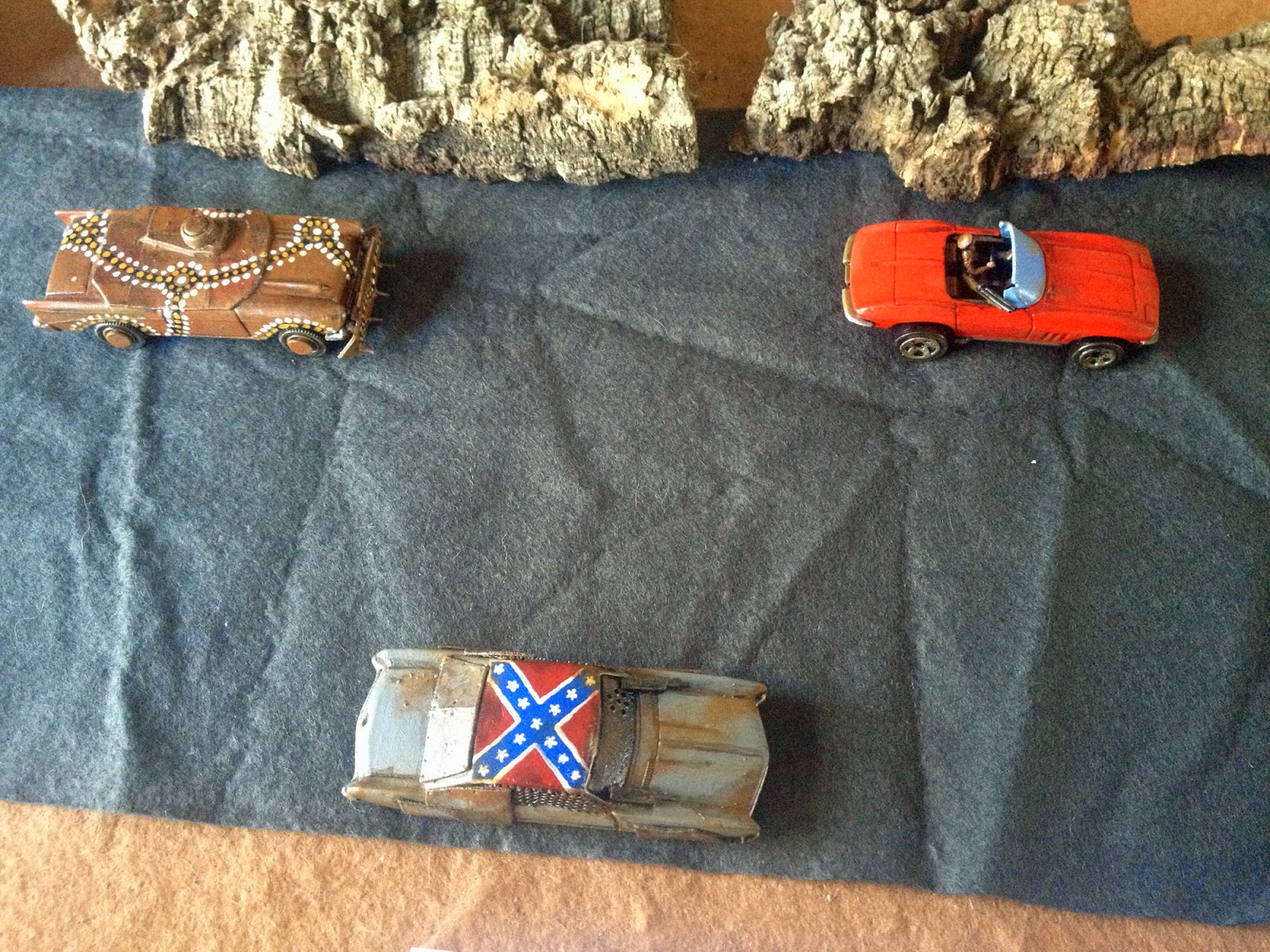 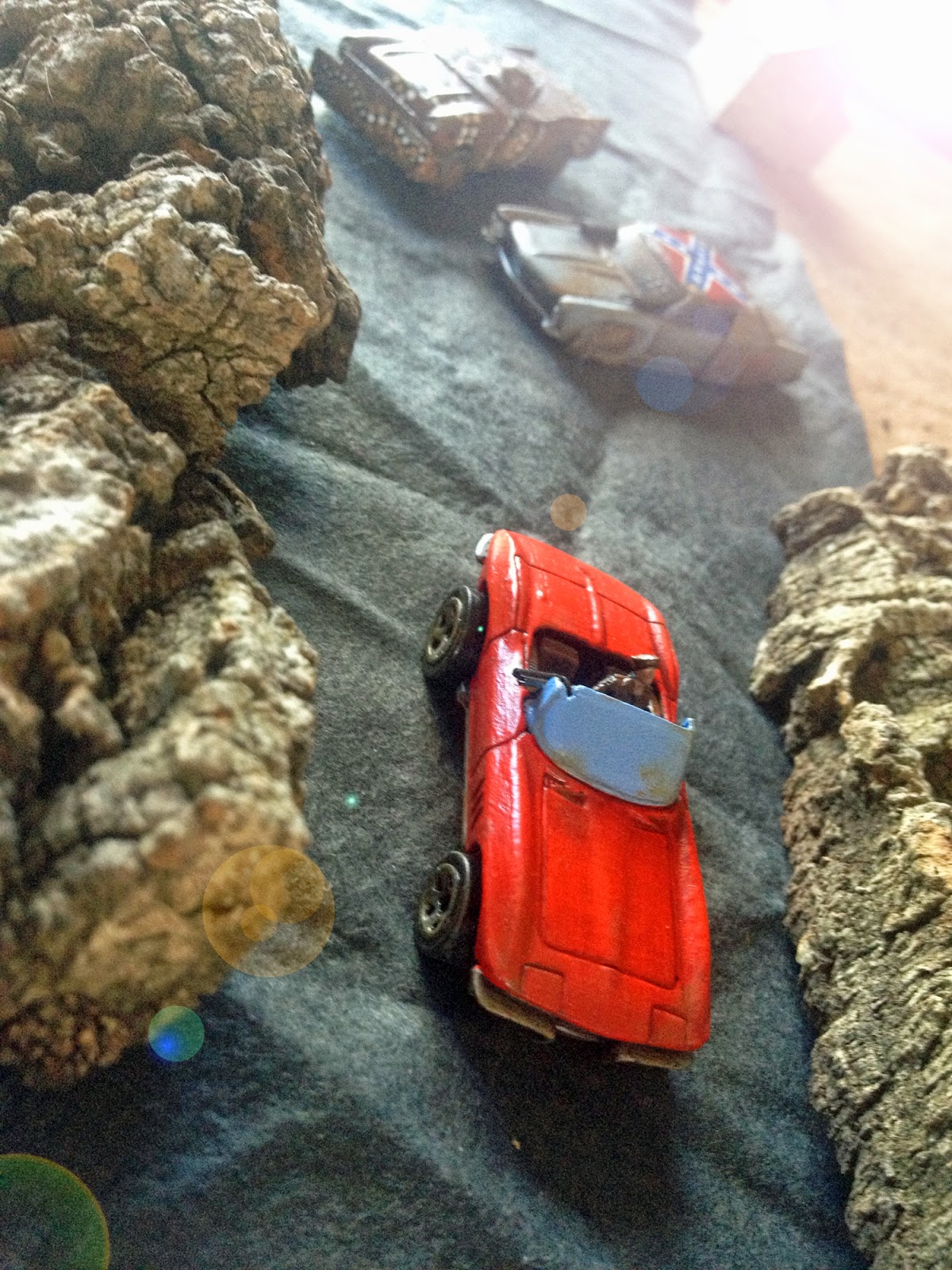 The scenario was fun to run, but probably a little unbalanced in favour of the Red Barchetta. I possibly need to up the quality of the MSVs to make them more dangerous; whilst the Red Barchetta is weak in a bash situation, the MSVs never really got the chance to line one up because I was too quick and agile for them.

Still, it was great to bring one of my favourite songs to life.
Posted by Kaptain Kobold at 06:45