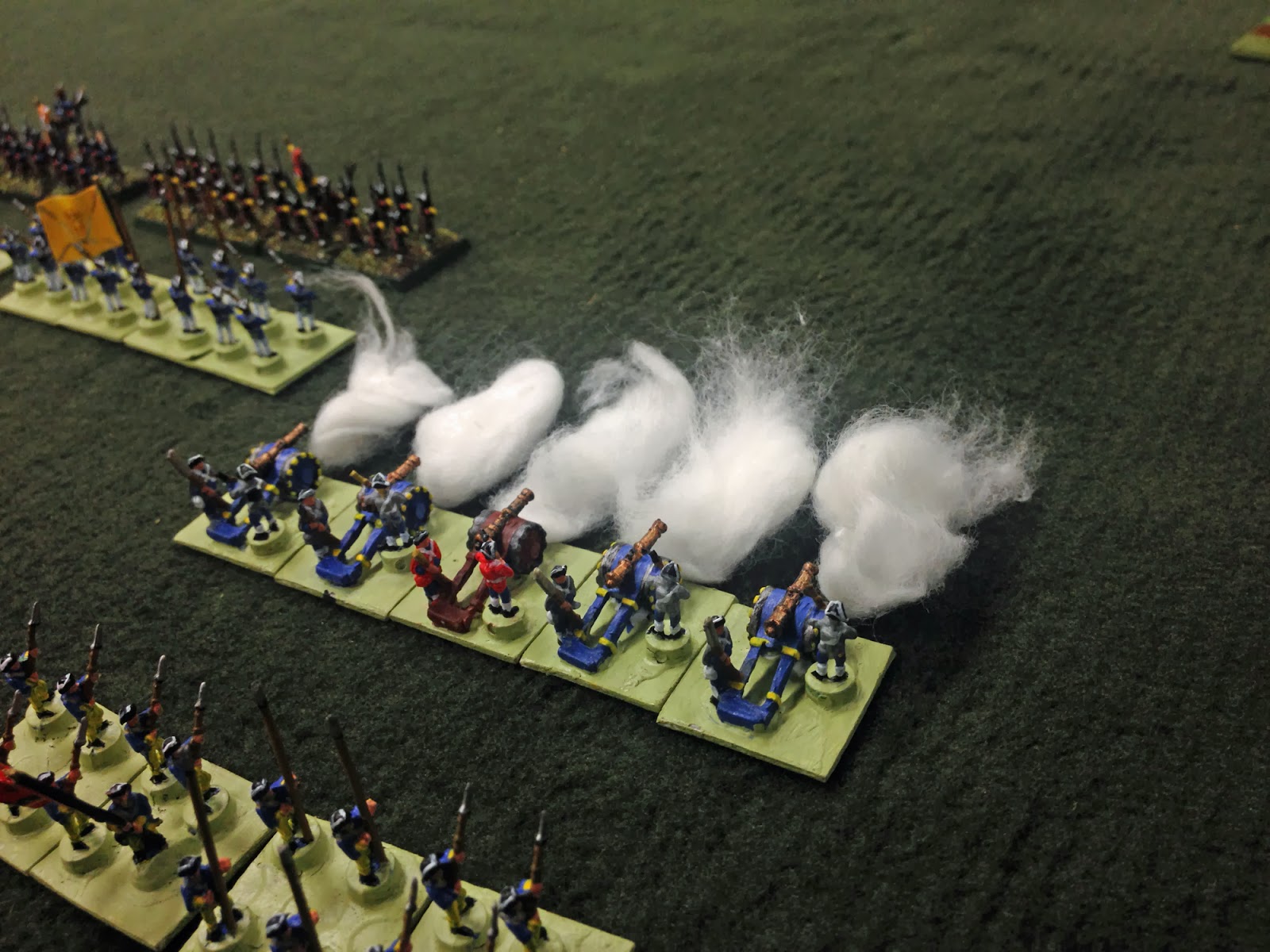 Having spent the last couple of weeks painting my Risk figures to look like Great Northern War Swedes for 'Maurice', I got a chance to use them tonight - as Anglo-Scottish-Dutch-Danish troops in our refight of Ramillies.

Ralph played the Franco-Bavarians. He stacked his infantry on his right, garrisoning  the two towns in his centre with elite units. His cavalry were on the left; I would have to cross the stream to get to them. I put my cavalry opposite his, and did the same with my infantry. I decided to bypass one garrisoned town altogether, and face the other with my artillery. Here are the armies deployed for battle: 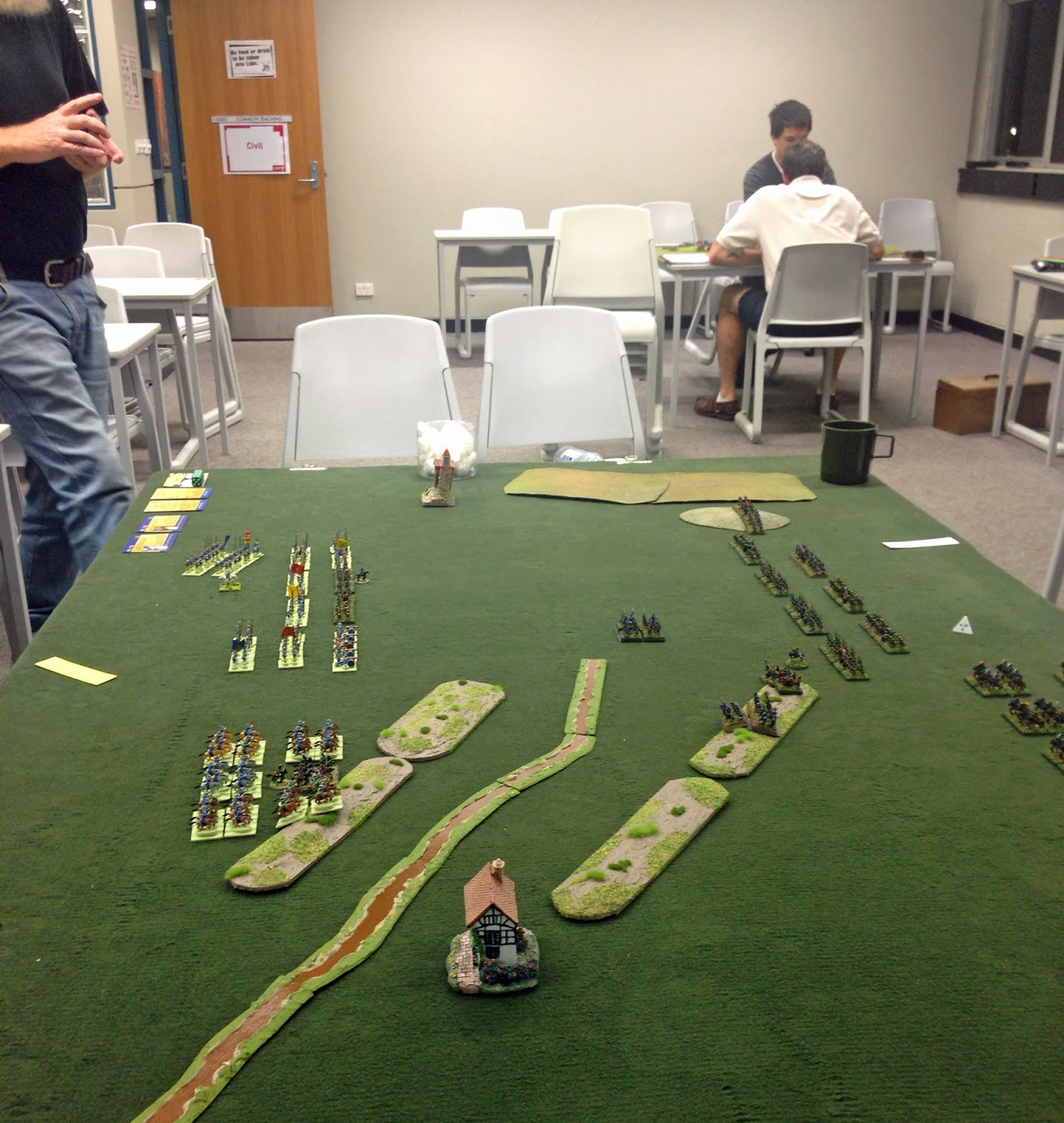 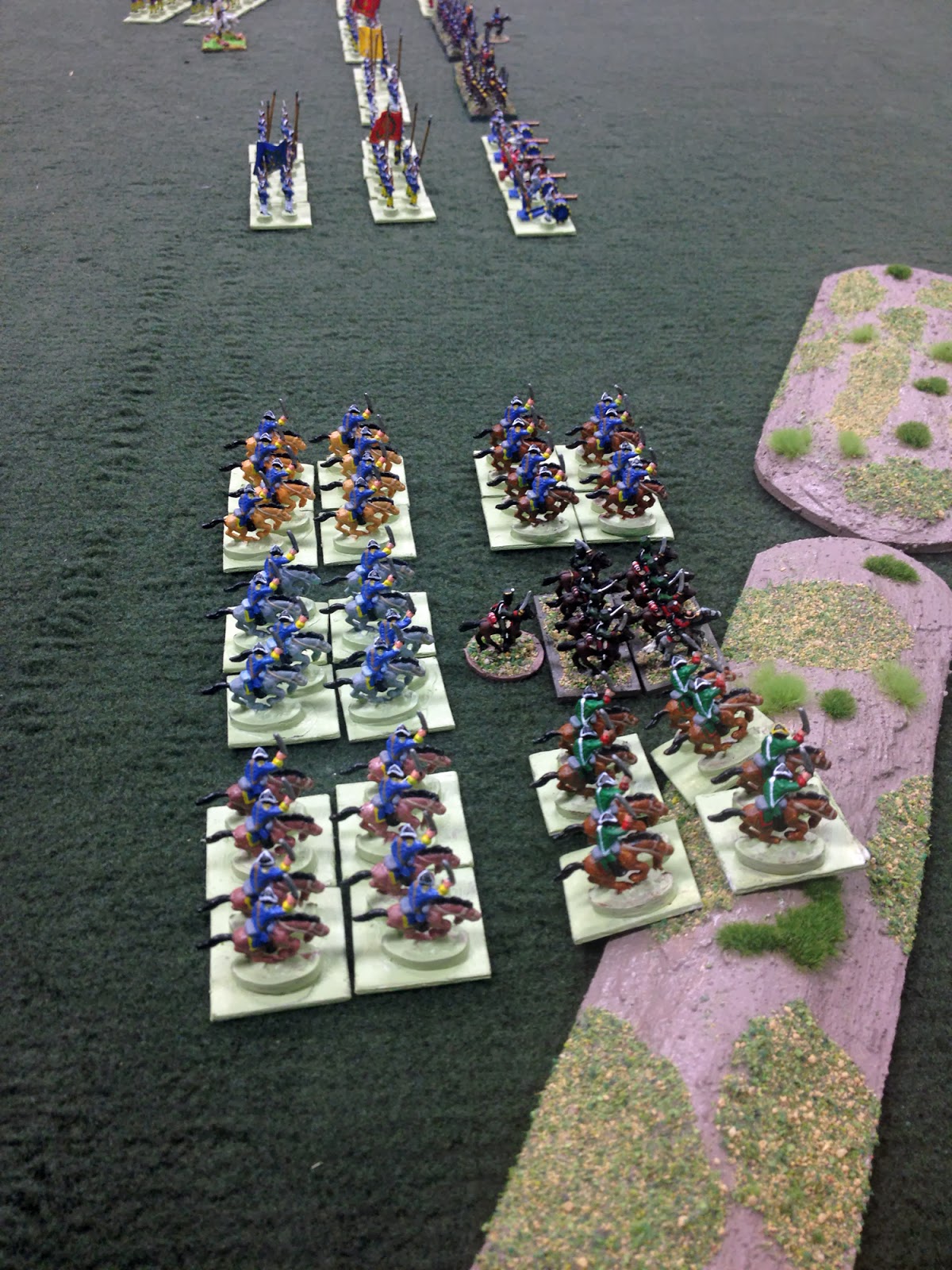 And my infantry. Charles XII stood in for the Duke of Malborough in this game. 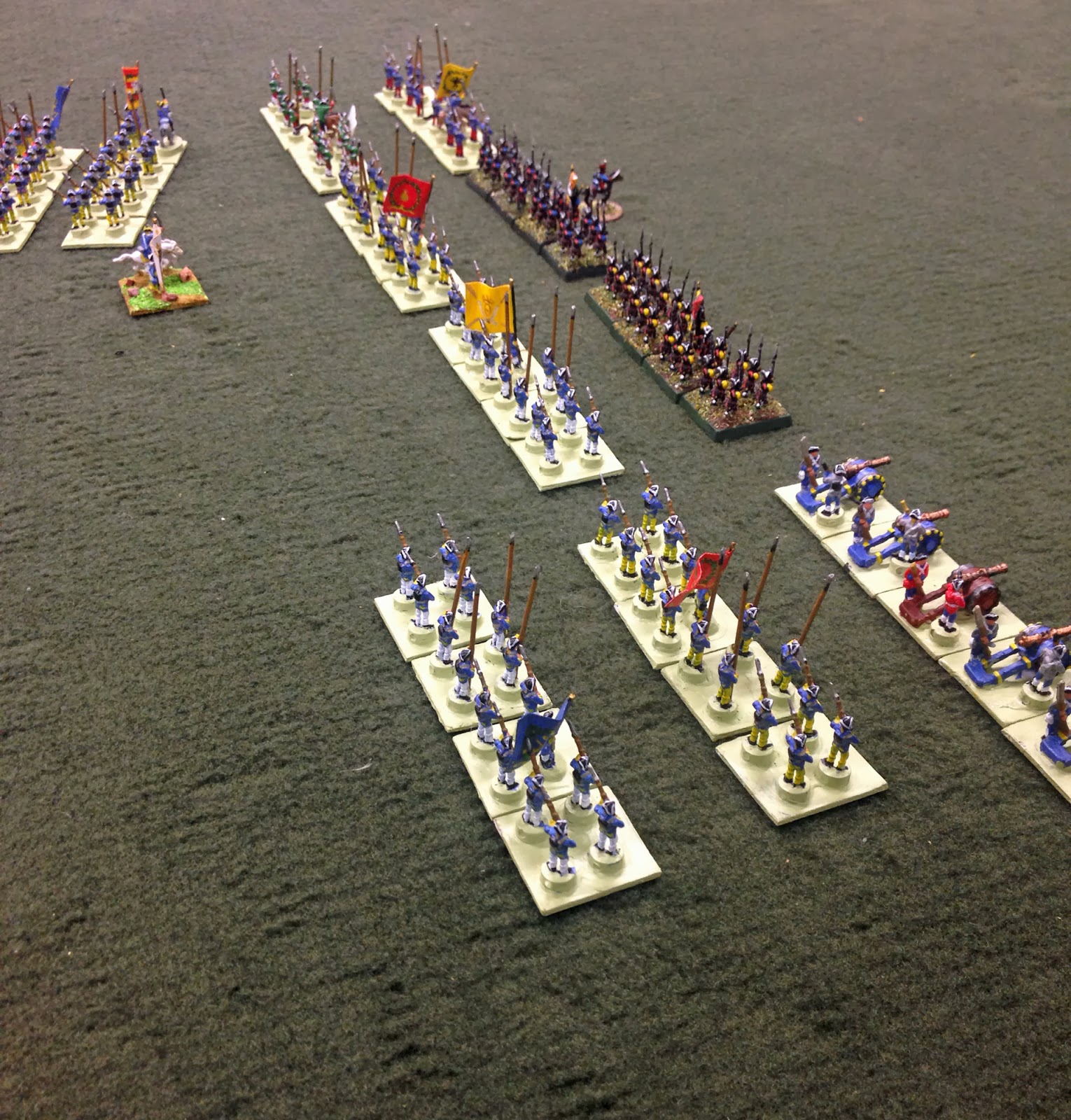 The Franco-Bavarian garrisons, with the infantry line beyond them. 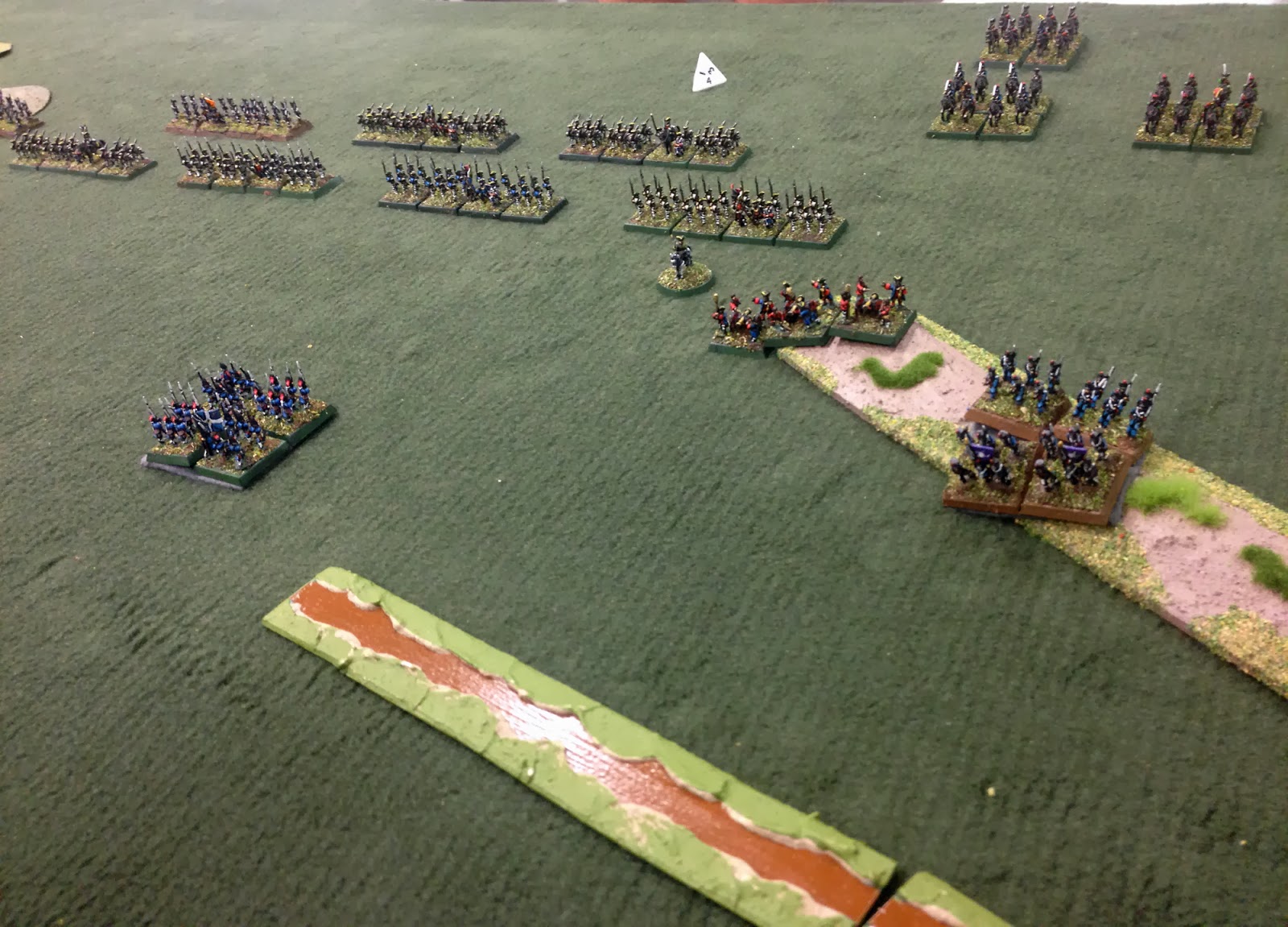 The Franco-Bavarian cavalry. I still have some painting to do; those units will soon become Great Northern War Russians. 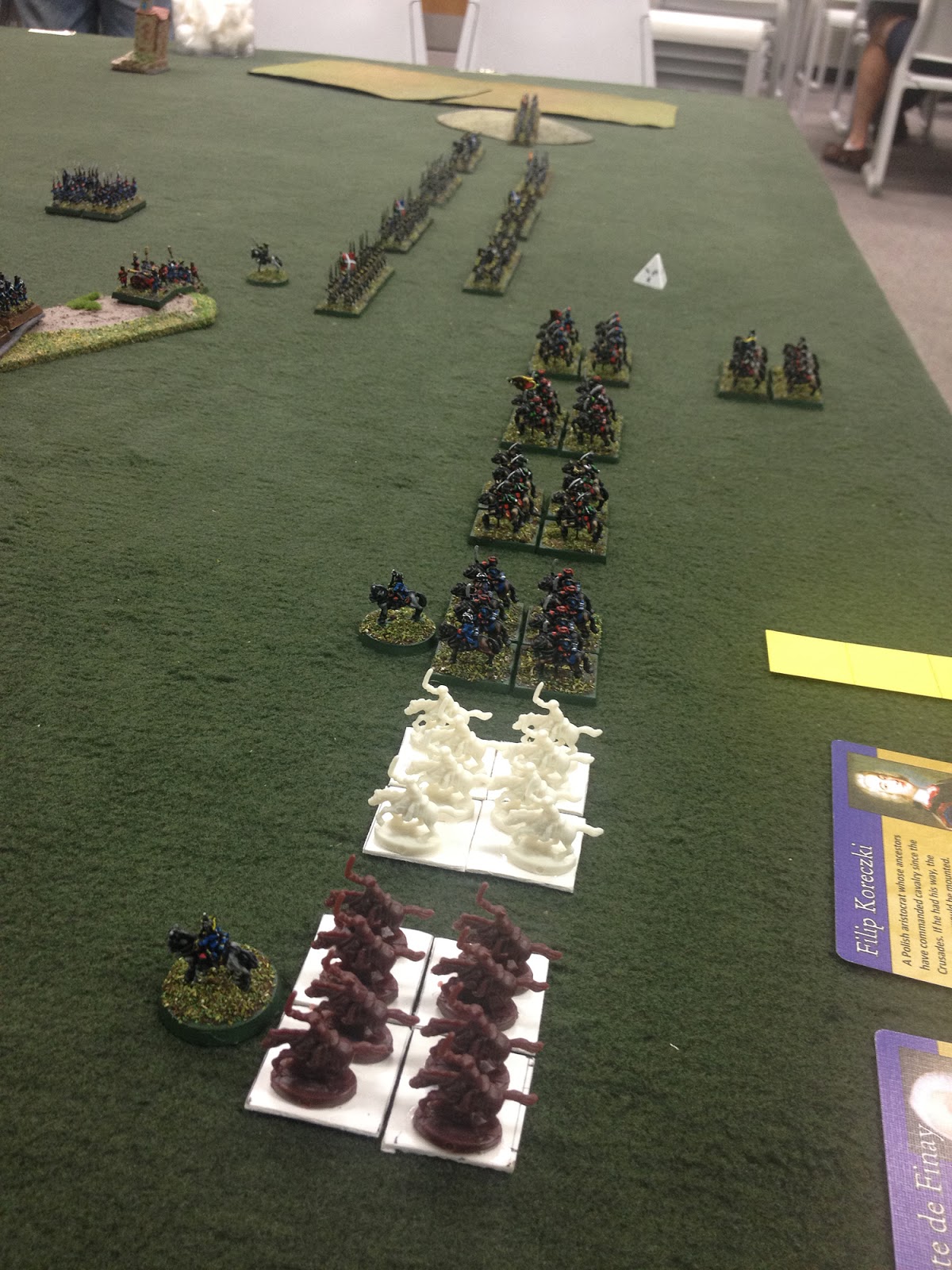 I had a plan of sorts. I aimed to push the cavalry forward towards the stream, then advance my infantry to within striking distance of their enemy opposite numbers and then, once the firefight had started - a firefight in which I had an edge - lead my cavalry against that of the enemy, forcing Ralph to choose between fighting my cavalry, or rallying off the hits being caused by my superior firing. I aimed to bypass the fortified town; being forward of the Franco-Bavarian line I reasoned that I could move quickly past them and get to grips with the main enemy force without them causing me any real trouble.

I have no real idea if it worked; it went wrong from the start when I pushed my cavalry forward too far. By the stream they came under enemy artillery fire, so I crossed the stream to avoid it. 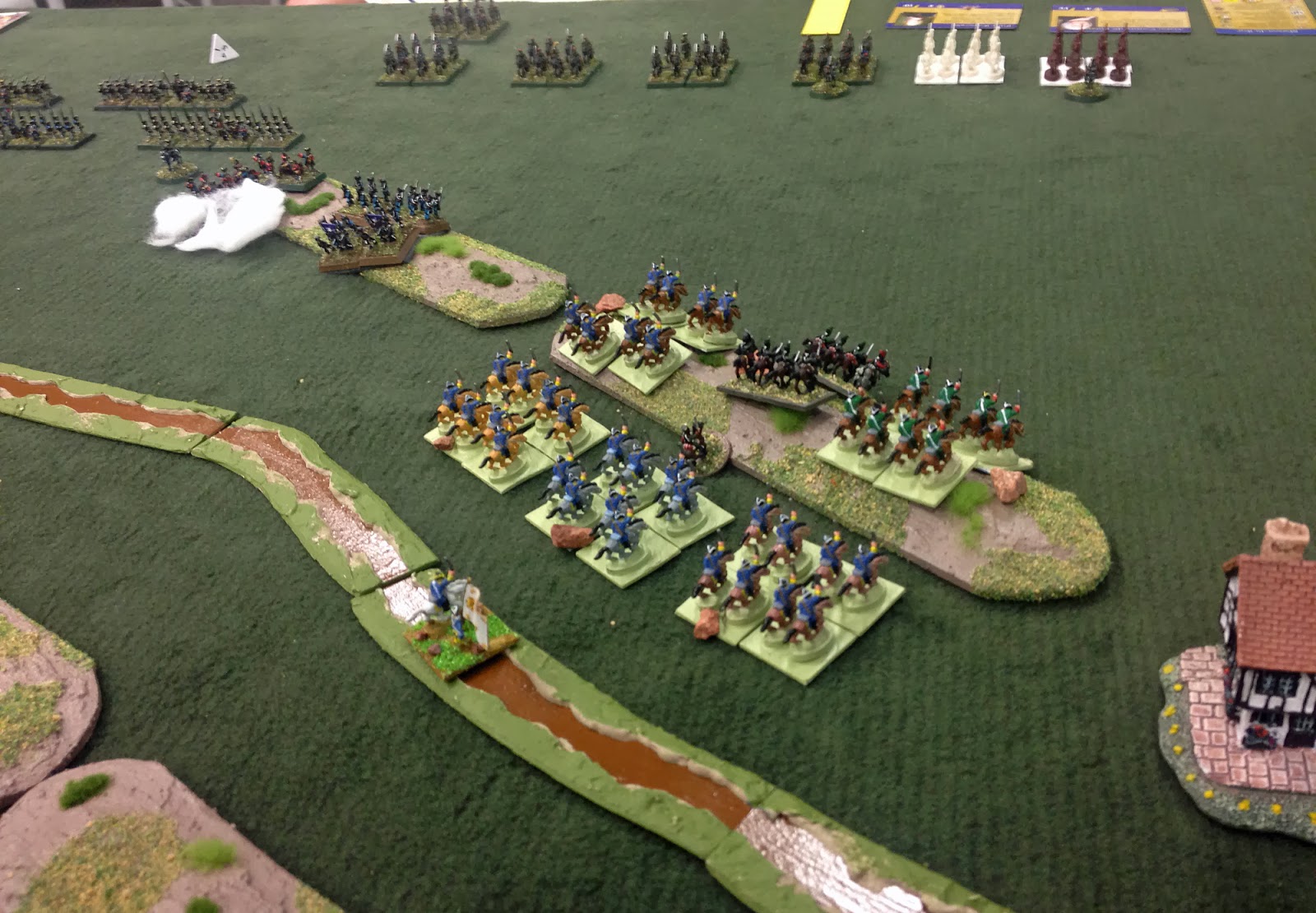 With my cavalry on his side of the table, Ralph pushed his forward to within charge distance of mine. He outnumbered me and outclassed me. This wasn't a fight I could win, and I couldn't shift the focus of the battle elsewhere because nothing else was remotely in position.

The Franco-Bavarian cavalry attacked, hitting the left of my line with both numbers and quality. Needless to say, one of my trained units fled immediately. 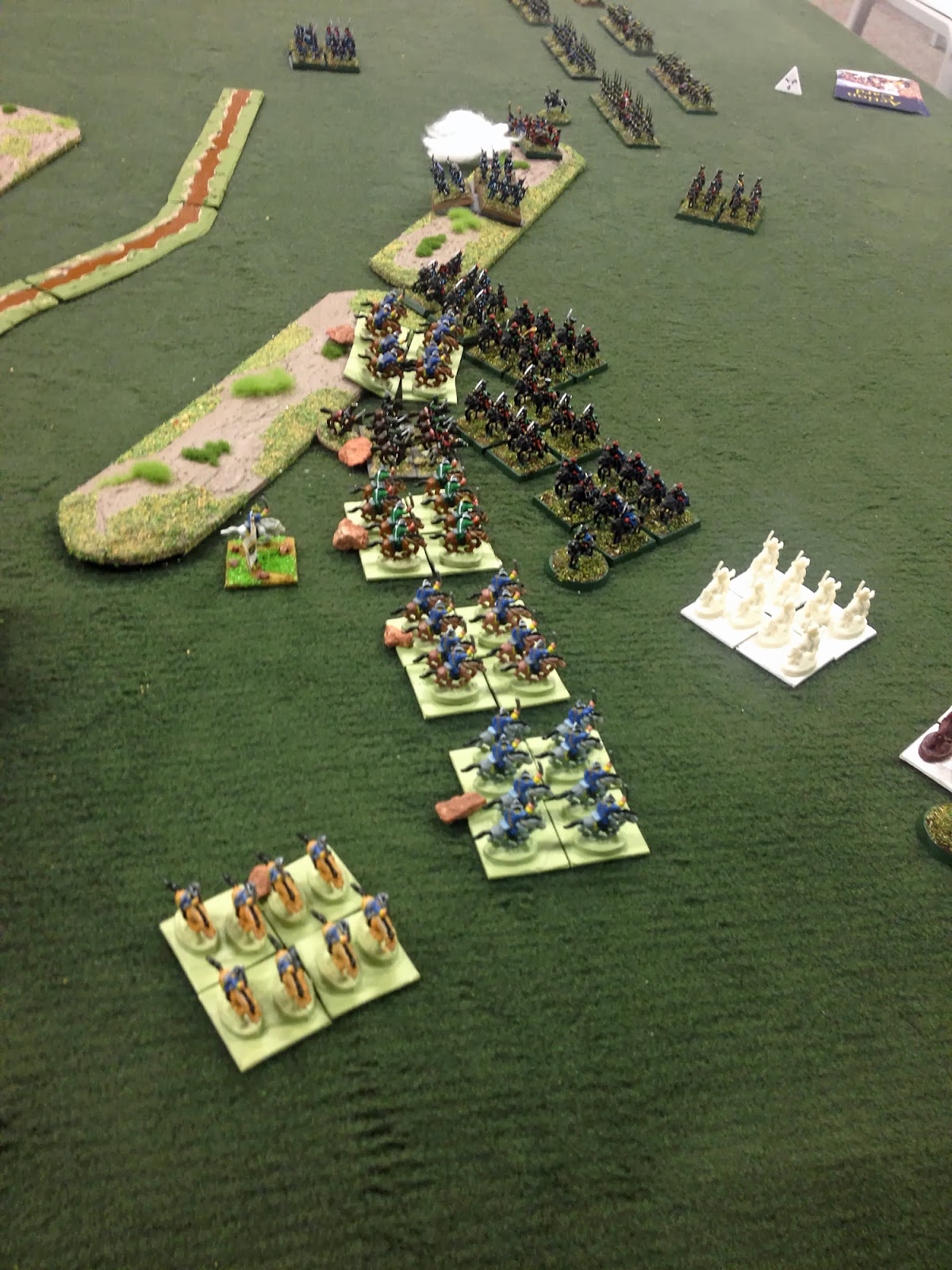 Ralph charged again, but luck was with me. I had just picked up a 'Stirrups In' card, and this enabled my line to hold his second attack. Not by much, it was true, but enough for my units to survive. And enough that some of Ralph's cavalry were on three or four disruption points. I ordered any cavalry that could to charge, and three of the Franco-Bavarian units fled. Of course my cavalry was disordered and vulnerable now, and I lost more units to Ralph's next charge. However his guard and elite units were becoming very disordered, so he pulled them back toward the cover of his main line. I had one unit in striking distance; a rear attack saw two more Franco-Bavarian units routed. 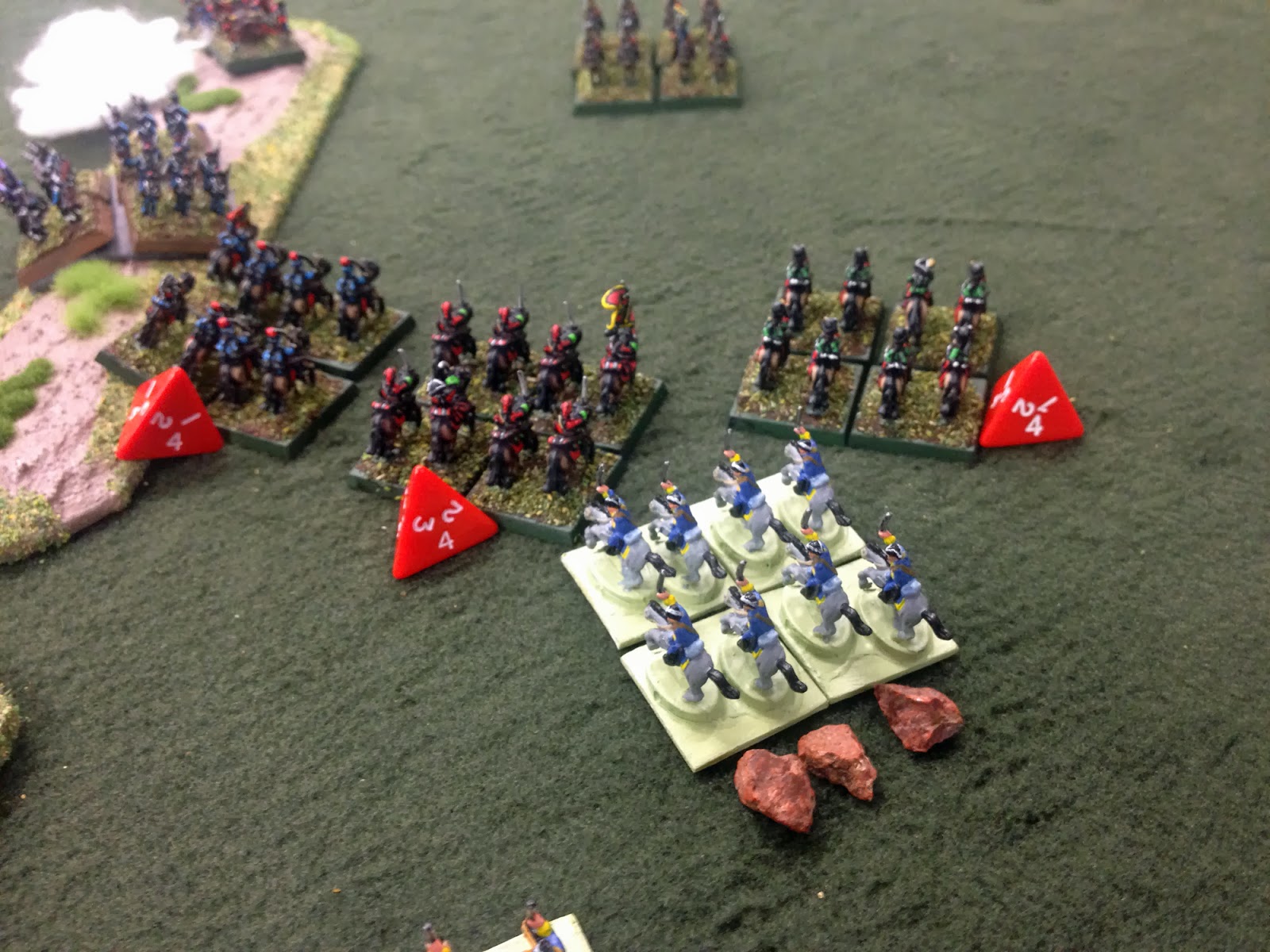 Ralph had a fresh guard unit however - left behind when his main line attacked - and that soon finished off the two remaining Anglo-Dutch cavalry units. 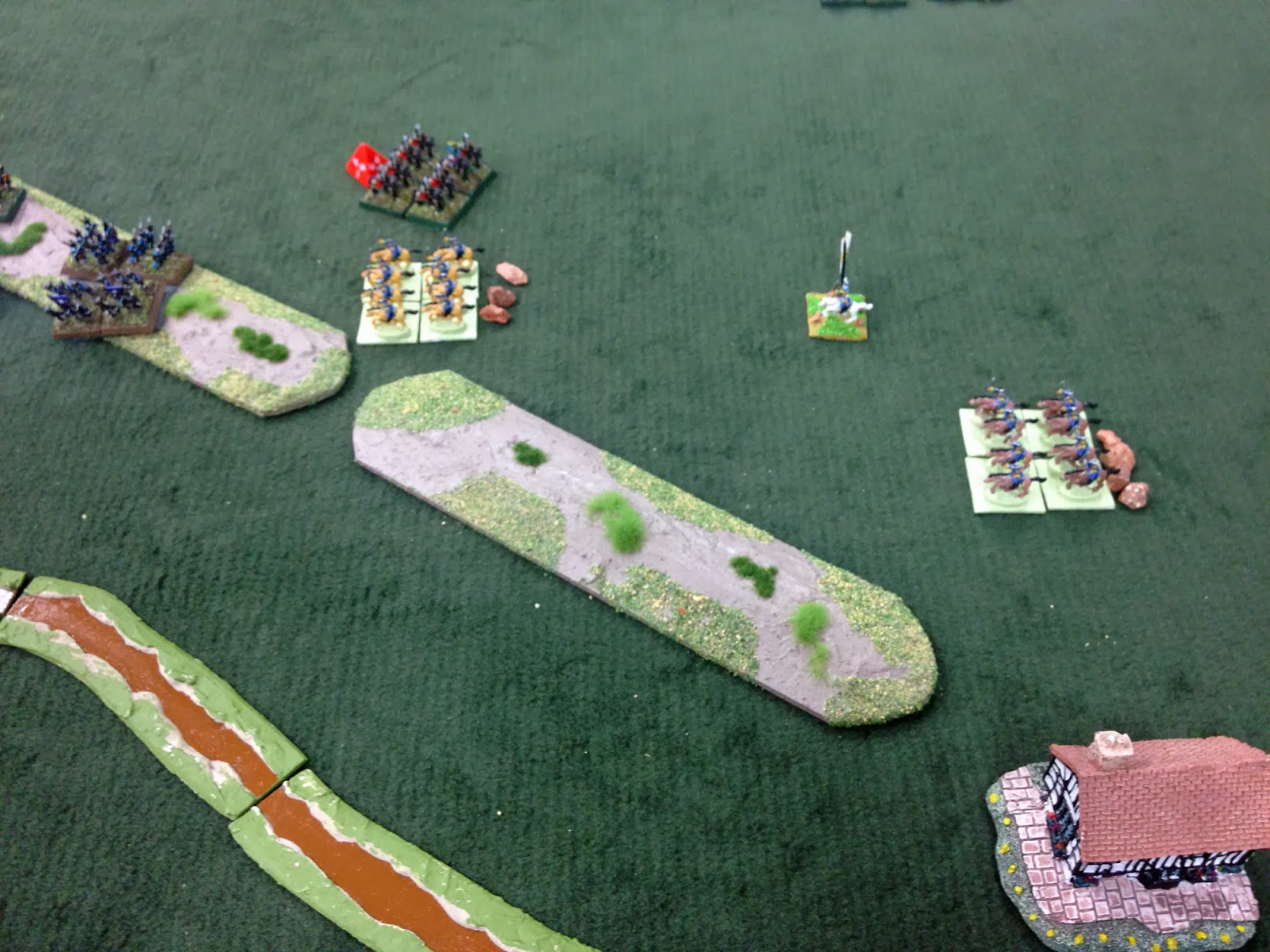 There had been thirteen cavalry units in play at the start of the game. As we finished the first deck, only one remained - a Franco-Bavarian guard unit, out wide on his left flank. On both sides morale had dropped from 18 to 6. Ralph moved the cavalry far over onto the flank, possibly with the aim of bringing it over the stream and threatening the exposed flak of my artillery. I moved two infantry units to cover that flank, and action on that side of the table fizzled out.

It was time for the Anglo-Dutch infantry to advance. I saw a good chance to win here - both of us were very low on morale, but I reasoned that in a head-to-head volley fight my Lethal Volleys would give me the edge. This only needed to be a short fight, as a couple of losses on either side could give victory to the other. Neither of us had units we could easily maneuver to affect the fight. 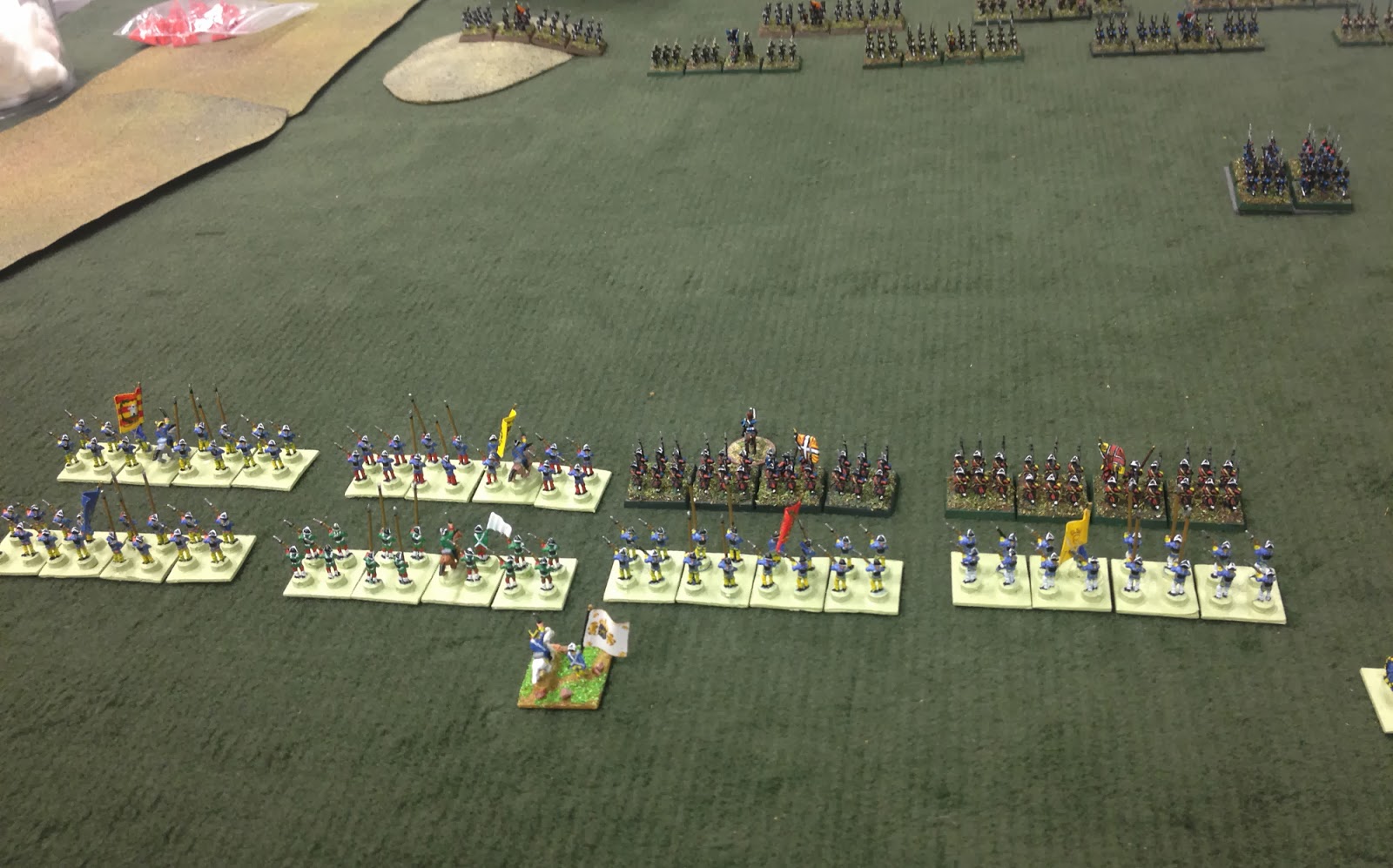 I started a bombardment of one of the Franco-Bavarian garrisons. This was partially to try and keep their heads down as the flank of my infantry line moved past them, but also because it gave me two cards from the deck. By alternating bombard actions with march moves to advance my infantry I was able to slowly add cards to my hand, depleted after the cavalry action. With the luxury of being able to sit and wait, Ralph just passed a couple of times in order to build his hand up. 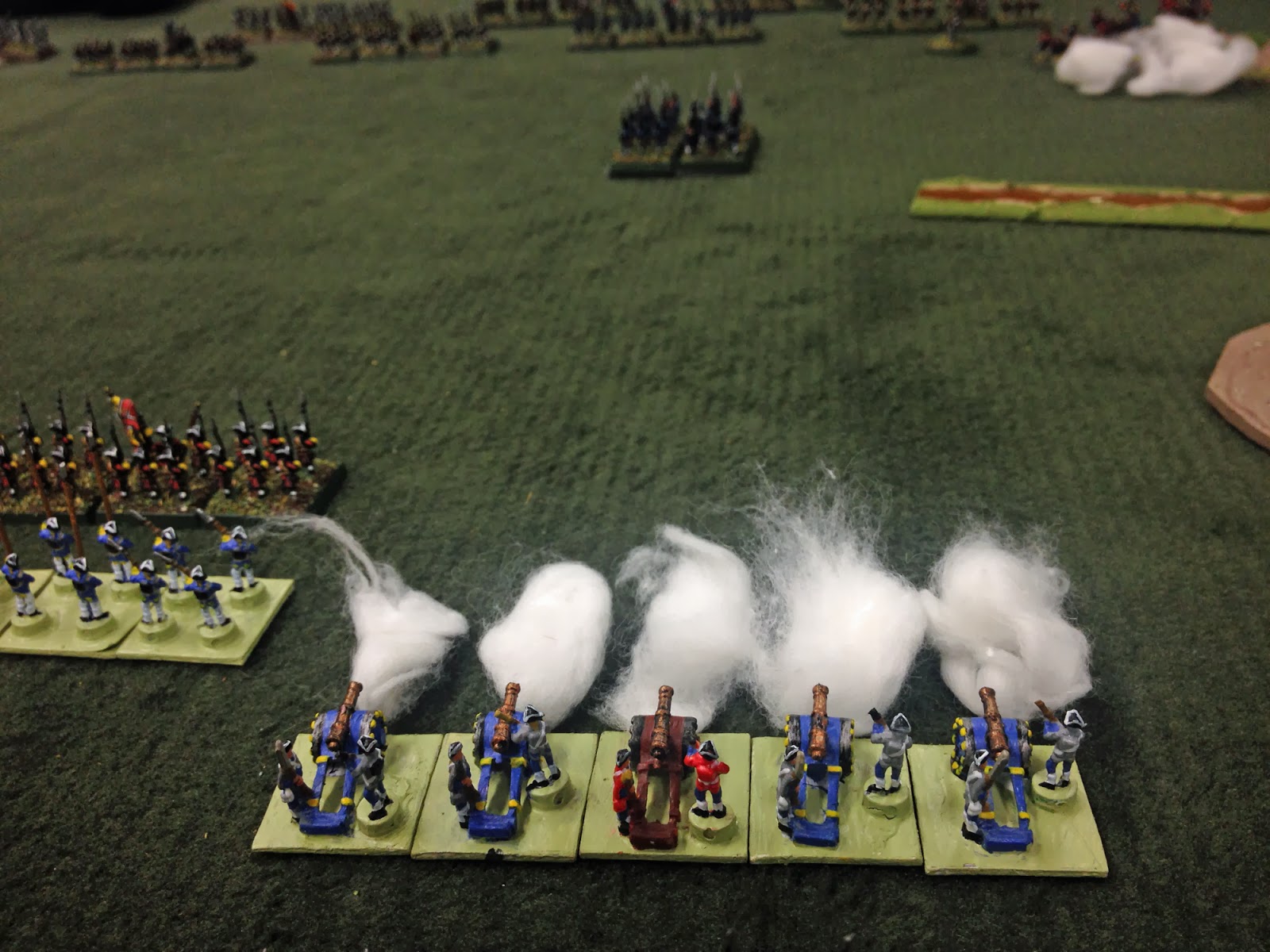 My infantry advanced past the garrison. I detailed one unit to take it under fire. 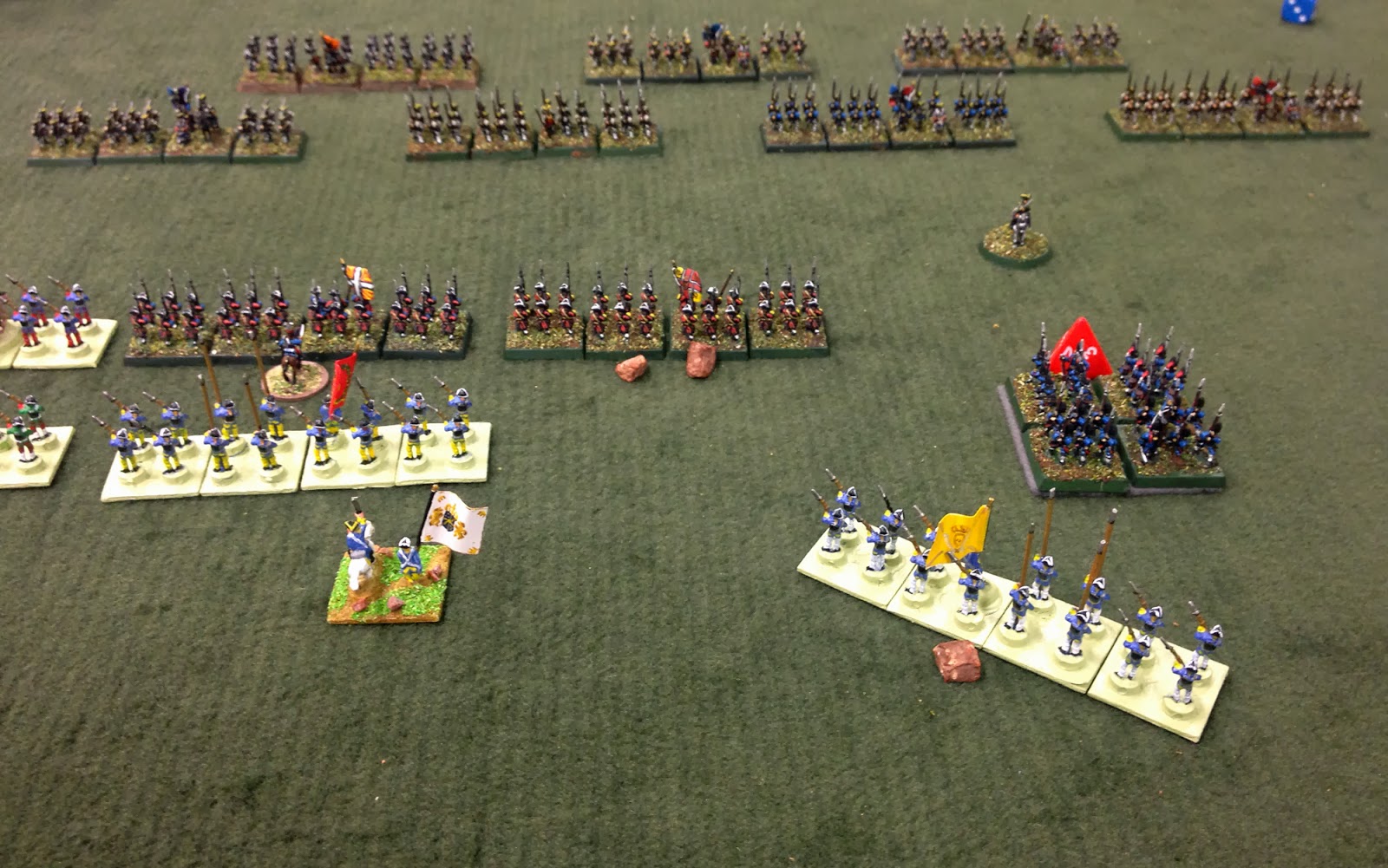 The lines closed. The first volleys were fired ...

... and I revealed my secret weapon. Throughout the game I had been stacking my hand with firing bonus cards. With the knowledge that the firefight need only be short, I threw them down like confetti - my first attack was enhanced with Deadly Fire, and one Franco-Bavarian unit was decimated where it stood. Other units were soon stacking up disorder. I used Firefight to force a volley phase on the Franco-Bavarians when they didn't want one, and First Fire to make mine count when they did. 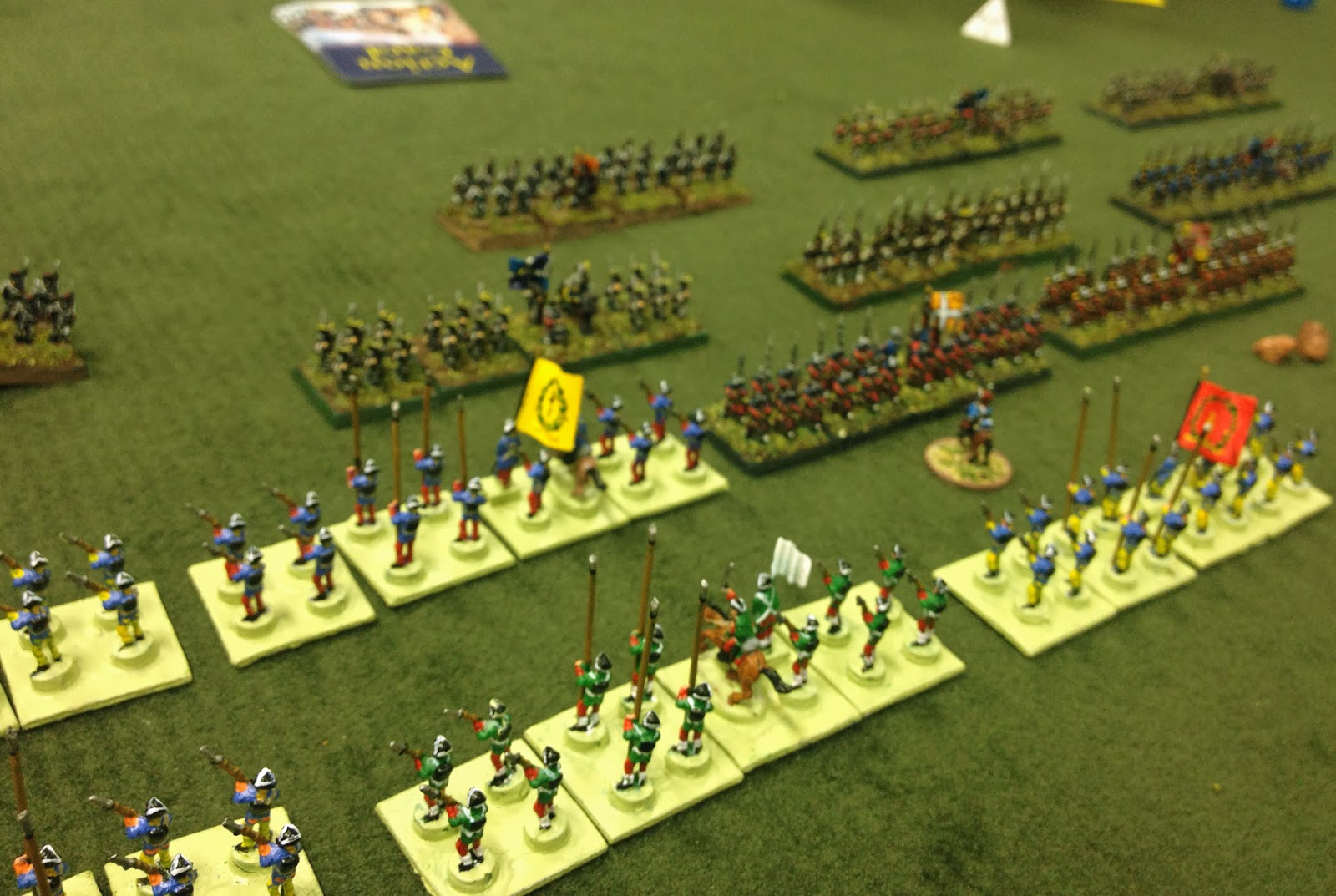 In a few turns it was over. Massed firepower won the day, wiping out three Franco-Bavarian units, and taking their morale to zero. I'd also played Death Of A Hero towards the end - a card I'd held since the beginning of the game - but I needn't have bothered. 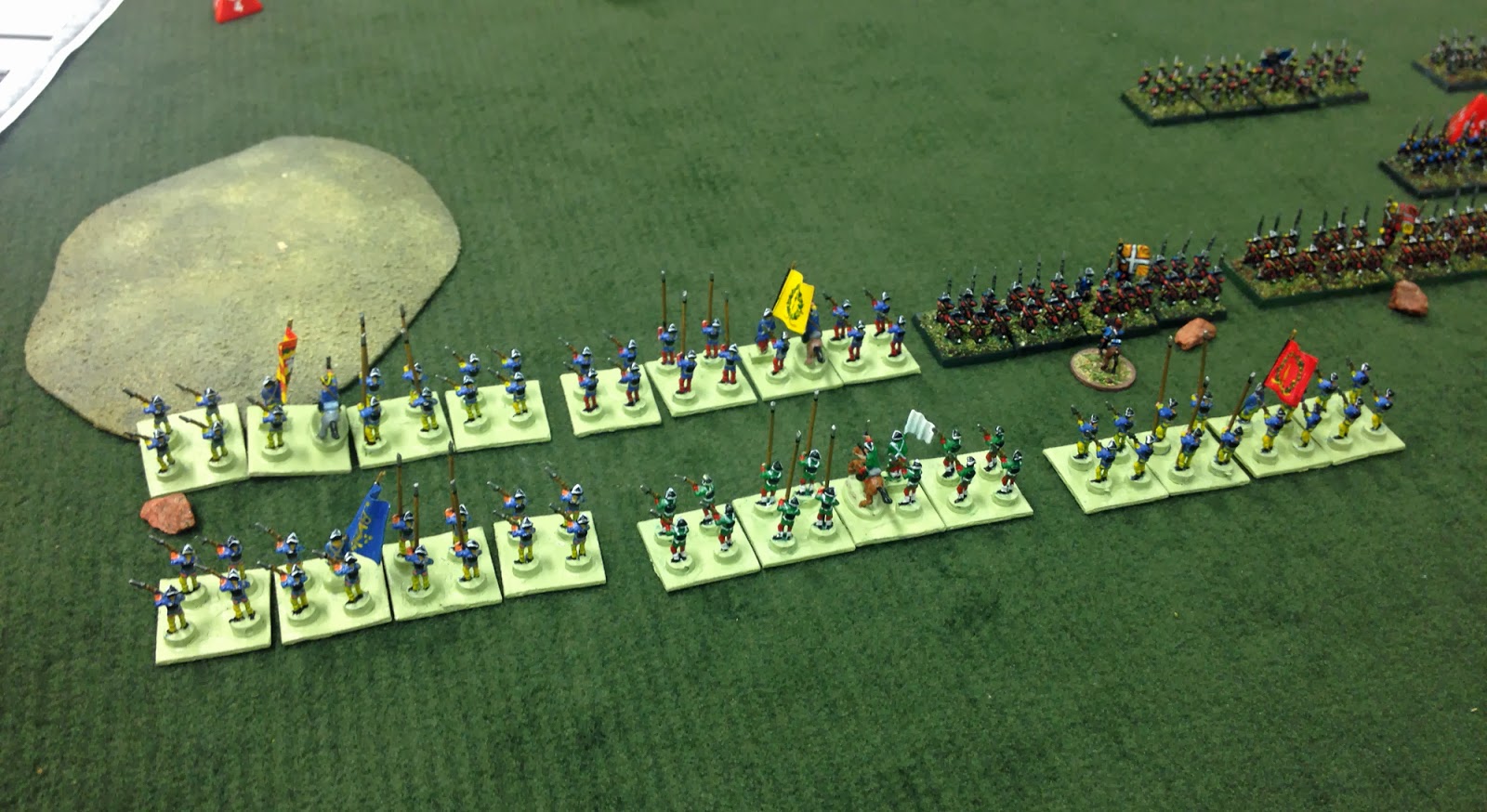 This was a bloodbath of a game, with both sides losing pretty well all of their cavalry. The key point for me was picking up that 'Stirrups In' card just when I needed it to hold of the second French cavalry charge. That saved my cavalry and gave me me chance to even the odds a little, which I was able to do. From that point the cavalry battle was just going to cause morale attrition, with the survivors probably having little chance to influence the rest of the game. And that suited me, because it meant there would be in a straight infantry fight, one I knew that I could win.

My thanks to Caesar for designing a cracking scenario, and to Ralph for being a gallant opponent. I was happy to see my Swedes in action for the first time, even under false colours.
Posted by Kaptain Kobold at 07:17