The Battle Of Blenheim 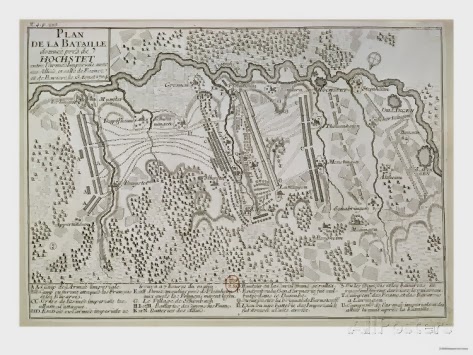 Last night we played a scenario for the Battle of Blenheim, using Maurice. We played it as a doubles game - two shuffled decks, and two players on each side. John and I took the allies, with him being Malborough and me taking Eugene. Ralph was the French and Caesar the Bavarians. All forces were 100pt Maurice armies, some with National Advantages. We used our various ImagiNations armies, including the justly famous and garish Riskovians and Sans Couleur forces.

Due to an oversight I managed to not have my phone with me* so didn't manage to take any pictures. Other people did, however, so I'm assuming that Ralph, at least, will produce a report with pictures that I can link to from here.

(Update: Here it is. Three pictures. One of the most epic games we've played in a while, and between us we managed three pictures ...)

Here's another map of the actual battle. Basically on one side the Anglo-Dutch faced the French, whilst on the other Eugene faced the Bavarians.


John and I attacked, since that's what happened in the actual battle. John got his troops into position swiftly, and pushed across the stream which bisected the battlefield with little trouble. Where his attack fell down was in his abysmal die-rolling. John's troops had Lethal Volleys, but try as he might he couldn't convert his significant advantage in shooting into rapid French casualties. The French fell, it's true, but not at the rate we'd hoped or expected. early on the French lost a unit to a sneaky combination of cards, which saw it suddenly advance on the Anglo-Dutch force, retire, then charge them, all the time passing over the stream and becoming more disrupted. Its loss blew a hole in Ralph's line and made his command and control awkward at the key moment Malborough crossed the stream.

On my side of the battlefield, I had put my cavalry on the extreme right, and my infantry in the centre, planning on pushing it forward to pin the Franco-Bavarian line, whilst John's lethal volleys rolled up and over their right. As a Great Captain I had a huge hand of cards, and played carefully in order to maintain it. Perhaps too cautiously - whilst my infantry pushed forward, Caesar marched his Bavarians wide onto my right flank, and left my cavalry facing most of his force. In Maurice cavalry are not that hot facing fresh, determined infantry, and I suffered for it. A counter-attack saw the Bavarian commander captured, and cost Caesar his hand of cards at a critical moment, but that was really the only bright spot of that engagement for me.

The game ended when we ran out of time. John had smashed the French infantry opposing him, and was keeping the rest of the army under pressure. Ignoring the garrison dug into Blenheim itself he was turning to roll of the Franco-Bavaria line from their right, whilst using his cavalry to hold of a counter-attack from the French cavalry. My infantry was pinning the remaining French infantry to their front. This forced the French into tricky command choices, as they were trying to fight two different engagements on widely separated parts of the battlefield. It was safe to say that the French would have been taken right out of the battle. The Bavarians were still strong, though, and looking set to wipe out Eugene's cavalry and artillery before forming up to fight the remaining Allied troops. Caesar was happy to concede, but my view is that there was a lot of battle still left to fight and the Bavarians could have still pulled off a victory for their side. I had a good hand of cards, but had an army that was in a bad position and starting to look a bit sick, whilst although John's troops were in good shape generally, he would be tied down mopping up stray French units for a lot of the game.

I certainly felt we have mastered the card-play in this game now. We all made mistakes in our choice of when and where to play cards, but we now play much more quickly and the game rattles along nicely. The Great Captain ability was fun; I never ran out of cards, and only towards the end did I see my hand beginning to deplete. On the other side, Caesar and Ralph both ran out of cards at key moments,and were probably always slightly on the back-foot when it came to cards - a peril of being the defender in Maurice.

The rules delivered an excellent game.Thanks to Caesar for organising it, and to everyone who provided figures and terrain (which includes me, for once).

*Actually I did, but it was hiding in my car, and I didn't find it until I was packing up to go home.
Posted by Kaptain Kobold at 07:24