This is another piece from my old website - a DBA scenario covering a battle on the Isle of Man. I'd forgotten about this until the other night when, whilst on a short camping holiday to celebrate our 21st wedding anniversary, my wife and I were reminiscing about past holidays in the UK, whilst sat around the camp-fire. 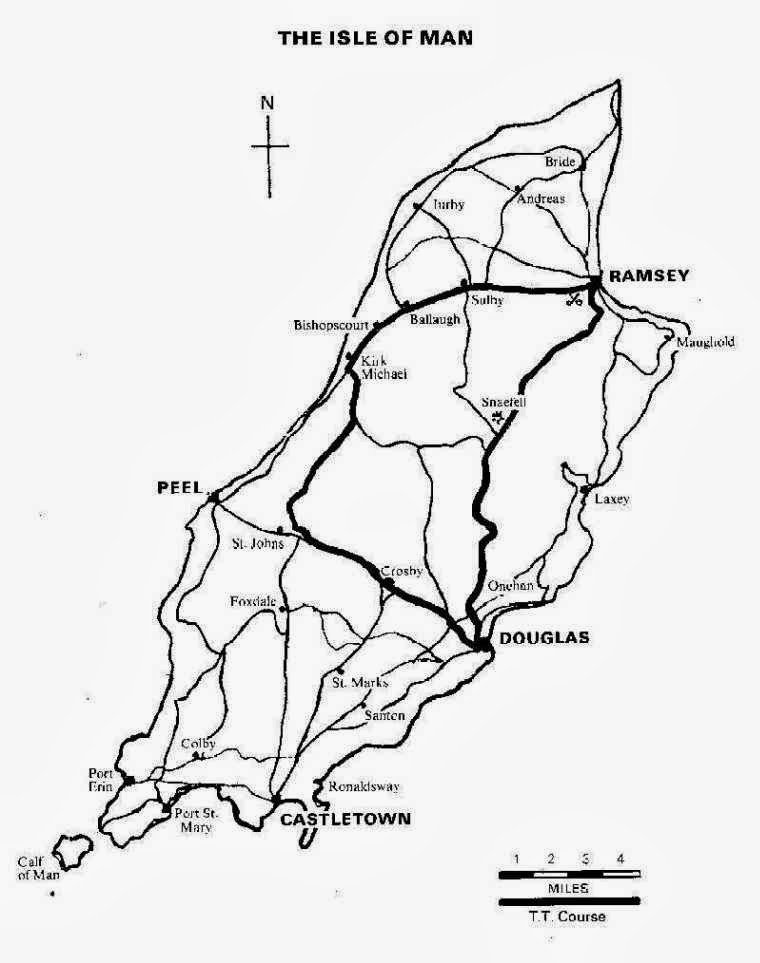 This battle took place on the Isle of Man in 1079AD (see map, which you can click on to enlarge), and although relatively insignificant in the overall scheme of things, it established a dynasty that would rule the island, and the Hebrides, for the next two hundred years.

Despite its relative proximity to Britain, the Isle of Man remained untouched by the Romans or Saxons, and at the time of the expansion of the Vikings still had a Celtic population. The Norse arrived in the early 9th century and settled relatively peacefully, creating a unique Norse-Celtic cultural fusion that is still in evidence today.

The Battle of Sky Hill seems to have occurred as an attempt by Godred Crovan to become king of the Sudreys. His father, Harald the Black was king from c. 1035-1040, but on his death the kingdom appeared to come under the control of the Earls of Orkney. When their control over the islands lapsed around 1049, the throne passed to a distant relation of Harald the Black, Sigtrygg, whose brother was king of Dublin. His son, Godred II, who reigned until 1075, succeeded Sigtrygg.

But what of Godred Crovan during this time? In theory, at least, he was a legitimate heir to the throne. It is probable he had spent some time in Norway, as he was married to a daughter of Harald the Ruthless, and fought with him at Stamford Bridge in 1066. After the battle, Godred Crovan came to Man, and was honourably received by the king (probably Godred II). When Godred II died in 1075, the throne passed to his son, Fingall, but he does not seem to have retained it long. In 1075, Godred Crovan assembled a fleet and an army, probably of Norse from the Hebrides, and attacked the island. He was repulsed, but was soon back for a second attempt. Again he was repulsed, but is during this period that Fingall 'disappears' from the record, and it is probable he was killed during one of the invasion attempts. In 1079, Godred Crovan came back, and the chronicles are reasonably clear as to what happened next:

"A third time he gathered a massive force and came by night to the harbour which is called Ramsey, and three hundred men he hid in a wood which was on the sloping brow of the mountain called Sky Hill. At dawn the Manxmen formed up in battle order and after a massive charge joined battle with Godred. When the battle was raging vehemently, the three hundred rose from their place of hiding at their rear and began to weaken the resistance of the Manxmen and compelled them to flee. Now when they saw themselves defeated without any place for them to escape to, for the tide had filled the riverbed at Ramsey and the enemy were pressing constantly from the other side, those that were left begged Godred with pitiful cries to spare them their lives. Moved with compassion and taking pity on their plight, since he had been reared among them for some time, he called off his army and forbade them to pursue them further."

It has been suggested that Fingall died at this battle, but the otherwise detailed account neglects to mention this, so it is unlikely. In any event by his victory at Sky Hill, Godred Crovan became king of the Sudreys, and took the kingdom to new heights, codifying its laws and exerting a measure of control over neighbouring kingdoms. Some of the Hebrides were lost in 1156, and the rest of the islands, including Man, passed to control of the Scottish crown in 1266. A final rebellion by the Manx occurred in 1275, but was defeated at the Battle of Ronaldsway, and the kingdom of the Sudreys ceased to exist.

This army is a combination of the DBA Viking army (106a) and the Scots Isles and Highlands (128). The general is Godred Crovan, and is one of the Huscarl elements.

This army is a cross between the Viking (106a) and the Leidang (106b). The general is nameless, but for the purposes of the game assume that it is Fingall. Once again, he is one of the Huscarl elements. 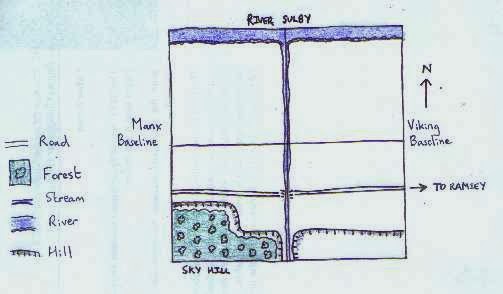 The Norse deploy first, placing ten elements of their force within 600p of their baseline. These ten elements must include the general. The other two elements are involved in Godred's Stratagem; see Special Rules. A Viking long-ship (or some equivalent marker) should be placed on the river, 600p from the Norse baseline. This may or may not have an effect on play, but will look nice regardless.

The Manx then deploy within 600p of their baseline and take first bound.

Both sides have a camp.

The river is impassable to all troops but Godred's ships; see Special Rules.

The forest is impassable, but troops may ambush out of it; see Special Rules.

Any troops that are forced to recoil into the forest or the river are lost.


The fordability of the stream should be diced for. Dice for the two sections each side of the ford separately. As it does not seem to have presented a major obstacle in the battle, apply a -1 to the die roll.


In the actual battle the Norse hid 300 men in ambush on Sky Hill. This special rule simulates this, but allows for the Norse player two alternative options in order to keep the Manx player guessing.

Ten of the Norse elements are deployed as normal. The other two elements are kept off table, and the Norse player must secretly choose one (and only one) of the following options for them:
If the elements are merely off-table, they may enter as a group anywhere along the Norse baseline at the cost of 1 PIP.

If either of the other two options has been chosen, then the option may not be revealed until the Vikings roll a '6' for PIPs. On the bound they roll a '6', or on any subsequent bound, they may reveal their chosen stratagem according to the following rules:

If the ship option is chosen, then moving the ship reveals it. The ship costs 1 PIP per turn to move, and may move up to 400p. It may only move on the navigable portion of the River Sulby; the last 600p towards the Manx baseline are not navigable. The elements on board may deploy on the river's edge as a group for 1 PIP; deploy them side by side, centred on the middle of the ship. They may deploy in contact with enemy, but remember they are lost if they are forced to recoil into the river. Once deployed, the ship has no further effect on play, but can be retained on-table for decorative purposes. If the ship option is not selected, then it remains on table, but may not be moved.

If the Sky Hill option is chosen, then it is revealed by the Norse player moving the hidden elements out of the forest. The elements may group move or move as single elements, but both must exit on the same turn. They may be deployed in contact with enemy elements, but count as being in bad going for the ensuing combat. If forced to recoil whilst on the forest's edge, then they are lost.


I came across this battle whilst on holiday on the Isle of Man in June 1999*. I had, in fact, assured my wife that the island was free of battlefields to visit, but discovered I was wrong on the second day. Needless to say I spent inordinate amounts of the remaining holiday trying to work out how to game the battle. Virtually all of the information about the battle can be found in the above excerpt from the Chronicles; the rest of the detail is conjecture. The driving force behind any decision has always been the need to create a good game.

The 'hook' with this battle was Godred's ambush. Unfortunately, such things are difficult to pull off in scenarios, unless one player is unfamiliar with the battle, and you only want to play the game once. I decided that perhaps giving the Vikings a couple of options for their ambushing force would create the right level of uncertainty for the Manx player. The option of the riverborne force grew out of the reference to the tide filling the riverbed, the fact that these were Vikings after all, and finally to the discovery of an unpainted Irregular Miniatures 6mm Viking Longship just begging to be used for something.

How big is this battle? Godred's force is described as 'massive', and having a 'great number' of ships. This suggests that his army was at least a couple of thousand strong, probably larger, although these descriptive phrases could just be chronicler's exaggeration. In any event, his ambush force would be a very small proportion of his available army, less than 10% probably. I have chosen to make it two elements, or 15% of his force, so that they are worth fielding. Assume that they have a morale effect out of all proportion to their numbers. There is no evidence at all for the size of the Manx force (I don't even know what the population of Man was likely to be at the time), so I have assumed that it is roughly equal to that of Godred's force. It is likely to have been larger, in which case it can be assumed to be less enthusiastic or well equipped. For game purposes it has the same number of elements.

I have defined this scenario in terms of the ground scale given in DBA. In fact, given that the armies were relatively small, the map is based on a scale of 1" = 50p. This should be borne in mind when trying to translate the battle to other systems, or to relate the scenario to geographical reality!

I took a few pictures of the battlefield.

View of Sky Hill from Ramsey 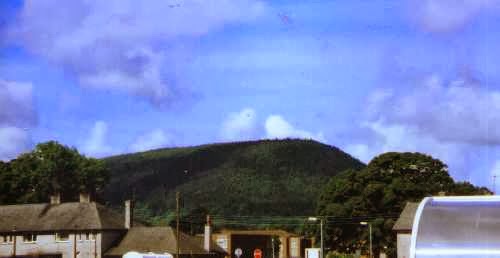 Sky Hill and the field of battle from the east. The trees in the foreground line the stream. 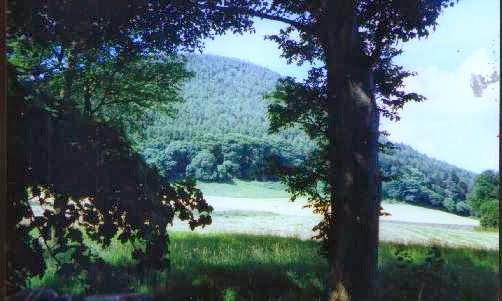 View from the edge of the forest on Sky Hill looking out north east over the battlefield. 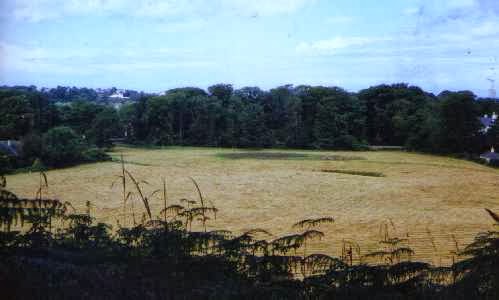 The plaque commemorating the battle. 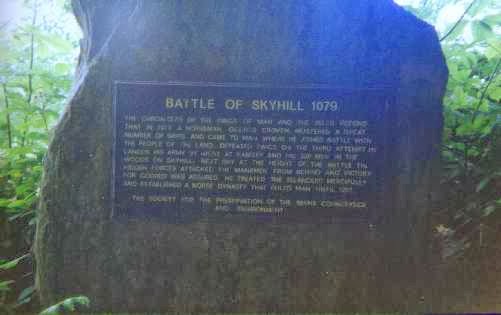 Close up of the plaque. The text reads:

"The Chronicles of the Kings of Man and the Isles record that in 1079 a Norseman, Godred Crovan mustered a great number of ships and came to Man where he joined battle with the people of the land. Defeated twice, on the third attempt he landed his army by night at Ramsey and hid 300 men in the woods on Skyhill. Next day, at the height of the battle the hidden forces attacked the Manxmen from behind and victory for Godred was assured. He treated the islanders mercifully and established a Norse dynasty that ruled Man until 1265."The Society For The Preservation of the Manx Countryside and Environment 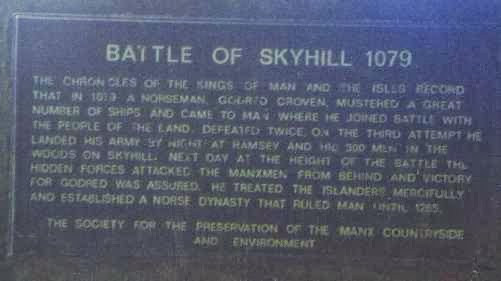 The following publications proved invaluable in designing this scenario:


The two maps were scanned from 'A Brief History Of The Isle Of Man' by G.V.C Young (1981) and used with permission.

*So I was accompanied on my battlefield tourism not only by my long-suffering wife, but by my children, then aged two and three.
Posted by Kaptain Kobold at 18:19