One of the reasons for putting Machinas on my 6x6 list was to allow me to finally pull together the various, and in some cases extensive, modifications I've been making to the rules. These notes are scattered all over the place, and need to be consolidated. In some cases I have multiple solutions for a single issue, and I need to come up with the one I want to run with. The best way of doing all this is play lots of games to test the changes.

So the other day I ran through a couple more races, using cars with random features, signatures and driver skills, allowing me to test various changes there, as well as the race handicapping system and some of the AI mechanisms. Obviously the car equipment/weapons would get tested as well.

I generated each vehicle, then rolled to see which one would be me, the other three being played by the AI. Each race was four cars running three laps.

In the first race I was the ram-car Red Tide, shown in second place here. This is a one-trick pony, with all of its weight allocated to the big ram-plate on the front.

After a strong start, I ended up being forced into last place during the first lap. 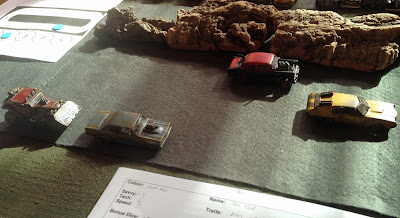 In the second lap I started thinning out the opposition. The grey car, Born To Run, was first to fall. 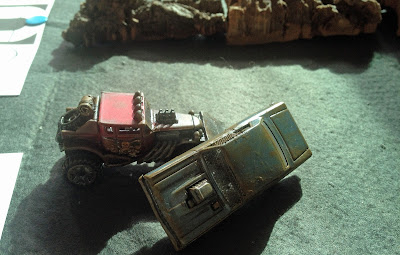 I then got an opportunity to take out Pigs On The Wing, a dangerous opponent whose rear-facing gun made any failed approach risky. Once again the ram-plate proved its worth. 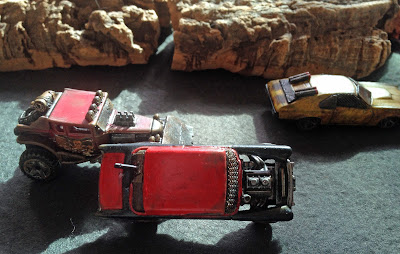 This now left just two of us in the race. I got lucky; on a random event the lead car, Mary Jane's Last Dance, skidded back when its brakes locked up, and basically threw itself onto my ram. 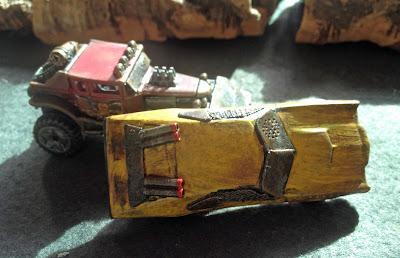 Three kills gave me a default win. The one-trick pony approach paid off in this case, but the rules I have for a ram-plate do make it fairly deadly, and I may have to consider toning them down a little. 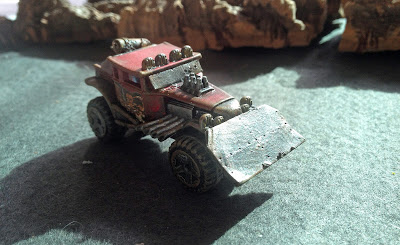 The second race featured, from left to right, the gun-toting cruiser Miss Murder, the rat-rod Blues Breaker, the vintage A Farewell To Kings and the art-deco speedster Black Dog. I ended up with A Farewell To Kings. Again, the race had a one-trick pony competing in it; Black Dog is all powerful engine, and nothing else. 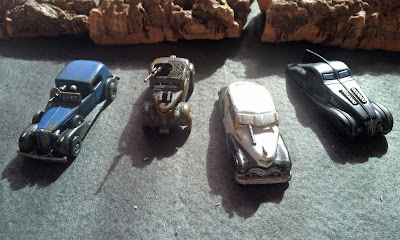 I took a comfortable second place again for the early part of the race.

Blues Breaker tried to overtake a couple of times. Eventually I decided I'd had enough, and rammed him in response to a failed pass. 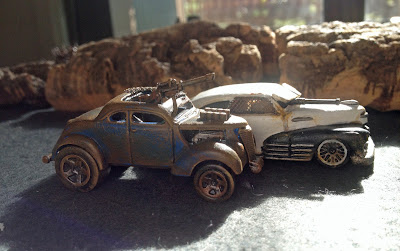 He flipped and crashed, almost taking out Miss Murder as well. 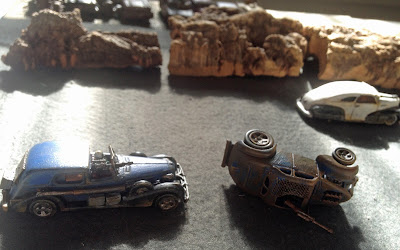 The rest of the race was relatively uneventful. Black Dog mostly maintained its lead, through sheer speed, although it did pick up a few bullet-holes along the way. I tried to hold back and pick up momentum for a final push at the end of the race, hoping to get ahead on the final curve, where the two faster cars wouldn't be at so much of an advantage. But a random event saw my pass blocked before I could start it, leaving me in third place on the final run to the finish line, in a car ill-suited to that kind of sprint. Miss Murder failed to take the lead from Black Dog, and I couldn't even manage to pass Miss Murder. 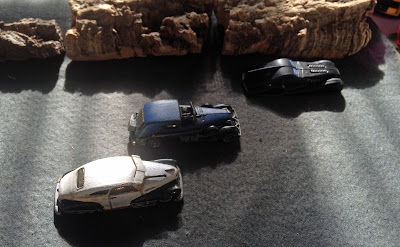 Once again a car with everything piled into one tactic pulled off the win. I suspect that some of it is due to the AI, which can only be so good at simulating the behaviour of a live player, especially in the way vehicles expend their bonus dice. Sometimes a car will set itself up in a good position to do something such as pass or shoot, but then show a 'reluctance' to spend dice in the effort and throw the chance away. Alternatively a car will make constant attempts to pass another vehicle with virtually no chance of success, burning up their own dice to no effect. Maybe I need to make a few sensible gut-feel decisions on behalf of other vehicles if I feel that the AI has fed them a raw deal.

Whatever the outcome, both races gave me some useful feedback, which I will use to modify the rules changes.

Apologies for the dodgy photos. The room I game in now picks up lots of lovely winter morning sunshine, which warms it up nicely. Unfortunately it also shines directly across my gaming table, leaving shadows from the car-port and window frame, and throwing the contrast and brightness out. Hopefully things will improve on that front as the days get longer and the sun gets higher.