The Battle of Birmingham

There was a Battle of Birmingham in 1643. Who knew?
Well, obviously quite a few people knew, but until a couple of weeks ago I didn't. I was quite excited by this discovery, as Birmingham was where I was born and grew up. It's my home town. A battle in your home town is always an exciting thing.

To tell the truth it wasn't much of a battle; more a skirmish. But it's the best we've got, and I wasn't going to let it pass without a game.

Wikipedia calls it the Battle of Camp Hill, but what do they know?

In a nutshell, in April 1643 Prince Rupert was marching north from Henley in order to besiege Lichfield. His route took him through Birmingham, known to be a hotbed of Parliamentarian sympathisers. Birmingham was unfortified, and virtually ungarrisoned, so Rupert reasoned he'd be able to march straight through. But the few defenders were having none of it; they barricaded the southern end of the town and resolved to fight, despite only having about 120 musketeers, a few armed townsfolk and a troop of cavalry against some 1500-2000 Royalists.

Here's a map of the town at the time, from a local history website. Rupert arrived from the bottom right: 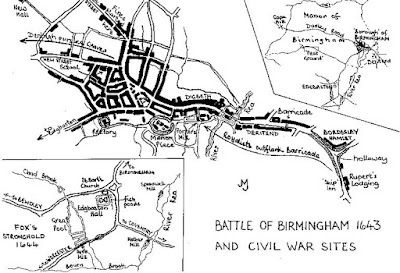 Rupert attacked, but couldn't dislodge the musketeers from their improvised fortifications. Instead he sent his cavalry around the flank. The horse crossed the River Rea, and swung into the town, cutting down and pistolling any opposition they encountered. The musketeers fled, with the cavalry in pursuit, and the Parliamentarian horse, who had been stationed further back in the town fled as well. However a little way out of the town the fleeing horse turned and attacked their Royalist pursuers, killing their leader, Lord Denbigh. The Parliamentarian horse then retired to Lichfield, whilst the Royalists sacked the town, killing a number of civilians.

During the battle Rupert's troopers set fire to a number of buildings, and pamphlets of the time speak of the outrage this 'continental' style of warfare engendered. It certainly made Rupert an unpopular man in some quarters.

On the whole this isn't much of a battle to refight, as the Parliamentarians are pretty much done for from the start. However I decided to set up a version of it that would give entertaining game, even if the balance might be a little off. I used my One Hour Wargames ECW variant rules.

Here's some scene setting; a picture of how Birmingham looked at the time: 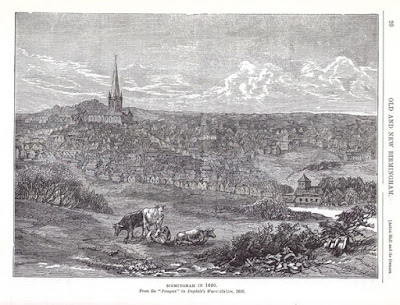 I gave the gallant defenders of the fair city of Birmingham three units:

Clubmen are not something covered in the rules. I ran them as Pike and Shot infantry except that they meleed with 1 dice and fired with 2 dice, taking only the single lowest roll as their result. Oh, and they didn't get the pike bonus vs horse.

I decided not to cover the long cavalry pursuit in order to fit the game on a sensible board size. This was the playing area. The River Rea bisects it. Unlike normal One Hour Wargames rivers I allowed it to be crossed along its length. However a unit had to stop movement on reaching it, so it acted as a slight obstacle. South of the river was an area of buildings defended by the Shot. The Clubmen (representing the townsfolk) occupied the larger northern part of the town. Troops occupying town areas were assumed to fill it and count the town as their base. they could fire from one edge during the turn. 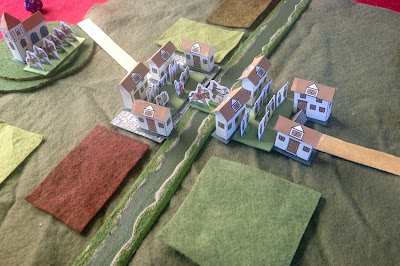 Rupert and his troops arrive, and Rupert sets up a headquarters in the Ship Inn. For this game Rupert's force consisted of:

I will cover 'Dashing' below in the notes on rules changes.

Rupert starts with two units on the board; one of the Pike and Shot and the Artillery. At the start of his second turn, and each turn thereafter he rolls a D6 and on a 4+ could bring on another unit anywhere along his starting edge. Thus whilst Rupert has an overwhelming force, it takes him a while to assemble it.

I gave Rupert 15 turns in which to capture and hold the northern end of the town. If he failed, night would fall and the defenders retire to tell tales of his failure. 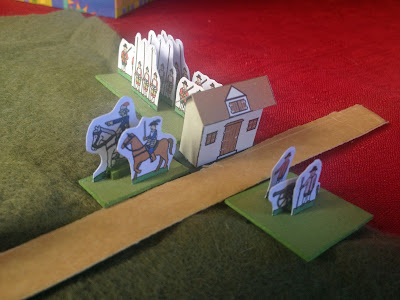 Rupert followed the historical plan and attacked the shot defending the southern end of the town. Supported by the artillery, the foot advanced. Both sides exchanged musketry, and with neither side inflicting much in the way of casualties. 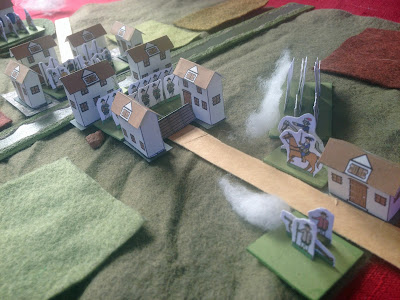 The Royalist foot charged the town, but were repulsed. 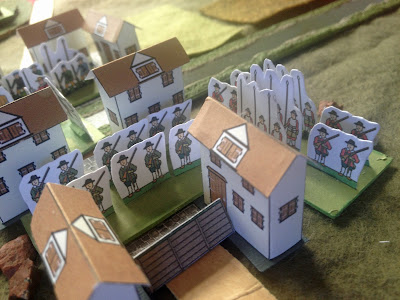 In the northern part of the town the citizens awaited the Royalist attack with some trepidation. 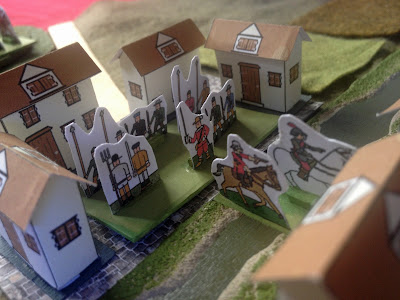 Royalist cavalry arrived, and advanced quickly to cross the river, taking some fire from the barricades as they did. 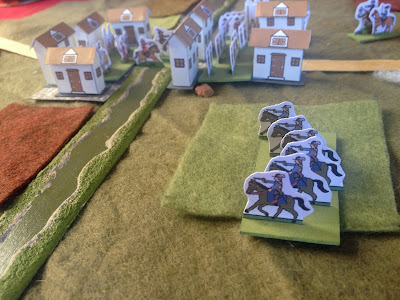 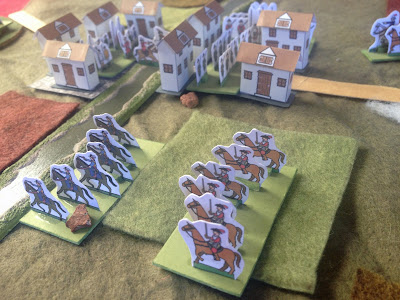 The Royalist horse wheeled into the attack ... 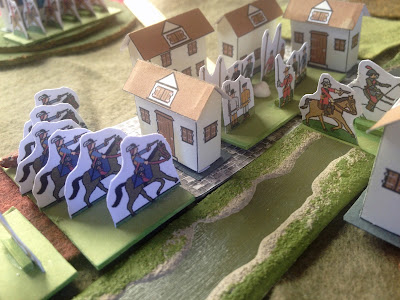 ... but the Parliamentarians hit them in the flank, shaking them. 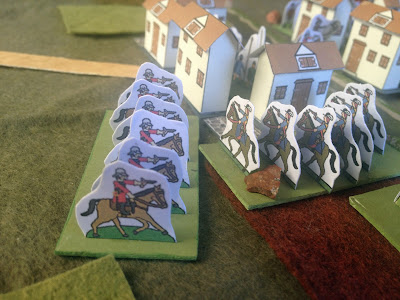 Unfortunately this was all too much for the good citizens of Birmingham, who scattered. 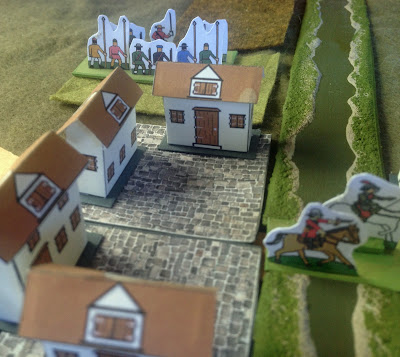 Meanwhile the Royalists broke into the other part of town, driving out the Parliamentarian musketeers. 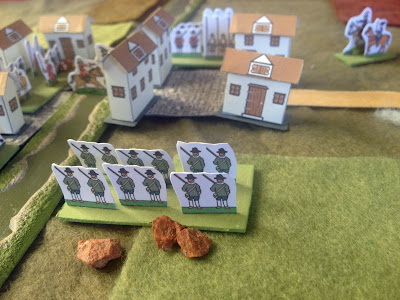 More Royalist foot arrived, as the shot tried to establish a position in the fields alongside the river. 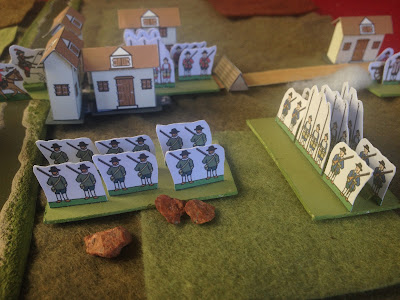 The Royalists occupied the defences. 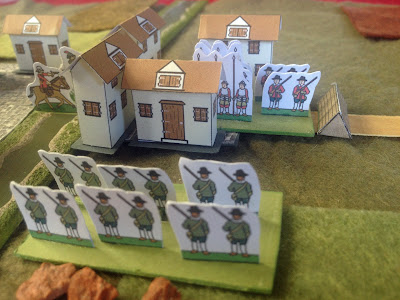 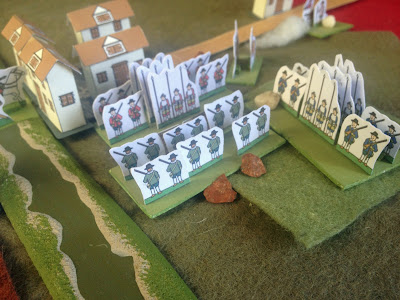 On the other side of the river, the Parliamentarian horse broke the Royalist cavalry vanguard. 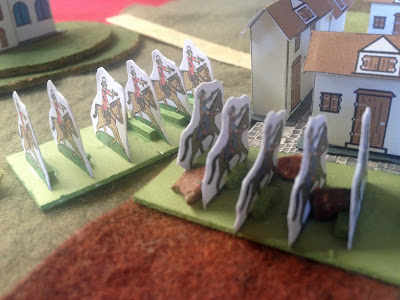 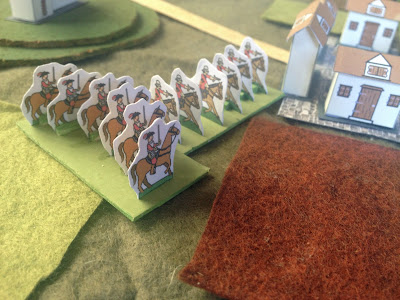 The fighting was desperate on both sides of the river. 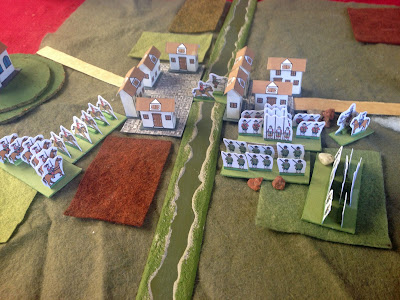 The Parliamentarian cavalry held on as best it could ... 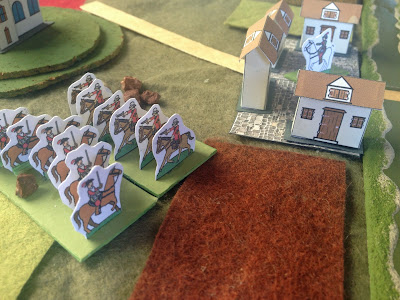 But first the horse broke, leading to the Royalists pursuing them far, far away from the main fight. 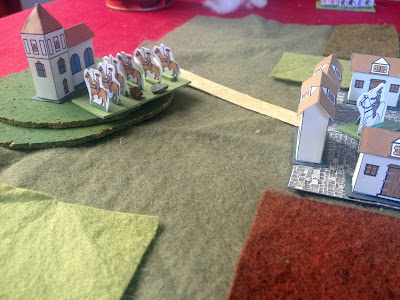 Then the shot broke, fleeing across the river 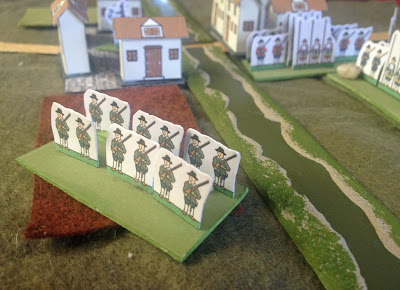 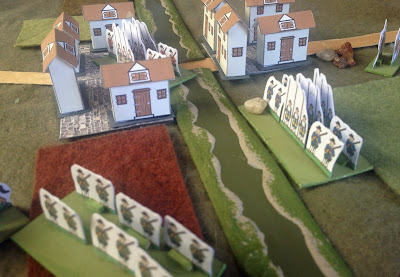 It took Rupert 12 turns to drive off the defenders, although he had some unlucky rolls for reinforcements early on. I used some new leadership rules in this game, which did keep the defenders in the fight , but allowed the attackers to press home their attacks again and again as well.

As I have said above I tried a few changes to the rules.

Horse - Rather than having Gallopers and Trotters as the two categories of horse I am working on treating all Horse as basically the same, then adding in tweaks to reflect tactical differences. So all horse basically operates as Gallopers in the current rules, although I'm unsure at the moment whether to give them a 9" or 12" move. In this game the Royalist horse were given the Dashing trait. This allows them to recover their impetus dice automatically under certain circumstances, but also requires them to automatically pursue a retreating or beaten enemy. If I give normal horse a 9" move then Dashing would up them to 12". I am looking at the opposite of this trait as well; Discipline would use the impetus dice sightly differently and make the horse far less likely to pursue (indeed I would probably remove automatic pursuit altogether). This would reflect the better or ater types of Parliamentarian horse. So now horse would be Basic (the majority), Dashing or Disciplined.

Pursuit - Pretty much as it seems. In certain circumstances units would acquire a pursuit marker. This would require them to make certain moves until it was removed, either by a Command Roll (see below) or through circumstances.

Command Rolls - I gave both armies a leader. At the start of a side's turn the leader could move to any point on the board and then make up to three command rolls. A command roll could be made on any unit within 6" of the leader's position. A single command roll could be used to: remove one hit from a unit (but the unit must always be left with at least one hit if it had taken any), remove or place an out of ammunition marker, remove a loss of impetus marker or remove a pursuit marker. Only one roll per type of marker can be made per unit per turn (so you can't remove multiple hits from a unit in one turn, for example, or use multiple rolls to remove an out of ammunition marker). The command roll succeeds on a 4+. I am considering making it such that if the leader moves they only get two command rolls, making it important that you decide where is is each turn.

I have deliberately kept the description of the changes a little vague, because I am still working on these ideas. One other thing I am looking at is reflecting three types of Pike and Shot - balanced, pike-heavy and shot-heavy. With the granularity my two dice combat roll offers this is not proving easy, but I think I have a possible solution.