The Battle of Fletcher's Cross - Refight 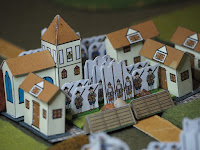 I thought that it was about time I kicked myself up the bum and got on with playing and writing up another game in my project to play all of the scenarios in 'One Hour Wargames' in order. However I actually played the next scenario (16 - Advance Guard) only a couple of months ago, just after putting together my paper ECW armies. I could have cheated, and just counted that as the game, but instead I decided to play it again, with the same forces and (roughly) the same rules. I say 'roughly' because they have moved on since then, and I am now exploring a few ideas for simplifying and streamlining the combat mechanism, whilst still allowing a certain amount of granularity so that I can reflect certain troop types.

Anyway, the battle started once again with the village of Fletcher's Cross enjoying a quiet Sunday morning (or Monday evening in this case). 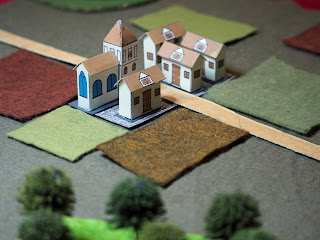 The peace was shattered by the sounds of a force of Royalist troops under Lord Standing, coming from the north. The force consisted of four units of pike and shot, one of dragoons and one of horse. 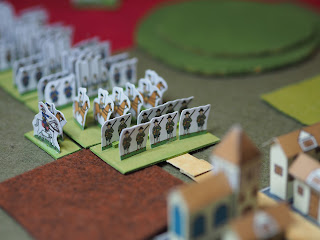 Simultaneously Sir Thomas Barnaby's Parliamentarians were advancing from the south, with three units of pike and shot, one of dragoons, one of horse and a battery of artillery. 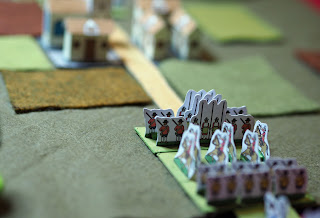 The Royalist dragoons occupied the village and opened fire on the surprised Parliamentarians. 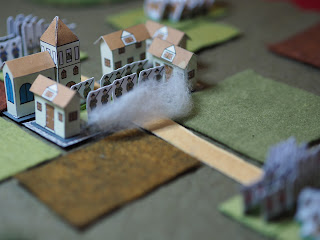 Both sides rushed to deploy their troops before and around the village. The Parliamentarian foot moved to bring musketry to bear on the village, and also deployed their guns astride the lane. Both sides sent their horse to the east. The Royalists, anticipating that their dragoons might not survive an onslaught by the full Parliamentarian force, positioned a unit of foot in reserve, ready to occupy the village if the dragoons were driven out. 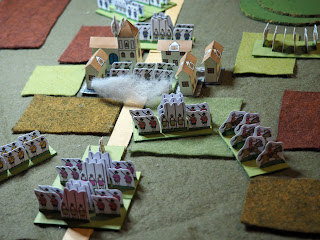 A view of the battle from behind the Royalist lines. 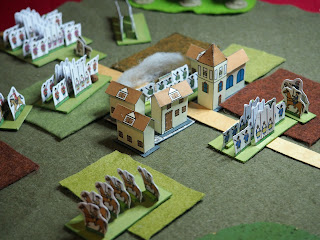 To the east the horse clashed in a battle that would last for several turns with neither side gaining any advantage. 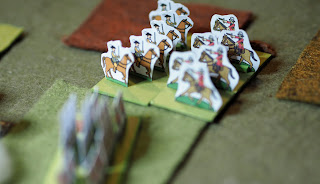 Fierce fighting erupted on the south side of the village, as the Parliamentarians brought their full force to bear. The dragoons defended themselves gallantly, though, barricading the streets and laying down a telling return fire. 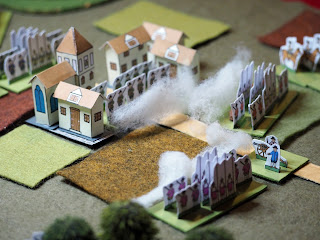 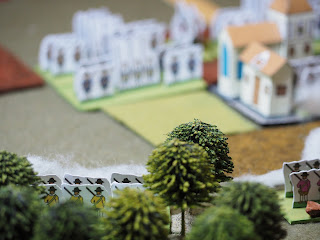 The Royalists attacked to drive them out of the copse, and another long struggle ensued. 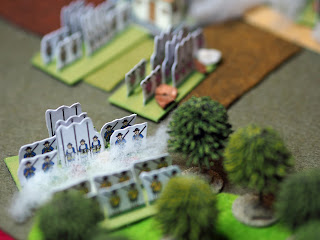 Sir Thomas personally directed the attack on the village. 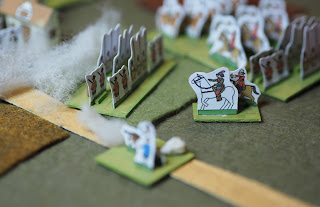 Meanwhile Lord Standing was content to lecture the Royalist foot on the importance of keeping a reserve. 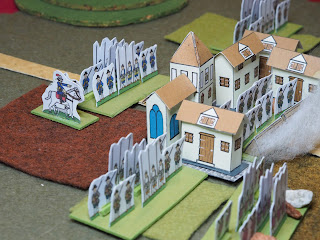 Eventually the Parliamentarian fire proved to much for them, and the Royalist dragoons fled from their barricades. 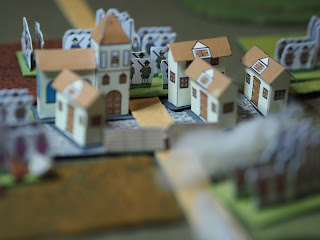 But more Royalist foot moved to replace them. And Royalist units moving around to the east and west of the village were taking some of the sting out of the Parliamentarian assault. 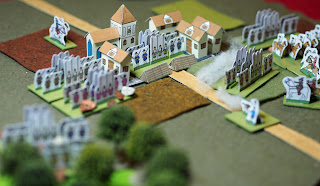 A unit of Parliamentarian foot broke. 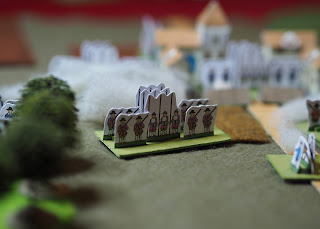 The reserve foot didn't hold the village for long. Its morale wavered under fire, and its own firing quickly depleted its powder, so Lord Standing was obliged to withdraw it back into reserve and bring a unit from his right flank into the village to replace it. This unit had more fight in it. 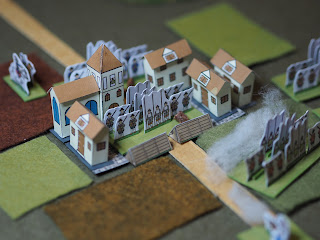 To the east of the village the Parliamentarian horse broke,but the Royalists horse hared off in pursuit and Lord Standing was not to see them for the rest of the day. 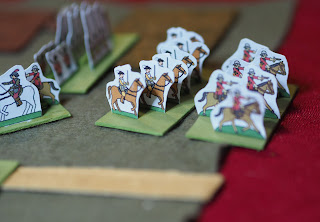 Sir Thomas tried to rally another of his foot units, but to no avail. It joined what now seemed to be a general retreat. 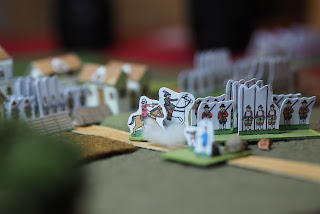 He switched his attention to directing the artillery, now the only force he had putting any pressure on the village. 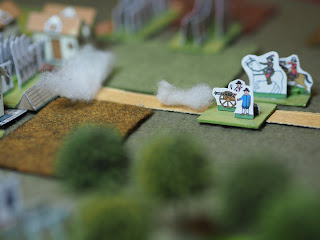 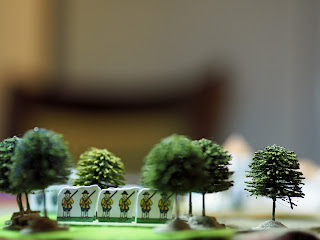 The only real fighting going on now was to the east of the village where infantry of both sides were engaged in a fierce melee. 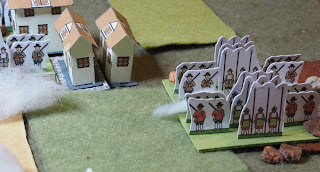 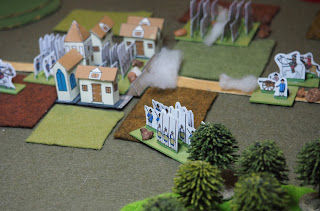 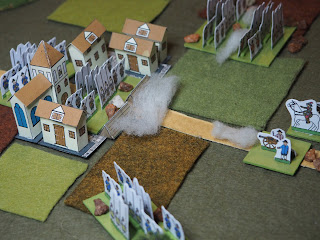 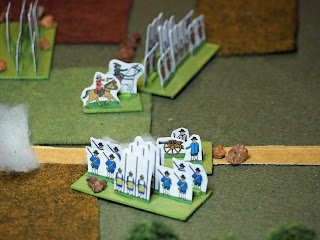 With their guns lost, that was really the end of the battle. The remaining Parliamentarian foot fled the field, leaving the Royalists in command of the village. 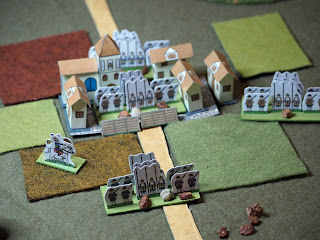 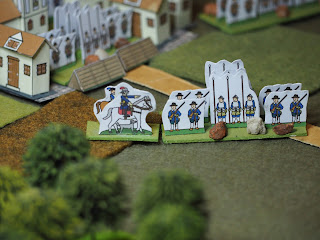 This was a fairly easy Royalist victory, and I would agree with other people who think that this scenario is very much weighted towards the side which moves first; the objective is the village so the first side to get into the village is going to be at an advantage. Choice of rules and mix of troops might alter this a little, but it holds true in principle.

I have boiled most of the combat down to rolling 2D6, looking for hits on a 4-6, but with variations as to how the dice are read to trigger other effects, limitations or advantages. I'll write these up in dues course but, for example, horse get 2D6, but if they get a double then they score an additional hit for impetus. If either of the dice are a '1' then they lose that bonus for the rest of the game. This covers 'average' horse. More impetuous Royalist horse doesn't lose the bonus ever, but if they roll a double, or destroy the unit facing them, then they automatically take one hit, reflecting increasing disorganisation or a wild pursuit. This is, in fact, what happened in this game; the Royalist horse were on four hits when they destroyed their Parliamentarian opposite numbers. The extra hit destroyed the Royalist horse as well, representing them chasing off after the fleeing Roundheads. I am working on some ideas to reflect disciplined Parliamentarian horse as well, but I'm still deciding what effect I want to achieve there. A variant of the 'double' mechanism could also be used to reflect foot whisc is shot-heavy or pike-heavy as well; it gives results which are not quite as extreme as adding or subtracting whole dice.

Finally, all pictures were taken with my new camera, although the lighting could have been better. Since I didn't start playing until after 9pm the game was lit by the normal room light, plus a desk-lamp. The results were still pleasing, though, and I'm keen to try it out with some 'real' figures at some stage.

Follow the rest of the scenario refights HERE
Posted by Kaptain Kobold at 09:12