Pikes and Hoplites - Chaeronea 338BC

After the success of our big HOTT game last week we played a big DBA 3.0 game last night the Battle of Chaeronea, which saw a Macedonian army under Philip II defeat a Greek coalition.

I think there were 64 elements on each side, in four commands of 16 each. The Greeks were predominately spears, whilst the Macedonians had pike. The Macedonians also had a strike force of knights, of course - the only significant mounted on the table - and both sides had a sprinkling assortment of psiloi. On paper this looked to be an uninteresting infantry fight, but we were interested to see how the new chrome in DBA 3.0 worked with this classic fight of powerful deep formations vs a long shield-wall.

Both sides had commands that reflected historical compositions, but were allowed a free deployment. The latter was irrelevant, as after much discussion the Greeks, deploying first, went for an historical setup, and the Macedonians followed suit in response.

The Greek plan was to be proactive, and attack with the Thebans on the right, supporting with the right-centre and holding with the left-centre and the Athenians on the left. I had the Athenians on the left, and planned to use the pile of psiloi I had in my force to threaten the Macedonian right. They also had a mob of psiloi, however, so an interesting fight would ensue on the mountain slopes which made up that flank.

Here's the troops set up, viewed from behind the Greek left flank. 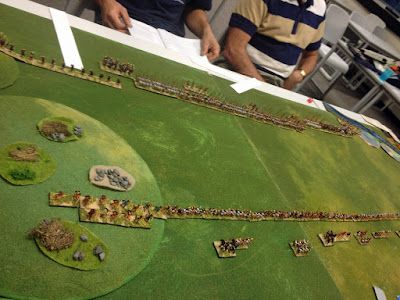 With a think line being faced by an enemy capable of punching through, the Greeks wisely deployed reserves. 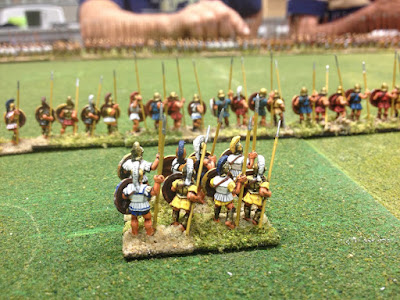 The Macedonian phalanx looked imposing even at a distance. 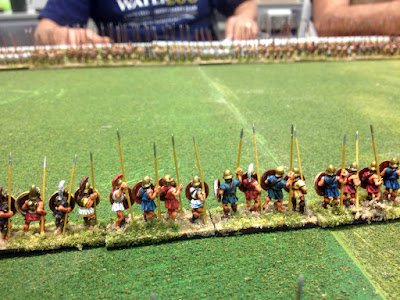 Once again I brought the selfie-stick to the party, along with a fish-eye lens, to capture these pictures of the game in progress. 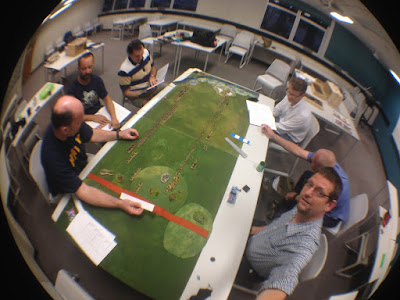 The brown line in the foreground marks the edge of the playing area and is not a road. 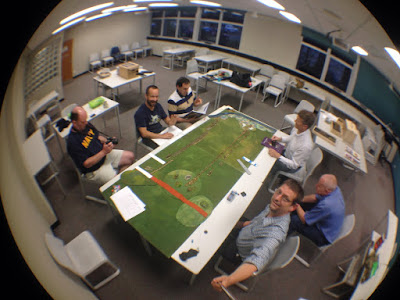 True to form the Macedonians advanced. 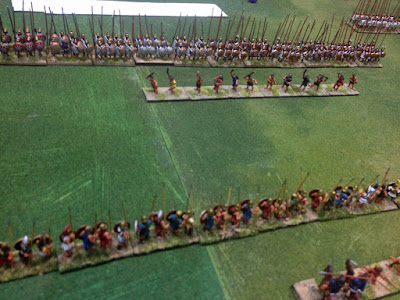 A psiloi battle on the Greek right didn't amount to much as both commanders spent most of their attention on the main body of their troops. The anticipated Greek attack on this flank stalled in the face of a PIP drought, which Alexander's horsemen were then able to exploit. 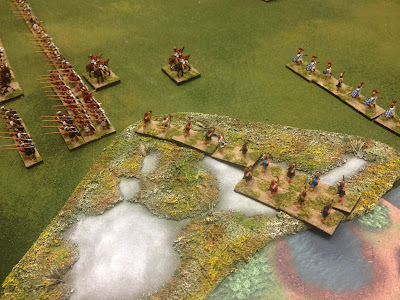 On my flank the psiloi battle got going in earnest. 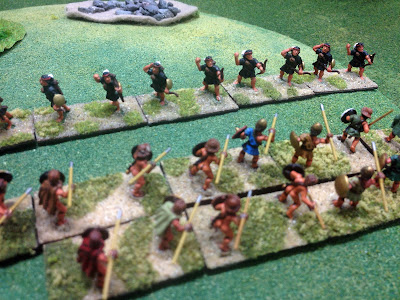 The Greeks got the worst of it initially, having made the error of not deploying wide enough and so getting outflanked. However the command and control difficulties incurred by the troops being on a difficult hill meant that Ralph, commanding the Macedonian right, was unable to really exploit this success. 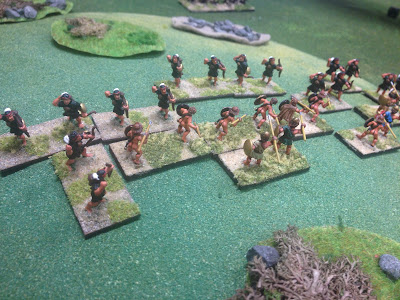 The pikes get closer ... 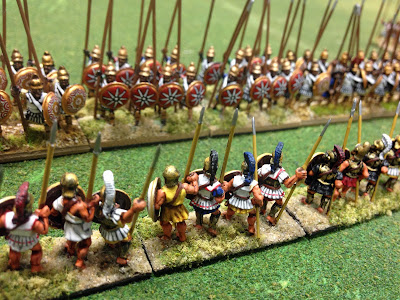 In the centre Caesar tried the Napoleonic tactic of preceding his columns with a cloud of skirmishers. I don't really think it achieved much, but it was entertaining to watch. 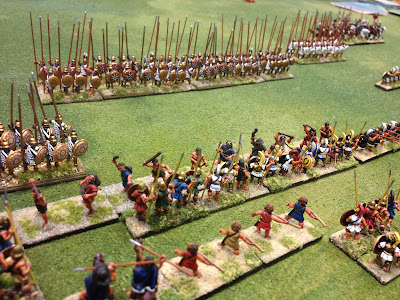 On the Greek right Alexander was very much having things his own way. 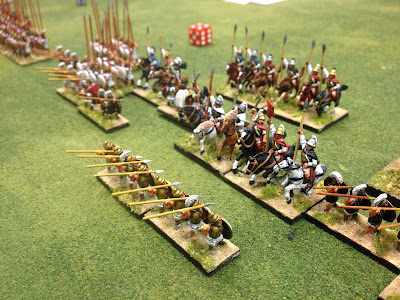 And all along the line the Macedonian pikes were pushing the Greeks back. 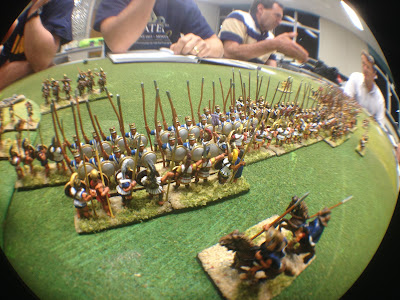 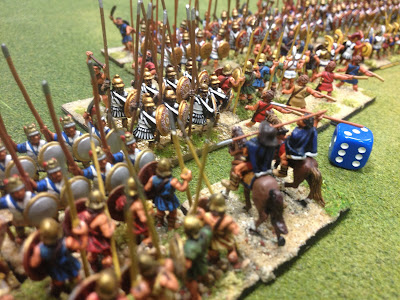 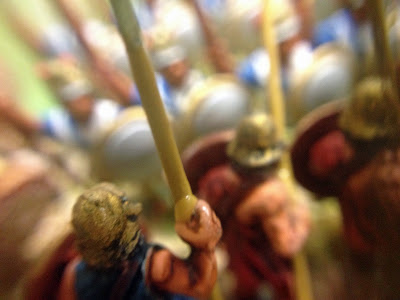 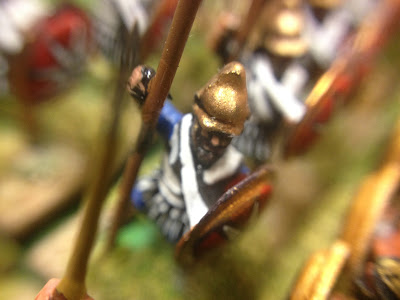 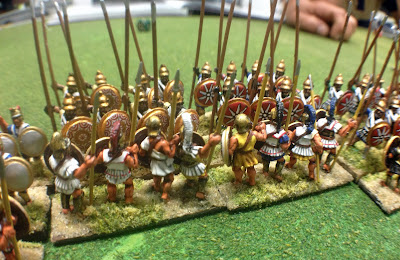 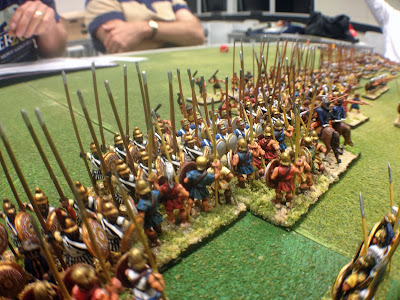 A few breakthroughs were made, and a couple of Greek commands broke. That spelled the end for their army.

I had a cunning plan involving my psiloi on the left flank, but I didn't notice the possibility until towards the end of the game and never got chance to implement it. So my troops had to resort to flashing their bums at the victorious Macedonians before heading into the hills. 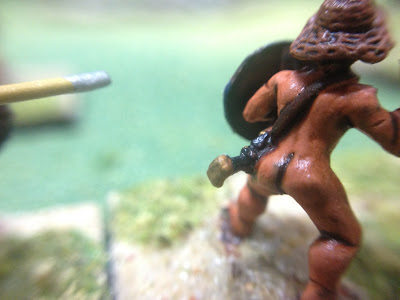 This was a great game. The idea of a spear vs pike slog initially struck me as a bit of a snore-fest, and would have been under earlier versions of DBA. DBA 3.0's additional chrome made for an great little game on a grand scale.

Thanks to Peter for organising the game as well as providing all (or at least the lion's share) of the figures.

And here's Ralph's take on it.