With a new combat system to try out for my ECW variant of the One Hour Wargames rules, I moved straight on to the next scenario in the 'One Hour Wargames' book. This was is simple, but fun, albeit somewhat random. the field is empty except for a hill in the centre, which is the objective for both sides. Both armies start with one of their six units deployed. The other units appear randomly throughout the course of the battle as they march to the sound of the guns, or fighting, or whatever. Thus you never quite know what troops you will have available, or when.

Since the main changes to combat were with cavalry I rejigged my army lists generation rolls; I gave both sides four units of horse, with the Royalist horse being impetuous. I then randomly determined what the other two units would be, but in fact both sides ended up with units of pike and shot.


The Battle of Griffins Hill

As 1643 drew to a close there were a number of small skirmishes in the county of Midsomer. One of these saw the antagonists both trying to seize some key high ground near Causton. Parliamentarian horse advanced from the north,  Royalist foot from the south. 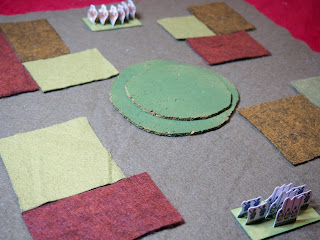 More troops arrived. The Parliamentarian horse swung to the east of the hill, as their foot arrived and moved to take it from the Royalists. 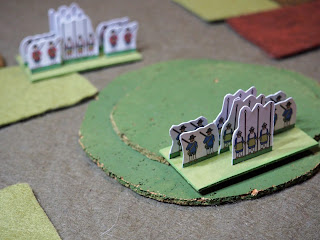 A cavalry fight ensued to the east of the hill. 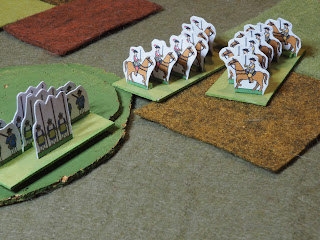 And fierce footing took place on the hill itself. 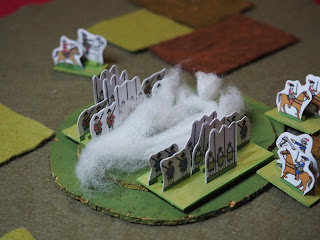 The Parliamentarian horse routed, pursued by their Royalist opposite numbers. 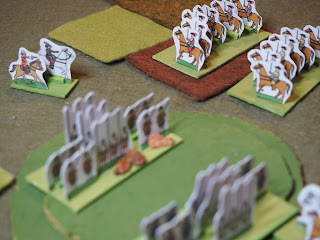 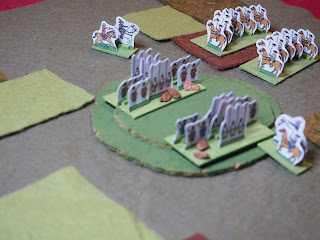 To the west of the hill more Parliamentarian horse arrived.

On the hill itself the fight had developed into a furious melee, which saw the Parliamentarian infantry rout. 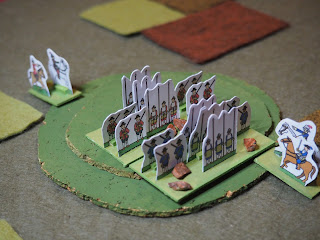 Another troop of Parliamentarian horse arrived. Things were not looking good for the isolated Royalist foot. 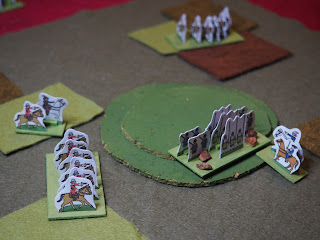 They formed a hedgehog to resist the cavalry assault, and held off attack after attack, despite being battered after the earlier fighting. Their hilltop position and their pikes saved them again and again. 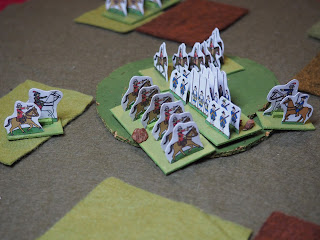 More horse arrived on both sides ... 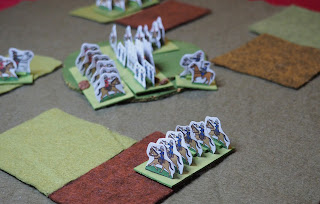 ... and one troop of Parliamentarian horse found itself engaged to the front and flank. 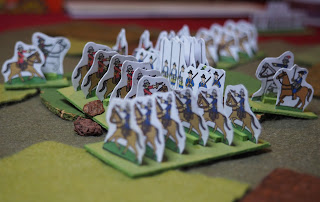 Another shot of the furious melee around the hill. 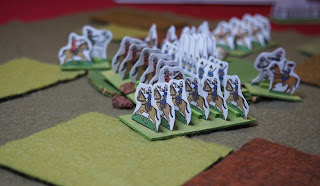 The melee ended with the Parliamentarian horse breaking ... 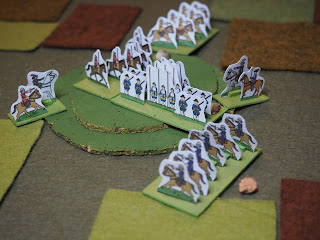 ... followed by the Royalist infantry. The surviving horse of both sides became engaged. 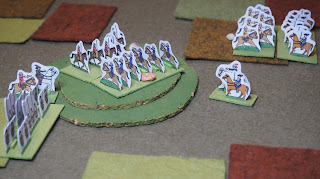 To the west of the hill Royalist horse engaged the remaining Parliamentarian infantry unit, preventing it from moving to the hill. 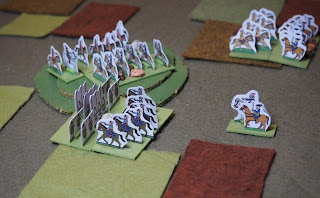 The Parliamentarian horse on the hill broke and were, once again, pursued from the field by their Royalist opponents. 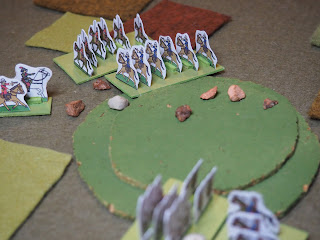 This left two continuing melees one to the east and one to the west of the hill. At this point, night fell, leaving neither side in clear control of the objective. 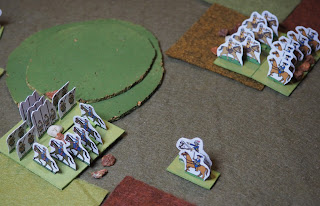 The game played out very quickly, partially because, at any given time, there weren't that many units in play. The Royalists were unlucky with bringing troops onto the table; half of their troops didn't arrive until near the end, and one of their foot units never turned up at all. This was offset by the luck their foot unit had on the hill and saving every hit scored against it by the attacking horse for several turns. Otherwise this game would have been a relatively easy Parliamentarian victory.

I think the basics of the combat mechanism are sorted, so in my next games (which may or may not be part of the scenario project) I will maybe try out foot with different pike/shot ratios.

Follow the rest of the scenario refights HERE
Posted by Kaptain Kobold at 09:11