Napoleon is not feeling so clever now, as enemy troops march all over his country. But there are still battles to be had. And there's still Black Powder to fight them with.

Last night's game involved an outnumbered French column trying to get its heavy artillery along a road to the safety of a village, pressed on two sides by hordes of Russian cavalry and infantry

Here's the village, with the French in front of it - cavalry close to, and some untested infantry escorting the guns. That's Russian cavalry (commanded by me, naturally) on the baseline. 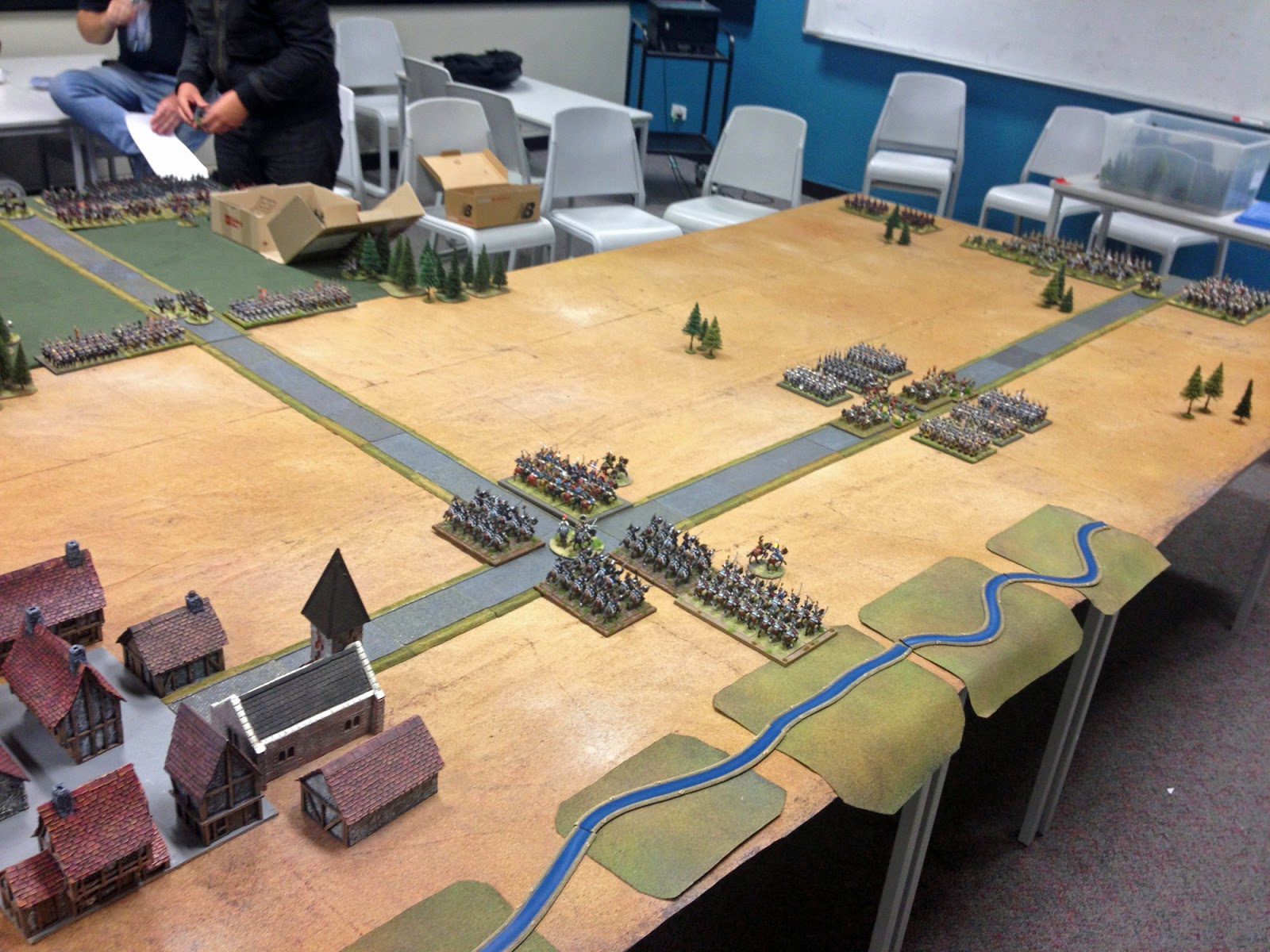 A column of massed Russian infantry comes from the other direction, with only a thin blue line to stop them. 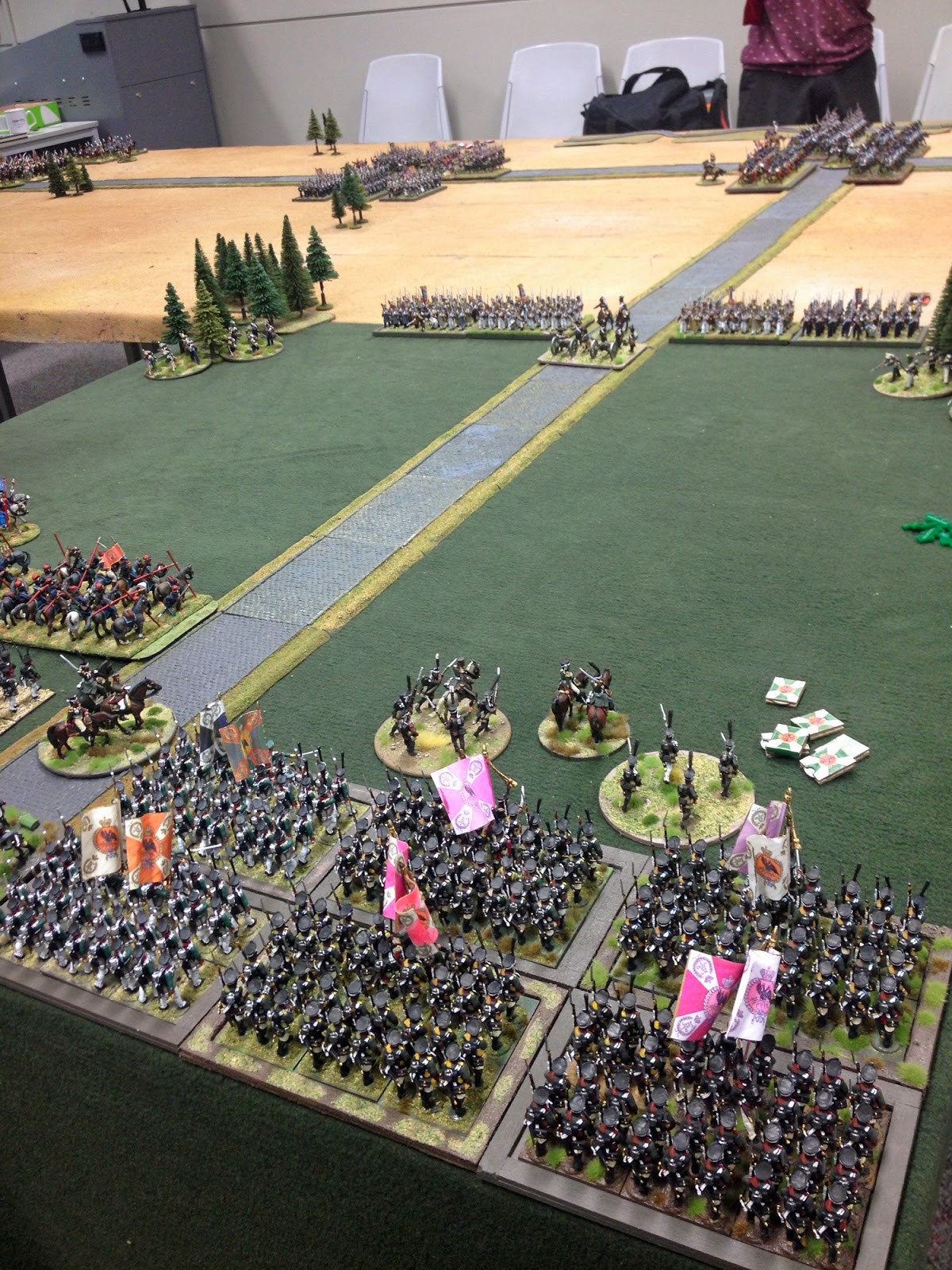 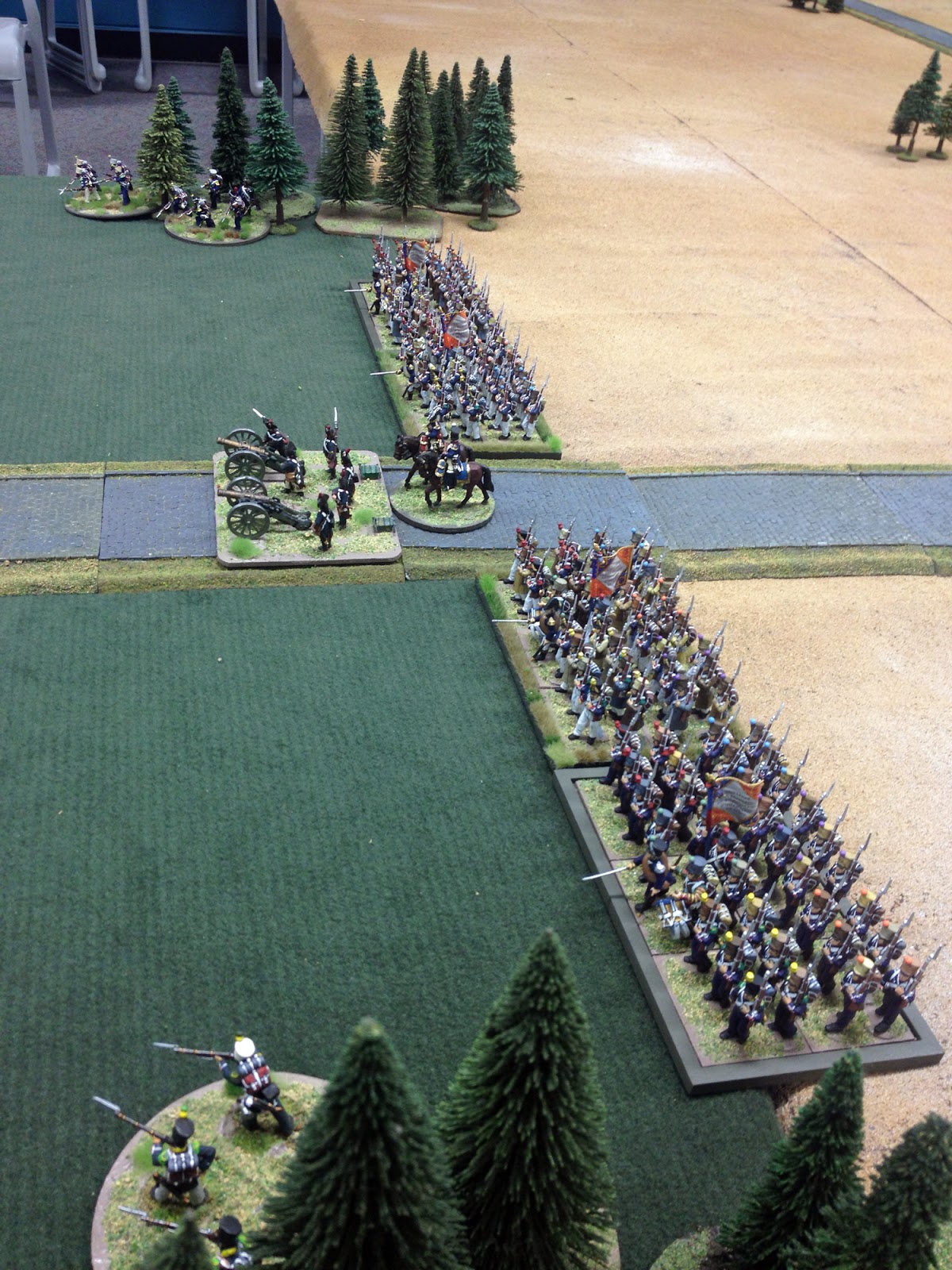 .. as the Russian cavalry advances. 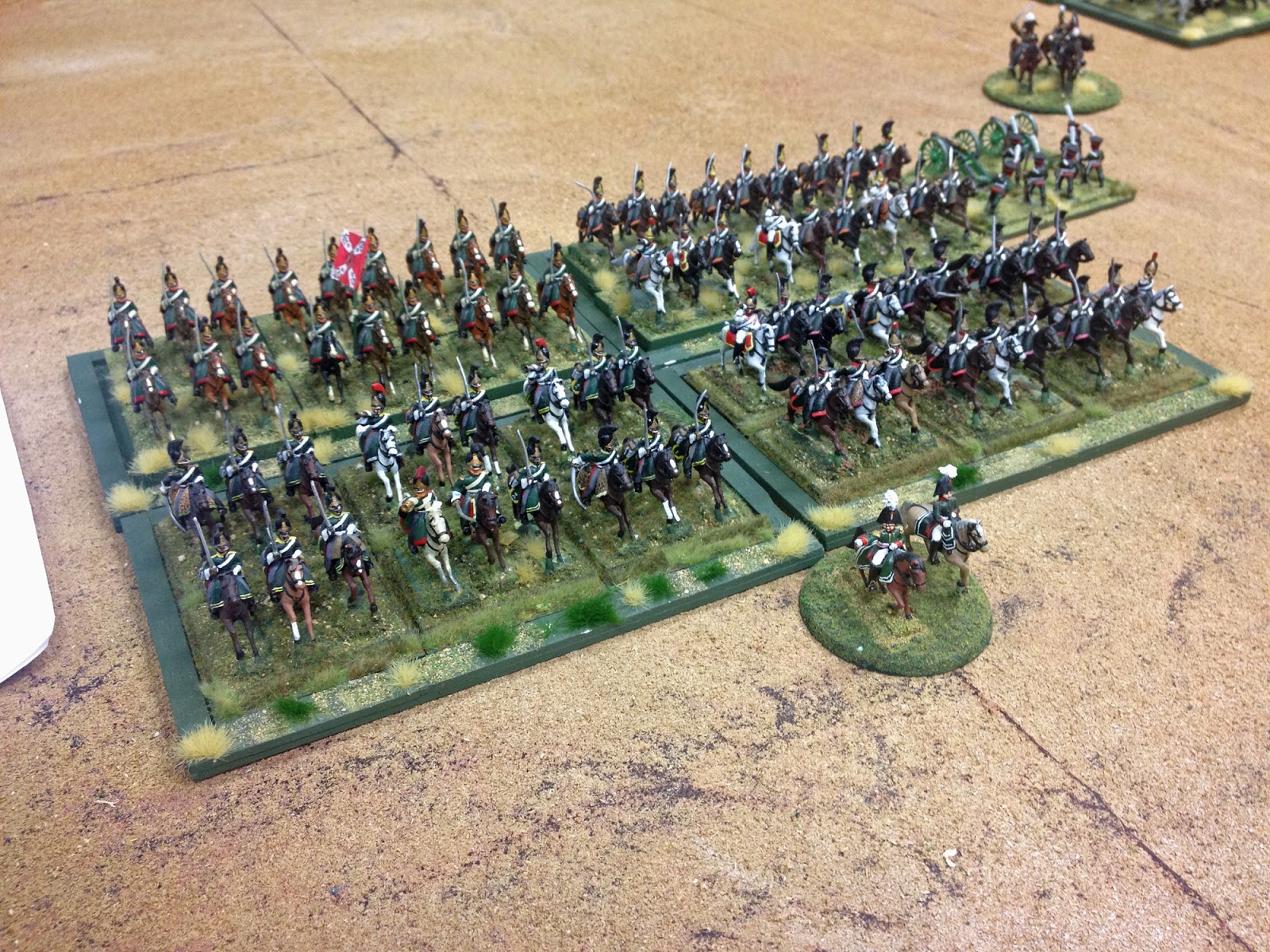 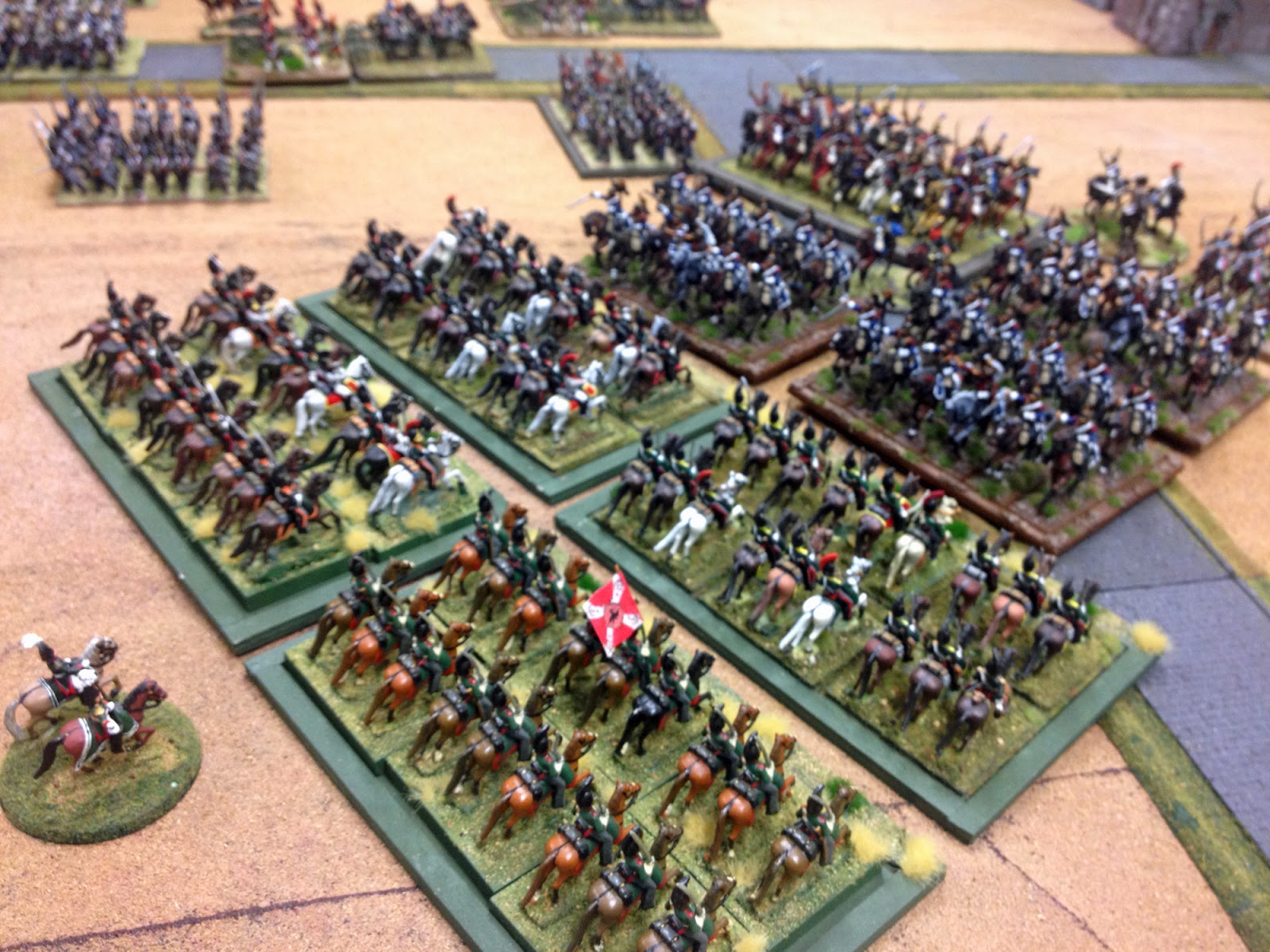 The Russian cavalry thunders back the other way. 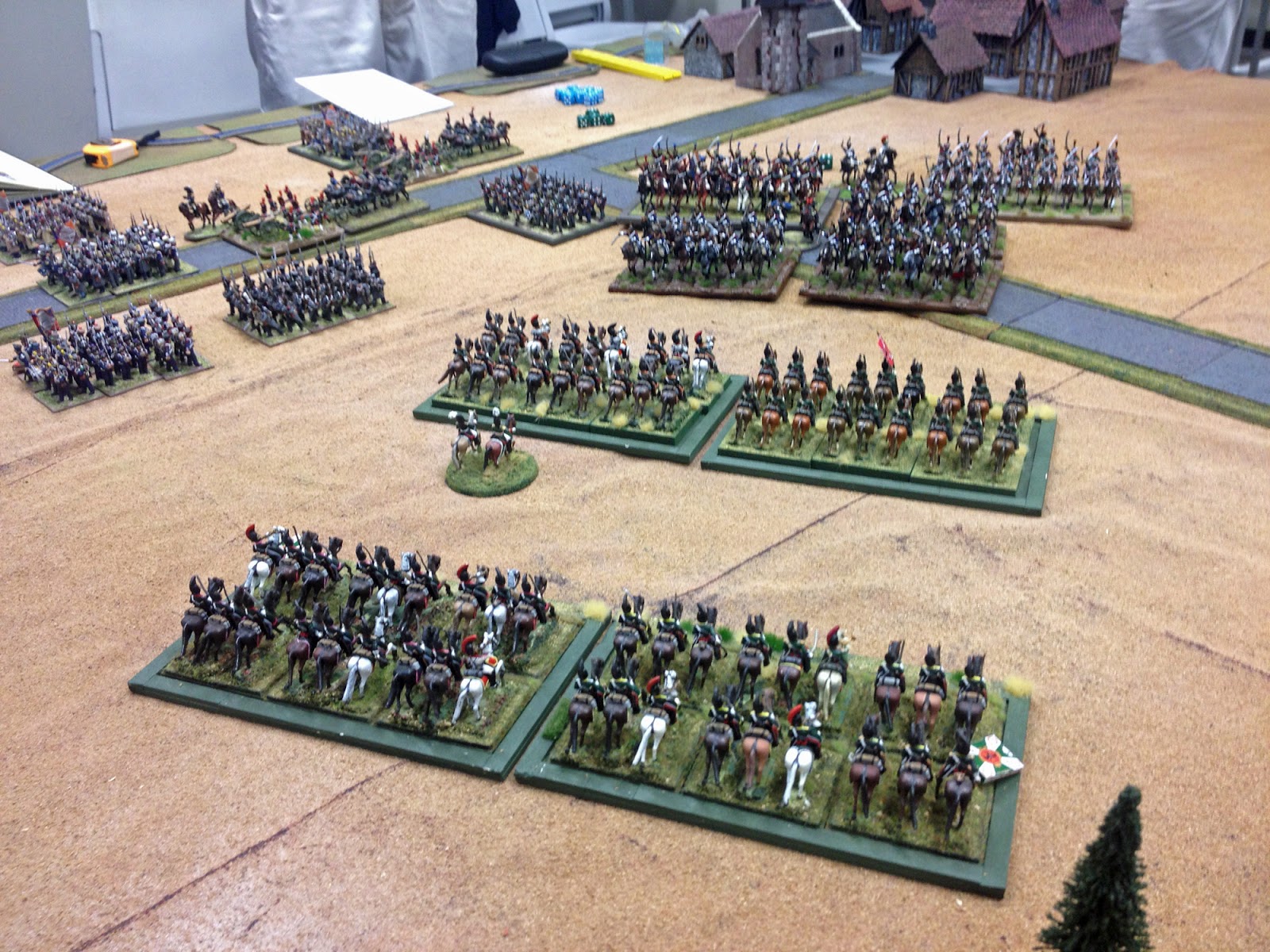 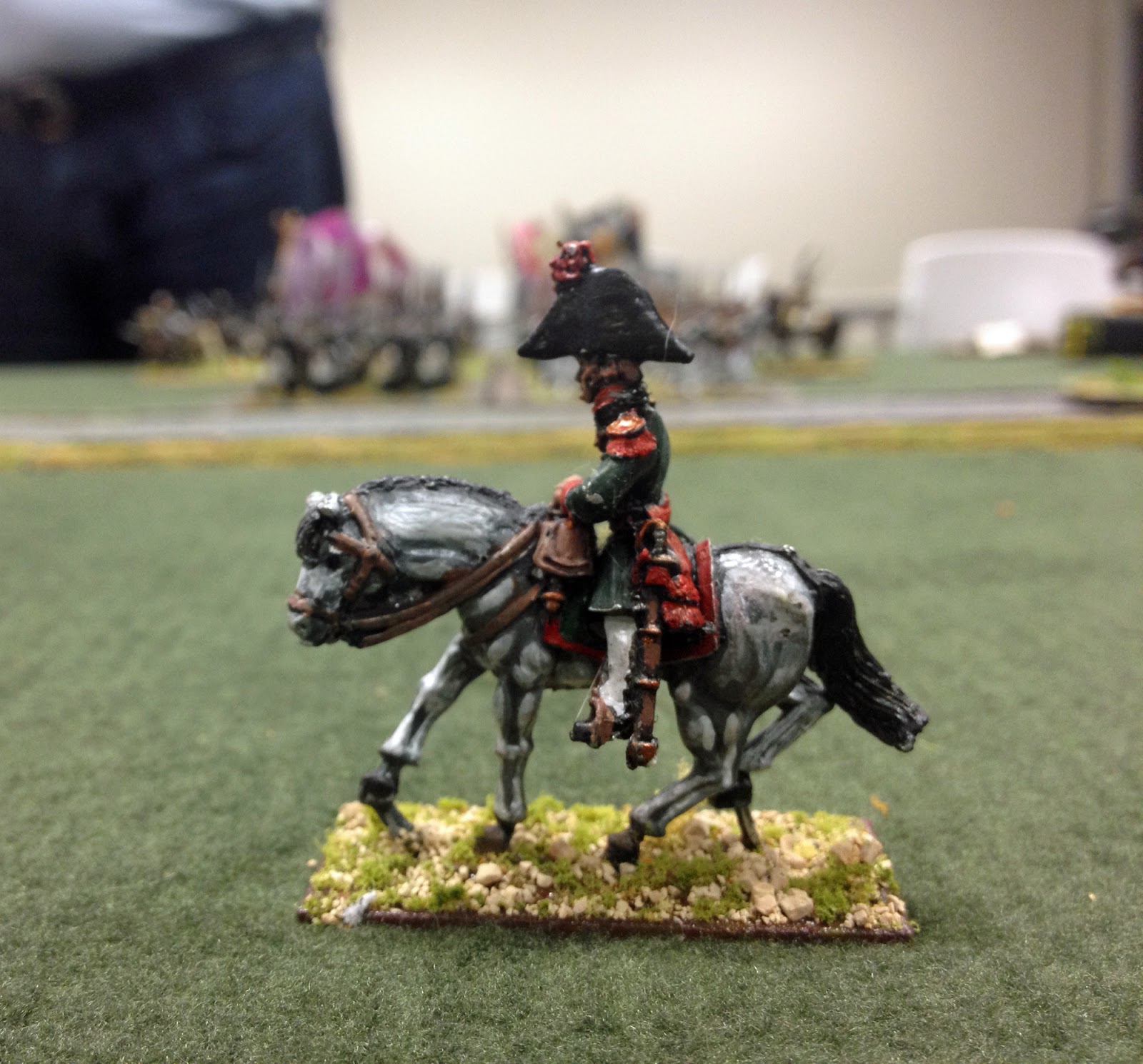 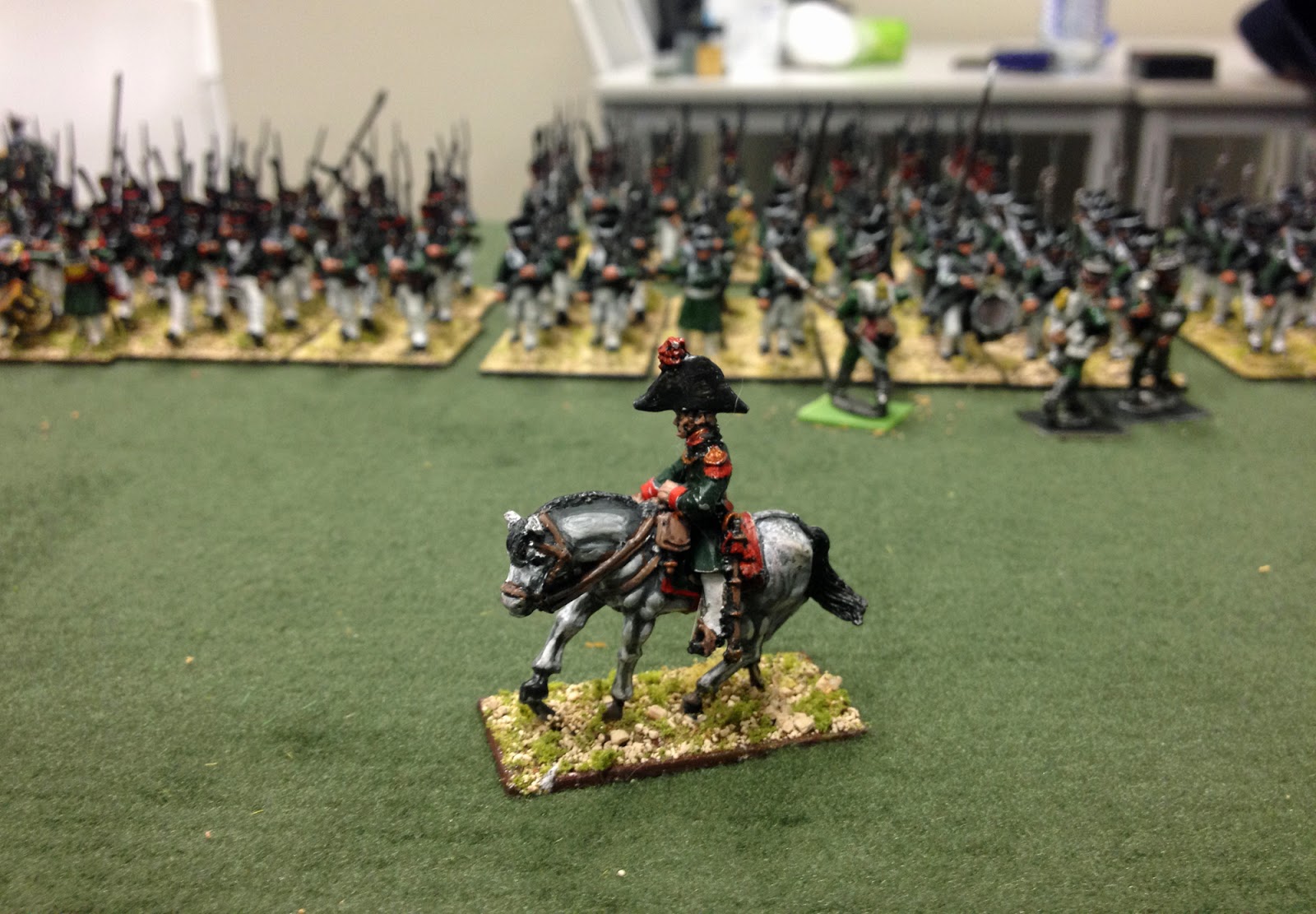 ... but his only cavalry are some very dodgy looking Cossacks. 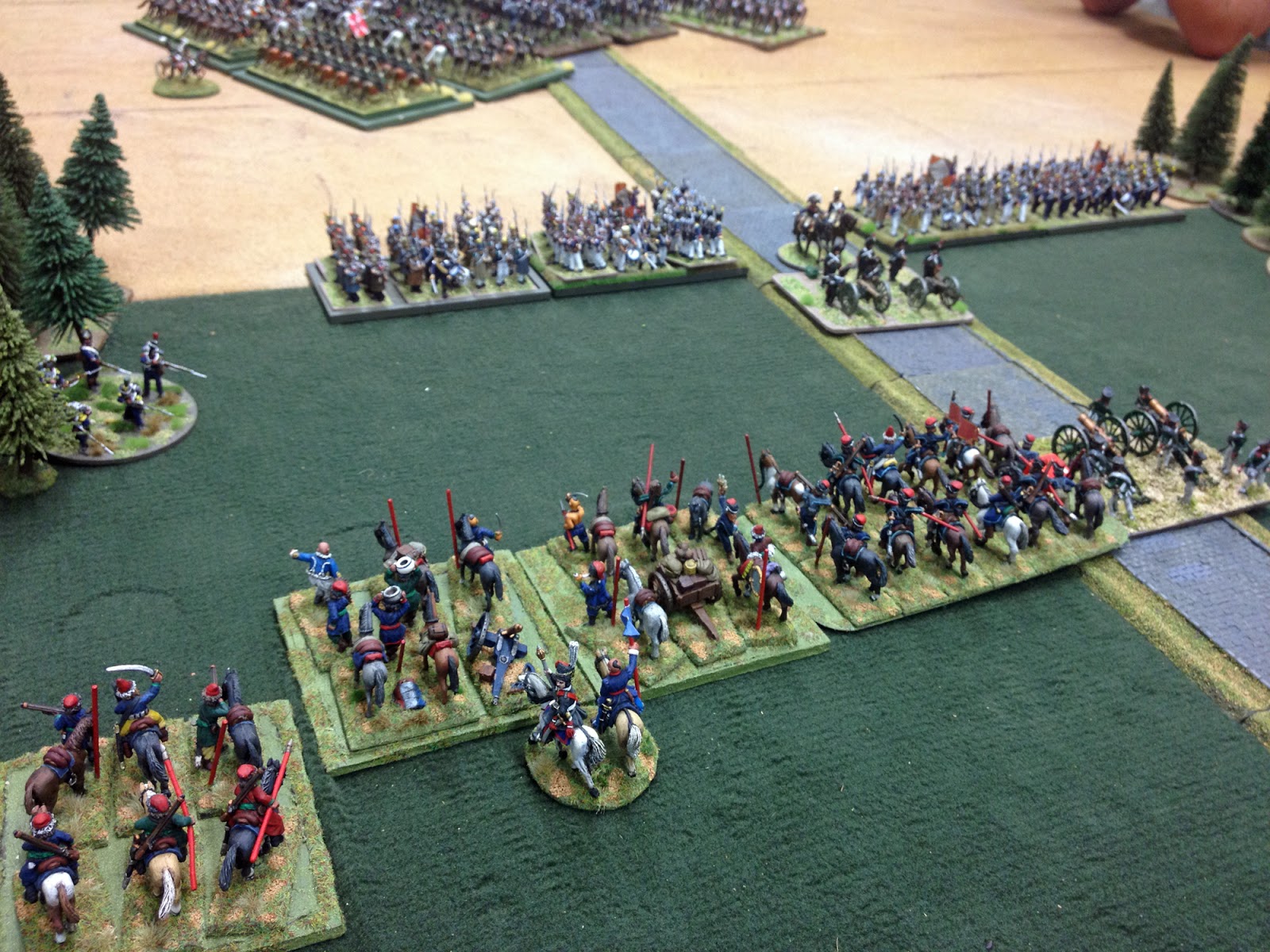 The Russian cavalry put on a fine display of formation retreating. So fine that they convince their own heavy cavalry, over on the road, to retreat in sympathy. The Russian heavies (unpictured and now erased from history) did nothing but advance slowly along the road, before turning and fleeing back to their baseline and then refusing to move. 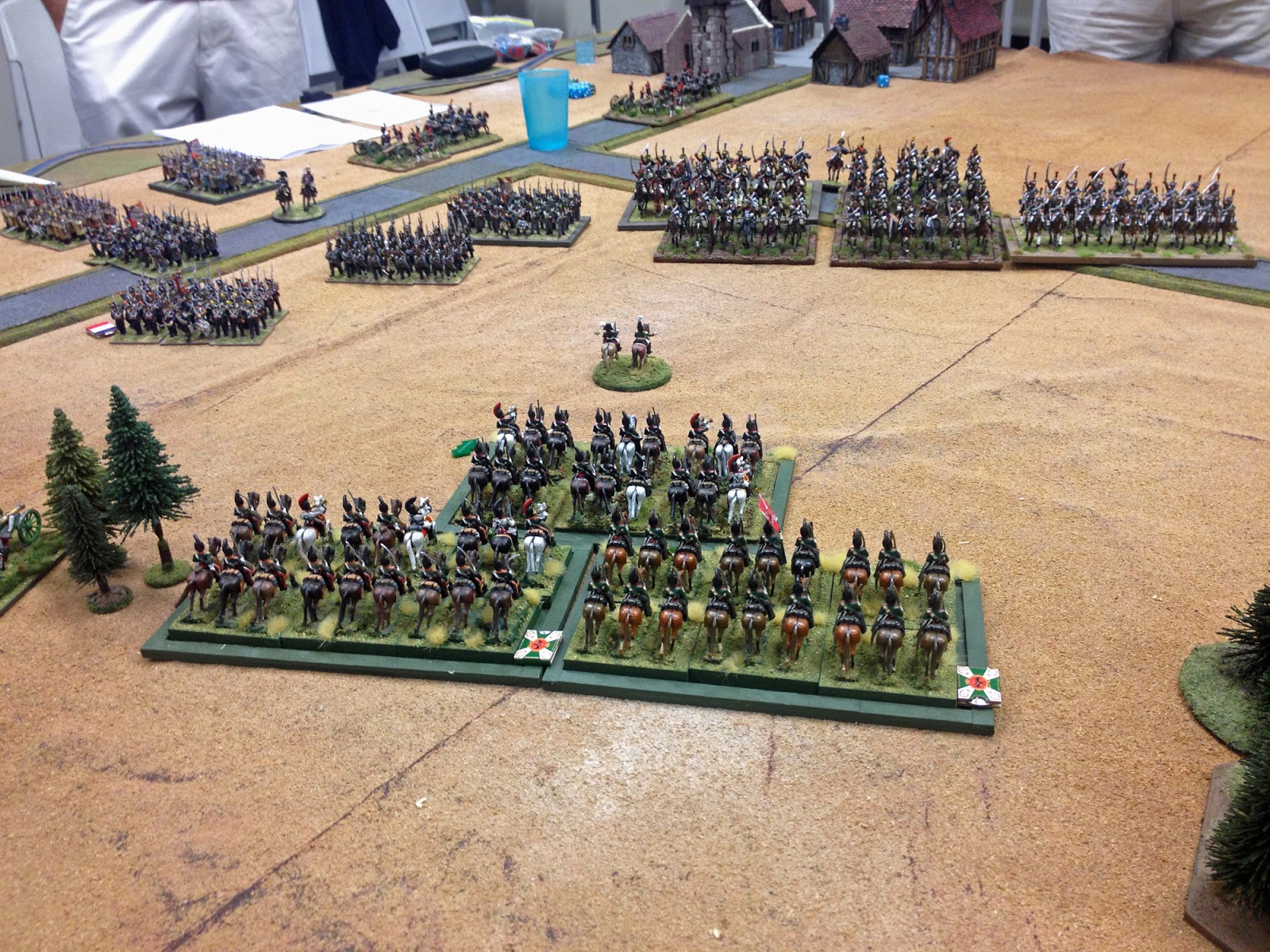 The Russian horse-artillery pounds some French infantry who, disordered, becomes cut off from the rest of its force. 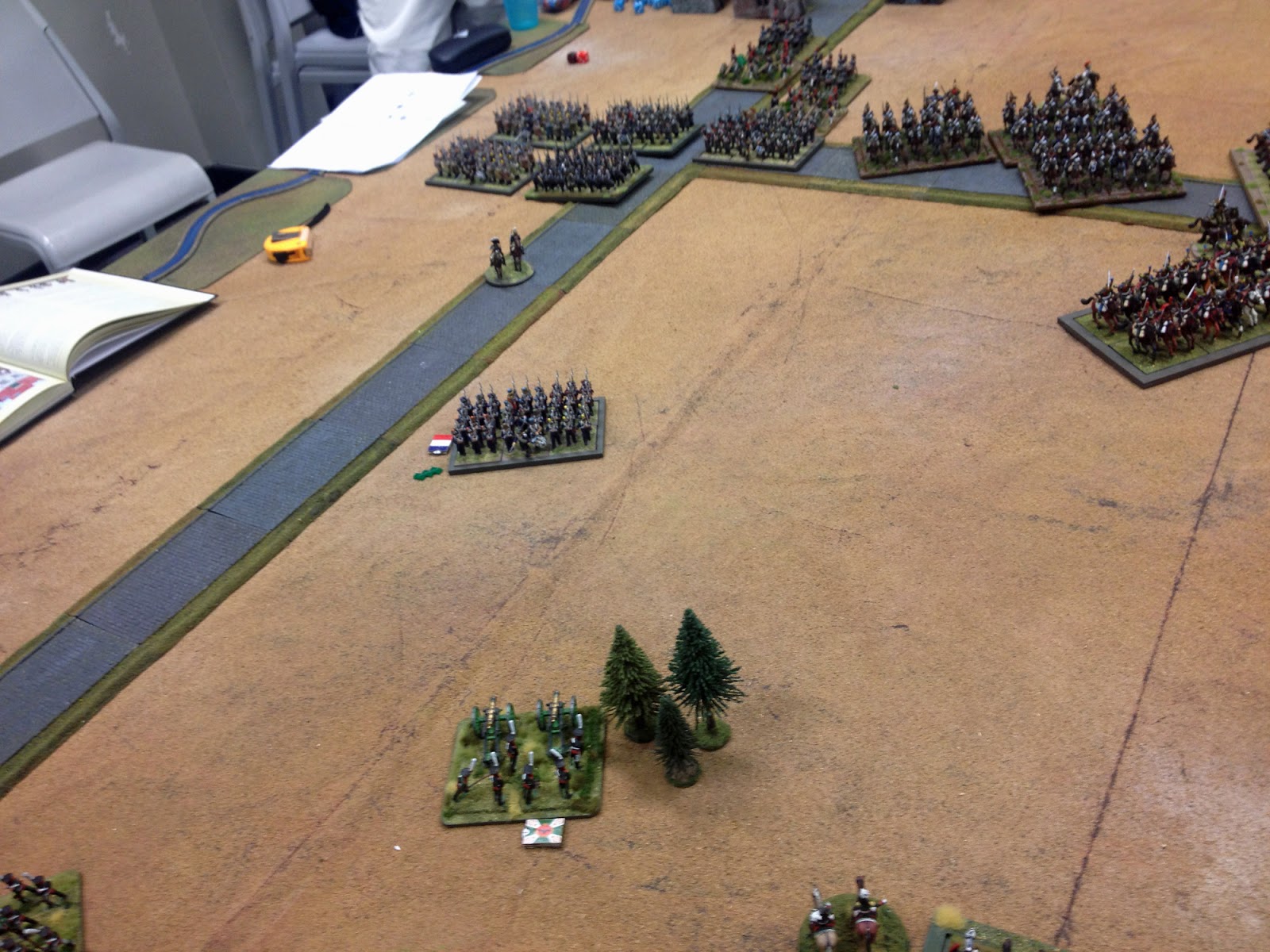 The artillery can't quite finish them off, though.

The other flank is now a big mess as, emboldened by their success against the Russian cavalry, the French organise an attack. 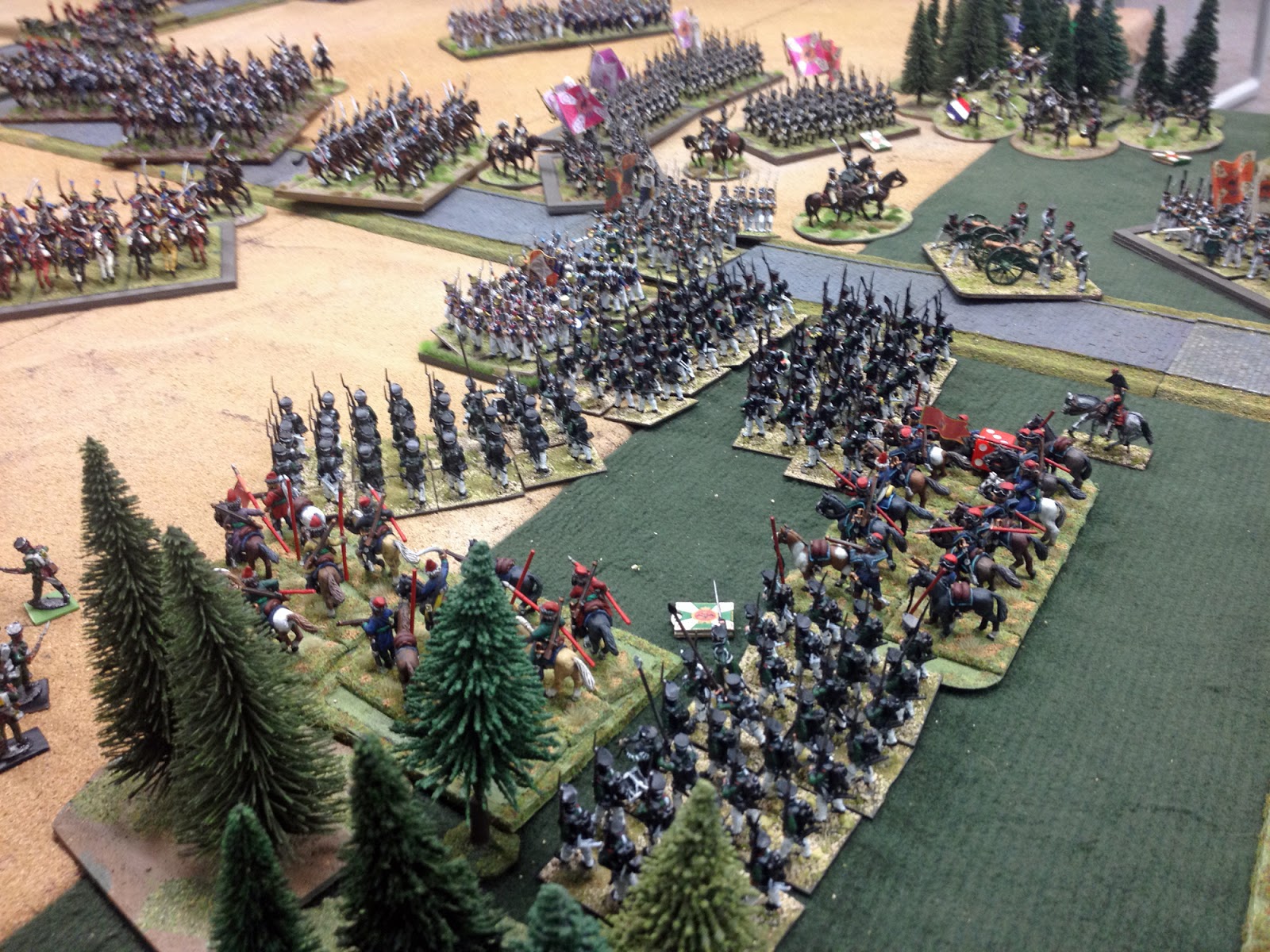 The French slowly dragged their guns towards the village, hampered by mud and broken axles, but unhindered by anything that looked like enemy troops. When they got there they discovered that (i) the village was full of Russians and (ii) Napoleon had abdicated. So they dumped the guns in a swamp, and the game was over.

This was not a good night to be the Russian cavalry commander.

Update: Ralph's report is stronger on historical context and detail.
Posted by Kaptain Kobold at 07:01