I'm currently taking part in a members exhibition at a local community art gallery - just two modest sized photos relating to the exhibition's 'Landscapes' theme, but it's always fun to be involved in these things, and it helps support the local arts community.

As part of the deal on taking part in the exhibition I get to 'gallery sit', which means manning the place for half a day. Today was that day - a Saturday afternoon spent tallying visitors and generally being helpful. I decided that since it was likely to be quiet I'd take along some soldiers to play with; it keeps me amused and acts as a talking point if nothing else.

Since I knew I might have to park a distance away from the gallery (city centre on a Saturday - you know how it is) I wanted something that was easy to carry. So I opted for my 6mm South American Wars of Liberation stuff using my Liberated Hordes HOTT variant. I could easily fit two armies into a small plastic box, add a few pieces of terrain, a felt cloth and the rules, lob them into a bag and away I go.

Since I had the OOBs already sorted and documented, and a terrain set-up devised, I went for a refight of the 1818 Battle of Maipo.

As it was, when I arrived at the gallery the lady who organises things and her husband were there setting up the gallery's new computer, so I ended up spending the first hour offering my technical assistance. But eventually I got started on my game, and set everything up.


The cloth is about 15" square, but my figures are on 25mm frontages, so take up less width than a conventional HOTT army on, say, 40mm frontages. I did use the normal 25mm to 100p groundscale, though - effectively doing the DBA 3.0 'base-width' movement thing.

The armies were as follows:

In essence the Patriots have numbers, but a lot of low quality troops, whilst the Royalists must deal with being outnumbered and outclassed in cavalry, but have a good core of infantry. 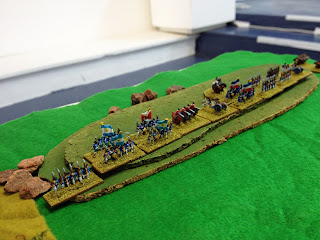 The Royalists. As in the actual battle, one group is isolated from the main body. 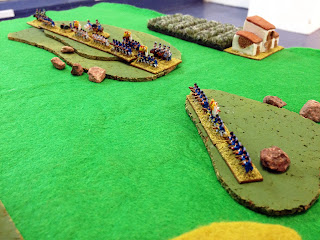 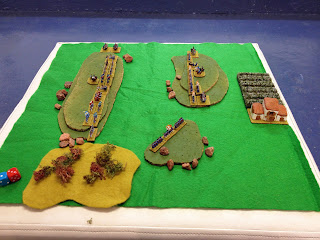 And a helicopter view. 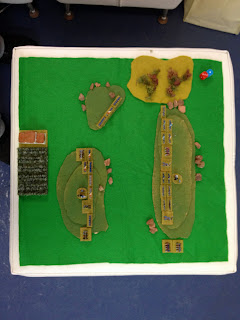 The Patriots opened the battle with an advance by their elite Horse Grenadiers. With only militia cavalry facing them, this was going to seriously compromise the Royalist right so long as the rest of the army could be pinned by the rest of the Patriot forces. 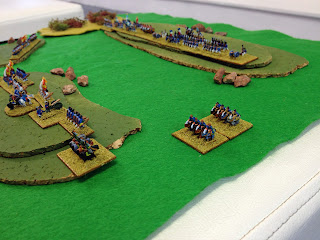 The Patriots advance. A Royalist attempt to worry the Patriot left flank with an infantry unit was defeated - you can see the fight at the bottom of the picture. 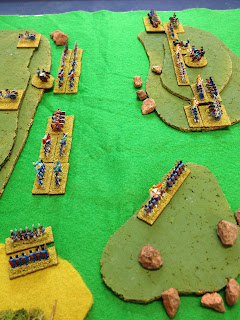 The Patriots hit the Royalist militia, and are repulsed. 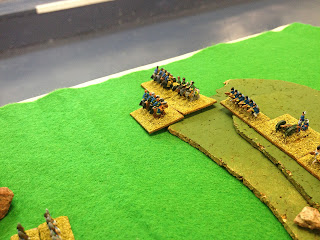 The armies advance into firing range, and much musketry ensues. 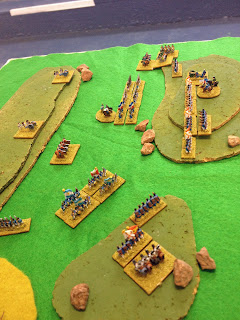 Disaster! An element of Horse Grenadiers is routed by the Royalist cavalry. 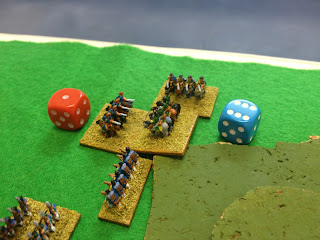 But the cavalry fight continues. 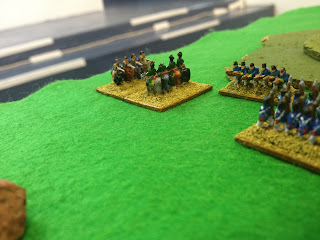 The Royalist left continued to hold off Patriot attacks throughout the game. 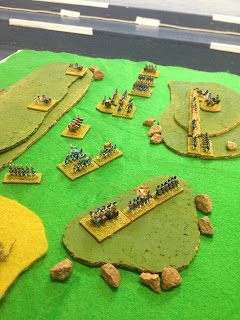 The Horse Grenadiers routed the militia cavalry, but were shot down by a Royalist infantry unit. 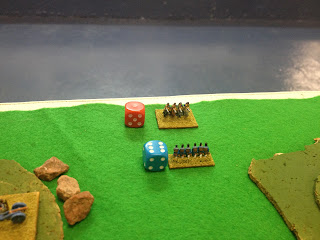 The mid-game consisted of lots of musketry as both sides had very poor PIP rolls. This favoured the Royalists; the Patriots were deployed in columns for a close-assault that they just couldn't press home, and the actual firing lines were about the same length because of this. With their army consisting of so much militia infantry, the Patriots couldn't stand up to a sustained firefight, and casualties started to mount. Low PIPs meant that they couldn't redeploy their superior numbers of artillery where they were needed either.

Eventually the Patriots pressed home their advance against The Royalist's elite Peninsular veterans. 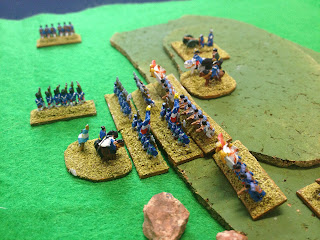 In addition they finally pressed home an assault on the isolated Royalist left flank. 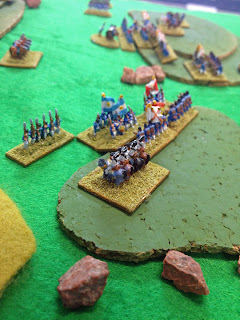 Things did not go well - a Patriot attack column routed. 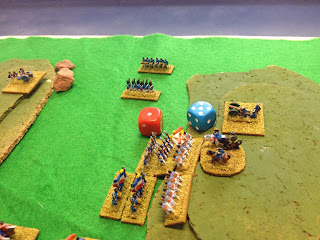 And another was outflanked and destroyed. 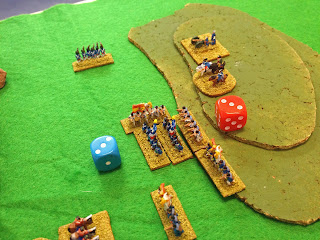 This pushed the Patriot army to their breaking point, and the army fled. Here's the battlefield at the end, with the Patriot left and centre pretty much gone. Only their right flank was still fighting. 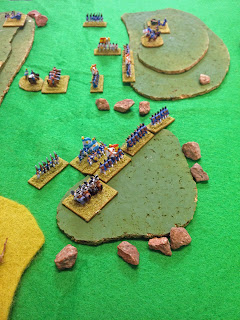 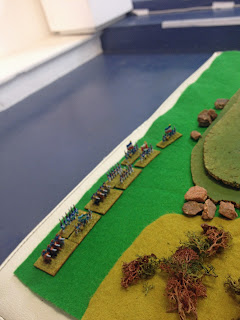 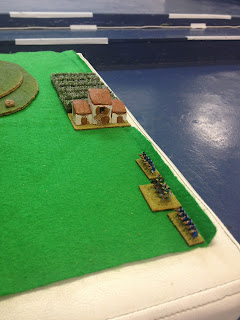 The Royalists were very very lucky to win this. They got two or three blinding combat rolls in their favour early on to defeat the elite Horse Grenadiers. This left the Patriots without their main striking force, and having to rely on numbers that poor PIPs and a column formation meant that they just couldn't bring to bear. Caught in a firefight, their poorer quality troops were broken up before the attack could really get going.

The game attracted bemused, but friendly attention from visitors to the gallery, and packed away in no more than five minutes ready for the trip home.

A good afternoon, well-spent. I have some more pictures of the game done on my 'real' camera, which I will post another day.

And 'Revisited'? As I say, I had all the information to hand to refight this battle - I've done it before.