Today, New Year's Eve, is the 150th anniversary of the first day of the Battle of Murfreesboro (or Stone's River). So what better way to while away the evening than playing the Battle Cry scenario for it. Yes, I could have come up with a scenario for a more conventional wargame, but I was working today and wouldn't have had the time to set it up and play it even if I had done the necessary reading. Battle Cry gave me the battle, albeit abstracted, straight out of the box. And in a format that my wife would play as well.

Ideally I would have liked to have used my 6mm figures, the stands for which as based for use with Battle Cry, but I thought that Catherine would struggle to distinguish units in the dim light of our dining-room, so opted for the less attractive (from a wargames point of view) figures from the game itself. 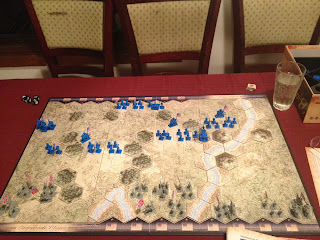 I took the Confederates, who move first. I got off to a great start, force-marching an attack on the isolated Union right. Unfortunately I inflicted too few casualties and too many retreats: 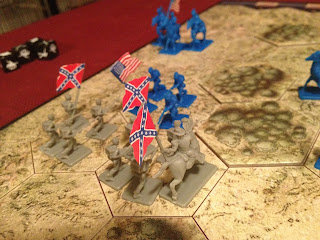 But I also got off to a flying start in the centre: 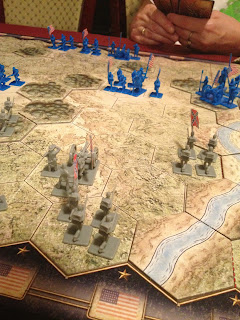 Indeed the Union army seemed to disperse before me: 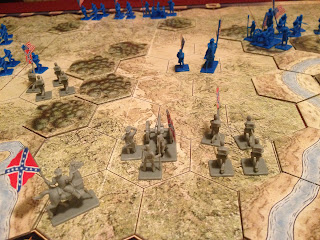 Soon there was a great big hole where there had been blue troops before. But I wasn't quite in a position to exploit it. And the Federals had artillery trained on me: 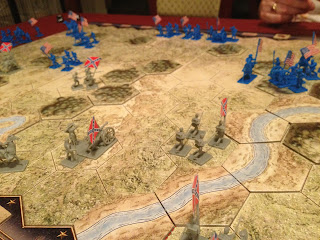 Disaster! The Union countered on their right and the Confederate troops just vanished: 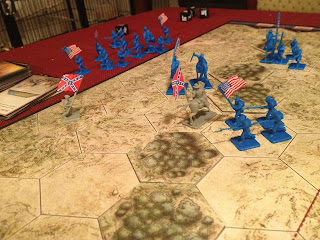 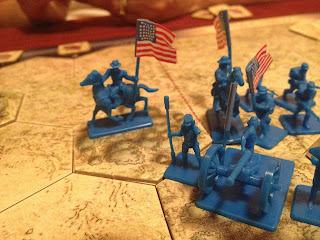 The Confederate vanguard fell, as the Union established a strong line by the river: 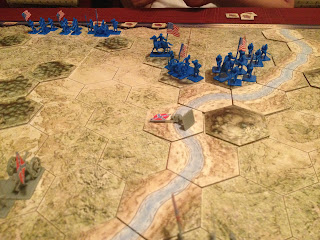 General Hardee was feeling lonely on the Confederate left: 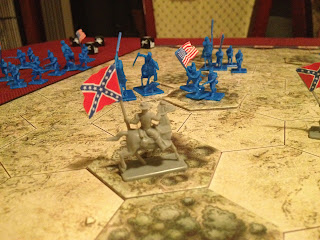 But troops from the centre swung round to support him: 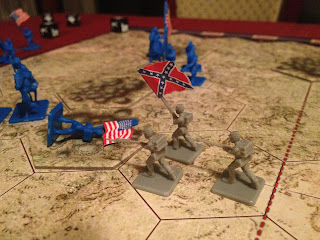 In the centre an artillery duel ended badly for the Confederates: 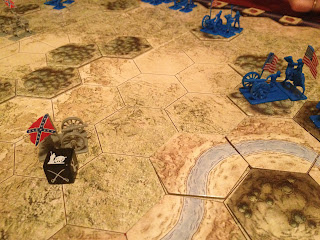 But on their left they were starting to force the Union back. Sadly, though, I was unable to turn die-rolls into solid kills: 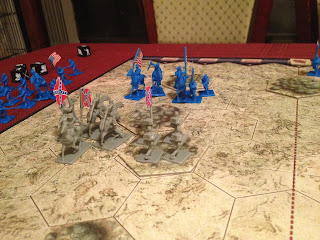 The battle on the Confederate left swung back and forth: 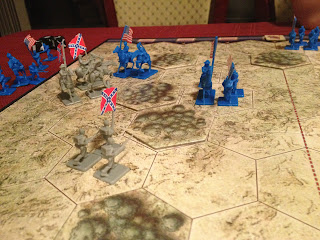 And meanwhile the Confederate right swung into action: 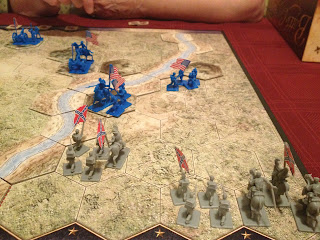 It pushed closer to the Union line: 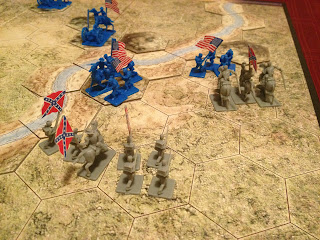 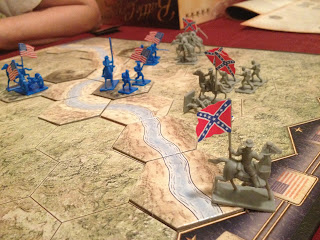 Magnanimous in victory, Catherine offered a rematch, with us swapping sides. I didn't take any pictures of this game, concentrating as I was on trying to win it whilst not conceding too may units, so I could claim an aggregate victory.

Basically Catherine opened the same way I did, with an attack on the Union right. But I swiftly counter-attacked, and kept going, rolling up the Confederate left in totality and driving pretty much to her baseline. In the centre her initial push was held, and on my right I was able to establish a strong line on the hills and behind the river, which held her back. In the end I pretty much reversed the result of the original battle, folding her line back on itself. I won it 6-2, giving me a 10-9 victory on aggregate.

In this picture General Hardee is shot down as he flees across the river: 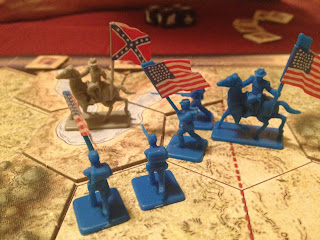 And here's the final position. A lot of Union units had taken casualties, but judicious use of cover had prevented their destruction. The Confederates were pretty much forced back onto the position occupied by Breckinridge at the start of the battle: 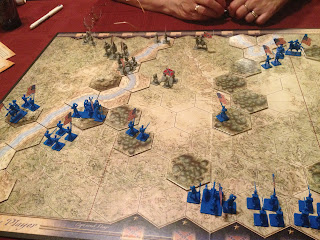 Both games were closer than they looked, and great fun. And what a great way to spend the last evening of the year.