The Battle Of Galveston - Scenario And Setup

In October 1862 a Union flotilla under Commander Renshaw forced the evacuation and surrender of the port of Galveston in Texas.

On 1st January 1863, Confederate Major General John Magruder staged a surprise attack to retake the port. Confederate troops would attack the town, whilst two converted steamers, armoured with pressed cotton bales, would deal with the six Union warships in the harbour. The attack was a success. One Confederate vessel, the CSS Neptune, was sunk by Union gunfire, but the other, the CSS Bayou City, attacked, boarded and captured the USS Harriet Lane. Commander Renshaw attempted to come to the Harriet Lane's aid in his flagship, the USS Westfield, but ran aground. Renshaw negotiated a truce, during which he attempted to blow up the Westfield. A first attempt failed, and a second attempt to blow it up led to a premature explosion that killed Renshaw. The rest of the Union vessels left the harbour under the flag of truce. With support from the gunboats in the harbour disrupted, the Union troops in the town were forced to surrender.

I thought that this action would be a fun one to try using Bob Cordery's Portable Naval Wargame, The idea would be to concentrate solely on the ships, with the land action being abstracted, but affected by events in the harbour.

In practice the actual battle involved a surprise attack on a couple of Union ships, followed by a truce and the Union withdrawal. This doesn't make for that interesting a game. However running it as a straight fight pits two Confederate gunboats against six Union vessels; this would not give much of a game for the Confederates.

What I decided to do was allow the Union to be more active than they were in the actual engagement, but then tie one hand behind their back to offset their numbers. To this end, whilst they have six ships they also have two disadvantages. The first is that they don't know the harbour as well as the Confederates do, so are obliged to move more slowly or risk going aground. Secondly, whilst they have the ships to easily overpower the Confederate vessels, they must use at least some of them to support the Union land forces, or risk the town of Galveston being recaptured.

For this game I used the Portable Naval Wargame, with a few minor changes/personal clarifications:

(i) Fore and aft gunnery strength was calculated by working out how many dice at full strength the ship could fire at that range, then halving the number (rounding fractions up). In this way the ship still gets to fire at full range, but at reduced strength.

(ii) A vessel rams by attempting to enter a hex containing an enemy vessel, but does not physically enter the hex. On the turn after the ram/collision, both vessels are limited to a speed of 1 and may not ram each other. A vessel which has not moved this turn cannot move on the turn it's rammed.

(iii) I have added some risk to ramming. For each '1' you roll, reduce the number of dice a vessel rolls when ramming by 1, down to a minimum of 2. From then on each '1' you roll causes 1 point of damage to the ramming ship. In effect a ship with a ram bow will lose its benefits after rolling two ones, whilst a ship with no ram bow will always take damage when rolling ones.

(iv) Destroyed vessels are left where they are, blocking movement and line of sight.
.
The Confederates have two vessels, both converted steamers:

Both ships are equipped with rams. I'm not sure if they were historically, but they seemed willing to ram so it can be assumed to be willingness as much as equipment. In addition it can also represent the fact that both vessels carried sharpshooters and boarders; a vessel 'sunk' by ramming could be considered, for game purposes, to have just surrendered or been boarded.

The Union have six vessels, a mixture of purpose built warships, converted ferries and a captured Confederate yacht::

In game terms the ships are all gunboats, with a FV of 4, gun strength of 3 and movement of 3. I ignored the rule about ships fleeing the field when they reached their critical point as, quite frankly, getting a ship to its critical point is very easy and would make for an extremely short scenario.

There are two special rules in use - Running Aground and Supporting The Galveston Garrison.

Union vessels may run aground if they are moving too quickly and/or close to shore. This represents a lack of knowledge of the harbour along with unreliable pilots. When a Union vessel wishes to move, it must declare at what speed it intends to move this turn. Roll a D6.

If the vessel is attempting to move at Speed 3 and is also within 2 hexes of land, then it will run aground on a roll of 1-2.

A vessel which runs aground does not move that turn. On subsequent turns, when it comes to move roll a D6. on a 5-6 the vessel breaks free, and may move that turn at Speed 1. On a 1 the vessel is permanently aground and must roll another D6 - on a roll of 1-2 the crew abandon and or burn the vessel, otherwise they continue to fight it. Subtract 1 from this roll for each other vessel lost or permanently aground. Subtract a further 1 if Galveston has fallen to the Confederates. Note that a vessel that is permanently aground counts towards the Confederate victory conditions whether it is burned or not.

The Confederates do not have to roll for running aground. It's assumed they know the waters and that their vessels have a suitable draft.

Each turn, after the gunnery phase but before movement, the Confederate land forces will assault Galveston. They will do so with a attack strength of up to 4 each turn; accumulate the total attack strength which has been brought against the garrison. If it reaches 8 then the garrison surrenders and the Union have lost Galveston.

On the turn after the Confederates capture Galveston they may site shore batteries. These allow them to fire as if they were a gunboat (3 dice) from each of the two Galveston town hexes. The Union can fire back, of course - the batteries have a FV of 4.

The Confederates win by scoring 4VP. They score 1VP for each Union ship that is sunk, captured or permanently aground (whether it has been adandoned or not), and 2VP if the town of Galveston is captured.


I fought this battle on a 14 x 11 hex grid, with cork-tile hexes representing the land. Galveston was represented by some scratch-built buildings I made to go with my 6mm ACW troops.

The eight vessels in play are 1/1200th models, mostly from Navwar, but with a couple of resin interlopers from a long-defunct company called Zodiac Miniatures, who produced a small range of ACW ships back in the early 1980s.

Here's a shot of the provisional setup: 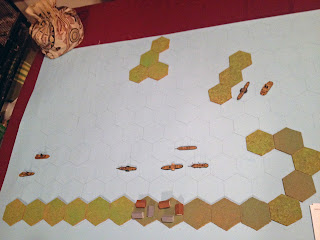 In my excitement to play I forgot to take an overall picture of the final table. The only major difference, though, is that I shifted the two islands over a little to make the channel wider. Galveston can be seen at the bottom of the map, and the Confederates are entering from the left.

The main Union force is off the port itself. The Harriet Lane is on the left, with the Sachem and Corypheus astern of it. Beyond them is the gunboat Owasco: 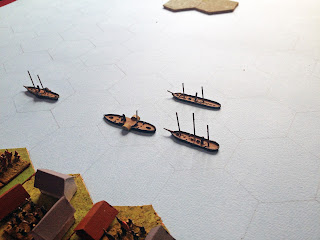 Close by Pelican Spit are the other two Union vessels. Inshore is the Clifton and next to it is the flagship, USS Westfield. 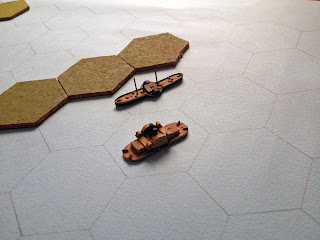 The Confederate cottonclad steamers - Neptune in the foreground and Bayou City beyond it: 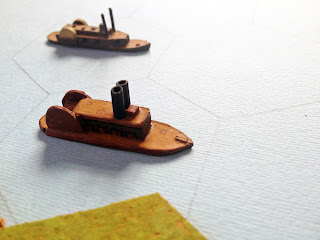 Finally, for visual effect more than anything else, Confederate troops storm the town, occupied by a small Union garrison. In fact I used the number of Confederate bases to indicate their current attack strength: 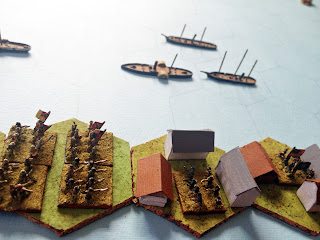 I played the scenario through three times today - the 150th anniversary of the battle, and took photos. However I will leave the results, and the dramatic finale, for another post, as this one is quite long enough.