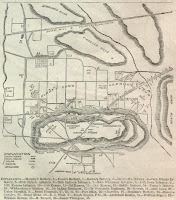 Today is the 150th anniversary of the Battle of Prairie Grove, one of the larger actions fought in the Trans-Mississippi theatre of the American Civil War. A Confederate force, under Hindman, attempted to destroy a similar-sized Union army in detail, it being split into two parts. One part, under Herron, force-marched to the battle, and actually engaged the Confederates first, before the force they were actually relieving got into action (after marching to the sound of the guns).

I have fought this battle using Fire and Fury in the past, but Caesar and I went for the quicker and simpler Battle Cry. He only has the first edition of the game, so we used a scenario downloaded from the 'net (which looks like it might be based on my own Fire and Fury scenario, or, at least, based on the OOB and map I based mine on). The second edition of Battle Cry does have a Prairie Grove scenario, but I'm not allowed to open my copy of it until Christmas ...

We used extra tiles from Memoir '44 to make up the hills and rivers that were needed. And, to make the game look extra nice, we used my 6mm figures, rebased, in part, to be used as Battle Cry pieces.

I took a few photos of the first game, but since I have limited internet access at the moment I'll hold off on posting them. Here's a taster, though, showing the view from behind the Confederate lines in the early stages of the second game. The Confederate centre is just starting to move off the ridge, whilst Caesar has positioned some artillery in a wood to cover the advance of his right: 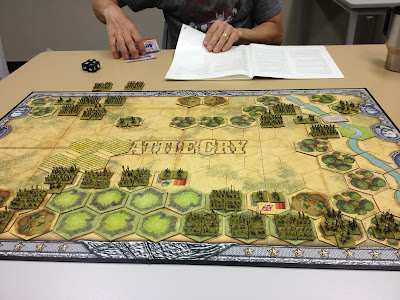 We played the game twice, swapping sides after the first game. In the first game I took the Union, and started well, with an aggressive assault using Blunt's troops on my right; two Force March cards in a row put me right into the Confederates before they could respond. Sadly my combat dice were appalling, and my strike achieved nothing in the way of casualties. Caesar moved troops into the fields on that portion of the battlefield, and came off far better in the ensuing firefight. Meanwhile on my other flank he used his cavalry to strike at Herron's command, scattering the artillery and some infantry. This gave him a 6-2 win.

In the second game I took the Confederates. Caesar's advance was slower than mine, and I was able to shift some artillery to better cover my centre. I then moved off the ridge to occupy the fields. Just as Caesar moved his troops up to attack my positions there I drew the Fortifications card, and was able to dig-in, giving me a strong position from which to launch counter-attacks. On my right I used the cavalry aggressively  destroying some of Herron's command and holding his force back. A steady dribble of Union casualties gave the Confederates another victory - 6-1 this time, giving me an aggregate 8-7 win.

Both games were good fun, and looked glorious with the 6mm figures.