I am still adapting and modifying the Portable Wargame to create the kind of miniature American Civil War game I want to play. Having rejigged the close combat system and added the disorder markers I have been looking at how to better integrate the two. In the last version I documented a unit which takes a disorder marker also retreats. This makes it hard to launch decisive close combats, in that you march up to a unit, fire at it to disorder it but also see it retreat beyond close combat range. I tried some variants in the turn sequence, but they weren't satisfactory. What I am currently working on is changing how units take hits, and adding a new phase into the turn ...

Now, when a unit takes a hit it automatically takes a disorder marker. You don't dice for the effect of a hit; that's it - a hit equals disorder. If you take a hit in close combat you also retreat one space.

At the beginning of your turn, before you move units, you must roll a D6 for each unit with a disorder marker. Modify as follows:

Effectively instead of resolving all combat results in the opponent's turn, some of the effects are dealt with in your own turn.

I have developed and tried out these rules in a few simple test games in odd moments, but this evening I decided to put them into action in another refight. I chose First Bull Run.

I went for one unit equals one brigade (roughly) which gave me:

All units were poor, except the cavalry and one infantry unit on each side (Jackson's and Sherman's) which were regular. 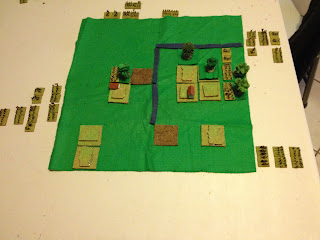 The Confederates are to the right and the Union to the left, with a few units on each side entering from the top (Bull Run and the stone bridge lie that way). I worked out a reinforcement schedule which would feed in troops over about twelve turns, assuming the game lasted that long.

The Confederates started with some units already on the table.

Both sides had one leader (McDowell and Beauregard), who entered with the first lot of reinforcements. They were slightly reduced in ability - whilst they could help rally adjacent units, they could only give combat bonuses to units they were with.

The second turn. The Union are massing troops against Matthews House Hill, defended by Evans' Brigade. So far no-one has scored any hits, but McDowell is having a go at directing the artillery. In the distance you can see other Confederates on Henry House Hill: 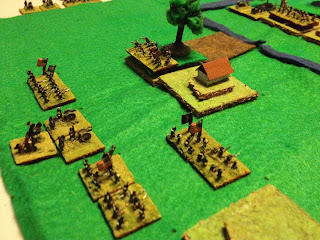 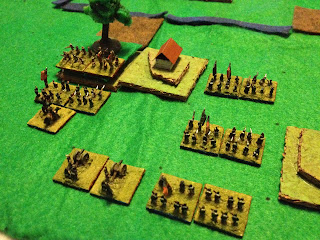 And Evans retreats. In fact he kept retreating each turn until his brigade left the table. 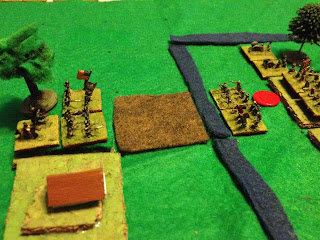 The battle begins to develop. The Union are advancing towards Young's Branch, whilst the Confederates try and establish a defensive line. In the far top-right Jackson's brigade and Beauregard have just entered: 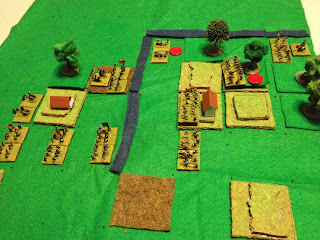 Disaster! As McDowell leads a brigade towards the stream he is decapitated by a cannonball, and the unit he is with is disordered. 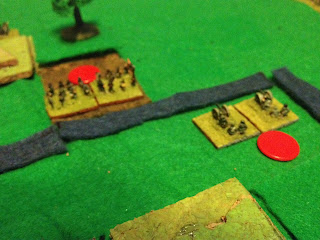 Troops are now moving in on the Confederate right. The rebels have pulled a unit back from defending the crossing, whilst Sherman's brigade has now crossed Bull Run and entered the battle. In the centre Confederate musketry and artillery fire has slowed the Union advance: 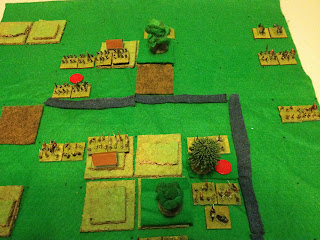 Sherman's Brigade come under fire, and routs off the table. Oh dear: 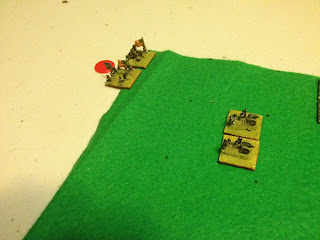 The Union surge across Young's Branch and attack the Confederate centre: 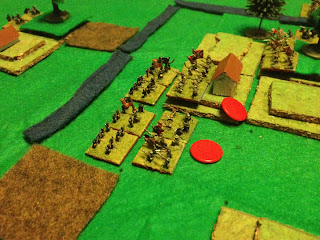 This has mixed results, but the Confederates lose another unit whilst the Union just fall back. 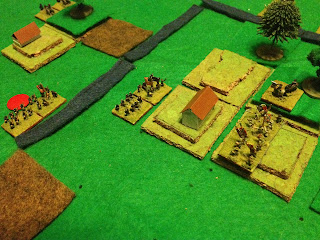 The Union keep up pressure on the Confederate right too, using artillery to drive off the infantry there: 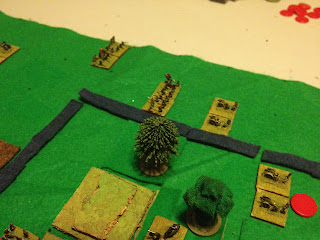 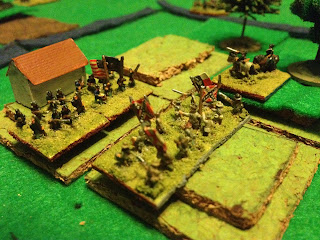 Stuart's cavalry lurks on the Confederate left, looking for some Zouaves to attack ... 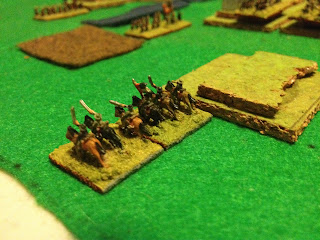 As the Confederate army reaches its exhaustion level, Skedaddle Jackson falls back: 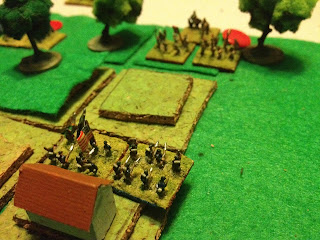 The end. The Union control the centre, whilst both sides artillery are lining up for a duel on the Confederate right flank. Stuart holds the left, and would probably be covering the Confederate retreat. Off table, at the bottom of the picture, are the Confederate units that never made it into the game: 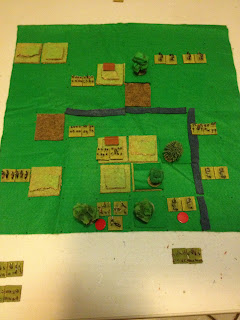 The rally mechanism works fairly well, but possibly needs some small tweaks. I don't know whether to allow a unit that retreats to still move in the movement phase (this would favour defenders, as their units would fall back, but then reoccupy their original position if they chose). I may also add in a +1 modifier to the rally roll  for an adjacent, undisordered (at the start of the turn) friendly unit. Rallying was hard in this game, although with most units being poor it was maybe to be expected.

Still, it was a fun refight.

Update: I had a second go before bedtime. Again, it took twenty minutes to play and lasted 9 turns, ending in a resounding Confederate victory, with Evans putting up a stouter defence to start with and Confederate artillery on Henry House Hill proving very deadly. I tried the +1 rally modifier for supporting units, and that worked OK, but I decided to allow units that retreated to still move in their turn as it's one less thing to remember. The high point of this game was a final Confederate charge that saw both Beauregard and McDowell shot down within a square of each other. Jackson did very little, except bolster the Confederate right, and Sherman pretty much fled at the first volley again.
Posted by Kaptain Kobold at 07:00