The Battle Of Valverde

Today I had the first chance to try out a game with my rebased 6mm ACW figures. Once again I wanted to try Bob Cordery's Portable Wargame rules, but I also decided to try them on a square grid. I don't have a green square grid, however, but I do have a suitable sized chessboard. And the colour of the board is perfect for at least  two small American Civil War battles - those of Sibley's New Mexico campaign of 1862.

Since I had a reasonable amount of information available for it, I decided on the Battle of Valverde, which was fought on the banks of the Rio Grande on February 20th/21st 1862.

Shall I bore you with an account? No - here's a LINK.

I used the Late 19th Century Portable Wargame rules, with the following changes.

(i) Artillery rolls to hit like any other unit; 5-6 with a +1 for an adjacent Commander and a -1 if the target's in cover. I gave it a range of 6 squares.

(ii) Cavalry can mount or dismount and move 1 square. Dismounted cavalry shoot at a range of 2 squares.

(iii) I wasn't sure how the turn sequence for movement, firing and close combat is supposed to work, but for a given side I moved all units, fired all units and then resolved any close combats.

(v) I combined multiple firing into one roll. If more than one unit shot at a particular target I worked out the roll that gave the best chance of a hit. Each other unit that could shoot gave a +1 on the chance to hit. In other words, a unit could only be hit once per fire phase. Given the rather instant-kill nature of combat in the Portable Wargame this seemed fair.

(vi) I set the Exhaustion Level to 50%, because American Civil War battles just seemed to work that way.

The Confederate Army of New Mexico consisted of a Commander (Sibley or Green, depending on what phase of the battle it is), six regular Cavalry units and a regular Artillery unit: 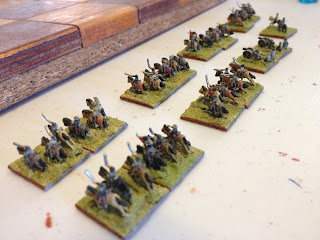 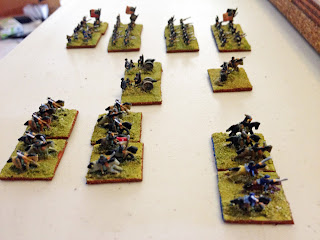 This gave both sides an Exhaustion Level of 4. The Confederates were slightly outnumbered, but had an edge in quality and speed.

The battlefield, being a chessboard, was an 8x8 grid: 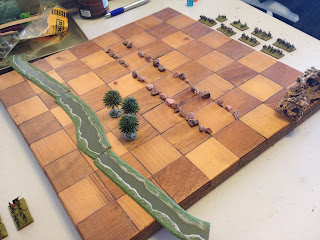 The Union enter from the left, the Confederates the right. The river (the Rio Grande) was fordable along its length. There was a two square grove of trees, and the rocks marked a dry river-bed which, whilst not blocking line of sight, provided cover to units in it. In the far corner was an impassable mesa.

Both sides started the battle with two cavalry units on their baseline. At the end of each of their turns they could place two more units on the baseline, ready for use on the next turn. The commander could be placed with any entering unit on a turn of the player's choosing. 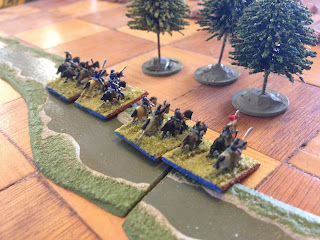 Both sides advance, the Confederates moving to occupy the dry river-bed: 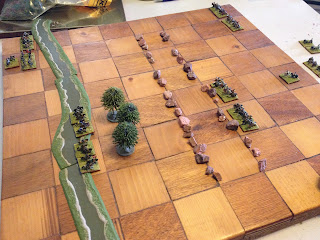 The two cavalry forces dismount and start shooting at each other: 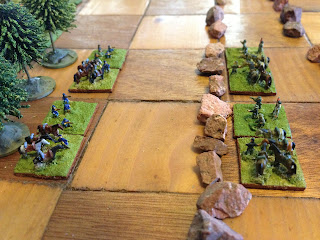 Meanwhile over on their left more Union cavalry cross the river, supported by the New Mexico militia, and led by Canby himself: 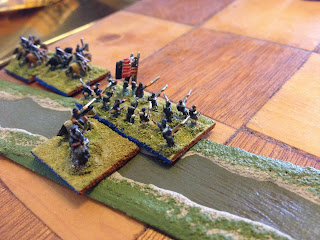 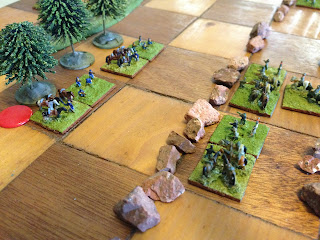 More units have entered, and the Union have established a firing line everywhere but on their right. However the Confederates are not strong on that flank and can't exploit the weakness: 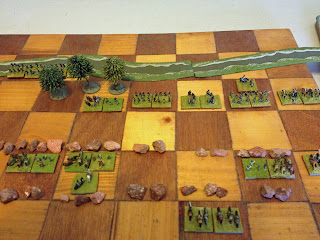 A Confederate unit retreats from the river-bed: 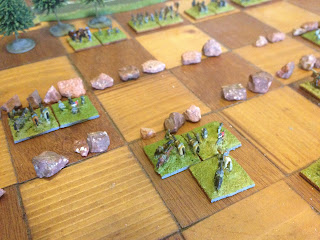 Whilst another is routed by artillery fire: 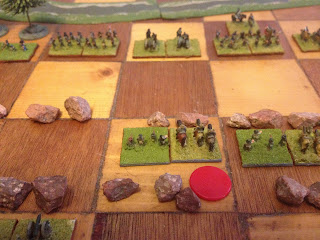 Led by their commander, the two Confederate units on their left cautiously advance in an attempt to take the grove of trees: 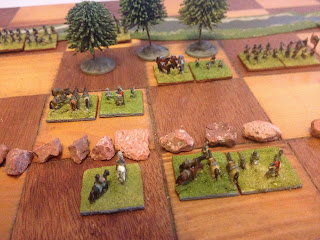 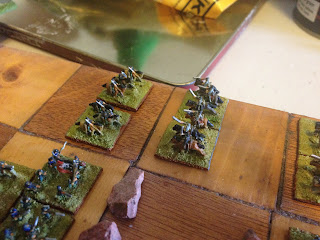 Both units take a hit, the Union cavalry retreating but the Confederate cavalry routing: 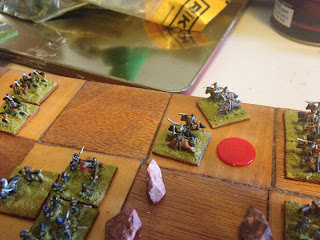 The Confederates on the left have fallen back to the river-bed again, but their firing routs a unit of militia: 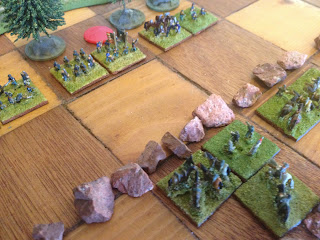 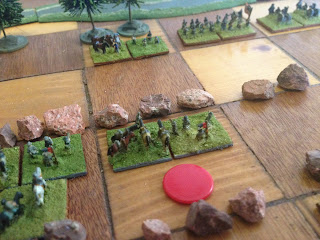 On the Confederate left the Union cavalry push forward again, and rout another opposing unit: 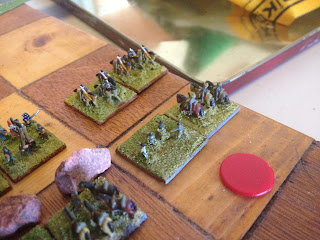 This last loss pushed the Confederates over their Exhaustion Limit. Spread thinly along the dry river-bed, and with both of their flanks in danger, the Confederate commander ordered a withdrawal: 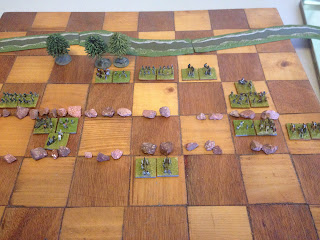 The Confederates had lost four units and the Union two.

Mostly I found the game worked well, but I'm still not happy with the close combat mechanism which leaves cavalry mostly fighting inconclusive duels, and or which can see both sides routing or retreating. I shall continue to look at an alternative I think.

Anyway, it was fun refighting one of the lesser-known battles of the American Civil War.

Extra: An unphotographed repeat run of the battle this afternoon saw a decisive Confederate victory, with the Union losing four units and the Confederates one (and that only after the Union had reached its Exhaustion Point.)
Posted by Kaptain Kobold at 08:00