Yesterday afternoon I found some suitable felt and bits of cork tile, and put together an 8x8 square grid suitable for fighting Portable Wargame ACW battles outside of New Mexico. This evening I christened it with another refight - the Battle of Cedar Run, fought on 9th August 1862.

Here's Wikipedia on the subject.

And here's my setup: 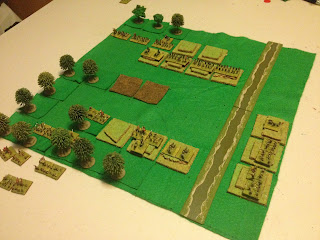 In the foreground are the Confederates, emerging from the woods. The union are in a line along the far ridge. Cedar Run crosses the board and there are some troops on Cedar Mountain to the right. The squares are 5cm, the terrain pieces slightly less than that. I don't think I've said, but the figures are mostly 6mm Heroics and Ros, with a few Irregular Miniatures thrown in (the artillery particularly).

Here's a close-up of the Union forces: 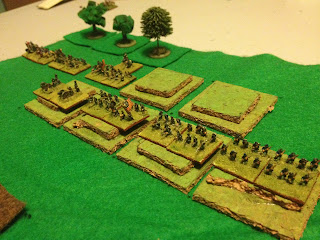 They had five units of infantry, a unit of artillery and a unit of cavalry. All were regular, aside from two of the infantry units which are poor. They are led by Nathaniel Banks.

And the here are the Confederates, led by Stonewall Jackson: 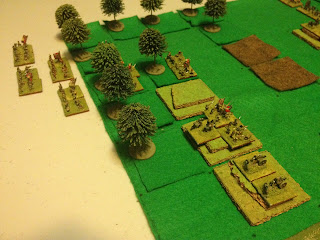 They have eight units of infantry and a unit of artillery, all of which are regular.

Across Cedar Run is Cedar Mountain, which is occupied by Confederates: 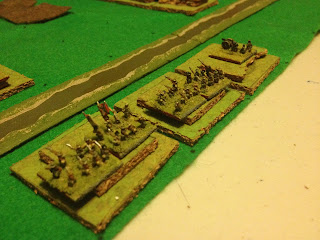 The infantry are for show - in the actual battle they didn't contribute until right at the very end. The single gun didn't count as a unit, but gave a +1 to any Confederate artillery fire it could support by having the target in range and arc.

And so the battle began ...

Right off I got to use a new(ish) rule I wanted to try out to increase unit survivability - demoralisation.

Demoralisation has no effect on a unit, but if a demoralised unit is demoralised again then it is destroyed.

At the beginning of each player's turn, before they move troops, they roll a D6 for each demoralised unit. There is a +1 if a commander is adjacent and a -1 if the unit is in front of an enemy unit.

On a 4 or more the demoralisation marker is removed.

Basically units are harder to kill outright, but easier to kill by a sustained attack. That's the theory anyway.

With that in mind, the first shot of the game, from the Confederate artillery, demoralised some poor Union infantry: 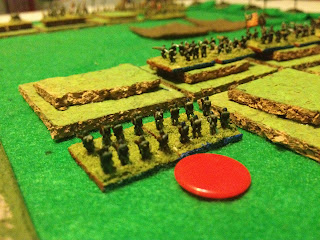 And so the battle went. Banks led a Union advance on their right, to take the woods before the Confederates did: 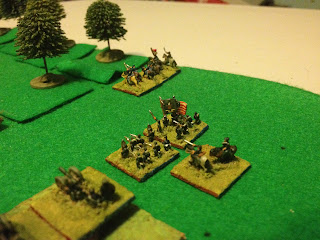 The Confederate troops begin to mass: 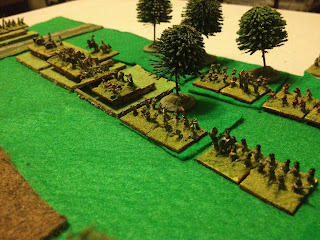 They lose their first unit to artillery fire ... 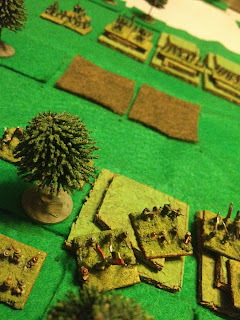 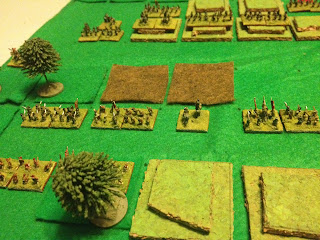 The Union left starts to disintegrate under Confederate artillery fire: 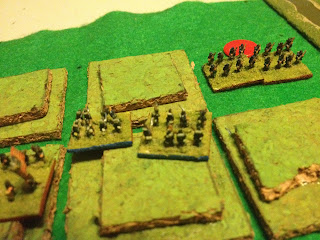 Banks gets into position on the right as the first wave of Confederates swarms through the woods: 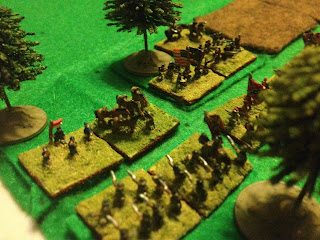 And the rest of their infantry strengthen the position on the ridge against a Confederate probe: 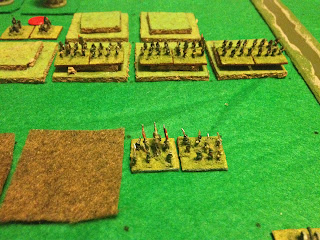 The probe was driven off by musketry, and the Union boys advance: 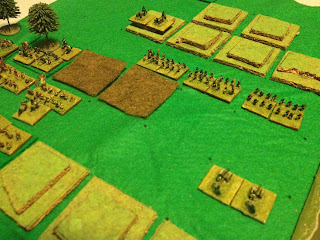 On their left the Confederates attack in strength: 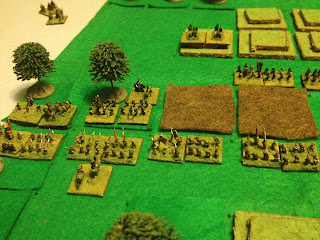 Disaster! Banks is shot whilst trying to rally some retreating infantry! The Union are leaderless! 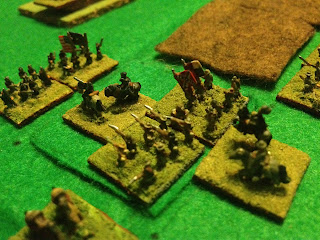 I should say at this point that the demoralisation rules don't apply to commanders - a commander who is hit is killed/captured on a 1-2, otherwise retreats one space.

The Confederates shift troops to their right in order to slow the Union attack there. Note the demoralised Confederates hiding at the back whilst they are rallied: 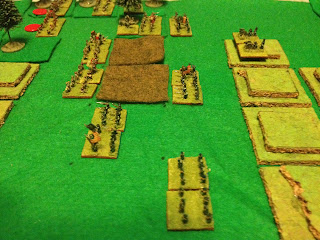 Bayard's Union cavalry is outflanked and routed before it can mount up and ride to safety: 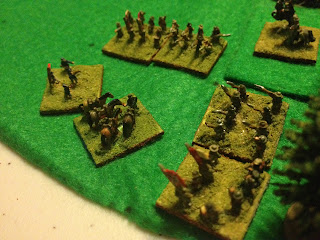 With Banks gone there is nothing to hold the Union forces together, and they retire to the ridge, exhausted and demoralised. 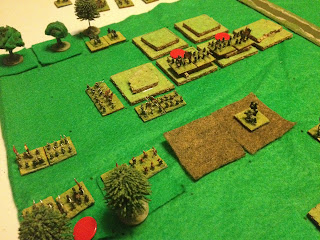 The actual battle was fought in the late afternoon/early evening, so I decided to put a time-limit of six turns on my refight. The final picture is the position at the end of those six turns - the Union are down to three units, whilst the Confederates are still viable, having only suffered a loss of two units. The refight was a fairly decisive Confederate victory.

The new terrain played well and didn't hinder the game, whilst the alternative hit rule kept units in the fight longer, whilst adding the decision of what to do with demoralised units - withdraw them until they rally, or risk them being hit and destroyed. I shall try it out in some more games.