I continued my testing of some of the changes to special rules in Mighty Monsters last night, but took the opportunity to test some changes to the damage system for mechas. This is mostly tidying up some grey areas that occur when you have multiple pilots, as well as making a knocked out pilot less of a show-stopper. However I have also tweaked the damage effects so that all of the malfunctions can be recovered by spending actions, instead of some of them automatically lasting for a whole turn. This is firstly because 'one turn' is harder to adjudicate in multiplayer games, where the turn sequence is a little more random, and secondly because being disabled and vulnerable for a whole turn is pretty much game over for a mech. Essentially a damaged mech will now have to waster some of the actions it gets repairing and resetting systems, which kind of makes perfect sense. It gives some purpose to parts with no attacks or even a game use (some mechs have a head which does nothing in game terms, for example); you can now use the actions from those parts to reset things and avoid wasting actions from essential body parts.

I set up an all-mechanical game - two jaegers (Crimson Typhoon and Gipsy Danger) were defending an oil-refinery against an attack by Mecha Khan and Kajutiajuq. I'll post all of the stats below. 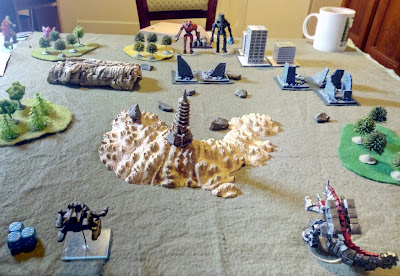 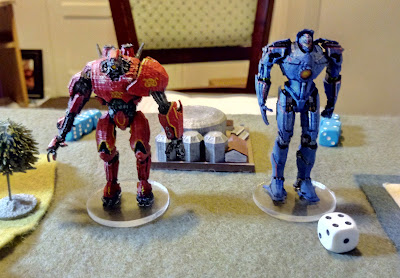 The first couple of turns were slow; both sides pretty much failed their activations on the first roll. However Mecha Khan drew first blood, damaging Gipsy Danger with its long-range missiles. 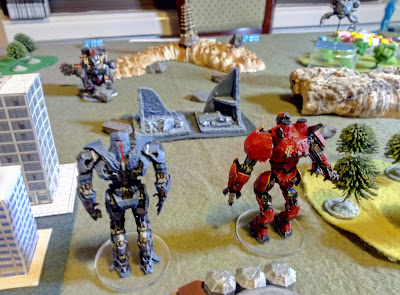 Kajutaijuq is uniquely designed to do well in this scenario, having high-speed hyperflight. As all the other mechs bumbled around railing activations, it slipped round their flank and attacked the oil-refinery, destroying it. 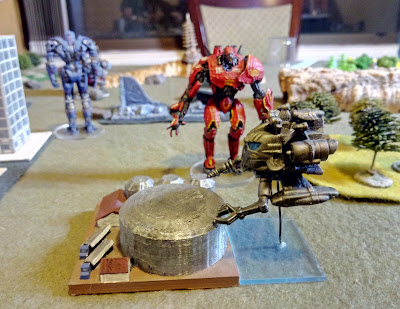 However the scenario also requires the attackers to destroy at least one defender, so a fight was inevitable. Crismson Typhoon moved quickly, grabbing Kajutaijuq and then attacking it with its numerous blades. Kajutaijuq responded by breaking the grapple, and catching Crimson Typhoon in one of its own. 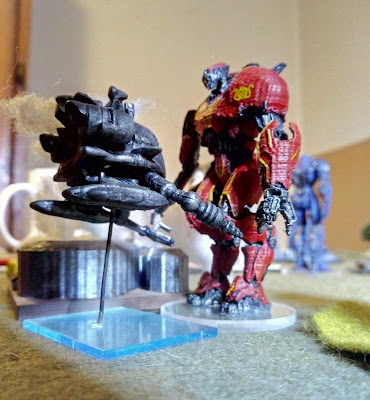 Kajutaijuq tried to maneuver Crimson Typhoon to where it could throw the jaeger at Gipsy Danger. 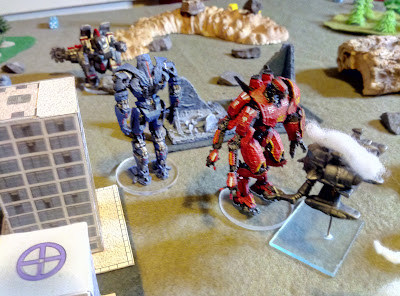 Meanwhile Gipsy Danger was under fire from Mecha Khan's lasers, and took some more hits. Gipsy Danger still hadn't really got its act together. 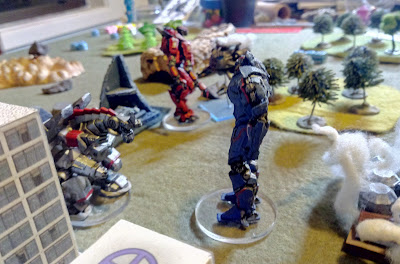 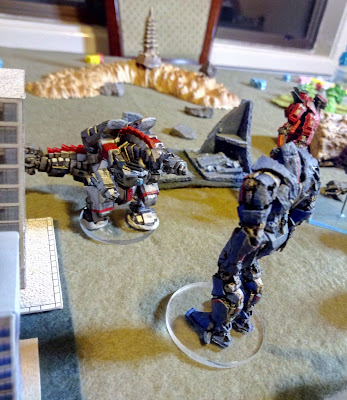 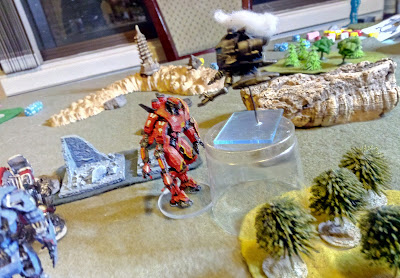 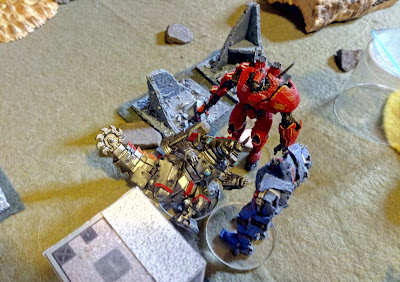 Then they both turned on Kajutaijuq. The flying head was so badly damaged that its flight systems were malfunctioning, and it couldn't get the activations to move. It did get off a shot with its concussion blaster, however, hurling Crimson Typhoon into some ruins. This actually killed one of the pilots, and knocked the other two out, but they quickly recovered (aside from the dead one) and got the jaeger back into action. The two then jaegers fired their plasma blasters at it until they ran out of power, inflicting so much damage that whilst Kajutaijuq was still active, it was obviously out of the fight. 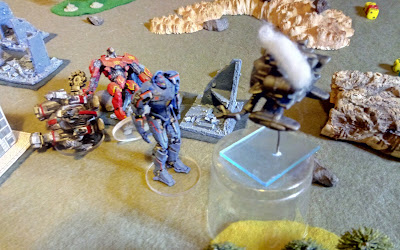 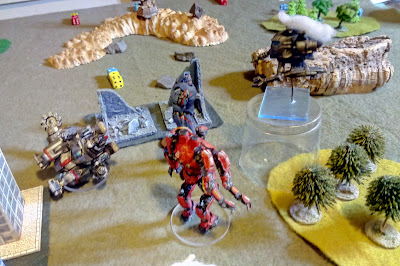 So despite losing the oil-refinery, the jaegers had won, with both of them still standing at the end. Here's all four combatants with their final damage dice - blue dice are the starting dice, yellow the first level of damage and red the serious damage. 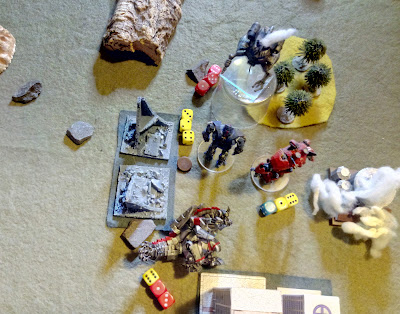 The damage rules worked well; all I had to record were how many actions each mech needed to spend reactivating things, and what the effect was if they didn't. Changes to the pilot rolls meant that unconscious pilots did get to recover, keeping the mechs in the game. Playing mechs now becomes a more of a game of managing activations, instead of standing around being vulnerable for long periods of time.

(Block is a new ability I'm testing as an alternative the Martial Arts in 'Mighty Monsters'.)
Posted by Kaptain Kobold at 11:23