Advent Of The Triremes

That seems an odd title for a post which is about the first game using my 'biremes', but stay with me.

So, Tyre and Sidon are at war. Sidon has sent six of its best warships along the coast, but Sidon sends six of its own ships to intercept them And Tyre has a surprise. Half of its force are 'biremes', like those of Sidon, but they have three new larger ships - 'triremes'.

The two squadrons approach. Tyre (red) leads with its biremes; the triremes out of shot to the left. Sidon (yellow and blue) forms a line abreast between two islands. 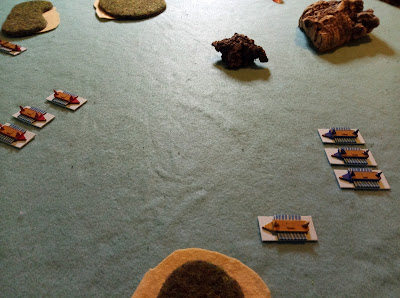 Tyre's triremes work their way onto their left flank. They are less agile than the biremes and take longer to move into position. The two forces line up against each other. 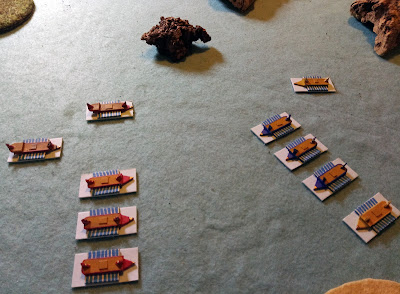 Sidon seizes the initiative, and attacks, smashing into Tyre's biremes, and one of the triremes. 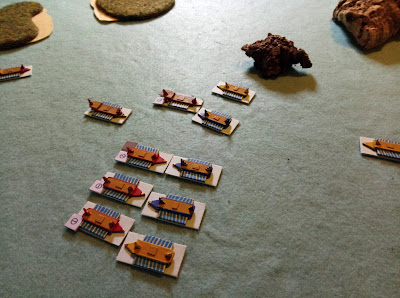 Battle is joined in earnest. Tyre responds to the attacks by grappling the ships of Sidon, and boarding, and a series of fierce melees break out along the line. A second trireme comes up, smashing one of Sidon's biremes. 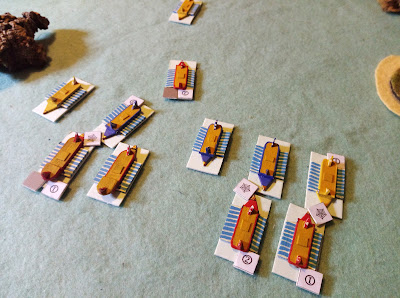 Later in the action. All ships are in combat now. The higher combat power of the triremes is beginning to tell on  Tyre's left, and they rain down archery on the less numerous crew of the biremes. But Sidon't initial attack has give the edge on their left, and Tyre's three biremes are suffering badly. 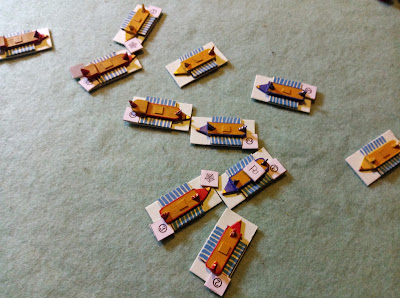 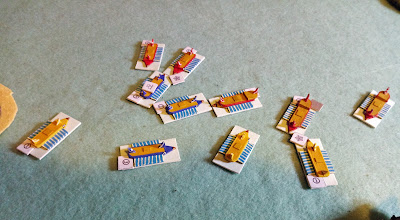 The end. Tyre's left collapses as all three of the biremes sink or surrender. Sidon has also sunk one of the triremes, and another is crippled. Sidon lost two ships sunk and one captured, with another crippled. So a pyrrhic victory for Sidon. 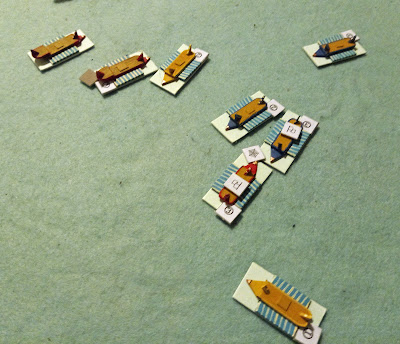 Both types of ship are roughly equal in value; the higher combat value of the trireme is offset by the better quality of the bireme (which gives it more activations). In Galleys & Galleons the combat value plays little part in ramming; a vessel gets a small penalty when ramming a vessel with a higher combat factor, but that's it, so possibly the higher combat factor isn't worth as much. Obviously it scores in boarding actions and when using archery (small arms fire).

I may try an all-trireme force against an all-bireme one to see how the relative differences play out.
Posted by Kaptain Kobold at 20:31